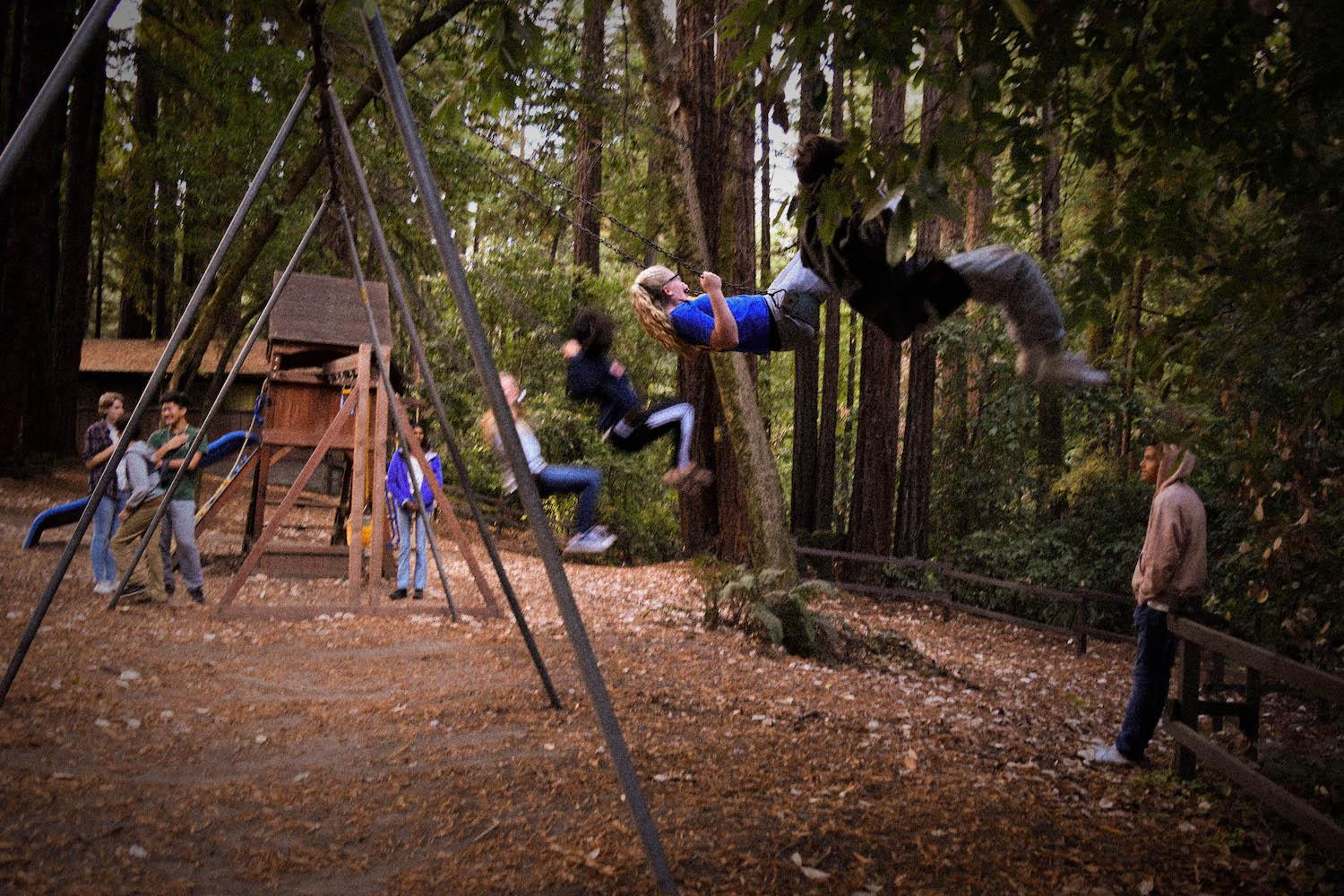 Students embarked on what was marketed as a life-changing leadership experience. But they may not have gotten what they signed up for.

It’s dinnertime. Palo Alto High School senior Nura Mostaghimi knows not because she sees the food on the table or her friends bent over their plates — she can’t, her eyes are covered — but because she recognizes the sound of hungry mouths being fed beyond her blindfold. Not her own mouth, of course — she’s still waiting for a pair of benevolent hands to fill her growling stomach. “They” didn’t force this handicap on her — quite the opposite, actually. Instead, Mostaghimi is simply participating in a simulation designed to emulate what it’s like to live with a  disability in the hopes it will to broaden her own perspective.

“There were different challenges they made you go through to see the experiences of people with different backgrounds and lifestyles,” says Mostaghimi, who attended Camp Unity two years ago. “[Also], how they acclimate within their day-to-day lives and how that affects who they are.”

Over the course of the next three days in the Santa Cruz mountains, she and nearly 80 other high school students will participate in activities akin to this as they listen, laugh and cry together.

At camp, tears are shed for a variety of reasons: anger and acceptance, grief and reconciliation.  But by the end, it’s almost as if neighboring faces are illuminated in a different light.

Run nationwide, Camp Unity, Everytown and Anytown are among the many leadership-development retreats that have been around for decades. Hundreds of Paly students have attended various iterations of such camps since the early 2000s, but Paly hasn’t participated in the camp since March 2017 due to budget cuts says Principal Adam Paulson.

Despite lacking an umbrella organization, all Everytown-style camps operate with the same goal: to teach youth effective leadership by cultivating greater empathy. Each program seeks to build community by identifying and appreciating differences between individuals. How each program does this, however, differs by director. Recently, the lack of standardized curriculum has generated controversy over what some see as psychologically injurious methods.

“It was the accumulation of these trau ma inducing experiences day after day, hour upon hour,” de Sá says. “Just real manipulation and taking advantage of students while they were vulnerable.”

According to de Sá, it was not uncommon for students to collapse on the ground in tears, or even run out of the room, often taking refuge in the woods or their cabins. While counselors led small group discussions after each simulation to explain their significance, de Sá says it wasn’t enough. Emotions  often peak at the infamous “Gender Night,” where  students are separated into male and female gender affinity groups and instructed to brainstorm slurs for each gender. They’re then read aloud, uncensored — “slut” and “whore” are practically cliches. Occasionally, counselors even pitch in. “Gender Night always goes off the rails,” de Sá says.

According to de Sá, students stood in a rigid line  facing each other as they read out demeaning insults, the atmosphere almost comparable to that of a war zone. During one Gender Night she attended, counselors decided to tell horror stories after the emotional turbulence of the evening, even adding chainsaw noise effects from their phone.

Another activity instructs Latinx students to clean up after others, Jewish students to wear a Star of David in imitation of the Holocaust and Black students to use a colored-only bathroom. These activities are intended to demonstrate privilege, but largely miss the point, according to de Sá.

“Your methods have to match the goals,” de Sá says. “That’s [the activities are] subjecting kids who already experience discrimination to the same thing to teach the lesson. But for what?”

Schools like Paly have the resources to send trained psychologists from the school on trips like these. However, according to De Sá, many schools in less affluent districts don’t have the funding for to bring the mental health professionals, which poses a large problem when students need immediate help.

Even teachers with counseling degrees struggled to handle the sheer amount of emotional tension. AP U.S. History and Social Justice Pathway teacher John Bungarden, who volunteered at Camp Unity in March 2017, was shocked at how jarring  the camp program was for students.

“It’s a lot of confrontational-type stuff,” Bungarden says. “Some of that was pretty startling.”

To Bungarden the most shocking part was that none of the practices were psychologically backed with research. While several camps cite survey results to prove their effectiveness, these surveys were internally conducted by camp faculty, not trained researchers. According to the San Francisco Chronicle article, none of the psychologists interviewed  saw merit in the camps tactics. For Bungarden, the motives were clearly positive, but the experience didn’t live up.

“Was it transformative? That clearly is the intention … we used to send reasonably large cohorts twice a year to this thing,” Bungarden says. “You’d expect some of the attitudes that were supposed to be sanded down would be back here … and I’m not sure that I saw that over the years.”

Staff bias also presented itself as an issue among students at Paly. In emotionally evocative activities,  facilitator bias affected student takeaways, according to Mostaghimi.

“At times it got a little bit too much,” Mostaghimi says. “It felt more persuasive rather than informative. They [the counselors] definitely had to keep themselves more in check.” Especially on more delicate simulations, it was important for counselors to include everyone in group discussions in order to ensure maximum wellness, according to Mostaghimi.

“He [the facilitator] was biased towards a certain group … He would only call on people from a singular group,” Zoe Sid says. “There are so many flaws that I could pick out in the simulations, and I felt like I might’ve lost the point of the camp.”

The power of unity

A Camp Unity veteran of more than 10 years, Living Skills teacher Letitia Burton has seen the power of Camp Unity firsthand. She’s seen Paly students acknowledge their educational privilege, she’s seen advocacy on campus and she’s even seen it at the San Diego International Airport, where she and another airport-goer bonded over her orange Camp Unity t-shirt and the positive experiences they had at their respective camps.

As one of the main coordinators of Paly’s Camp Unity, Burton is responsible for publicizing the camp and reading applications to ensure a diverse range of perspectives.

Although Burton acknowledges that camp participants do experience pain and emotional anguish, she believes the intentions and takeaways of the activities are ultimately positive. More evocative lessons like the segregation activity are not meant to be simple, surface-level discussions. Rather, they guide students to consider present-day issues through the lens of “a more historical perspective,” Burton says.

“Nothing was designed to hurt people, but it does hurt, you know, because sh-t sucks … Racism in this country sucks. Sex discrimination sucks … People in the majority might have an intellectual understanding of that, but they don’t have a visceral understanding.”

With visceral understanding comes vulnerability — in order to support students throughout this process, Paly provided wellness professionals which Burton says were not well-represented in the Chronicle article.

“I hope that that article does not stop people from wanting to come to camp,” she says.

Coming together for the future

Tuyen Fiack, the executive director for Silicon Valley FACES, the non-profit that develops the curriculum for Camp Everytown, states that the basis for the camp lies on contact theory, a hypothesis that claims that one of the best ways to improve relations is through

experiencing conflict. FACES broke relations with Richard Valenzuela, the leader for Camp Unity, five years ago due to distance between California and Valenzuela’s home in Arizona. Both have been running individual leadership-style camps since.

“We don’t antagonize students,” Fiack says. “Our staff shares their own personal stories, so that students feel comfortable. We don’t throw out negative words.”

While both Camp Everytown and Unity share a similar curriculum, Everytown has modified many of their activities to ensure the camp stays relevant and inclusive. For example, Gender Night is now based on a spectrum. instead of just the “male” or “female” binary, and the segregation activity has been completely eliminated. This year,  the organization consulted a mental health professional to look through the camp itinerary to ensure best practices, which contrasts the self- survey policies of Camp Unity. Aside from a few minor tweaks, the itinerary has been approved by psychologists.

In spite of these changes, the mission of the camp remains the same: empathy through experience.

In response to the controversy surrounding the activities, Camp Unity organizes small group discussions afterwards, where students are given the opportunity to process their emotions, which led to deeper bonding, according to Mostaghimi.

“One of the things I was really happy about were the relationships I was able to build in the discussion circles and I’m really close with all those people still,” Mostaghimi says. “I think it’s a really powerful experience that allowed us to be more emotionally and mentally sensitive of people’s feelings.”

For Fiack, Camp Everytown’s goal of understanding is more important now than ever. And for the 35 Paly students attending Everytown this year from October 31st to November 3rd, she hopes they can see it as well.

“It’s important for students to understand the perspectives that are different from them, and that’s what camp does,” Fiack says. “They might not agree, but they can respect you as a person, as a human being.”