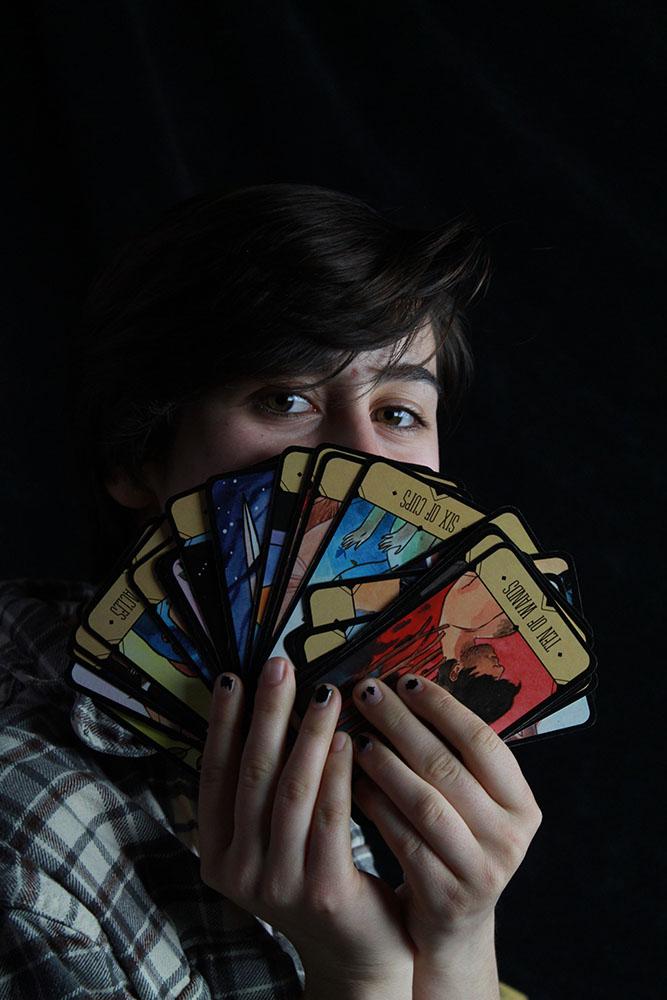 THE LOVERS. ACE OF WANDS. TWO OF CUPS.

Palo Alto High School junior Helen Noroian places three tarot cards on the grass in front of her, carefully inspecting each one.

“This feels like an initial ‘pow,’” Noroian says finally, explaining how the first card represents her subject’s potential love life. She pauses before moving on to the next card, which depicts a woman sitting in a throne surrounded by flames.

“There’s a lot going on there: There’s a lot of fire, there’s a lot of passion,” she says. The third card she analyzes quickly: “Then water, so things come and go, so it’s being washed away.” Noroian looks up from the cards and smiles, a glint of satisfaction in her eyes.

Noroian’s tarot cards are a form of divination traditionally used to forecast events or situations. According to the New York Times, tarot has recently garnered significant attention in popular culture, with tarot deck sales rising 30 percent in 2017. Some experts attribute this uptick to a declining interest in religion among millennials, as well as a national shift towards mindfulness. 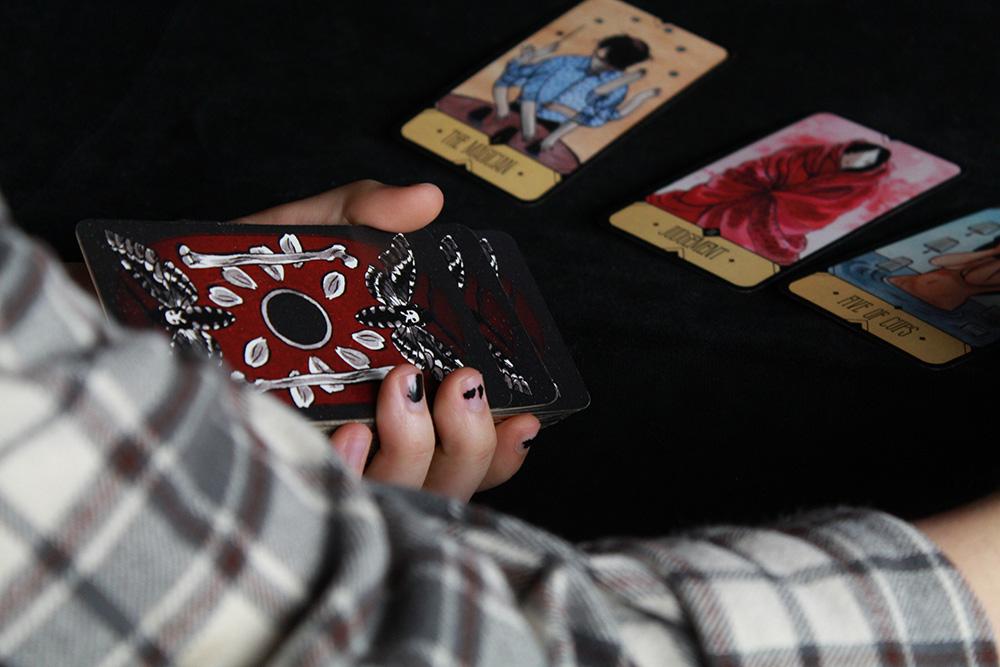 Junior Helen Noroian lays out her cards, preparing for a reading. Photo by Emma Cockerell

For Noroian, however, the practice of tarot card reading serves more as a vehicle for self-reflection than a form of incontestable fortune-telling.

Senior Sam Kim, who is in Paly Theatre’s stage tech alongside Noroian and was inspired by her to pick up tarot, agrees.

“It’s very self-reflective because it’s about what you feel in the cards,” he says. “For me a lot of tarot has been like, ‘now I’m just going to introspect in a way that is … different.’”

“The Two of Cups is love, duality,” Noroian says as she pulls the card from her deck. “Wands are intellect, logic — they just feel cold.”

Noroian shuffles her tarot cards with care, mixing them up but never letting them bend or warp.

“I don’t like to let a lot of people touch my cards all at once, because then all the energies get muddled,” she says. “Every person [has] their own perspective and their own way of reading.”

Noroian’s deck is simple in color, but detailed in design — some cards depict specific individuals or situations, others just icons. Each card is labeled, but Noroian says she only uses these names as suggestions for her interpretation.

“There isn’t a wrong way to do it [tarot card readings],” Kim says. “You just have fun and see what comes up when you’re looking at the meanings.”

To read his cards, Kim constructs a pattern where specific cards represent either past influences, current situations, future scenarios or advice.

“I feel my question go into the deck,” Kim says. “I ask the question and maybe it’s just me forcing it but it feels like there’s some sort of movement into the deck.”

Both Noroian and Kim concede that tarot is so compelling to them precisely because it allows them to craft their own meaning from the cards.

“You can learn each meaning of every card,” Noroian says. “But I think it’s more important to find your own understanding from each card and to look at the images and see what feelings are evoked from that image.”

It’s not all in the cards 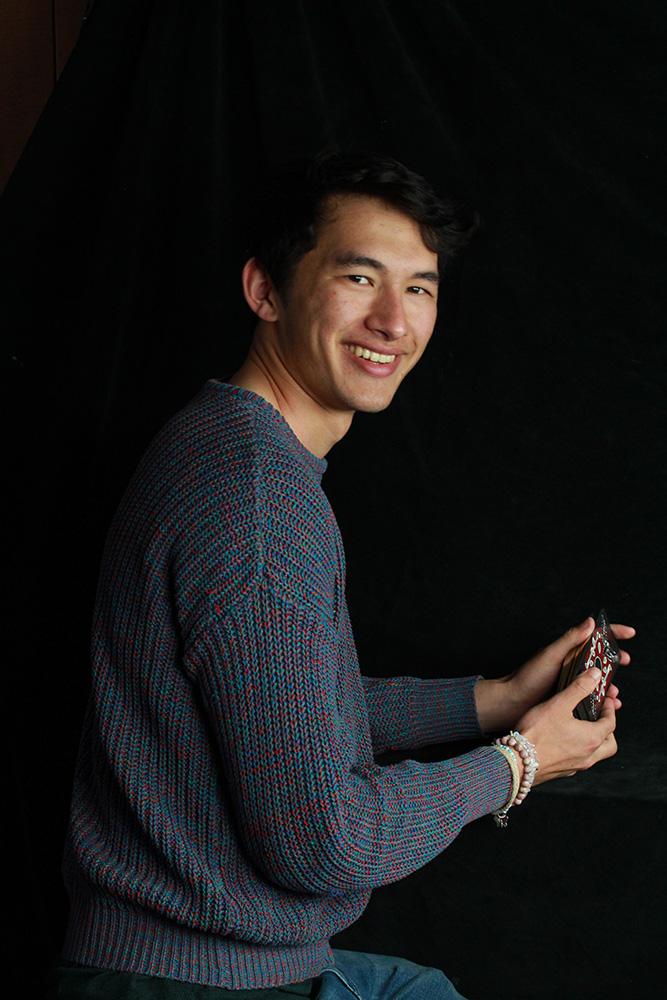 Despite the common misconception of tarot being used by witches or psychics to see into the future, both Kim and Noroian primarily rely on tarot as a way to clear their minds and reflect, and are skeptical of their decks’ supernatural or fortune-telling abilities.

“It’s very hard for me to believe anything at all other than what’s happening,” Noroian says. “I don’t think there’s a higher power or anything like that. I think it’s psychological. Your brain is looking at the card and seeing what it wants to see.”

However, Noroian hasn’t always had this objective view of the world and of her tarot practice.

“I did call myself a witch last year but I don’t know if I would now,” she says. “I’m kind of hesitant to say the word [witch] because people are like, ‘oh that’s not real.’ And I don’t think that magic is real. I believe in the psychology behind it. …  I don’t have to be some spiritual, mystical person.”

Kim, in contrast, is somewhat conflicted about his belief in the spiritual aspect of tarot. On one hand, he doesn’t think that an association between divination and guidance from a higher power exists.

“I don’t think destiny or fate is a real thing because I think there’s so much agency in what we do,” Kim says. “I like tarot because … it’s random and so many things in life are random … It’s just a bunch of random things coming together and creating meaning out of, in essence, nothingness, but then it makes sense to you.”

At the same time, Kim is not opposed to belief in the supernatural.

“I like magic — I like the idea of it,” he says. “I am a very big believer in spirits and a lot of the supernatural beings … but I don’t know how much I believe in fortune-tellers or psychics.”

Ultimately, Noroian and Kim hope their peers will see tarot not as a strange psychic fad, but rather a way to become more in tune with one’s own thoughts and emotions, akin to other mindfulness practices like meditation or journaling.

“Tarot is a tool,” Kim says. “It has some mysticism in it but it’s not some end-all-be-all, ‘this is the right way.’ Nothing can know what’s going to happen. It’s just something to help you through what is happening.”