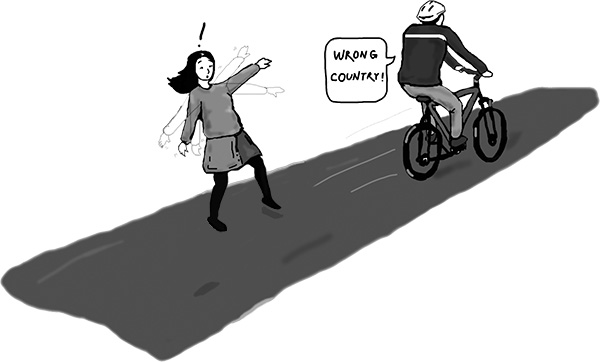 Taking the dirt path, I leave Palo Alto High School and meander my way toward the bridge to Town and Country Village. As I reach the start of the path, I notice a man on a bicycle pedaling toward me. I panic for a split second about which side of the pavement I’m supposed to walk on, and then decide to play it safe and stay to the side until he passes to avoid being flattened by his bike. But instead, it’s his words that hit me.

“Wrong country,” the man says to me as he rides past. I stand there for a second in disbelief while he zooms away. I turn to look at another student, who stands frozen in shock as the sole witness, as my mouth almost forms the words: “Did he really just say that?”

But honestly, that almost-formed question is a rhetorical one, even in the sunny streets of liberal Palo Alto. Whether it was or was not an intentional insult of my Asian heritage, the man’s comment on the quiet outskirts of Paly has further led me to the realization that, although it’s not at the forefront of our minds, discrimination against Asians is not uncommon. I do not mean to discount the immense amount of racism faced by other minorities, but while we seem to be more aware of discriminatory actions against, say, African-Americans and Latinos, American society rarely acknowledges or even realizes that racism against Asians still exists. The sad truth is that we do not have the same type of knee-jerk reaction for condemning insults and stereotypes against Asians as we do for those against other races.

Take the common stereotype of Asians excelling at math. It is not uncommon to hear in the classroom, “He’s Asian — he’s probably good at math.” This comment is almost never met with any sign of visible or audible protest from either the person targeted or the surrounding classmates. Although excelling at math can be perceived as a “positive stereotype,” it is a stereotype nonetheless. For those who do happen to be good at math, the attribution of their success and hard work to their race discredits their own unique character. On the flip side, I personally would rather crawl into a hole instead of trying to complete a mysterious math problem that I’m expected to ace. Furthermore, the damage of this academic stereotype continues beyond high school; a study by Princeton sociologist Thomas J. Espenshade showed that, on average, Asian-Americans need approximately 140 points more on the SAT to stand on the same level as their Caucasian peers in the race to gain admission to elite colleges.

Though seldom mentioned, Asian discrimination in our society is not a new phenomenon. The Chinese Exclusion Act of 1882 clearly conveyed to the Chinese community the message, “We don’t want you in this country because of who you are,” while the Japanese-American Internment during World War II completely isolated and alienated the Japanese community. Yet, we barely learn about the prejudice against Asians from our history books or talk about it in general society; it is almost as if the racism doesn’t exist.

Anthony Lising Antonio, professor of education and program director of Asian-American studies at Stanford, says that the discrimination faced by Asian-Americans can be overlooked due to the “model minority” stereotype.

“Predominantly what we have seen in popular culture is the success story … and that’s an image and that’s a conception of all Asian-Americans, despite how they came to this country or what social conditions they’re living in,” Antonio says. “When we don’t see [the] struggles, I think it’s easy to assume that there is not discrimination or racism occurring.”

But discrimination and racism are occurring, even in Palo Alto. A group of boys have told me, “Welcome to this country.” I have heard the dreaded “ching chong” of fellow students, despite the fact that I can count the number of words I know in Chinese on one hand. Sitting in the audience, I’ve witnessed Paly theater perform a scene where a character sings, “What is it about the Asians, that fascinates Caucasians,” citing their “wontons” and “eggrolls.” And I can’t even remember how many times I’ve heard people say that they can’t tell me apart from my Asian friends and that we all look the same; each time, I feel stripped of my individuality and self-esteem.

A life of these damaging comments and stereotypes, a life in which others don’t seem to notice either the comments or the consequences, leads me to feel unwanted and judged simply by my race, not by my individual self. No one of any race should feel this way, and so I urge our community to recognize all forms of racism and discrimination. Only then can we have a future where there is no unsafe side of the road, where citizens of all races can live confidently and safely in this country.