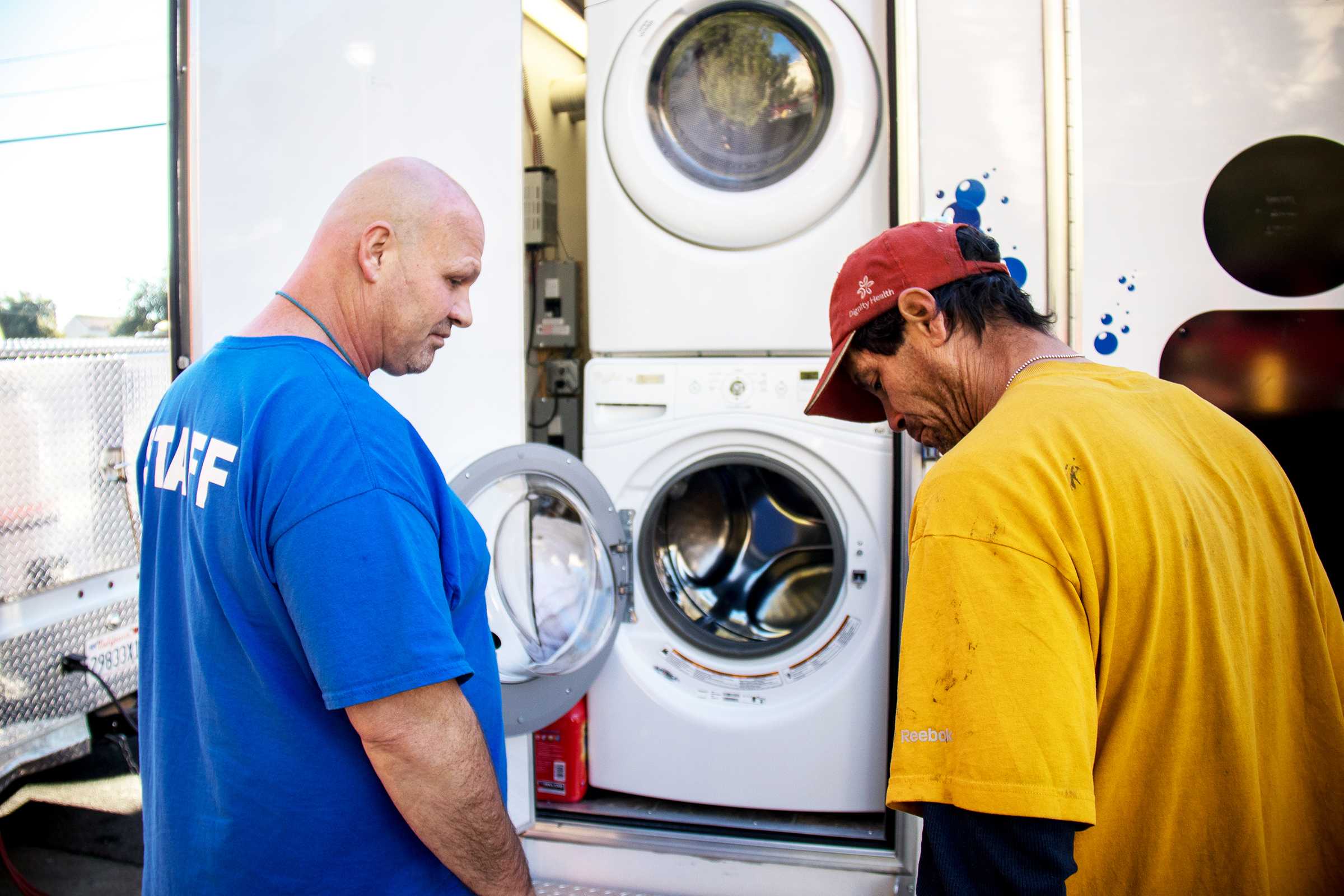 It’s early Saturday morning, and the streets are still wet from last night’s rain, but a white trailer parked on a street behind Town and Country is already bustling with activity. A woman in an oversized red sweater, hauling her belongings in a plastic bag, opens a door in the side of the trailer and pulls a load of clean laundry from the dryer hidden inside.

The inside of the trailer reveals a spacious bathroom, complete with a toilet, sink and shower, while another set of doors leads to two washer-and-dryer sets, one on each side. This one of two trailers operated by Dignity on Wheels, a non-profit organization founded in 2009 by East Palo Alto Pastor Paul Bains and his wife Cheryl Bains. Dignity on Wheels provides homeless people around the Bay Area with shower and laundry services free of charge. With housing prices soaring in the area, the organization’s services have become more urgently needed in recent years.

“Right now the homeless population is growing in Santa Clara and San Mateo Counties because the market rent is so high,” says Paul Tunison, head of the Palo Alto trailer. “When you’re 55 or 65 and you’re only on a fixed income or you lack income, you’re being displaced by the high rents.” 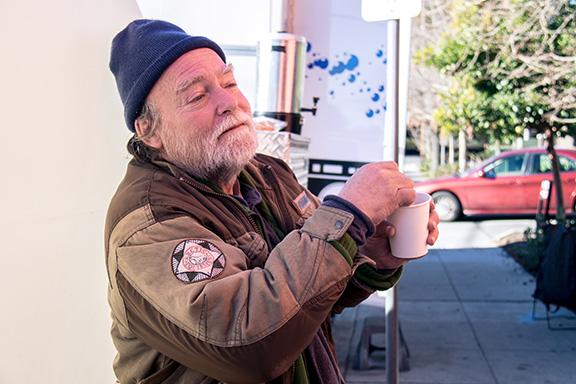 Tunison says that the organization does much more than provide “basic human rights,” such as food and clothing. Tunison and other trailer managers use Dignity on Wheels as a tool to establish connections and engage with homeless people. From there, Tunison invites them into his office, where he creates personalized plans for their re-entry into society.

“I think the problem that people don’t realize is that when an individual is out there in the streets for a long period of time, they don’t realize the difficulty it takes to get the individual back into self-sufficiency,” Tunison says. “Our mission is to basically get them back as fast as possible.”

Tunison’s own history with homelessness and the foster care system has aided him immensely in understanding how to best help his clients, who come to him hoping to wash their clothes and take a shower, but also to seek job advice and housing.

“My career background is 25 years of homelessness, 25 years of substance abuse and 9 years of incarcerations,” Tunison says. “That’s what makes me effective — my own experiences, along with some educational background.”

After being homeless in San Francisco for the latter portion of this adult life, Tunison entered his ninth treatment program in 2009, and his life began to improve significantly. Religion played a large role in his re-entering of society; Tunison cited his faith as the main catalyst for his return to education. After receiving a college degree, he got a steady job working at Mcdonald’s.

“Things didn’t start to change for me until I hit the age of 40,” Tunison says. “I can tell you that God had worked in the lives of other people to help me. The beginning wasn’t easy but [change] was achievable.” 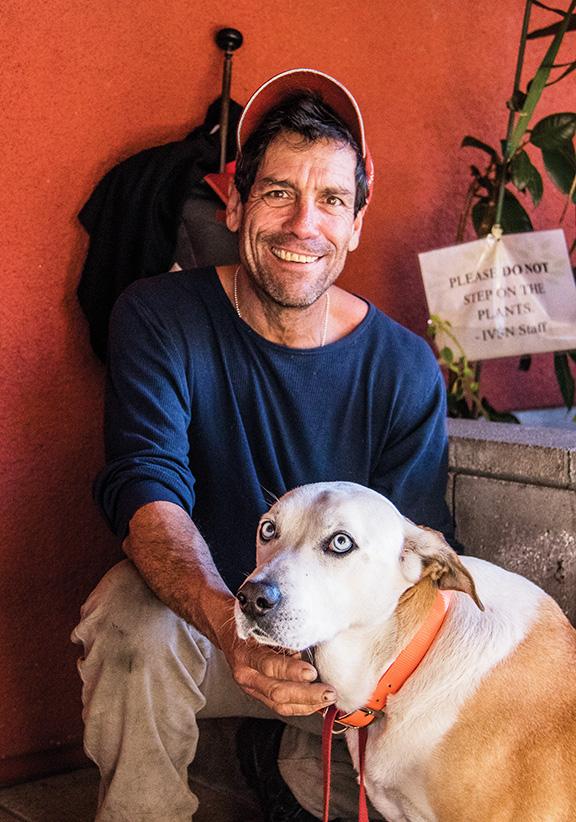 Jim, a Dignity on Wheels beneficiary, kneels beside his dog Smokey, who received surgery for an injury because with DoW’s help. Photo by Emma Cockerell.

A man and his dog

For Jim, who has been homeless on and off for many years and whose name has been changed for privacy reasons, Dignity on Wheels is a source of support that he can consistently rely on, as is the Opportunity Center, which Dignity on Wheels works closely with. Both organizations have helped to provide him with laundry services, food, clothing, and most recently, housing, which Jim will likely be receiving this month.

In addition to supplying him with basic needs, Jim says that Dignity on Wheels has consistently gone beyond the call of duty. In fact, his first introduction to the organization came when the staff went out of its way to help his dog, Smokey.

“When my dog got hit by a car, there was somebody who sent an email and my dog ended up getting this high-end hip surgery on him,” Jim says. “I couldn’t afford it, I didn’t have money for something like that … but they made it possible.”

The staff has also been instrumental in helping Jim find employment. His “computer illiteracy” and twelve-year residency in the Foothills has made the job search more difficult, and Jim has benefitted from receiving technical help from staff.

The people behind the magic

“I’d say that homelessness has become an epidemic [in the Bay Area],” Blount says. But what worries her most is that, in addition to traumatized veterans and displaced senior citizens, the typical faces of homelessness in America, her organization has now sees entire families in need of aid.

“We’re seeing families that are living in their vehicles, or in motor homes, or doubling and tripling up in houses,” Blount says, mostly because they can no longer afford to pay rent in the Silicon Valley and in neighboring areas.

Santa Clara County, where Dignity on Wheels makes many of its stops, has long been a hotbed of homelessness. The county holds the nation’s ninth-highest homeless population, according to a 2015 report by the Department of Housing and Urban Development.

With roughly 6,556 homeless individuals in Santa Clara County alone, Dignity on Wheels staffers have their work cut out for them, but Blount is optimistic about the number of people that her organization can reach. She warns that the true number of people who use the trailers is difficult to record, but estimates around one hundred individuals per trailer.

That’s a lot for an organization formed less than ten years ago, but Blount says that Dignity on Wheels has ambitions to expand. The organization hopes to acquire “a couple more trailers” by the end of the year, and is in the process of increasing its case management services, according to Blount.

Case managers “will go out and help to connect clients to other services, medical appointments, things like that,” Blount says. These services are vital for homeless people, who often suffer from the type of chronic health problems that fly under the public’s radar. Foot care, for example, is a “very serious issue” among the homeless, Blount says.

Dignity on Wheels’ commitment to well-rounded, long-term healthcare makes it unique among the dozens of local organizations. Its staffers don’t simply pull up a trailer six days a week to let its clients shower and do laundry; rather, they see the trailer as an opportunity to forge deeper connections and formulate long-term solutions housing and job solutions

“Last year we [at the Opportunity Center] were able to house 33 people, and out of those 33, six came off of this truck,” he says. But beyond the more tangible results of Dignity on Wheels’ work, Blount sees a transformation in her clients that cannot be measured in numbers and statistics.

“[W]ith us providing showers and laundry, we’ve seen individuals just be able to re-engage with society, get back into their lives, get back into living.”