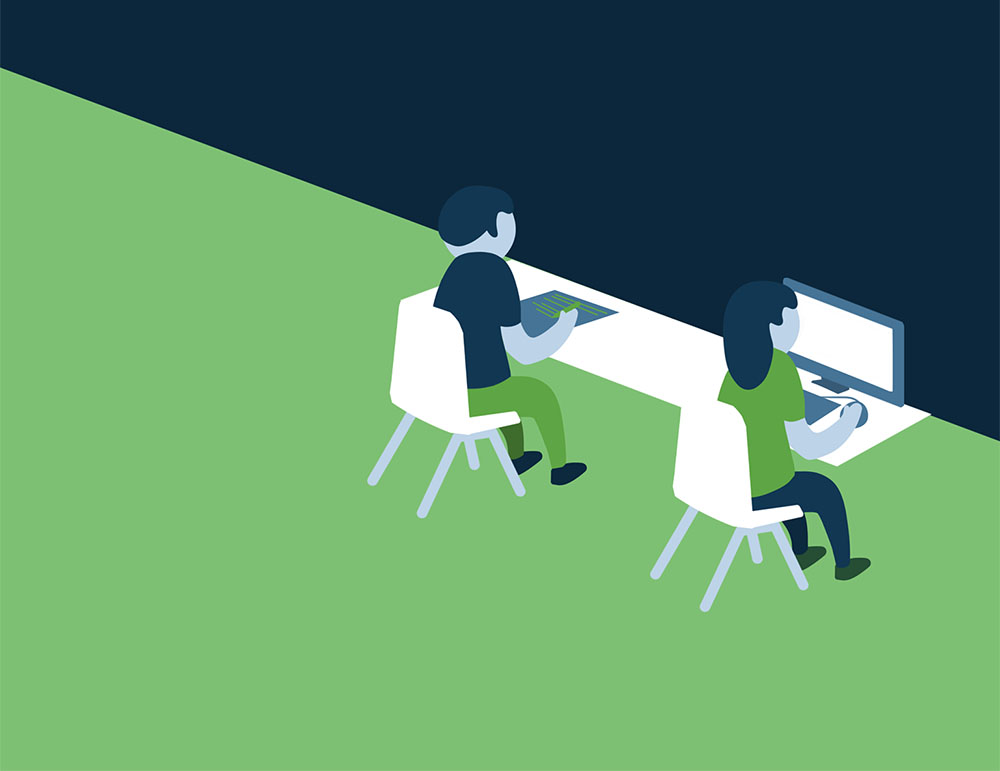 Amid the chatter of his peers, Rayshaun Jordan, a senior at Eastside High School, rolls up the sleeves of his red and white Eastside hoodie and gestures purposefully, speaking about the differences between his education in public school and his current experience in a charter school.

“If you were focused, you suffered,” Jordan says, describing his experiences at Costaño Elementary School in East Palo Alto, where he says class disruptions were the norm.  After leaving the public school system and entering Eastside, which he describes as “a diamond in the rough,” Jordan has found a place where he can thrive. 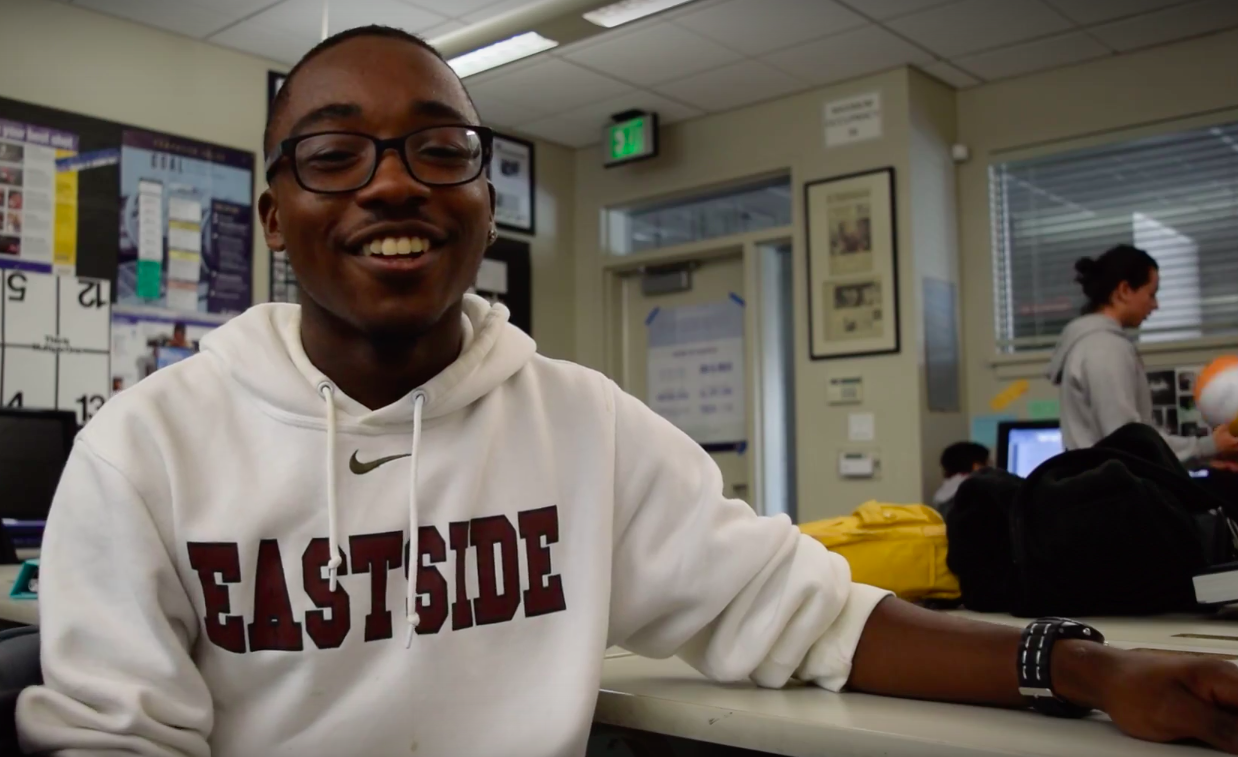 After leaving the underfunded public school system in East Palo Alto, senior Rayshaun Jordan has found a place where he can focus on his education. Photo by Alicia Mies.

Betsy DeVos, President Donald Trump’s newly confirmed Federal Secretary of Education, seems to think so. DeVos is one of the nation’s most enthusiastic proponents of school choice, a system in which parents send their children to the school they decide best fits their student. She also suggests relocating funds to charter and private schools, which would strip public schools of much of their federal funding and advocates for “vouchers,” which redirect taxpayer funds to allow parents to send their children to the private schools of their choice.

Since a community mere miles away from Palo Alto already uses a system similar to the one DeVos has championed in Michigan for years, now is the time to discuss the changes that will occur on a national level.

Regardless of one’s stance on DeVos’ advocacies, it is apparent that her confirmation will drastically change the way we approach education reform. The most pertinent question following her appointment will be a matter of what types of change she will bring — will she throw East Palo Alto’s struggling public schools a lifeline by reforming existing systems, or will she do so with school choice as she has in her home state of Michigan?

Criss-cross, applesauce, we ended up with DeVos 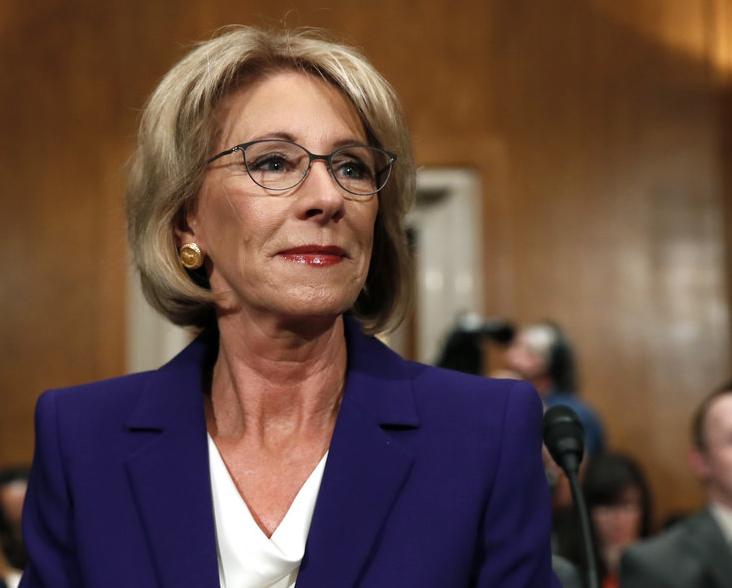 Betsy DeVos, a Republican millionaire, was recently confirmed by the Senate by a margin of 51-50. Photo courtesy of NPR.

Before becoming the Secretary of Education, DeVos spent two decades in her home state of Michigan championing charter schools.  The rise of charter schools, or publicly funded schools that are independently run, has had direct impacts in Michigan. Brian Wilson, a Palo Alto High School journalism teacher with 18 years of experience teaching in Michigan public schools, saw the hardships that students had to endure first-hand as a result of DeVos’ actions as lobbyist.

“There were schools that were open one day, and then there would be a sign posted on the door the next day saying the school had closed,” Wilson says. “A lot of that lack of oversight and lack of regulation led to some difficult situations for students.”

One of the major problems with charter schools, according to Wilson, is that they are run more similarly to for-profit private schools or corporations instead of public schools, which are run entirely by the government and do not produce profit.

“There’s a huge concern when you start to treat entities like public schools as a business,” Wilson says. “There are certain things where there’s such a human element to them — we’re not factories putting out a product.”

Although Wilson says that the bulk of charter schools performed similarly to the public schools in Michigan, he also says that charter schools are not necessarily the solution to the problems that country’s  education faces. 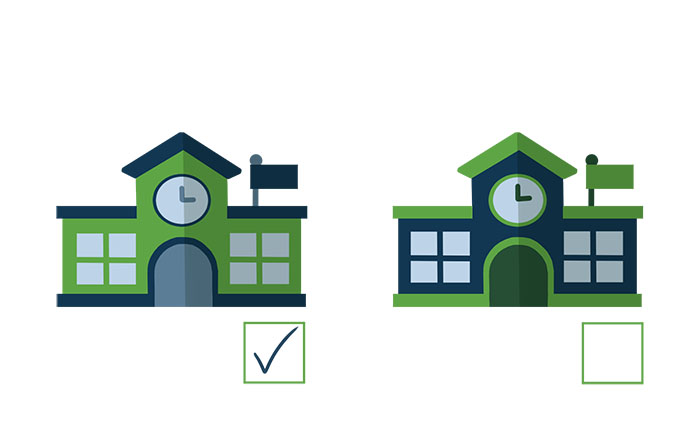 DeVos’ support for the system known as school choice, which redirects funding from public schools into charter and private education, has sparked controversy throughout the nation. Art by Vivian Nguyen.

“The families that live in those districts are incredibly poor,” Wilson says. “To think that there’s not a correlation between the two [poverty and low-quality education], to think that you can just make things magically better by opening a charter school — is more than a little silly.”

Palo Alto Unified School District school board member Ken Dauber confirms Wilson’s claims, saying that DeVos’ passion for charter schools and lack of experience in office makes her ill-suited for her new position. “DeVos is a terrible choice for       Secretary of Education,” Dauber says. “She seems remarkably ignorant about the actual issues of public education.”

Case study: A student-dubbed diamond in the rough

After East Palo Alto’s only high school closed in 1976, students were redirected to public schools in neighboring cities.  This caused 65 percent of students to drop out of high school, with less than 10 percent enrolled in four-year colleges, according to the Eastside website. Since the opening of Eastside in 1996, 100 percent of graduates have been admitted into four-year colleges, speaking to the quality of education offered by the school.

Students who do not attend Eastside have other options for high school, with most being redirected to the Sequoia Union High School District and attending Carlmont, Menlo-Atherton, Sequoia or Woodside High School based on their address within district boundaries, according to the RCSD website. They can also opt for private or charter schools or transfer out of the district through the Tinsley program. 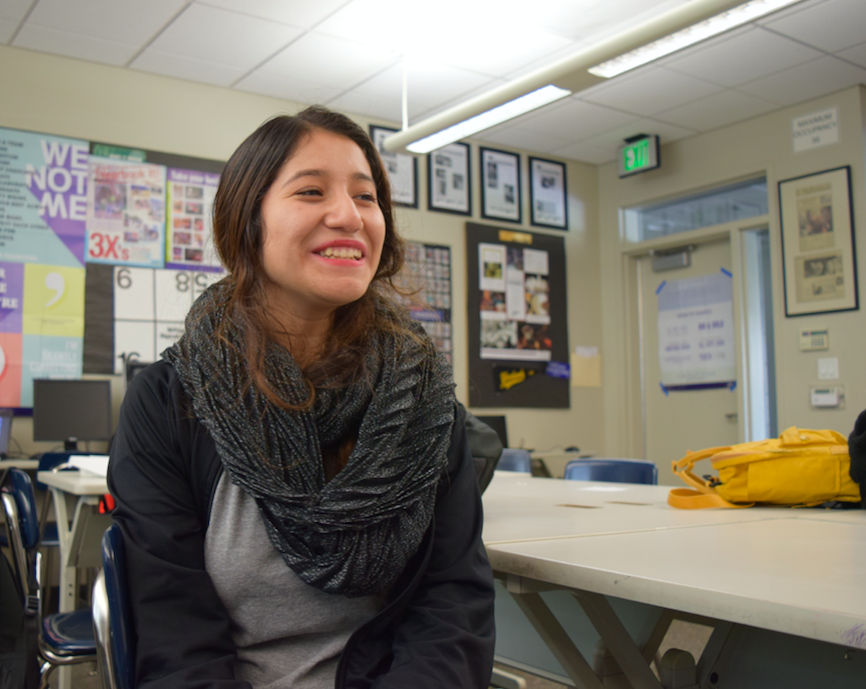 Wendy Avilar, a student at Eastside, feels lucky to have attended a rigorous school that put her on the path to college. Photo by Alicia Mies.

“Over there [in public school], I didn’t get as much help as I would’ve liked,” says Wendy Avilar, an Eastside senior. “Here I have teachers who support me, help me out and guide me through the process.”

Although Avilar speaks confidently and attributes her success to the increased attention she receives at Eastside, students at neighboring high schools tend to be less sure of their academic abilities.

Carolyn Blatman, the executive director of All Students Matter, an organization which provides over two hundred volunteer tutors in public elementary schools in East Palo Alto, echoes this statement. “These kids [in public schools] have very low self-esteem and don’t really think that they are going to be able to achieve anything,” Blatman says. “Some of the statistics aside from academics are pretty shocking. A third of the kids we work with are considered homeless. 94 percent are low income.”

In addition to economic factors, social norms play an important role in the drastic differences between local public schools such as Menlo-Atherton, where Avilar would have attended, and Eastside.

“Something I notice about public schools is that the kids there always get sent to the office and don’t care about their homework,” Avilar says, reflecting on her earlier experience at Brentwood, an elementary school in the Ravenswood district. “If I went to a public [high] school, I wouldn’t have cared as much about my education. I’m happy that I’m not over there. Here, we have a mission to go to college — we want to get somewhere.”

Eastside senior Jocelyn Banuelos chimes in, and expresses her gratitude for the camaraderie she found at Eastside that she says contributed to her experiences. 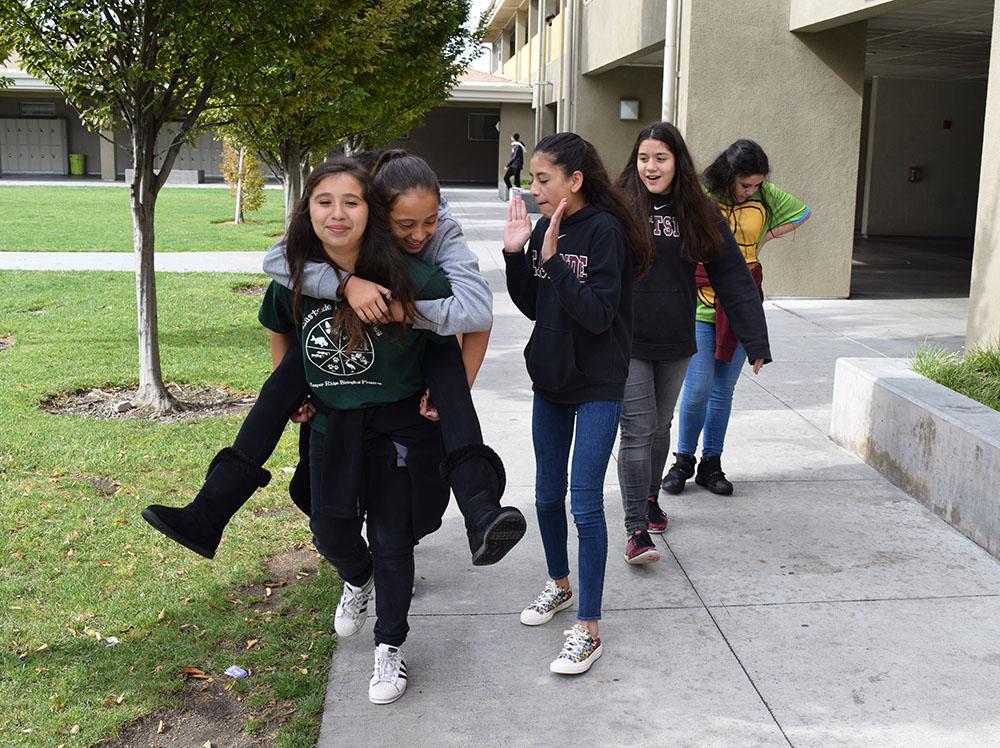 PIGGY BACK RIDE Middle schoolers at Eastside relax during their lunch break on a crisp day. “My favorite thing about Eastside is that it makes us feel like a family,” one student says. The first generation students, many of whom live on campus, enjoy the benefits of a modern private school education. Photo by Alicia Mies.

Other Charters in the Bay

Although Eastside students thrive both socially and academically, charter schools are not a one size fits all model that can be scaled up and adapted to the nation or region as a whole.

“What makes charter schools successful in underperforming communities is that they innovate and target their local community,” says Anthony Braxton, an eighth grade teacher at Cesar Chavez and Green Oaks Academy, a public school, in East Palo Alto. “There may be things that they need to focus on that other schools do not.”

Braxton’s views on charter schools are influenced by his experience teaching at public schools similar to those in East Palo Alto in San Lorenzo and San Francisco, as well as private schools.

As a former teacher and current Palo Alto Unified School District board member, Jennifer DiBrienza feels that DeVos’ model of school choice avoids the problem instead of solving it.

“I think it’s important to remember that we have a commitment to educate everyone, and if we have a situation where that’s not happening, we have an obligation to fix that, not take a percentage of those kids elsewhere and leave the rest,” DiBrienza says.

Although Palo Alto public schools receive the bulk of their funding from property taxes instead of the federal or state government, other districts remain vulnerable to financial deficits.

“I think [DeVos’ confirmation] will have a larger impact on schools that have higher needs,” Dauber says. “The government should give more money to schools with more lower incomes or students with special needs [like] East Palo Alto schools.”

Braxton’s perspective differs slightly from those of DiBrienza and Dauber, although he does agree that DeVos’ championing of charter schools, if successful, could damage the health of the current education system. Simultaneously, he believes that DeVos will not be able to create reforms that will last following the duration of her term as Secretary of  Education.

“She has a sense of what she can influence that is probably not realistic,” Braxton says. “I don’t think the changes she would want to be embraced on a national level would actually be effective.”

Although the odds that DeVos’ lobbying suggestions will be translated into real policies are slim, Braxton believes that underfunded school districts could benefit because DeVos’ advocacies shed light on the underlying issues at hand and could pave the road to progress. “[DeVos’ confirmation] is not a real positive sign,” Braxton says. “It’s a mixed bag, but if it were possible for her [DeVos] to put a spotlight on students who go to schools in underperforming districts, then that’s a positive change,” Braxton says.

While schools such as Eastside have brought students closer to their dreams of attending college, these educational institutions remain imperfect, especially in terms of the drastic achievement gap between students in wealthy districts and their underprivileged counterparts.

As DeVos embarks on her journey as the Secretary of Education, only time will tell whether her four-year tenure will bring progress, as Braxton hopes, or whether she will spread the Michigan model of struggling charter schools that often leave students disappointed across the nation.   v