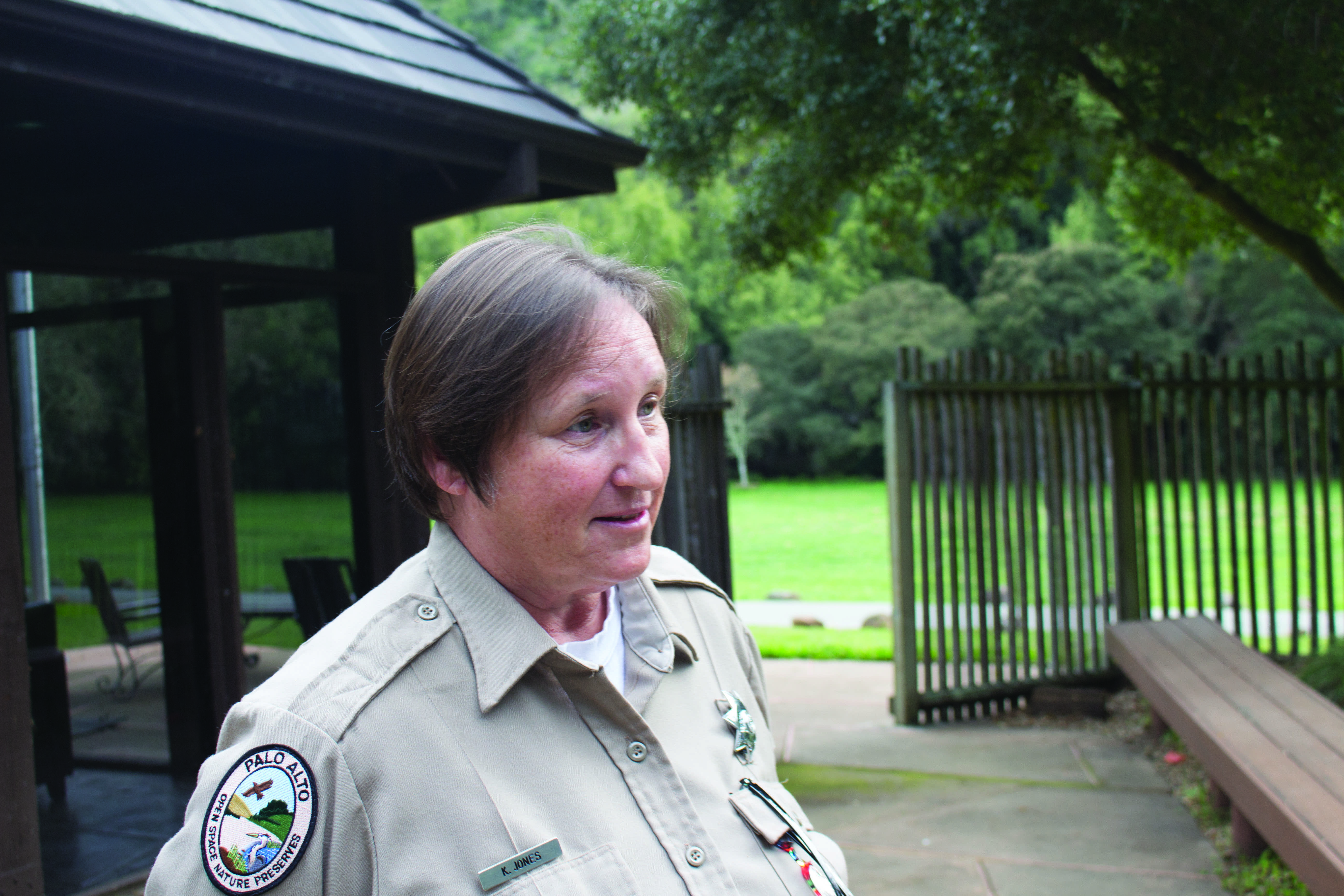 The mini garden adjacent to the Foothills Park Interpretive Center is almost untouched by the outside world — the chirp of birds and the occasional passing airplane disrupt the still atmosphere. The air is fresh and sharp, harbingering an oncoming rain. It’s a different world from the cubicle that Kathleen Jones, a park ranger at Foothills, worked in 10 years ago.

Palo Alto park rangers like Jones are given the opportunity to go about a noble occupation: to foster public love for nature and maintain the parks, keeping them as stress-free sanctuaries for weekend getaways. With nearly one third of Palo Alto’s land designated for open space, their job is crucial in protecting Mother Nature.

Jones looks like your typical park ranger in her olive jacket and structured tan button-up shirt. She stands tall with her feet apart, her eyes giving off a friendly sparkle as she speaks. She looks so at home in the outdoors, surrounded by tall trees and grass that it is hard to believe that she hasn’t always relished being in the outdoors.

Jones was born and raised in the Bay Area. As a youth, she never harbored a liking for being outside. It wasn’t until college that she really began to appreciate nature.

“When I was in high school and even in college, it [nature] was not always a priority for me,” Jones says. “But I still would somehow find myself outdoors, and it wasn’t until I was a young adult, in my 20s that I just found myself doing more and more outdoorsy things.”

After receiving her bachelor’s degree in philosophy, she pursued a tech job that confined her to a small cubicle. Eight years into it, she found herself frequently volunteering to do trail work and habitat removal at local parks — nature was becoming an escape from her work environment.

Eventually, Jones went back to study park management and graduated in 2006. She has worked as a ranger ever since.

“I had to get outside,” Jones says. “I couldn’t be indoors any more.”

Today, Jones admits that she still spends a fair amount of time indoors, attending meetings and acting as the social media manager for the city’s open space perserves. After all, she has the most experience with technology of all the rangers at Foothills Park. Still, she’s found a great deal of freedom compared to her previous stuffy desk job.

“There is a lot of autonomy, which really appeals to me as a person,” Jones says.

The job of a park ranger is liberating, and it provides a great amount of freedom for her to decide how to spend the day. Jones’ position involves a great variety of duties, ranging from the less-than-glamorous task of keeping the restrooms in ship shape to guiding park goers on nature walks.

On the flip side, being a ranger requires a great amount of motivation, as with a rotating staff of around seven people the job often demands that a ranger takes the initiative. With the unofficial position as social media manager, Jones also has the task of increasing the parks’ digital presence.

“I think it [social media] is hugely important because it extends how we can bring the Foothills to people,” Jones says. 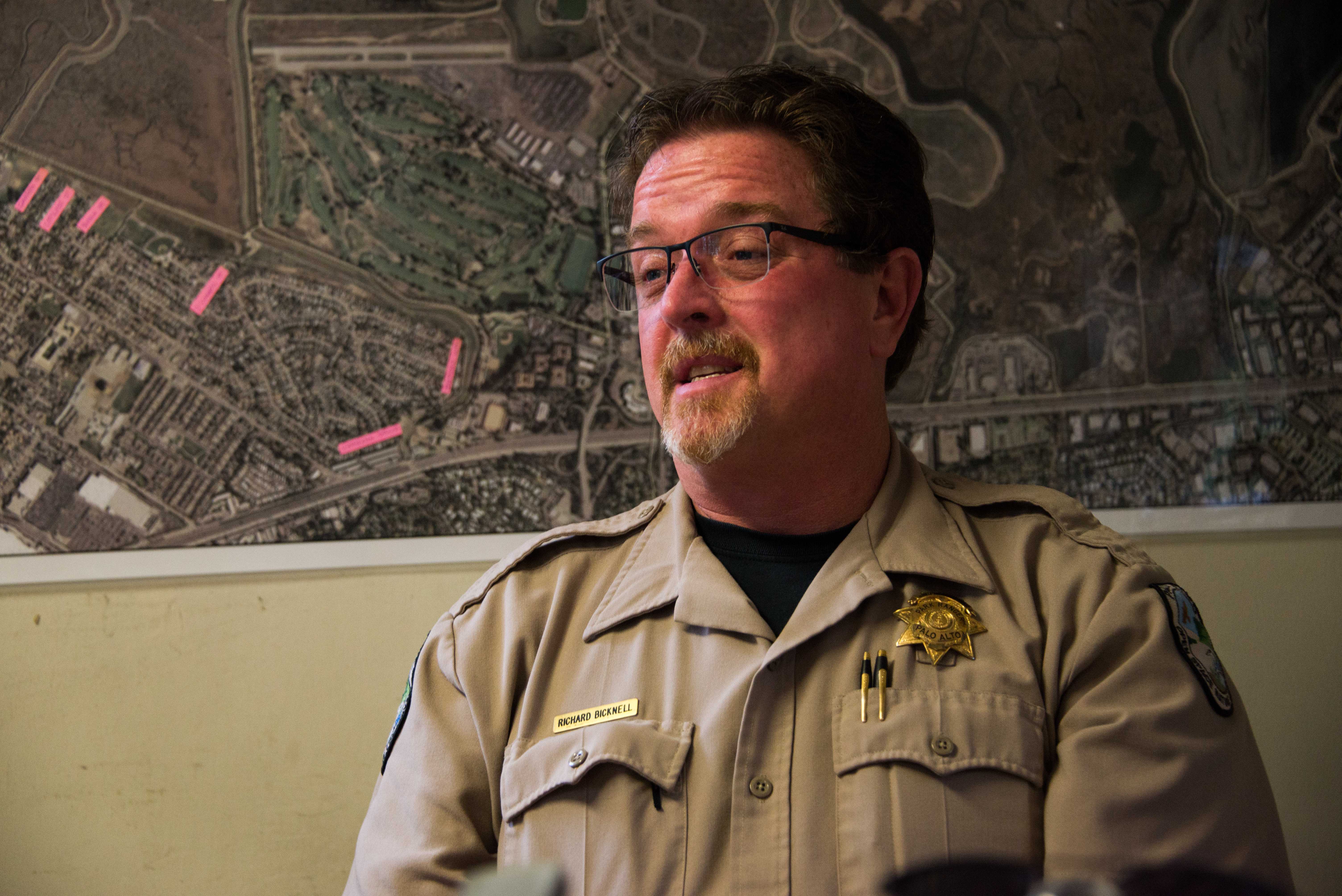 The unseasonally warm sunshine of an early March afternoon shines down on the Baylands Open Space Preserves ranger station. The first spring birds chirp outside while Richard Bicknell, a park ranger of 15 years, leans back in his office chair.

From a young age, Bicknell had a passion for the environment and nature. Twenty-five years ago, he worked as a landscaper, installing and mowing lawns, and planting flowers.

“I really liked it because it was outdoors in nature, but I didn’t feel like I was going to have a huge positive impact on the world,” Bicknell says.

But after graduating from Unity College with a degree in environmental science and a concentration in conservation law enforcement, Bicknell knew he wanted to become a park ranger.

In his current position of generalist park manager, Bicknell covers all of the necessary responsibilities concerning open space, which include law enforcement, firefighting, medical management and weeding.

“We [generalist park rangers] are generally interested in everything,” Bicknell says.

Of all his daily duties, large parts of his days are devoted to communicating with visitors, especially when he catches them breaking municipal laws. He always tries to spin his scoldings into more educational experiences.

“We approach people in a polite, friendly, and calm manner.” Bicknell says. “That way they know why they shouldn’t do that [illegal activity], as opposed to kicking them out of the park with a $500 ticket.”

Bicknell says he enjoys working as a ranger because the preserve will forever remain untouched, and because he’s able to do his job without a gun. He believes that a ranger should form connections with others rather than panic visitors.

“If you’re carrying a gun, every contact you have is an armed contact,” Bicknell says. “Guns make people nervous. I would much rather educate somebody and gain compliance that way than by handcuffing them.”

Bicknell’s jovial chuckle echoes around the room. It’s clear that he loves his job, which offers a perfect combination of public education, human interaction and environmental preservation.

“I think it’s the best job in the world,” Bicknell says. “For 99 percent of the time, it’s pleasant, it’s different every day and it’s fun. I meet people all over the country and all over the world who come specifically to see the Baylands — I get to work at a place where people want to come and play.”