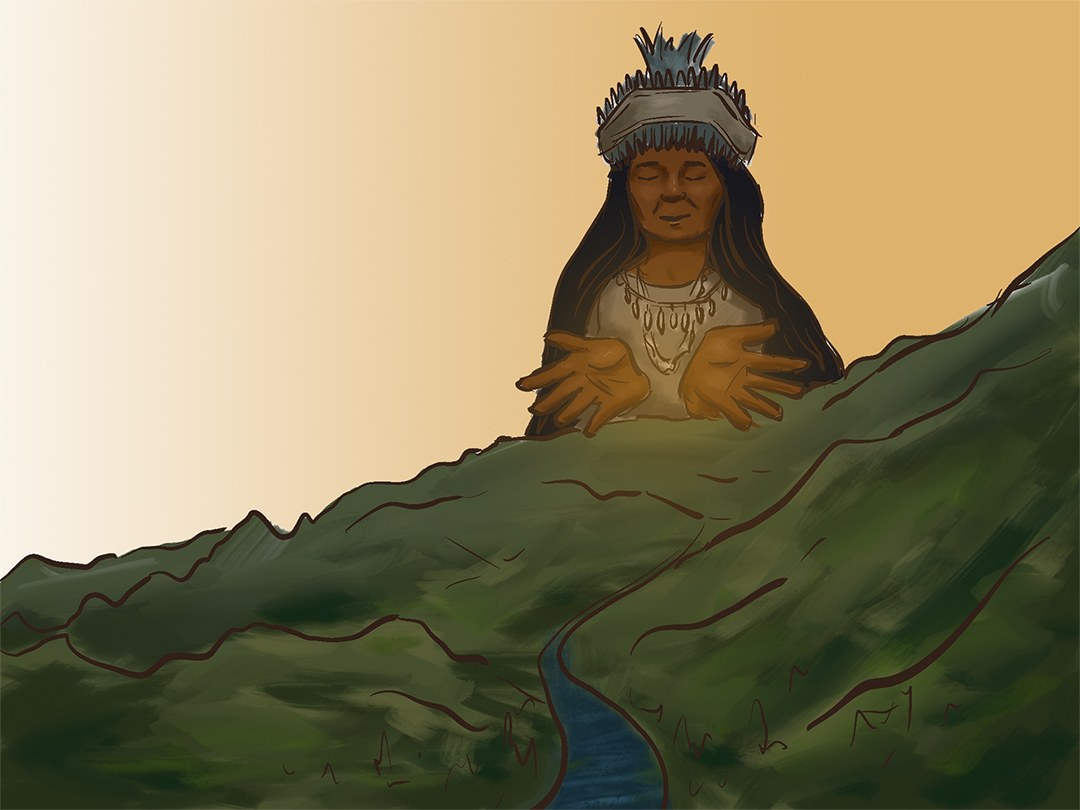 GIFT OF LIGHT — A figure is depicted releasing light over the landscape, symbolizing the Indigenous traditions of giving back to the land. The figure's dress is based on the traditional wear of the Muwekma Ohlone, an Indigenous tribe local to the San Francisco Bay Area. Art: David Tomz

We had certain ways that we did life under our sun,” Muwekma Ohlone tribe member Joseph Torres said. “And now we’re stuck in a four-cornered wall … celebrating colonizers’ visions of celebrations of mixed relations.”

Prior to the arrival of European settlers and the violence that followed. Indigenous tribes such as the Muwekma Ohlone — who are native to the San Francisco Bay Area — lived drastically different, unconfined lives where they were free to practice their traditions and live by their cultural values.

Though Thanksgiving often celebrates the tale of the union of pilgrims and Indigenous tribes, the truth of struggle and displacement is concealed behind this festive mirage. In light of the upcoming holiday, Verde reached out to local Indigenous voices for perspectives on the traditions of Thanksgiving. Here is what we learned.

The first Thanksgiving was a celebration of colonial success, a conquest that came at the cost of native lands. According to a New York Times article, in subsequent decades, descendants of the settlers that celebrated the first Thanksgiving stripped many natives of their property and rights, leaving them homeless on their ancestral lands. Though Thanksgiving is marketed as a time of peaceful communion between natives and colonists, their relationship was rarely peaceful, and many Indigenous people have called attention to this dichotomy.

“The holiday is based upon a false premise of a mutually beneficial relationship between Natives and settlers.”

Nevertheless, some Indigenous scholars today, such as Stanford University’s Center for the Comparative Studies in Race and Ethnicity Advisory Board Chair, Valerie Red-Horse Mohl, value the celebration of gratitude that comes with the holiday.

“I don’t like the history of what happened around the first Thanksgiving,” Red-Horse Mohl said. “I mean, there’s lots of negatives, you can look at the smallpox that was brought, and just all kinds of things. But I think at the end of the day, it is a good time to give thanks for whatever is a blessing in our lives.”

“I was not raised with a critical perspective of the holiday as we celebrate it in the spirit of gratitude for one another,” Paisley wrote in an email to Verde. “However, that does not divorce the fact the holiday is based upon a false premise of a mutually beneficial relationship between Natives and settlers which presents a narrative of peace between the two groups during the formation and evolution of this country.”

Paisley emphasized the importance of learning and teaching the holiday’s history beyond what is taught to young children at school.

“Latching onto false narratives of peaceful relations between Natives and Euro-American settlers at the foundation of this nation perpetuates an incorrect public assumption that marginalizes the experiences of contemporary Indigenous people,” Paisley wrote.

To move forward, Paisley finds that visibility is of one the greatest issues facing the Indigenous community.

“One of Native America’s greatest challenges is combatting the myth of invisibility,” Paisley wrote. “If the public perception thinks that all Natives were killed and no longer exist, that sets a dangerous precedent which undermines the contemporary experiences of our extremely culturally heterogeneous population.”

Paisley said he encourages people to educate themselves on the Indigenous perspective.

“Learn whose original land you are on,” Paisley wrote. “Make some effort to understand the contemporary struggles of Native people and examine how one can be a better ally to tribal peoples.”

As a part of her effort to represent contemporary Indigenous people, Red-Horse Mohl encourages others to take time during this holiday to learn more about the native experience by reading about Indigenous culture, watching native-focused movies and viewing traditional artwork.

“We’re still here, we’re still trying to bring back our ways, our cultural ways that were once really beaten out of us.”

Red-Horse Mohl said she also wants to see people, irrespective of their background, learning more about the native tribes of their area. For instance, Red-Horse Mohl mentioned that the Muwekma Ohlone tribe is native to Palo Alto.

“They [the Muwekma Ohlone] have a very vibrant tribe that works on sacred sites, preservation of sacred sites, and they’ve implemented a land tax and there’s so much to learn about the Ohlone,” Red-Horse Mohl said.

Chairwoman of the Muwekma Ohlone Tribal Council, Charlene Nijmeh attributes the Muwekma’s lack of federal recognition and security of Congress-mandated land for the tribe to a long history of political erasure.

“When the Spanish came, they built missions on our heads, on my people’s heads,” Nijmeh said. “When the American period came, they mined gold and then they developed cities, and then they built Silicon Valley on top of our heads And I think that, they did this because they wanted to displace the first inhabitants of the lands.”

Nijmeh emphasizes the importance of acknowledging the original stewards of the land.

“We’re still here, we’re still trying to bring back our ways, our cultural ways that were once really beaten out of us,” Nijmeh said.

Torres described the spiritual origins of the Muwekma Ohlone.

“All of our stories go really deep to the start,” Torres said. “We have star knowledge. All of us were great navigators. The Muwekma were people between land and water, so we had a different relationship compared to the Northern Plains people or all the way up to the red earth people, the Apaches.”

“When the American period came, they mined gold … and then they built Silicon Valley on top of our heads.”

The Muwekma Ohlone are now working to revive their long-dormant culture.

“We didn’t want to go dormant, we didn’t want to go to sleep,” Torres said. “We had to put our songs and dances away … and now we’re back. We are reviving our way back … these laws that have changed human rights are giving us an opportunity to dance and sing and wear our shell medicines, grow our hairs out. You know, live these ways.”

While acknowledging the importance of being educated on the history of Indigenous people in the United States, Red-Horse Mohl also places emphasis on moving forward in a positive direction, guided by the concept of gadugi — a Cherokee word meaning doing things that are good for the community, according to Red-Horse Mohl.

“I think we’re at a time where we need to work together and come together,” Red-Horse Mohl said. “And so I want everything to be with a spirit of gadugi so that non-Indian people know that it’s okay to learn about our culture, ask questions, and we’re welcoming those inquiries, and then it’s good for us to just go forward working together.”

In our efforts to further investigate the truth behind Thanksgiving and to learn more about the local Indigenous cultures, we compiled a list of resources for further exploration.