Debonair Debs: The brain behind the Bryant trees 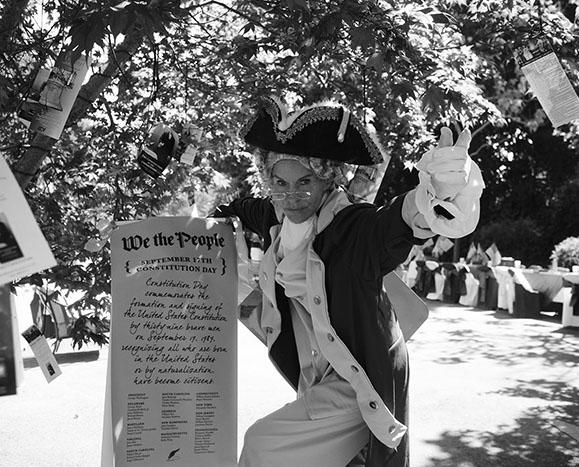 Decked out in a black, triangular felt hat, white gloves and an outdated jacket, Catherine Debs dons a George Washington costume in honor of Constitution Day. Her impersonation of the colonial hero succeeds in catching the attention of curious passersby, and Debs hands them copies of the Constitution, which are also hanging from the branches of two surrounding trees.

Students who commute to Palo Alto High School via Bryant Street may find the sight of festively decorated trees, nicknamed the Branches of Bryant, familiar.

Debs, currently a fellow at Stanford University’s Distinguished Careers Institute, is the artist behind the Branches of Bryant. Previously an employee at the mayor’s office in San Francisco, part of her job description was gift-giving to visiting officials such as the president of South Korea. She credits her gift-giving stint for honing her knack for theatrics and artistry.

For Debs, the tree decorations are her way of bringing the neighborhood together, and she aims to inspire others in the community to do the same.

“Lots of all kinds of different people from different parts of the world are coming to this area,” she says.

“It’s not about me. It’s about a secret way to get people to come together.”

– creator of the Branches of Bryant Catherine Debs

“This is a positive light in somebody’s day,” says Bernie Wooster, a lighting expert who assists Debs in maintaining the traditions of the Branches of Bryant every year.

Debs’ project began around 13 years ago, when she planted maple trees on the islands of the bike pass, which were previously filled with weeds and rocks. As the trees grew in size, she felt the need do something more to them.

Debs thanks a woman she encountered at Berkeley for inspiring her to start decorating — a woman who left miniature signs with humorous remarks next to dog droppings that sprinkled the streets.

All of the displays are products of Debs’ sudden sparks of inspiration. She has no set way of producing ideas; instead, she lets ideas develop themselves.

“A rose doesn’t unfold before its time; it’s kind of like that,” Debs says.

Debs first decorated the trees in 2011, when she decided to place green and purple lanterns in their branches for Halloween.

Fittingly, Debs’ next major decorating venture will be for Halloween, when she hires dancers and historians, rents photobooths and offers an assortment of food to trick-or-treaters.

“Sometimes there’s just fun stuff, like on Halloween, but sometimes there’s sort of an educational idea behind the space,” says Ryan Donahue, a Paly alumnus and Bryant street biking passerby. “I love it.”

“She [Debs] embodies the spirit of the best of Palo Alto,” says Margaret Chai Maloney, a close neighbor. “She is a local treasure and visionary who spends her time and her money making our neighborhood better. She reminds us of all the best values that our country stands for.”