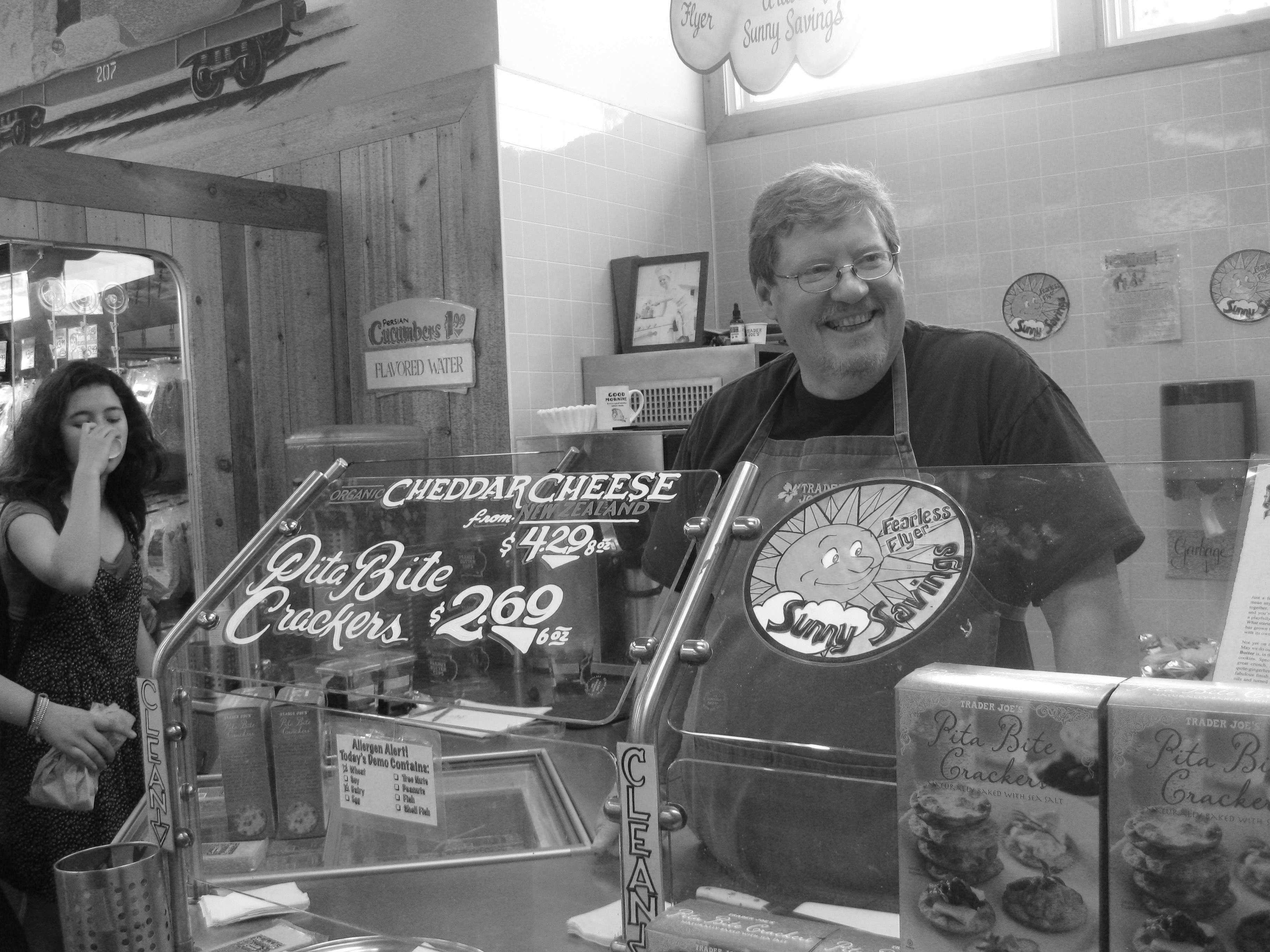 Dan the sample man: the story behind the Trader Joe’s apron

“This is good cheese,” says Dan the Sample Man, examining the enormous brick of organic cheddar resting on the counter of his sample station. A brunette, middle-aged woman walks up and takes one.

“That’s another perk of my job,” Dan says, smiling wickedly. “I get to ask people questions as they chew a mouth full of food.”

Countless Paly students frequent Trader Joe’s each day, but many are so focused on the prospect of food that they forget to pay attention to the man behind the counter.

Daniel Lacy is a familiar face behind the Trader Joe’s sample station. Although he is known for his work with samples, Lacy keeps a deeper story behind his smile and Trader Joe’s apron. Photo by Michelle Li

Meet Daniel Lacy, or just simply, Dan. Dressed in the traditional navy blue Trader Joe’s employee shirt under a fading purple apron, Lacy beams at every customer that passes by. Regular customers easily recognize his amiable smile and genial presence, but few are aware of the story behind his Trader Joe’s apron.

Having grown up in Fremont and currently living in Saratoga, Lacy has spent his entire life in the Bay Area. In high school, he dreamed of driving racecars, a dream which never materialized.

In the midst of Silicon Valley, he turned instead to the high-tech industry and sales. For roughly seven years, Lacy worked around the Bay Area for various high-tech companies. Even though Lacy enjoyed his work, the field of sales posed an issue.

“The thing about sales is that you work largely on commission, and you never know how much your paycheck will be,” he says. “I was getting burned out and I was looking for something where I knew how much my paycheck was going to be and [that] would be fun and entertaining.”

With this in mind, Lacy applied in 2009 for a job at the newly opening Trader Joe’s in Town and Country at the recommendation of his niece.

“I put down [on my application] that I would do everything in the store at Trader Joe’s,” Lacy says. “But I checked the box that said I would do sampling, and they said that nobody ever checks that box. People

are intimidated by it … So then they put me back here, and that’s what I’ve done pretty much ever since.”

For the past four and a half years, Lacy has helped develop the Palo Alto Trader Joe’s sampling station into a fully functional, round-the-clock service for all customers.

Even so, Lacy says one of the most important parts of his job is the interaction with other Trader Joe’s employees.

“Trader Joe’s is a fun place to work at,” he says. “They hire different kinds of people than you would see at most businesses. They generally care more about customer service than they do about how many boxes you can put away per hour, so they tend to hire people that are very fun and outgoing, people that are fun to work with.”

Lacy says he enjoys seeing Paly students, despite the liberal amounts of food that students suck up from the sample station. Specifically, he feels he has pitched in a bit of help along their road to college and future success.

“It’s funny because having been here for four years, I’ve seen them go through to graduation, and now I hear them all talking about the colleges that they’re going to go to,” he says. “I hope it’s the fact that I’m feeding them and putting them in a good mood so they’re prepared for school. I feel like I’ve had some little bit of their success.” 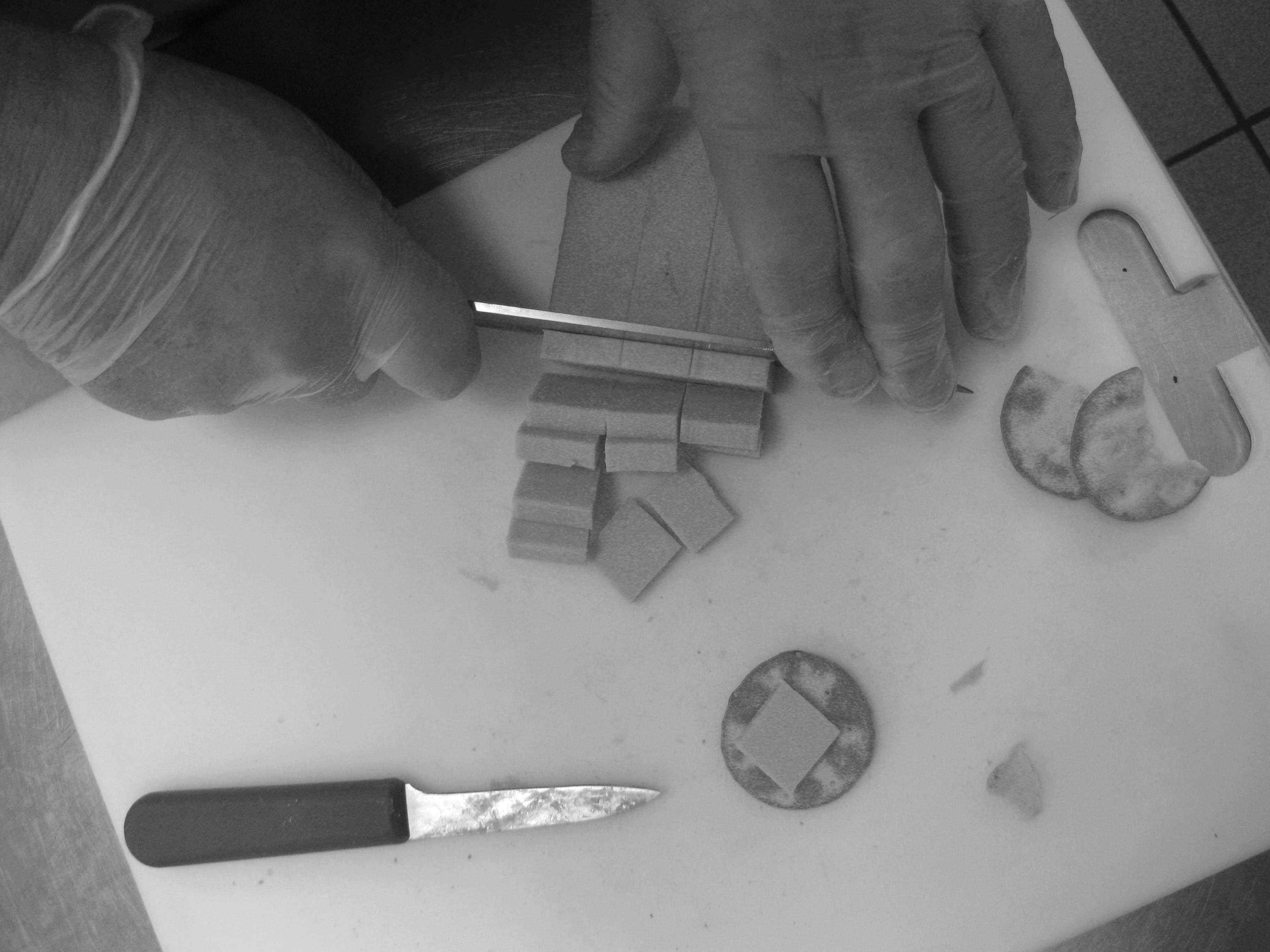 Lacy prepares cheese and pita chips to be handed out as samples. Lacy personally enjoys Trader Joe’s cheese, but tends to gravitate toward the more exotic snacks. “I like to sample … the stuff that looks kind of strange; the things that are a little bit weird,” he says. Photo by Michelle Li

At Trader Joe’s, Lacy also has the freedom to work with management in the store to decide on samples. His personal favorite is the cheese.

“Some people really like wine, but I have become a cheese snob,” he says. “I love sampling the cheese.”

Despite his love for the job, Lacy also harbors other hobbies, like sponsoring a punk band, “Psycho Sweethearts”, run by his nephew and niece, ages 15 and 16.

“Most of my time, and a lot of my money, is spent supporting them and their band,” he says. “They’re both very enthusiastic.”

In the future, Lacy hopes to move on from his job at Trader Joe’s. With a group of acquaintances from the high-tech industry, as well as some California rice farmers, Lacy hopes to form an alternative energy company.

“We’re trying to take rice straw and produce a substitute diesel,” he says. “A couple of PhD’s told me the idea was brilliant, and that’s impressive. But we’re a little ahead of our time, so we’ll see how it goes, but I’d like to do that. It’s going to be a little while because oil prices have to inch up before that becomes a practical alternative.”

For now though, Lacy remains at his station in Trader Joe’s, cooking and handing out samples five days a week.

He is quick to remind Paly students to take advantage of the food. When the store first opened, people asked him what he would do about the hungry Paly kids. Lacy’s response?