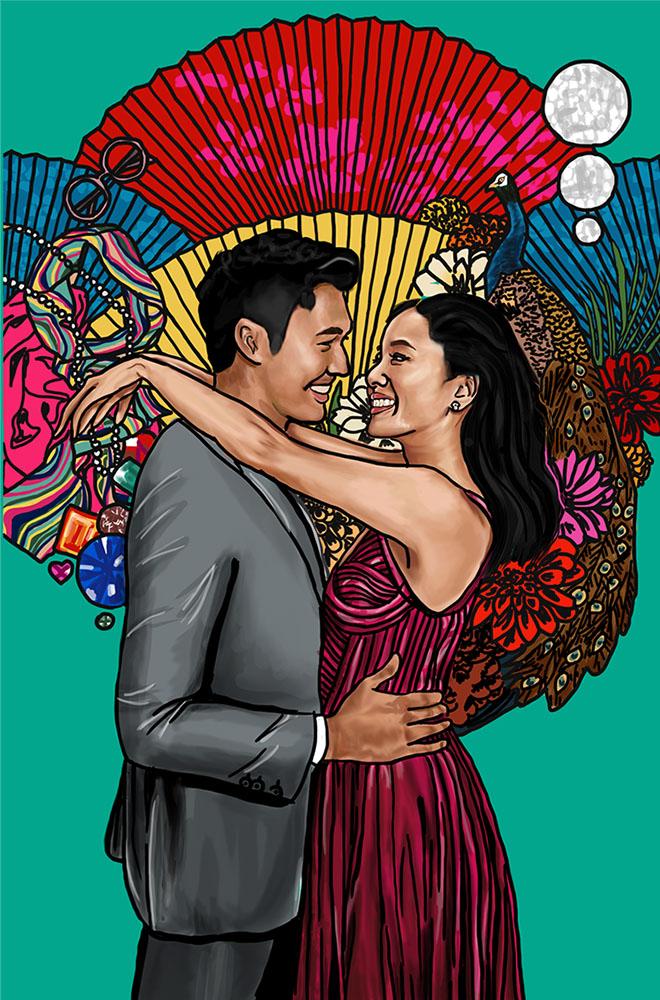 Weaving through the throng of guests dressed head-to-toe in vibrant and lavish evening wear, a cherry red Porsche pulls up to the brightly colored white and gold mansion of Tyersall Park, the most dazzling neighborhood in all of Singapore. As the main character, Rachel Chu, played by Constance Wu, steps out of the car, her stunning multi-colored dress sparkles in the moonlight as she is greeted by her boyfriend Nick Young, played by Henry Golding, whose cream-colored suit perfectly complements the grandeur of the mansion behind them.

Red lights illuminate the inside of the emerald green mansion as viewers get the first look into the extravagant life of the Young family. With breathtaking shots of vibrant Singaporean streets, food, fashion and culture, each scene of the movie transports viewers into the world of the crazy rich. From its diverse group of talented actors to its incredible cinematography, everything about this movie screams crazy, rich and most of all, Asian.

Directed by Palo Alto native Jon M. Chu, “Crazy Rich Asians” is a film about relationships, family and most importantly, tradition versus modernity. Released on Aug. 15 by the Warner Brothers studio, this film is the most successful romantic comedy, in terms of box office earnings, in nine years. It is also one of the few major American movies in history to feature an all-Asian cast, the last being “The Joy Luck Club” in 1993. The success of “Crazy Rich Asians” has not only earned a spot in history, but also paved the road for more Asian representation in a rapidly changing movie industry.

“Crazy Rich Asians” revolves around the lives of Rachel, an economics professor at New York University, and her boyfriend Nick, a fellow professor. It kicks into action when Nick invites Rachel to Singapore for a friend’s wedding. There, Rachel slowly discovers that Nick is not the person she thought he was: he’s not just rich — he’s a member of the richest family in Singapore. Rachel spends much of the movie butting heads with Singapore’s top one percent, most notably Eleanor, Nick’s disapproving mother, played by Michelle Yeoh. Rachel has her fair share of encounters with the unexpected, from a dead fish to Nick’s petty ex. However, she also finds strong female solidarity in Nick’s cousin, Astrid, and her best friend from college, Peik Lin, played by Nora Lum, who nails the comedic timing.

While “Crazy Rich Asians” is certainly a lighthearted watch, it imparts an important message on viewers about the value of love in all forms.

Despite Rachel’s rollercoaster of emotions, the first half of the film is filled with good laughs and brilliantly sets the scene for a showdown between Rachel and Eleanor. Both Wu and Yeoh play their respective characters with nuance and passion as they face insurmountable barriers in their relationship, every scene between the two radiating tense energy. This battle between Eleanor’s obsession with tradition and Rachel’s modern mindset is an ongoing theme throughout the film, but can most clearly be seen in the many confrontations between the two characters, which leave both Rachel and the audience in tears. Wu and Yeoh simply transform into their respective characters, bringing the audience with them on their journey and making us sympathize with Rachel’s frustration.

The amazing group of actors pairs perfectly with the production of the movie, which is full of stunning costumes and music that incorporate both Asian and Western influences. This combination further emphasizes the idea of cultures clashing and coming together in the end with one last powerful song, Coldplay’s “Yellow,” a bold act by Chu. “Yellow,” associated with a racist Asian slur, was chosen specifically for its name, Chu wanting to reappropriate it. Additionally, in every scene, from the casual coffee shop in New York City to the regal Youngs’ home, the costume design is impeccable, the attention to detail making it a truly immersive experience.

Despite all these highlights, the best part is the climax — Nick’s best friend’s wedding. While this trope of going to weddings is greatly overused in romantic comedies such as “Bridesmaids” or “The Wedding Singer,” “Crazy Rich Asians” finds a way to give it new life. As the bridal chorus serenades the crowd with “Can’t Help Falling in Love,”  butterflies swoop through the church and lotus flowers bloom on the ground as the bedazzled bride walks down the aisle.

Reflected in Rachel’s struggle are the issues many Asian-Americans face when growing up as they try to be both “American enough” and “Asian enough”.

But it is the emotion shown by both Rachel and Nick that truly makes the scene stand out. As they look at each other with a mixture of pain and love, the audience realizes their conviction to fight the struggles they face in their relationship and the extent of the uphill battle they will need to endure for the rest of the movie.

As the movie winds down, the themes of empowerment and the power of diversity  become apparent. Rachel realizes that her integrity is not worth sacrificing for a guy, and rediscovers her roots. Reflected in Rachel’s struggle are the issues many Asian-Americans face when growing up as they try to be both “American enough” and “Asian enough” to find acceptance in both societies. While “Crazy Rich Asians” is certainly a lighthearted watch, it imparts an important message on viewers about the value of love in all forms.

But while the film championed minority empowerment, “Crazy Rich Asians” lacked many other forms of representation, and certainly did not represent every demographic of Singapore correctly. It mostly focused on East Asians, and even in scenes demeaning other people of color, such as South and Southeast Asians, by placing them in inferior roles for comedic relief, “Crazy Rich Asians” isn’t perfect.

At its core, with a plot revolving around East Asian characters, “Crazy Rich Asians” certainly cannot please everybody. However, the success of this movie opens doors for more diverse casts to take their deserved spot in the hearts of audiences across the world. The movie offers a refreshing peek into the lives and culture of Chinese Singaporeans, and is a welcome break from the typical Eurocentric love story so often seen in theaters today. An important narrative to tell in the 21st century,  “Crazy Rich Asians” is sure to become an instant romantic comedy classic.