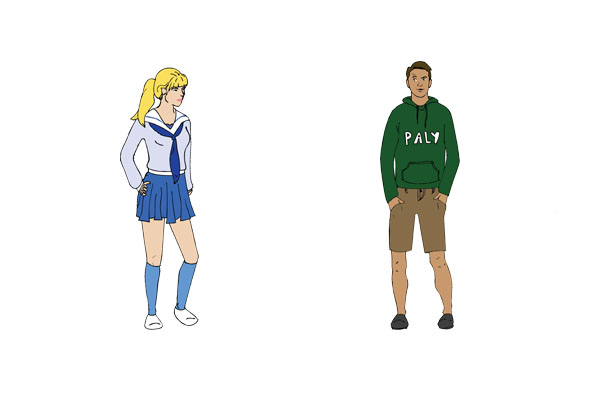 The differences of both students’ lives are decided by their different school choices.

As Palo Alto High School students finish off their week, they make their way to rest in the blue plastic chair on the quad.

Many gather with friends to discuss weekend plans and pedal off to each other’s houses to get ready for the football game later that Friday night. Just half a mile away at Castilleja School, groups of girls stroll over to Town and Country clad in white polo shirts  and blue pleated skirts. The students cross paths while cruising through the crowded underpass, their different lifestyles ultimately stemming from their school situation: public or private.

Lucy Fox, a sophomore at Paly, attended Castilleja for middle school before transferring to Paly a year ago. She says switching schools was the right choice, preferring the freedom of Paly life and the proactivity of the students.

“There are bigger classes at Paly, and not as much one-on-one time with the teachers,” Fox says. “And personally, I don’t mind figuring stuff out on my own. I like having more responsibility.”

On the other hand, Campbell Field, a junior at Castilleja, has been attending the school since sixth grade and still loves it.  She hardly considered leaving after middle school.

Although it was her mother’s idea for her to apply to Castilleja, Field says she genuinely enjoys the comfortable environment that Castilleja provides.

“[I love] how everyone is relaxed and friendly with each other,” Field says.  “It’s a very supportive community … we don’t have a whole lot of drama.”

Unlike Fox, Field prefers the smaller, more intimate environment that Castilleja has to offer.

“I think that it’s much easier to focus; I like the small classes,” she says. “If you have any questions, you can come talk to [the teachers] and they make sure that everyone knows what they are doing.”

Caitie Field, Campbell Field’s mother, says that she knew Castilleja would be right for Campbell when her daughter was in kindergarten.

“In first grade, she started going to the camp and she really loved it,” Caitie says.  “She enjoyed the independence [and] she loved the all-girl environment.”

Caitie explains that she has nothing against the public schools; she simply felt that Castilleja was the right choice for Campbell.

“There was nothing negative about the public schools at all,” she says.

Caitie explains that her own experiences growing up in public schools may have influenced her to advocate for private schools.

“In middle school… I stopped liking math and I didn’t think it was cool to be smart,” Caitie says.

Overall, Caitie says that Castilleja has been a good experience for Campbell.

“Originally we thought she was just going to go there for middle school, but in eighth grade she wasn’t interested in leaving Castilleja,” Caitie says. “It was sort of a home away from home for her.”

Campbell’s brother, Bo Field, a freshman at Paly, didn’t take to private school like his sister. He spent two years of middle school at Menlo School in Atherton and left Menlo after seventh grade, transferring to Jordan Middle School for eighth grade.

Bo says that his mom asked him to look into switching to private school for middle school, but that it was ultimately his decision.
“I thought [private schools] looked cool because they’re super fancy,” he says.

However, the private school environment didn’t work for him.

“People were way more chill at public school,” he says.  “Everybody was kind of intense about everything [at Menlo] about school and crazy about their hobbies.”

After leaving Menlo, Bo says he had a much easier time managing school and friends.

“It is easier to keep up with the work… [and] to meet up with people on the weekends because everybody lives around here,” Bo says.

Caitie says that she was supportive of Bo’s decision to leave Menlo.

“The social aspect was not good there,” she says. “The friends he has here are so down-to-earth.”

Corbin Dodd, a junior at Paly, attended Keys School for middle school before transferring to Paly for high school.  According to Dodd, class size was one of the biggest contributing factors when he chose to transfer to Paly.

“I went to a really small private middle school, just 20 kids per grade, and decided that I wanted to get to know more people,” Dodd says.  “I also already knew lots of people at Paly because I was in PAUSD for elementary school, so I wanted to reconnect with them after three years too.”

Dodd says that although he was happy with the change, the large population of students can be quite intimidating.

“The hardest part was adjusting to how many people there were at one school,” Dodd says.  “If I’m feeling overwhelmed by the amount of people, I prefer Keys, but when I’m meeting someone new from the seemingly endless supply of nice, interesting people, I prefer Paly.”

According to Dodd, although he had trouble at times switching from private to public school, he is happy with his decision and enjoys being a Paly student.

“I think it was worth it because I’ve met lots of wonderful people at Paly, become more involved in the Palo Alto community, and feel I’m getting a great education,” Dodd says.

Students often look to private school for an environment that better suits their needs. But Leslie White, a public school parent, advocate, and teacher, feels there are a number of other factors.

“Parents can feel strongly about the education philosophy or religion espoused at a school, can want their child to be part of a particular social community, or want their child to appeal to a more prestigious college by buffing up the school resume,” White says.  “Unfortunately, I think the latter is an insidious influence in Palo Alto.”

Factors such as Silicon Valley and Stanford University nearby create an environment where families are willing to do anything to get ahead.  But White feels that the typical ideals of private school, such as the all-girl environment at Castilleja, prevent children from being exposed to real life experiences.

“You have to learn to deal with the unmotivated, the cut-ups, the deadbeats, the brilliant and the dimwitted [in real life],” White says.  “As a young adult, you may not deal with all these people well, but [at public schools] you know they are part of your community, and that community is everybody all together.”

White believes that one of school’s most crucial responsibilities is to prepare students to live and prosper in the real world.  She also emphasizes the importance of working with everyone in one’s society.

“None of us really live in a Disneyland world; stuff happens to everybody and democracy requires that we include everyone in the conversation, planning, and expected outcomes,” White says.

Whether they wear a sweatshirt and jeans or blouse and blue skirt, the students walking through the underpass continue to live and act like teenagers do.  After their schooling has finished they will both enter the same world, despite their educational differences.

“If we all learn and work together,” White says, “we can live and succeed together.”