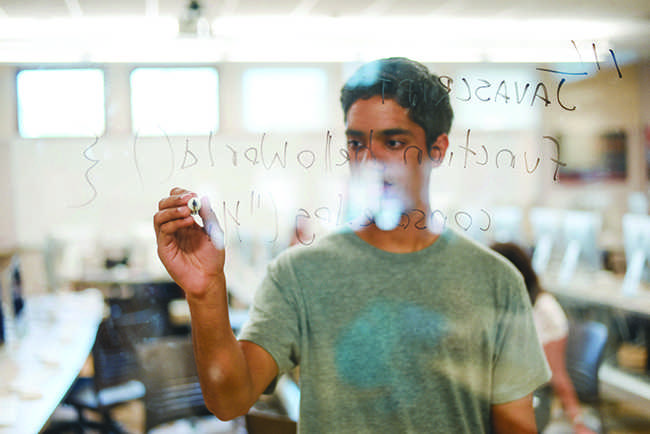 Coding For the Community

Gautam Mittal recalls opening the door, anticipation and apprehension locked in an internal grapple as he set foot inside the San Jose Paypal Headquarters, the location of the 2014 High School Hacks hackathon — his first hackathon. A crowd of students stood in the registration line, and organizers moved from student to student, distributing stickers printed with the popular hackathon catchphrase, #HELLYEAH. The room vibrated with intensity, and Mittal’s earlier unease faded into excitement. Over in the main hall, over 1,000 “hackers” prepared to endure 24 sleepless hours to build something they cared about, learn something different and meet someone new.

Henry M. Gunn High School junior Mittal, 16, is the first to be covered in Verde’s new installment of “startup kids,” a series detailing the technological experiences, accomplishments and contributions of a different local high-schooler or college student each issue.

Mittal represents a generation of individuals born in the 1990s and 2000s influenced by ambitious innovators who became overnight millionaires. Mittal, who lives in Silicon Valley, the paradise of tech opportunities, utilizes his coding not only to further himself, but also to contribute to his local community.

Spending hours poring over his father’s web development books from the early ’90s, 7-year-old Mittal began experimenting with the basics of computer coding, such as softwares HTML, CSS and JavaScript. At age 10, without any assistance except his books, Mittal completed his first app, MathNinja — a game that generated random arithmetic problems for young children and rewarded players for completing a certain number correctly with a higher belt — to entertain himself. The game has about 70,000 downloads on the App Store and around 12,000 to 15,000 users on the online version per week in the Chrome web store, according to Mittal.

“It was the first app I built, and there’s a general sense of pride one feels when you submit their first app to the App Store and Apple gives the stamp of approval,” Mittal says.

In subsequent years, Mittal created a few more of these games for his own amusement, landed an internship at a small company, and was sponsored to participate in multiple hackathons, 24- to 36- hour team programming sprints. Of them, the most notable was the University of Pennsylvania’s health-themed hackathon, through which he built an app called Kenko — the Japanese word for health — to inform health-conscious individuals of the amount of calories consumed in any food.

“You can take a picture of food, and it’ll show you the calorific content,” Mittal says. “We decided it’d be really cool if we could take a picture of something and be able to glean health information from that.”

Recently, Mittal has partnered with Copilot, a nonprofit organization that endeavors to bridge the gap between requesting and receiving mental health help, through coding for its platform.

“The idea is that, especially in PAUSD, where mental health help is a big deal… to implement it here first, because we have the infrastructure and ability,” Mittal says. 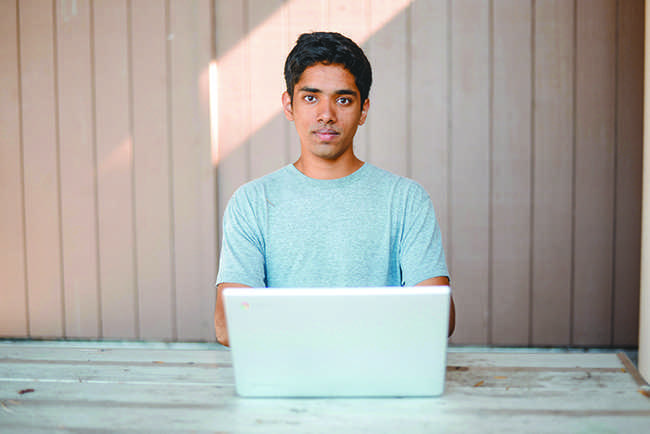 His involvement is due to personal connection to the topic of psychological well-being and its relevance to the lives of his peers, many of whom feel the pressure of school and other factors impacting their daily lives.

“Many of my friends experience some level of stress. I’ve experienced stress, and the mental health situation is absolutely insane,” Mittal says. “When I was given the opportunity to work on a system that would make a local impact, I thought it would be a great way to put my skills to use.”

Although currently only coding for Copilot’s platform, Mittal envisions a world in which, given unlimited capital, technology is developed to solve all societal welfare problems, big or small.

“End terrorism, end poverty, end world hunger,” Mittal says. “Find some way to get technology to do all of that. Send people to Mars; fix things. Things that even the richest people on the planet can’t do right now. It’d definitely be beyond Math Ninja.”