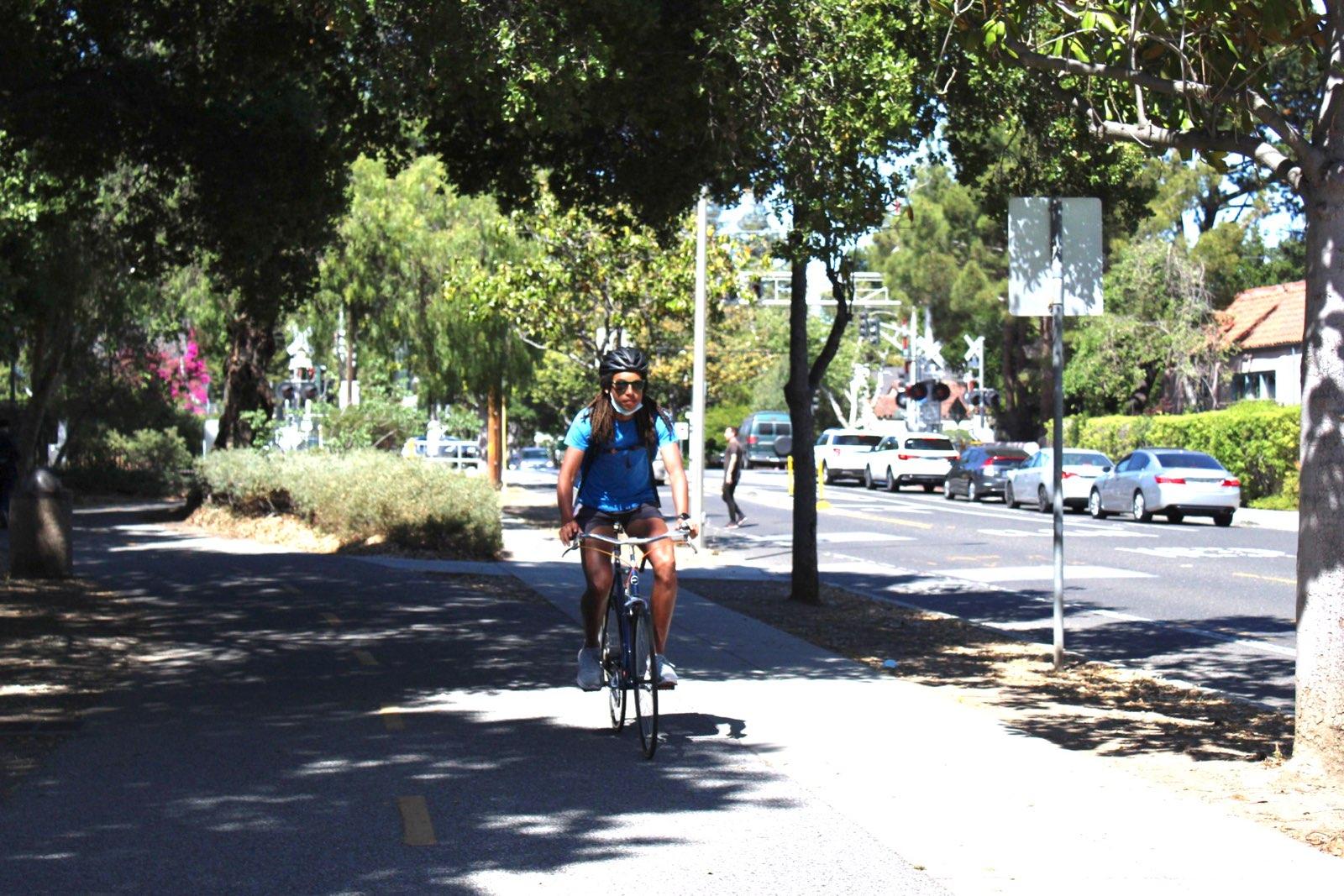 BRISK BIKER ­— Sophomore Phela Durosinmi bikes away from the Alma-Churchill crossroads, an intersection that is usually filled with both cars and bikers. “It’s always pretty scary when there are so many students in a rush to get across,” senior Hope Morita said. Photo: Anushe Irani

The Alma-Churchill intersection will be undergoing safety modifications in 2022, following a decision made by the Palo Alto City Council early last month.

Chief Transportation Official Philip Kamhi shared that the intersection is rated as one of the top five most dangerous rail grade crossings without rail separation in the state, according to the Federal Railroad Administration, and council members agreed that a plan to improve the intersection’s safety must be implemented. However, they were largely divided in their support of the two options presented by the Office of Transportation at the May 3 Palo Alto City Council meeting.

Both concepts included adding a presignal for eastbound traffic on Churchill to prevent cars queuing on the tracks, widening the pedestrian gate onto the tracks, expanding the pedestrian queuing space between the tracks and Alma, and improving the connection to the Embarcadero Trail that runs parallel to the school. To make the flow of the intersection clearer, the projects also proposed adding high visibility yellow striping along the cross walks, green markings for bike lanes and stop lines for cars.

These changes made up most of Concept 1, which the City Council ended up choosing, while Concept 2 had additional elements. According to OOT project engineer Ruchika Aggarwal who presented the project alongside Marie Mai from Callander Associates, construction will begin in 2022, while the rest of 2021 will be dedicated to finalizing details and holding another community meeting to solicit additional input.

One of the additional elements of Concept 2 was eliminating the right turn lane from southbound Alma onto Churchill and replacing it with a stormwater planter and an extended pedestrian space between the train tracks and the street. This proposal was the main topic of debate and a differentiating factor between the two projects as community members and councilmembers alike raised concern that eliminating that lane would increase congestion and raise the risk of rear-ending accidents — the main factor that pushed the council to decide on Concept 1.

“Getting rid of the right hand pocket lane would be an enormous inconvenience for parents, students and staff,” community member Kathy Jordan said. 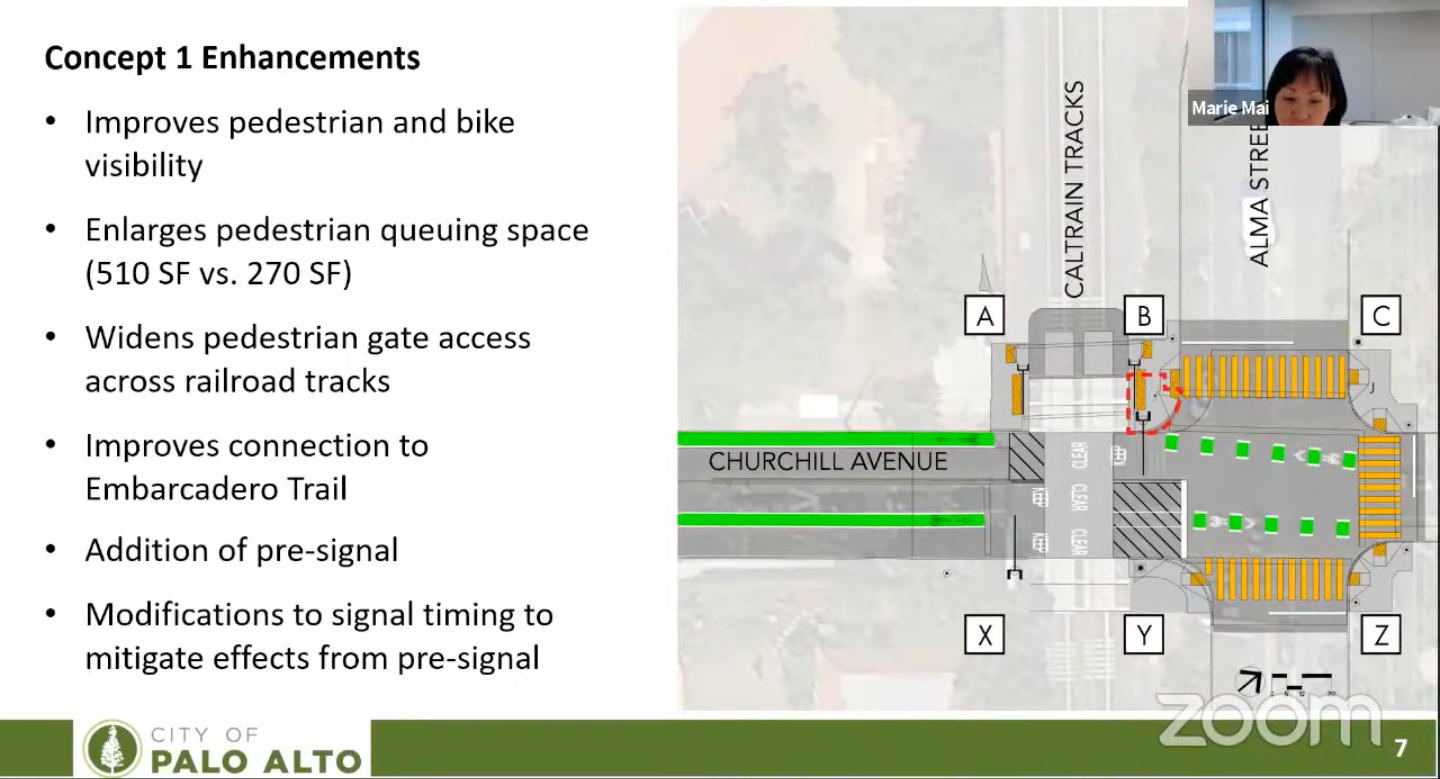 PRESENTING PLANS — Various representatives working on the project including Marie Mai discussed the changes that would be implemented in either of the two options. Photo: City of Palo Alto

Mai explained that Concept 2 would still improve congestion issues, but to a lesser degree than Concept 1. Kamhi also pointed out that eliminating the right turn lane would allow for the remaining two lanes to be widened — making turns easier for the frequent trucks and school buses that pass through.

The OOT recommended Concept 2 because it provided more safety measures for bikes and pedestrians, with the expanded pedestrian area allowing for greater visibility and a shorter distance across Alma as well as more space to accommodate large numbers of students and community members.

The Planning and Transportation Committee shared this view, with representative Cari Templeton arguing that pedestrians and cyclists should be prioritized at an intersection that sees around 300 bike and pedestrian crossings during morning rush hour. Mai indicated that the school district had also approved of the city moving forward with the plan outlined in Concept 2.

“Both of these options provide a safer — we believe — safer crossings than we currently have and that’s why these were designed,” Kamhi said. “There are additional safety improvements for pedestrians and bicyclists in the second alternative.”

Palo Alto High School senior Hope Morita, who crosses the intersection when she bikes to school, believes the improved safety for students and other pedestrians or cyclists offered in the second plan made it the superior option.

“It seems like concept one is much more minor of a change,” Morita said. “I think one of the biggest safety hazards is people just not having enough space in the morning when they’re in such a rush to get to class, so I think having as large a space as they can for that pedestrian stop is important.”

“It’s good that changes are starting to be made.”

Kamhi and others also emphasized that this was just the first step in a longer process, citing the rail grade separation project at the intersection.

With this fact and the additional safety features of Concept 2 in mind, Council Member Alison Cormak moved to approve Concept 2 and was seconded by Council Member Pat Burt, but the remaining council members were divided with the deciding vote falling on Mayor Tom DuBois who said, “I almost want to flip a coin,” but ended up opposing the motion.

“I’m going to support this but I think we’ve missed an opportunity,” Cormak said.

Morita agreed, but was glad that the city is making improvements.

“It’s always pretty scary when there are so many students in a rush to get across — they just bike across even if there doesn’t seem there’s much space,” Morita said. “It’s good that changes are starting to be made.”