Choose Wisely: Teens must develop their own political ideas 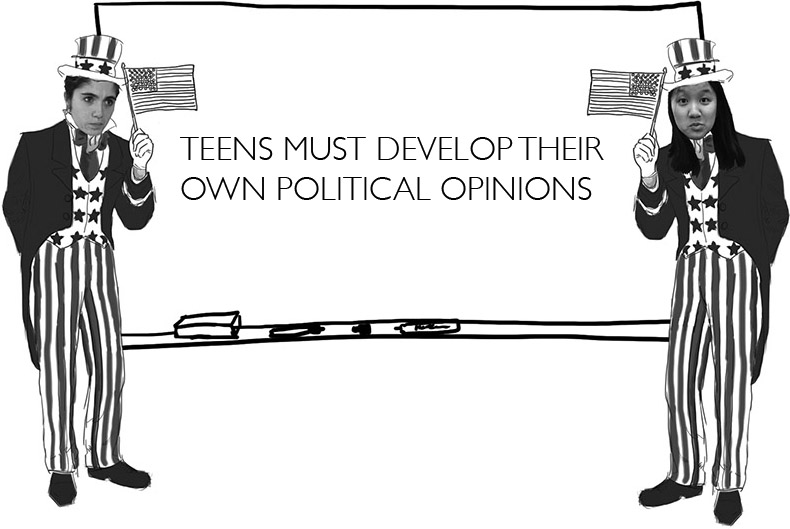 “I remember where I was when 9/11 happened” is one of the most common phrases our generation hears from adults regarding the turmoil growing out of the Middle East. Adults have repeated this phrase again and again, from the war in Iraq to Osama bin Laden’s assassination, to last November’s Beirut and Paris attacks, claiming they witnessed the beginning of a new age of terrorism in the modern world.

However, those in our generation don’t remember where they were when the 9/11 tragedy struck. Most of us weren’t even potty-trained (or alive) when every news channel in the world displayed shaky footage of the toppling twin towers.

Now closer to voting age than ever, many young adults are grappling with the question of how they are supposed to vote when they didn’t experience events like 9/11 that have shaped the American political landscape. The answer may seem obvious: it is essential for young voters to understand the history and platforms behind current political issues to form their political perspectives. Yet, many teens still fail to do just that. Especially given Palo Alto’s overwhelmingly liberal environment, students need to find the courage to forge and express their individual perspectives.

Developing your own opinion is not only essential to choose the candidate that suits your needs, but to develop political efficacy. When people are informed about political issues, they begin to understand how politics can affect their daily lives and how they can affect politics.

While informing oneself on present political issues, one must also investigate political history. When examining the past, we have to understand our mistakes so we can avoid them in the future. We also must understand the complexity of the world we have experienced and how we can improve such a world through our political action.

Given our position as the post-9/11 generation, we need to spread our perspective as American citizens who have only lived in a United States under the threat of terrorism. Teens of today only know a world where airplane passengers are checked for explosives and Western society links a whole religion to terrorism. We are the generation with the most experience with the modern reality and can potentially hold the most solutions to the problems of the post-9/11 world.

Although many teens may not be able to vote, they still have a political voice. In this generation of social media and technology, we have a duty to both inform others and spread nuanced ideas, diversifying the pool of ideas in a political campaign and encouraging others to think in new ways. In place of a ballot, our generation’s tools of change are screens and keyboards.

Yet in this area, expressing one’s own opinion can be especially difficult. Palo Alto holds a liberal bias, as 55.6 percent of Paly students identify as liberal against the 7.0 and 25.4 percent that identify as conservative and moderate, respectively, according to a Verde survey. When we were younger and our parents discussed political issues, many of us would agree with their opinions because we trusted them as our parents. It’s important to understand that the ideas we may have taken as our own are actually influenced by our parents, our friends and our teachers.

Although it may be easier to assume that the adults around us have the correct view on current political issues, we have to come to our own conclusions about the past to find our own political voice in the present. To accomplish this goal, we must read as much history as available, watch as many political debates as possible, and have as many discussions as we can.

To avoid ignorance, we must be open to all political ideas, rather than dismissing different views. If students simply take on the majority opinions of those around them, the homogenous political atmosphere of our generation — once it comes to be a significant force — will prevent political innovation and discussion. We as voters will come into the ballot, thinking, “I am voting for this candidate because everyone else is.” We are a democracy, so let’s act like one.