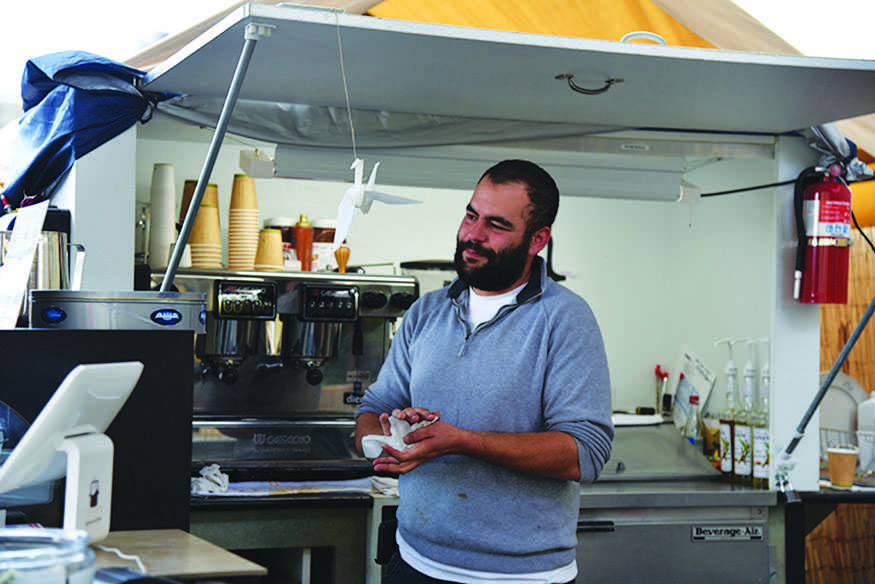 Although the sky is a little overcast, the glass-colored sidewalk of California Avenue   glistens as we pass by the supermarkets and office buildings. Squeezed between a yellow insurance building and white walls is an alleyway, with Backyard Brew’s logo of a steaming cup of coffee sandwiched between three lines of text: “Backyard Brew Espresso and Tea: Come Chill With Us.”

The little coffeeshop at 444 California Avenue is literally in the backyard of Palo Alto’s shopping district. Soft music flows from a stereo as we arrive, immediately creating a relaxed and creative atmosphere. The entire coffeeshop is outdoors, with the coffee bar and register under nothing but a simple roof to the right, and tables and chairs covered in sharpie scrawls under a canopy to the left. Water fountains filled with succulents are placed randomly through the setting.

Ryan Khalil, the founder of Backyard Brew, Palo Alto High School Class of 2009, and drew his inspiration for the coffee shop from his time in high school.

“I knew what it [Palo Alto] was like and what it became, and my goal was to design a place to help people decompress,” Khalil says. “There’s not much place to decompress in Palo Alto. That’s why I don’t have any clocks. I want to make sure you come here and you enjoy yourself.”

Adil Ahsan, a self-dubbed consultant and a fellow member of the class of 2009, helps Khalil ensure that his business runs smoothly. Ahsan says Backyard Brew provides a friendly place within Silicon Valley, an island of tranquility in a sea of increasingly hostile national sentiments.

“It’s difficult to tackle a giant problem like the national climate, so it’s not something we’ll affect today, tomorrow, or even a year from now, but I think this place is in for the long haul,” Ahsan says. “I always say that if you’re not doing anything, at least you’re not being mean. We’re doing a one up: we want to provide a space for being friendly and tolerant here. If we can change even one person’s day, then that’s great.”

Backyard Brew’s emphasis on friendliness and love is evident, not only from its customer service, but also from the quality of its food and drink. Many of the available offerings are reminiscent of snacks a grandmother would offer her grandchildren after a long day of school, and elicit content feelings after consumption.

The minute our teeth sank into the soft crust of the cookie, a powdery sweet taste seeped into our mouth. Shreds of dry coconut added a little extra crunch in the filling. The filling itself was a crumbly sort of powder, the kind that melted on our tongues effortlessly.

The cookie part had a soft texture, like a firm cake. Although it wasn’t as flavorful as the filling, the coating was a lovely accompaniment to the center. We gave the alfajor four stars because it was rather pricey for a small macaron. 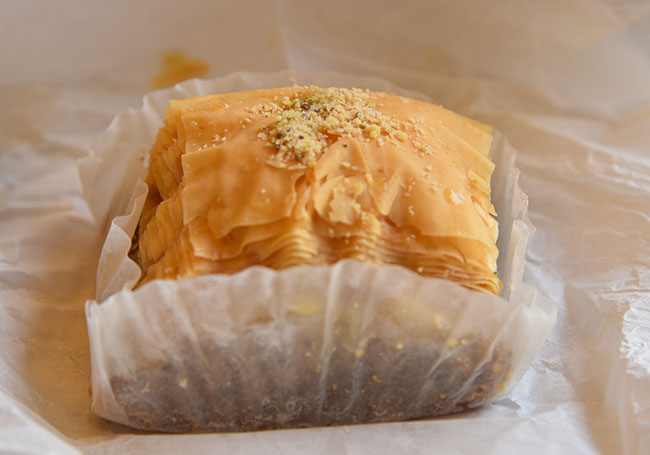 This sticky square was a flavorful punch to the tastebuds, worth a 4.5/5 stars. Photo by Stephanie Lee

The second dessert we unwrapped was the halva bar. It looked like a rectangular slice of pie more than anything; the top was very crusty and flaky like a pie crust, and the bottom was very sticky and dense.

Unpeeling the halva bar from the paper, we took a bite and felt the crust crunch underneath our teeth. The bottom was very sticky, sugary sweet, and chewy — however, the bar made us thirsty because it was so sweet. Still, we were literally licking our fingers in the end. The taste and texture were reminiscent of brown sugar and caramel due to the stickiness and flavor from the bar. Because of its decadent quality and sharp contrast in both texture and flavor, we give it 4.5 stars. However, some of the sweetness was a bit overwhelming.

The presentation of the tea leaves made the drink a treat for both the eyes and taste buds: six vials nestled in the dark velvet lining of a black chest. The French press itself was no disappointment; it added to the aesthetic of the creative, earthy atmosphere.

The tea was faintly sweet but very pleasant. The jasmine flavor itself was not only strong but also prominent. There was a very fresh and crisp edge to the tea, something we’d rarely tasted before in other teas.

While discussing the origins of Backyard Brew and their motif of love, Khalil mentions this drink as an example of the love they pour into their products.

“The Bedouin Brew is a recipe passed down to me from my grandmother,” Khalil says. “I get here at 5 a.m. to start the preparation for that. That’s what I’m talking about when I say I want to prepare everything with love.”

The coffee came in a small paper cup, sending fragrant spirals of steam up into the sky. The sweetness of the cinnamon and the warmth of the cardamom made the drink taste like Christmas, and the taste faded until we were left with just a smidge of bitterness on the tongue.

Although the drink was generously spiced (and highly caffeinated, as Khalil warned) the small portion size allowed us to enjoy the flavors while preventing the brew from overpowering the sweets.

The name of this drink, which references the “Y U No” meme, had us giggling.

The decaffeinated coffee was aromatic, giving off sweet smells and those reminiscent of roasting nuts with a caramel-like aftertaste, derived from the clove and cardamom that Khalil brews it with. Thankfully,  Thankfully, the coffee was softly bitter, rather than astringent.