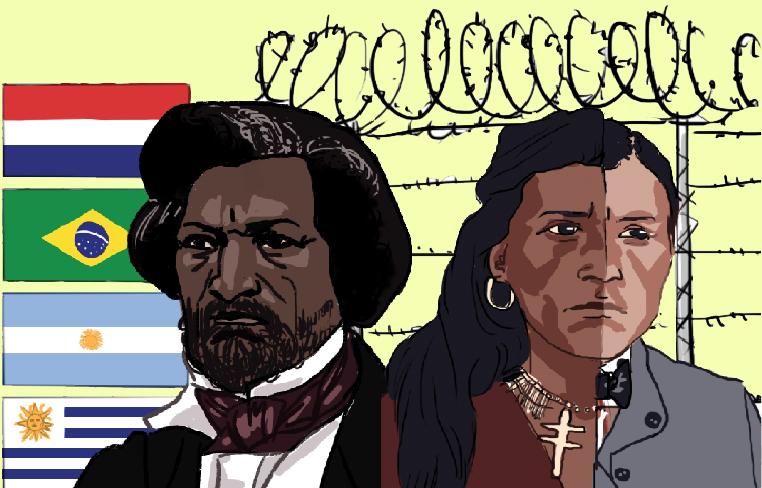 Checking the Source: Scrutinizing biases in our curriculum

Palo Alto High School senior Clare Kemmerer leans over her laptop computer, her keyboard clacking as she searches for her presentation. Around her, the classroom buzzes with conversation. Students from freshmen to seniors, huddle in clumps, giggling as they eat their lunches.

Kemmerer glances up at the screen, clicks her keyboard again, and replaces the screen’s blue glow with her tan colored presentation slide. She stands up and finds her place to the left of the screen, her hands cupped together.

The conversations fade and all eyes rest on Kemmerer. The history lecture about the Crown Heights Riot starts like any other, but the Untaught History Club soon demonstrates its unique learning environment. As Kemmerer teaches the material, students raise their hands with insightful comments and connections to current events. One member shyly raises her hand and adds in a whisper how the riot reminds her of the Ferguson incident last year.

Another member frantically waves his hand in the air and asks her to google the current racial demographics of the Crown Heights neighborhood in New York City. With the new information, other students chime in, some politely raising their hands and others yelling across the classroom, with insight on the current moral and racial aspects of the issue. As always, the members of Untaught History Club relate history to their daily lives.

Palo Alto High School’s Untaught History Club is one of a few forms of student action in the area of history education. Students teach each other history that is not covered in high school history courses every other week. During club meetings, they  relate controversial history to the issues of the modern world. According to club founder Clare Kemmerer, Untaught History Club discusses history they wish would be added to textbooks and the Paly history curriculum.

Kids are going into their classrooms and asking ‘Where is our history?’” junior Emilia Diaz-Magaloni

Students across the country are taking similar action. This summer in Texas, a high school student noticed that his McGraw Hill history textook referred to slaves as “workers.” What ensued was an uproar on social media started by the student, spreading across the country through the #blacklivesmatter campaign on Facebook, and leading many people to question the way controversial topics are presented in textbooks in all parts of the United States, including California.

On Oct. 1, Gov. Jerry Brown signed Assembly Bill 146 which mandates including an explanation of the 1930s deportation of citizens of Mexican descent in future versions of California history textbooks.

However, textbook reform is a slow and tedious process, according to Jacklyn Edwards, instructional supervisor of the Paly history department. The same history textbooks have been used at Paly for about 10 years and A.B. 146 is one of the few reforms executed in California after the implementation of Common Core in 2014.

According to Edwards, textbook reform is a complicated process because many people with varying opinions are involved in trying to accurately portray history in school textbooks, which are a main source of information for students. Due to the nature of textbook reform and adoption, students and teachers have to work through the controversies in textbooks for years before the text is modified.

The Root of the Discussion

Because textbooks are secondary sources written after events take place, they are especially prone to biases from the author’s interpretational approach. The author can choose which events and historical figures he or she deems important, a choice that ultimately defines the history that students learn.

Authors attempt to be as impartial as possible in their choice of incorporation, but there will always be disagreements regarding which events should have the privilege of inclusion according to Paly U.S. History teacher David Rapaport. Often, a subject may be awarded one sentence when others feel it should be given at least a page of explanation. Failures to thoroughly cover and explain a subject result in a student never fully understanding the significance of a topic. 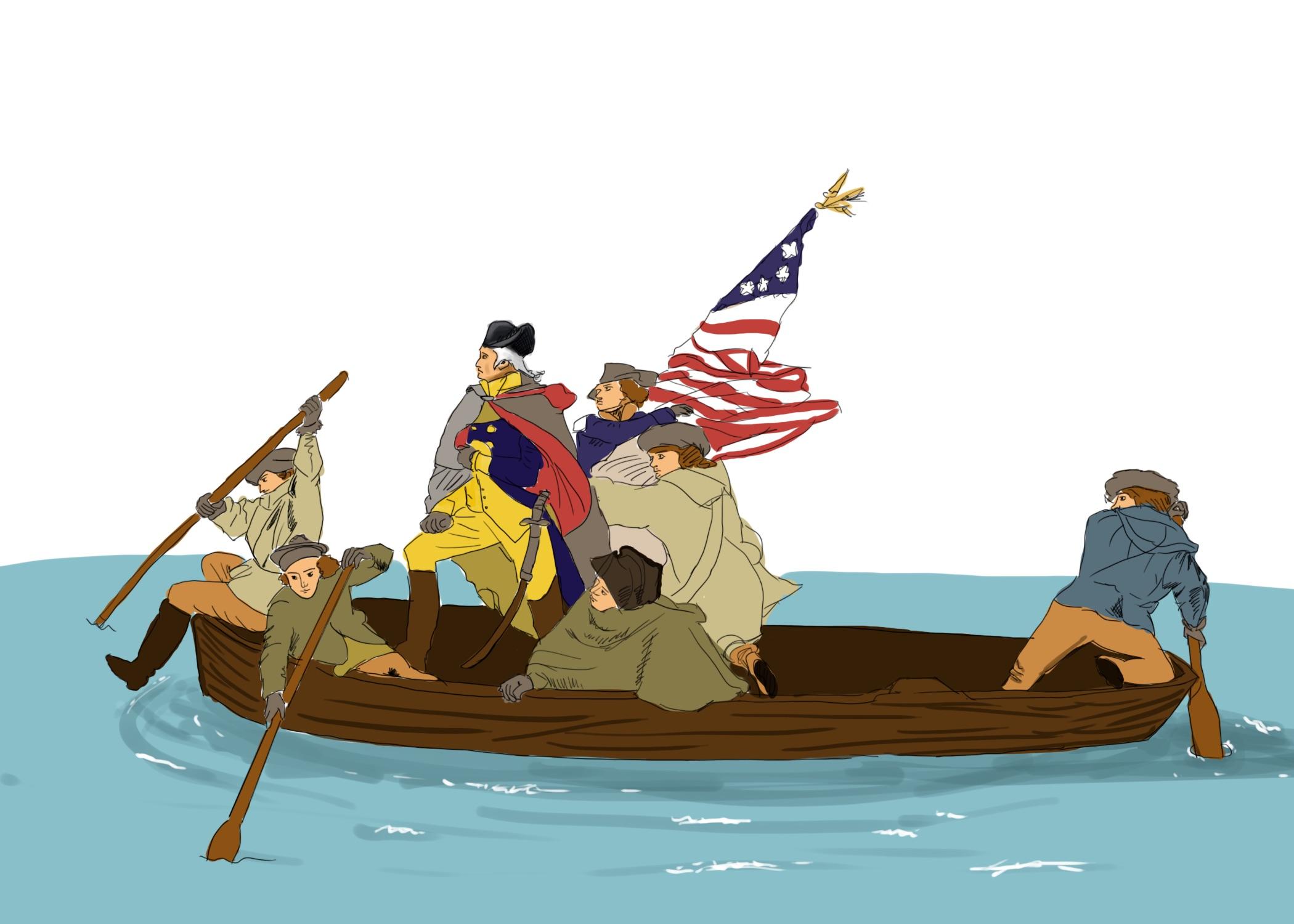 TEXTBOOK EVENT George Washington and his troops are portrayed as brave and strong soldiers on their way to defeating the British.

However, biases in textbook content are not exclusive to history. According to biology teacher Elizabeth Brimhall, author bias in descriptions of scientific concepts can also mold a student’s understanding of certain topics. To address this issue in future biology textbooks, Brimhall and Stanford University graduate student Brian Donovan are conducting research regarding biases in biology textbooks and their effects on students’ understanding of race and genetics.

“They [students] are probably not aware of the effects because they are really subtle effects,” Brimhall says. “You get this subtle link between one genetic trait and race, and the trouble is your mind might extrapolate from that these other things could be race too when race is not based on genetics. It’s based on what society has defined it [race] as.”

In order to address student prejudices and ideas regarding the correlation of race and genetics, Brimhall ventures beyond the textbook in her 9th grade biology classes. She guides hands-on activities and discussions with the goal of highlighting an issue which the textbook fails to address.

In history courses, teachers often have to seek supplementary material such as diary entries or newspaper articles from the time period in addition to textbook readings. By incorporating primary sources, history teachers aim to represent key historical events and figures in the depth necessary to do the subject justice.

“Frederick Douglas is given a photograph and a few sentences in the textbook we use, and I don’t think it’s very reflective of the importance of Mr. Douglas’s narrative and story,” Rapaport says. “So we have to go beyond what the textbook allows … because it’s insufficient to rely on the textbook as the sole source of historical narrative on a particular subject.”

Without being exposed to different sources, Rapaport believes students are not in a position to cultivate their own views on a subject. He says expanding on the curriculum through primary sources provides students contrasting viewpoints on a historical topic and thus, the big picture and objective explanation. Senior and Untaught  History Club member Bryn Sullivan says she was exposed to a primary source textbook, “American Spirit”, in AP U.S. history which presented perspectives of events she had not contamplated.

With similar goals to Untaught History Club, the next step teachers like Rapaport take is relating the issue at hand to the modern-day world. Without finding the relevance to current events, many students lose the value of history and fail to understand the importance of the subject, according to Kemmerer.

“I think current events are key to history education,” Kemmerer says. “Even at the basic level of getting students interested and then you can get into what the social implications of that [historical event] are.”

Although textbook authors may understandably skip over controversial topics, Kemmerer says they are crucial for students like herself to learn and apply to their daily lives as residents of the U.S. Other students, such as junior Emilia Diaz-Magaloni, wish that the breadth of history in textbooks reflected the diversity in the modern world.

“School is one of those places where they should be able to give us the facts and we should be able to form our own opinions about it and gain a more worldly perspective,” junior Emilia Diaz Magaloni says. “They [textbook companies] should be less afraid to add those controversial things into the textbook. That would be a good place to start.”

If a whole continent is left out of a history textbook or minimally explained, Diaz-Magaloni says, students, including herself, may lose a chance to understand a whole section of the world’s population and possibly even their own heritage.

“I would like to see more of an emphasis on Latin America in textbooks,” Diaz-Magaloni says. “A huge portion of the population in California is Latino or Hispanic, and kids are going into their classrooms and asking ‘Where is our history?’”

Briefly covering Latin America and other subject matters in history keeps students locked in their own prejudices, according to Diaz-Magaloni. Rapaport says students also fail to find their own point of view when they are constantly exposed to the same kinds of biases. According to the New York Times, history textbooks are primarily written by white males, so students are constantly exposed to similar views.

Kemmerer personally experienced the focus on “white” or mainstream topics in her APUSH class.

“There was one sentence on AIDS,” Kemmerer says. “That is very minimal representation of an event and form of discrimination that was very powerful for America and Americans. I just thought of that as very odd because a lot of those biases are still occurring in society, and it was amazing to me that other students didn’t realize that it was missing.”

In Untaught History Club, Kemmerer hopes to address the history that students do not “realize is missing” from their textbooks. Although the club is small and may be overlooked by those with the power to alter the Paly history curriculum, the club establishes the student body’s opinon on topics like these — students want to know more. In future years, Kemmerer hopes the club will keep attracting a wide range of students and exposing them to untaught history.

“I would really like it [the club] to continue after I graduate and get larger,” Kemmerer says. “Even when it’s just the small group, I like having the space to discuss history. You can’t really stop the discussion once it gets started.” v