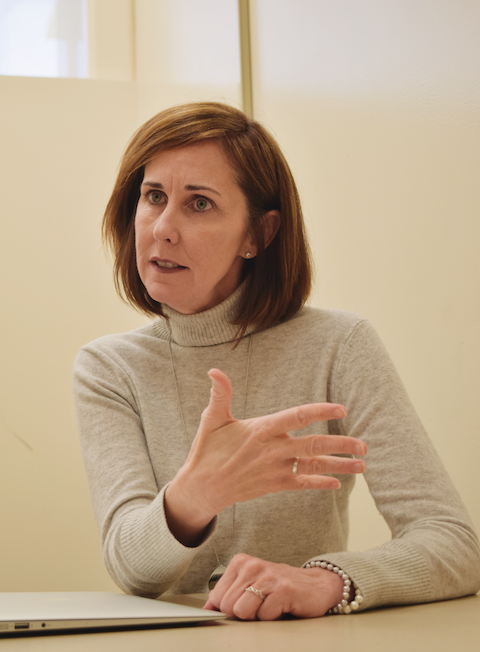 With a warm smile, Palo Alto Unified School District’s newly-appointed Title IX coordinator, Megan Farrell, walks into the conference room and begins to tell her story. Besides being a mother, a certified yoga instructor and an avid marathon runner, Farrell also combats some of the most controversial and challenging issues in the district.

Palo Alto Unified School District is no stranger to issues surrounding sexual harassment and discrimination, with over 70 open Title IX investigations. With national movements like #MeToo and #TimesUp gaining recognition on a large scale, Verde sat down with Farrell to discuss how the issues encompassed in these rising movements are being discussed and tackled locally.

Farrell has been a champion of women’s rights throughout her life. When it came time to choose a career, she knew she wanted to pursue something in the realm of gender equality.

“Discrimination in the employment field was something that, in the 1990s as I was graduating from law school, I wanted to focus on,” Farrell says.

It wasn’t until later that she realized her additional passion for education.

“Bringing both of them [women’s rights and education] together is something that has really been a joy in my life,” Farrell says.

Being a Title IX coordinator was the perfect way to do so. Title IX is a set of federal legislation established in 1972 to promote gender equality in education. Since then, its focus has shifted from fighting discrimination in school sports to fighting against a broader range of misconduct and discrimination issues.

Before joining the K-12 sector at PAUSD, Farrell worked at Notre Dame of Maryland University as the Title IX coordinator, and later as an external consultant working with schools on Title IX policies and procedures.

In addition, for the past six years, Farrell has undergone training regarding how to conduct Title IX investigations and what the role of a Title IX coordinator entails.

“To be able to be in the K-12 area is really inspirational to me. Having impact at that stage of people’s lives can really last a lifetime.”

“To be able to be in the K-12 area is really inspirational to me,” Farrell says. “Having impact at that stage of people’s lives can really last a lifetime.”

“Officially, the number one priority, as I discussed with the superintendent, is compliance,” Farrell says. “There’s two elements to that. One is the external compliance, which is dealing with the Office for Civil Rights and California Department of Education, and the requests that they must

On the external front, Farrell describes a strict timeline that must be met.

“There are a lot of things to be done. The Office for Civil Rights resolution agreement with the district set forth a lot of requirements that we [the district] have to meet annually,” Farrell says.

The other aspect of her job is what Farrell describes as the internal compliance.

To Farrell, these compliance matters are one of the most challenging aspects of her new job.

“I have been dealing with a lot of different issues around the compliance matters coming in, so it’s always an evolving workload,” Farrell says.

Despite the challenge of her work, Farrell finds joy and excitement in her job’s ever-changing daily routine.

“Usually, I come in and check anything that’s kind of an emergency,” Farrell says. “I usually prioritize these compliance issues first thing. If I have to conduct investigations I do that, but a lot of my job is checking in. I can’t say one day is like the next.”

Farrell alludes to a cultural and generational difference in the perception of Title IX that has developed over the course of recent decades.

“When I was in high school and college, there was a lot of behavior that took place that was easily dismissed and not taken very seriously,” Farrell says. However, due to the increased emphasis on following procedure and bringing perpatrators to justice, Title IX has become more effective in many ways.

Under the Obama Administration in 2011, the Title IX protections were expanded to prohibit discrimination based on gender identity.

“When individuals engage in behavior that challenges gender norms, they may face discrimination or harassment, and this behavior is now prohibited under Title IX,” Farrell says.

In the future, Farrell hopes to improve the role of Title IX in the district.

“[I hope to] work with school leadership to increase transparency and accountability … and support the schools in providing thorough, timely investigations,” Farrell says.

Similarly, Farrell encourages all students to reach out to the Title IX office and continue to ask questions.

“A lot of people think they know what it [Title IX] is, and you have to peel it back a bit and learn a little bit more about your rights and responsibilities,” Farrell says.  “Our office can assist people with understanding that. Seek help if you need help, because there are a lot of different ways to get help here.”