Alex Simand, a scraggly bearded, tech engineer, walks onto the platform at 4 p.m. sharp, heading towards the ticket booth, where he fishes out a few dollar bills and some change for his ticket. The machine spits out a thin paper slip punched with a combination of numbers that grants him access to the Bay Area’s Caltrain. Simand takes his place and stands alongside the other commuters — millennials tired from work and some Generation X-ers clad in cycling spandex — behind the yellow boundary of the platform. The train shuffles in, the doors open and close, and the train departs. For Simand and many other commuters, this process is a mundane routine and an indication of a workday’s end.

Unlike New York and Tokyo, where the train is an integral part of the culture and serves to define these cities, the Bay Area lacks a transportation system that is viewed as such a lifeblood. While Teslas and BMW’s rule the roads, the train remains but a footnote in Bay Area transportation — a means of commuting for San Francisco dwellers and 20-somethings.

Some may see the Caltrain merely as a vehicle to shepherd employees of the tech industry to and from their jobs. However, further inspection reveals the assortment of narratives, lives and experiences, which truly represent the Bay Area.

My process was straightforward — ask a variety of passengers three questions: Where were you last? Where are you going? Why are you going there?

Despite initial hesitation, three individuals were especially willing to reveal their stories of immigration.

To these three people, the question, “Where were you last?” elicits not their literal former destination, but their accounts about migrating to the Bay Area. Each individual struggled, and still struggles, with being an outsider in an area where individuality is celebrated. But, what is more significant, is each person’s ability to surpass that beginning uneasiness and strive towards happiness.

In a span of fifteen minutes, every individual described his or her past, present and future and after this brief respite, each continue their lives in the same staccato.

It’s half past four on a Friday afternoon and everyone on the train shows signs of a hard week’s work — tired faces, some closed eyes, occasional sighs. Despite a few young men discreetly drinking cheap beer (although, alcohol is allowed on the train before 9 p.m.), the general population is engrossed in tiny bright smartphone screens — headphones in, ready to shut the world out.

Alex Simand fits in with this crowd, clad in a classic red plaid shirt and blue jeans, his typical casual Friday attire. Simand’s story, however, does not.

Simand was born in Nizhny Novgorod, Russia, where his parents took a roundabout path through Austria, Italy and Ukraine in 1989 to eventually settle in Toronto, Canada, where his aunts and uncles lived. To escape communist Russia, his parents gave up their citizenship and the few rights the Russian government had allowed them.

He isn’t clear on the exact details of his family’s migration to Canada save for the fact that, “They took a plane,” Simand says, as he laughs lightly. 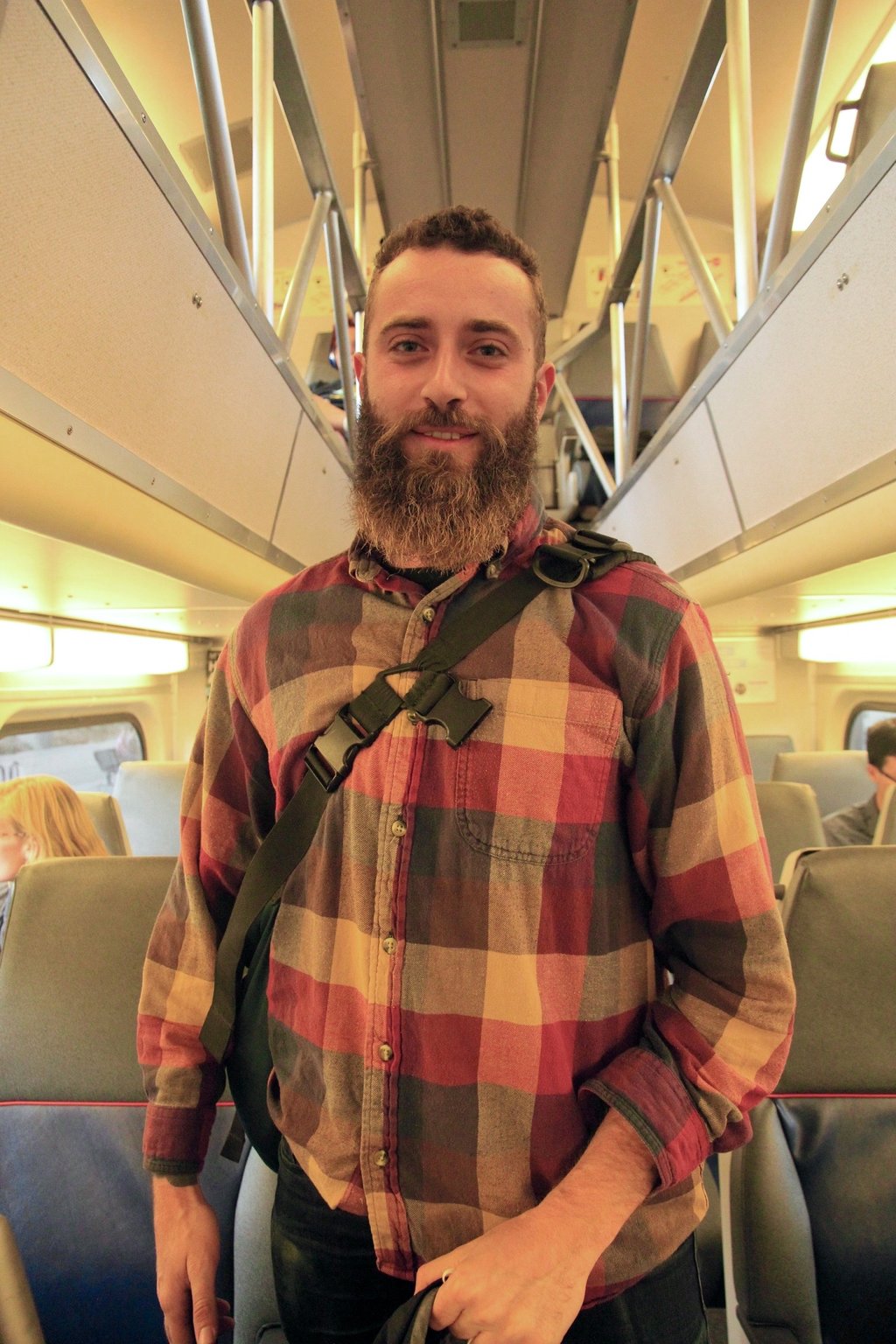 He recalls his immigrant experience as something that constantly informs his perception of himself and others. He is aware of the effect cultural norms have on a person’s day-to-day behavior, mostly because he sees these perceptions in himself every day. For Simand, a glaring example of these cultural perceptions occurred during his childhood in his suburban neighborhood in Toronto.

“Our neighbors [in Toronto] would often complain to us because we would do things that in Russia would be totally fine,” Simand says. “We would chop down trees for fire and we slaughtered lambs in our backyard … People would look at us, like we were strange, foreign — which we were. Things that seem normal in one culture seem completely terrifying in another.”

As an electrical engineer in North San Jose, Simand finds his job tedious, yet steady. When I ask him whether he loves his job, he immediately says “No” and sits up in his seat. He is tired, but not in the way that the other passengers are wanting to curl up in bed and fall asleep. No, after 10 years of being an engineer, Simand is tired of following an unfulfilling path — he yearns to chase his dream of creative writing.

Every day, after nine hours of work as an electrical engineer, Simand goes home to write poetry and nonfiction personal essays, often drawing inspiration from his immigrant experience. In six months, he will graduate from Antioch University with a Master of Fine Arts in creative writing. After getting his MFA, he plans to pursue creative writing full-time.

“[It’s] terrifying,” he says. “But I think it’s supposed to be terrifying. Otherwise, it doesn’t seem worthwhile.”

Simand is soft-spoken and self-admittedly socially awkward, but as he continues to talk about the possibility of becoming a full-time writer, he raises his voice. He is excited and hopeful for the future — a future that will allow him to express and reconcile his past and present.

“It feels right,” Simand says, “I’ve been an engineer for so long, and it hasn’t felt fulfilling. Maybe this other thing will be wrong, too, but I just need to find out.”

At evening, the train breathes a new air. The tension of exhaustion is replaced with the opportunity of an unforgettable night. The train turns industrial, its fluorescent lighting growing stark and reflecting on the vinyl seats and floors.

Ives Galley is a night rider. Like Simand, he has an immigrant experience to share, although  bears a sense of urgency — to get into America and then get out. 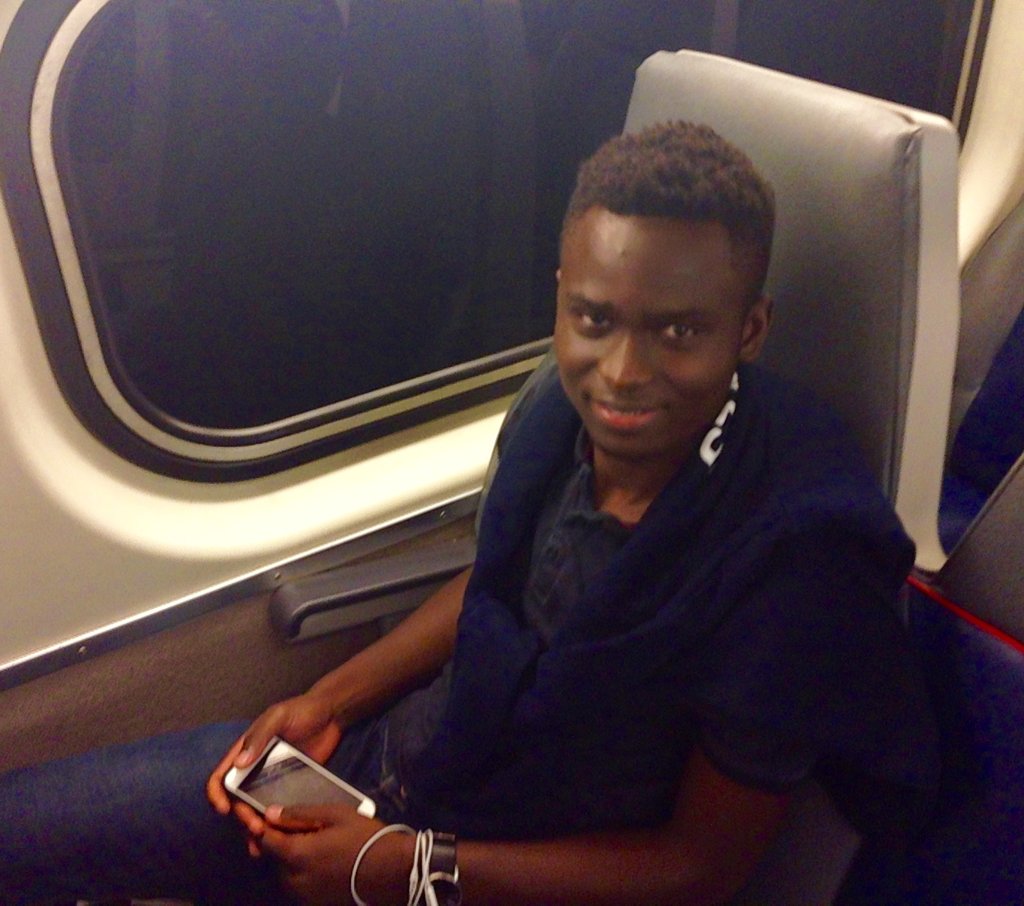 Ives Galley was born in Togo, although he rarely tells people this because of the confusion it causes. Most people don’t know what and where Togo is, so he feels the need to add ‘West Africa’ — a label that is not exactly representative of where he is from.

“People ask me like how did I get here, right, and sometimes I feel like just telling them that I just walked here,” Galley says, laughing as he twirls his earphone bud around his finger.

He seems frustrated about my constant questions about the differences between Africa and America. Again and again, Galley assures me that they are basically the same.

“I understand that some people are curious about knowing about where I come from, my culture, and all those things, but honestly it’s not that different,” he says. “It’s developing, but it’s a beautiful country as well, right? It’s not like we are a day behind.”

Galley is riding back to UC Berkeley, where he currently studies chemical engineering. He plans to apply the knowledge he will gain from Berkeley in a more far-reaching way. Although not noble in his eyes, Galley intends to move back to Africa following graduation to work in Africa’s private oil sector, with the lofty goal to reform the corruption and general employee qualification in the African oil industry.

“I don’t want to stay here,” Galley bluntly says, “I just want to get educated and then go back to give back.”

Another night passenger, Julia Burnett, just came from a Stanford football game, although the game only started 35 minutes ago. When I inform her of this, she shrugs knowingly and says that she’s going to pick up her friend at the airport — the same friend who encouraged her to pursue a long-distance relationship with her boyfriend who lived in San Francisco when she lived in Boulder, Colorado.

“I told my best friend, ‘Don’t let me fall in love with him — he lives so far away … Blah. blah. blah,’” Burnett says, “But, after she met him, she was like, ‘You guys are going to get married. You are perfect together.’”

Her face is covered with warmth and pure giggly happiness. In typical teen-girl fashion, I listen intently as she lays out her movie-like romance story and reveals that she moved to San Francisco to be with her boyfriend. The process of making friends proved especially difficult, which reminds her of her teammates on her former college soccer team.

“I loved my teammates,” Burnett says, “That’s what made it [playing soccer] worth it.” 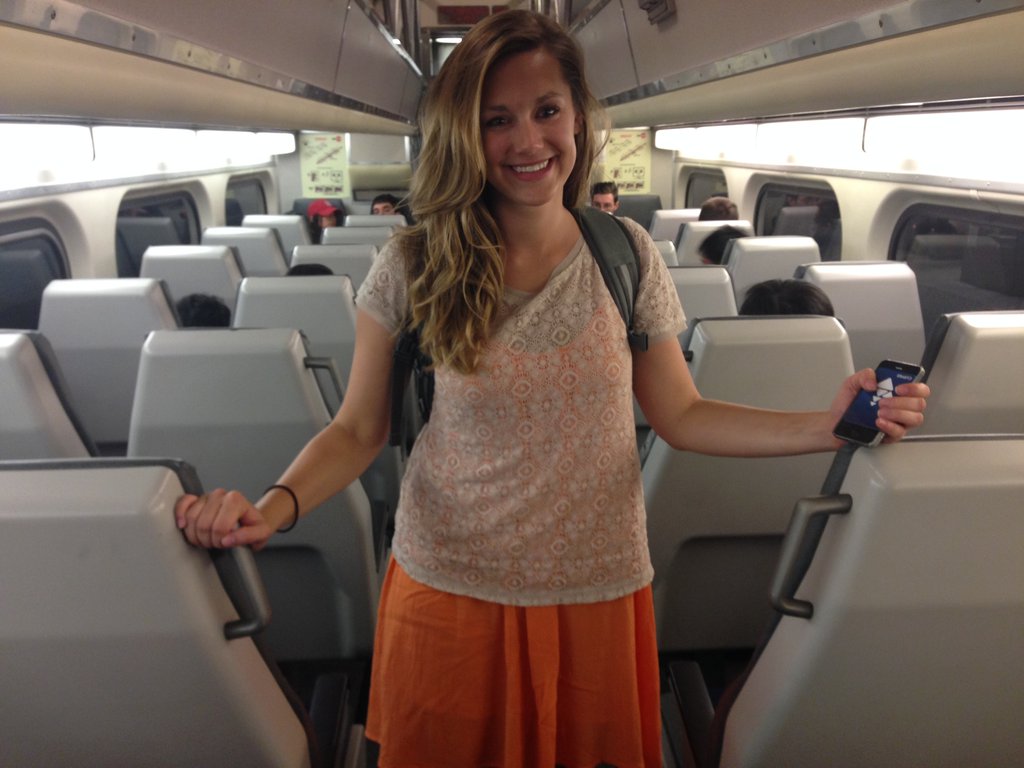 Burnett, who played Division 1 soccer at the University of Colorado at Boulder, was cut from the team after her second season as a freshman.

“I definitely cried,” Burnett says, “I cried my eyes out.” She repeats this last sentence again, but the second time around it’s filled with a deeper reminiscence of a darker time.

“I’m always making steps towards happiness,” she says. “I think that should be everyone’s end goal.”

To achieve this happiness, Burnett has recently quit her job and is now looking for a new job in tech.

We talk for a few minutes, as she gives me advice on sports, college, and the future. For a brief moment in time, she becomes like a big sister to me. But soon a cheery train conductor announces, “MILLBRAE,” and Burnett gives me a warm handshake as she gets off the train. Like Simand and Galley, Burnett quickly exits my life, leaving only the trace of an email address and phone number to prove that the conversation ever happened.

After I hop off the train to meet bright lights illuminating the platform, the train chugs off into the distance.