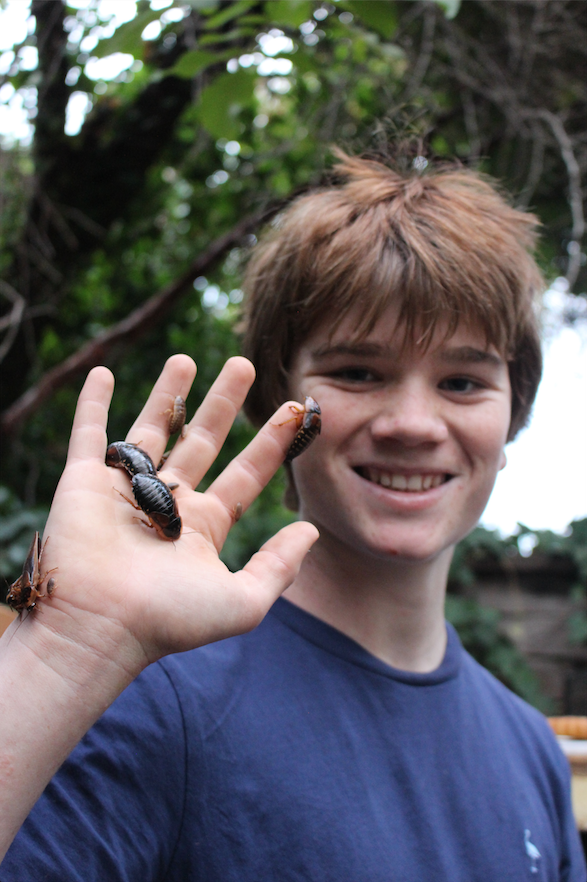 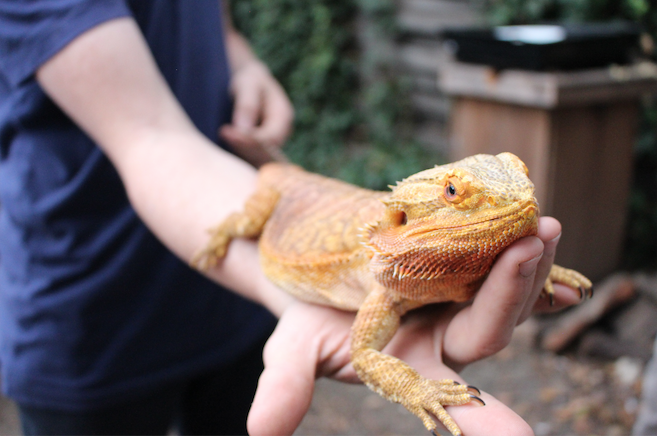 LIZARD LOVE — Day Ham holds his bearded dragon Dezi-girl. Her need for a nutritious feed inspired him to start breeding cockroaches. “I started doing research trying to find out what the best type of feeder was [for Dezi-girl],” Day Ham says. “I learned that breeding them myself would be best.”

Many students can boast of once taking care of a lone beta fish or a potted plant, but how many can say that they’ve looked after tens of thousands of cockroaches, two rabbits, a bearded dragon and a black widow, all at once?

Callum Day Ham, a junior at Palo Alto High School, can lay claim to this amazing feat. His backyard is home to around 40,000 dubia cockroaches, all scuttling about in egg filler flats neatly stacked in plastic storage containers. As he holds up a palmful of his roaches, he also lovingly clutches a pale orange bearded dragon and proudly shows us his black widow.

Day Ham admits that he isn’t sure where his love for animals comes from. Although his paternal grandfather grew up driving tractors on a pig farm, and his maternal grandparents are avid birdwatchers, his parents do not share the same passion.

“My dad’s more tech and my mom’s an artist,” Day Ham says. “It sort of skipped a generation.”

His ventures began with Dezi-girl, Day Ham’s bearded dragon. She is precisely why Day Ham began keeping cockroaches. Originally called Dezmond, her name was changed when Day Ham discovered that she was not male. In search of a healthy and cost-effective feed for Dezi-girl, Day Ham decided to supply the food himself.

But running a cockroach farm is no easy task. To keep the cockroaches healthy and thriving, Day Ham requires materials such as heat pads, 20-gallon tubs and a temperature probe; his farm initially cost about $1,000, even though he set everything up himself.

Fortunately, Day Ham found a way to cover his costs, and then some. When a family friend expressed interest in buying Day Ham’s cockroaches as a feeder for his chickens, Day Ham realized his hobby could become a successful business venture.

Now, Day Ham sells his cockroaches to pet stores as a feeder for reptiles. Initially, Day Ham pitched to PetSmart, but found that a test run with the retail chain would be too difficult. He then successfully formed a contract with The Reptile Room, a local pet store in Hayward, driving there on weekends to deliver cockroaches. 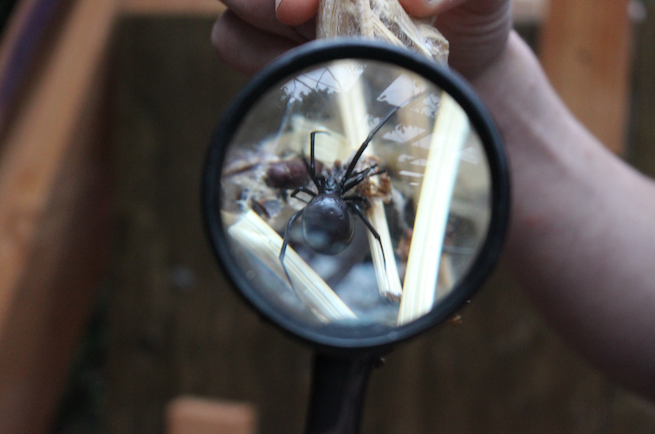 A SILKY SITUATION — Day Ham’s black widow scuttles on a bundle of straw. He once bred black widows for their silk. “I never got around to selling it; it was just interesting,” Day Ham says.

“We have a nice relationship with them [The Reptile Room],” Day Ham says. “They buy all the roaches that I produce, so if I produce more one week, they just buy more.”

Day Ham’s love for critters has manifested in many other unexpected ways: he has even had a stint raising black widows. At one point, Day Ham had 40 full-grown black widows and thousands of their babies; the original intention was to collect their silk.

“It was very time-consuming, since that [the silk] is very hard to collect,” Day Ham says. “I never really got around to selling it; it was more just interesting.”

Day Ham has even unintentionally fostered groups of animals; he once accidentally harbored wild mice at his house.

He recounts a time when he and his friend bought mice from a pet store on a whim. The two mice escaped from their shed and mated with wild mice and each other, starting a mouse colony in Day Ham’s backyard.

“We were told that we got two females, but of course, they were a female and a male,” Day Ham says.

Although these attempts at raising animals did not pan out, one of Day Ham’s other projects has proven quite successful.

A former student athlete, Day Ham quit varsity wrestling for an unusual reason: to focus on raising and breeding rex rabbits, planning to sell their fur and meat. With no after-school practice to attend, he spends around 40 minutes tending to them, ensuring they have enough roaming time, Timothy hay and Orchard grass.

The rabbits are housed in the backyard of a family friend’s house along Day Ham’s bike route home. In exchange for 10 hours of babysitting a month and taking care of the chickens, the family allows Day Ham to use their 300-square-foot backyard.

“If people were to come and see my farm, they’d see that these animals are being treated with respect.”

Day Ham hasn’t produced any rabbit products yet, but his business has already garnered backlash. He recognizes that some of his peers may question the humaneness of his practices, especially when they hear about it through the grapevine.

“I try not to spread the word too much, because when it travels by word of mouth it turns into, ‘Hey I know somebody who’s selling the brains of slaughtered rabbits,’” Day Ham says. “That doesn’t sound too good.”

Despite the rumors, Day Ham argues that his rabbit farm is much more humane than many other animal farms in the meat industry.

“It’s a place where rabbits are kept calm, and their health is checked,” Day Ham says of his farm. “The only way you can make a solid argument is if you’re vegan. But even then, a lot of people are vegan because they don’t like how the animals are being treated. I think if people were to come and see my farm, they’d see that these animals are being treated with respect, and are not stressed up to point of their death.”

Day Ham wanted to share his experiences, so he created a YouTube channel, CallumsCreatures, to educate others about animal care.

“With this whole internet thing, the world is open to those who are curious,” Day Ham says. “You have to learn from your mistakes and learn on the process.”

Despite his current passion for his animals, Day Ham doesn’t foresee maintaining his cockroach or rabbit farms after graduating high school. However, he is considering pursuing either a biology or zoology major in college. In fact, Day Ham has already taken steps to explore these fields of study by interning for the past three years at the Palo Alto Junior Museum and Zoo.

For now, however, Day Ham plans to maintain his thriving cockroach business and is expecting the birth of more rabbits in the coming weeks.

“It is very helpful to understand the ecosystem around you in order to act in a way that will preserve its beauty for future generations.”

“It is very helpful to understand the ecosystem around you in order to act in a way that will preserve its beauty for future generations,” Day Ham says.