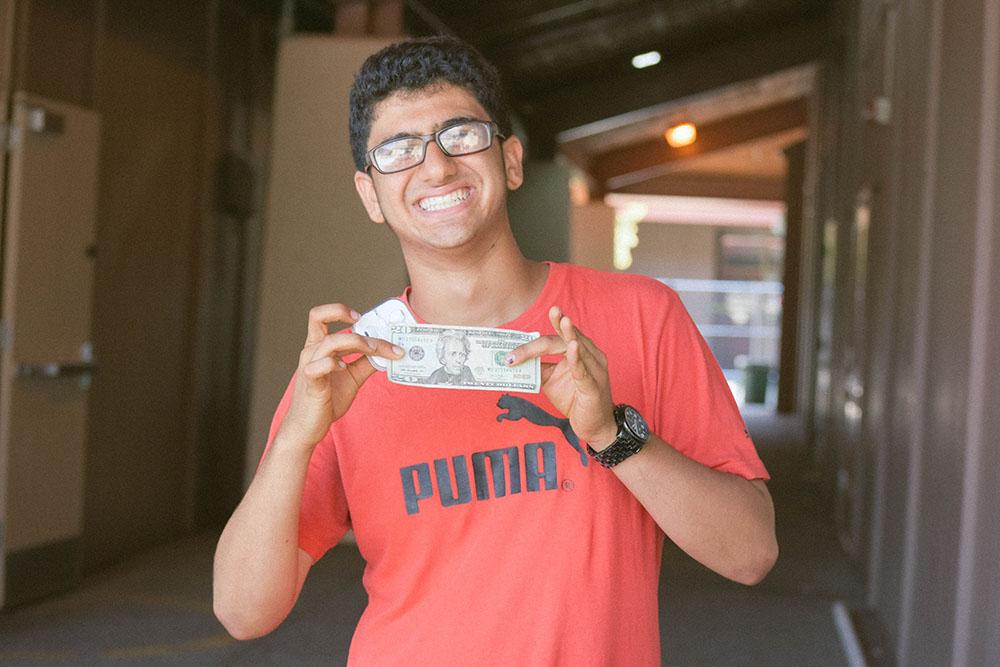 Business As Unusual: A Surprising Find Fuels A Booming Business

His warm smile broadening, Palo Alto High School senior Reza Navadeh approaches one of the many students lounging around in the Media Arts Center. In addition to seeing students, Navadeh, through his pair of shiny, black glasses, sees potential customers. Navadeh presents a freshly packaged pair of earbuds and delivers a concise sales pitch that has reeled in countless sales and satisfied numerous customers.

What has grown to be a well-known business on campus started with an unusual find.

The simple enjoyment Navadeh experienced from selling those computer monitors to his friends led him to expand not only the variety of products he sold but also the consumers he was selling to. Navadeh soon took to social media to market his headphones and computer accessories, each of which he sold for $5.

Since starting his sophomore year, Navadeh has gained a wealth of knowledge about his customers’ likes and dislikes through trial and error.

“At the beginning … I would buy a computer part that was $100 and expect someone would buy it,” Navadeh says. “It would sell, but just very slowly.  … It just feels uncomfortable when you put some money down to try and make money back and you’re not going to make it. It can feel like gambling sometimes.”

“At the beginning … I would buy a computer part that was $100 and expect someone would buy it. It would sell, but just very slowly.  … It just feels uncomfortable when you put some money down to try and make money back and you’re not going to make it. It can feel like gambling sometimes.”

Not only has Navadeh’s business been extremely profitable, bringing in up to $3,000 per school year, he says, but it has also allowed Navadeh to build a strong social network with a multitude of students of all grade levels who he normally would not have encountered.

The surprising find behind the dumpster provided inspiration for Navadeh’s future goals.

“I definitely didn’t see it [the business]going this far because I never knew it was a passion of mine until I found computer parts by the dumpster and sold them,” Navadeh says.

Identifying his passion for business led Navadeh to express his desire to major in business and finance in college. This summer, Navadeh worked with a financial advisor to gain experience working with real people and real money.

The experiences and advice Navadeh has accumulated throughout the years — especially the lessons he learned this past summer — inspired Navadeh to give back to his community through a seminar for his fellow Paly students about how to invest in stocks and save money for college. Unfortunately, no one showed up to the presentation.

Despite the positive experiences Navadeh’s business has given him in terms of entrepreneurship and people skills, he has also noticed that it projects a negative image of him to many students.

“The persona it has given me is not really something I like,” Navadeh says. “There’s been a lot of rumors about me — one is that I’m a drug dealer — I’m not a drug dealer. There’s even rumors that I steal my headphones or that I steal phones. And it’s honestly been really frustrating.”

Navadeh says the negative image can be attributed not only to the nature of his business, but also to his ethnicity.

“It [the business] really doesn’t give you a good persona, especially being Middle Eastern and you have that whole ‘bazaar negotiating vibe’ going on,” Navadeh says. “I would say that [the negative persona] is the only drawback.”

Having a future-forward mindset, Navadeh has big plans for his booming business, including a transition from a physical market to a digital one.

“I’m working on a website where people can buy headphones, chargers and fidget spinners all for $5 that are Paly green and have the Paly logo on it,” Navadeh says.

“I’m still trying to make sure I’m getting good quality headphones and good chargers,” Navadeh says. “I’m putting my own personal money into the website and to the first batch of chargers and headphones and stuff I buy. But the way I look at it, I’m not too worried about it because the money I’m putting into this project I’ve gotten from Paly students.”

Navadeh also hopes to use the skills he has acquired to inspire other high schoolers to develop their interests in business.

“In the future I see this being a club and hopefully handed down to Paly for other people like me that really enjoy business,” Navadeh says. “Maybe next semester if I want to make it a club and just see how it goes. That’ll be fun.”

Additionally, Navadeh encourages students to push past stigmas and pursue whatever passions they may have.

“Don’t let social norms hold you back,” Navadeh says. “Whatever you’re interested in, definitely put your mind to it and try new things.”