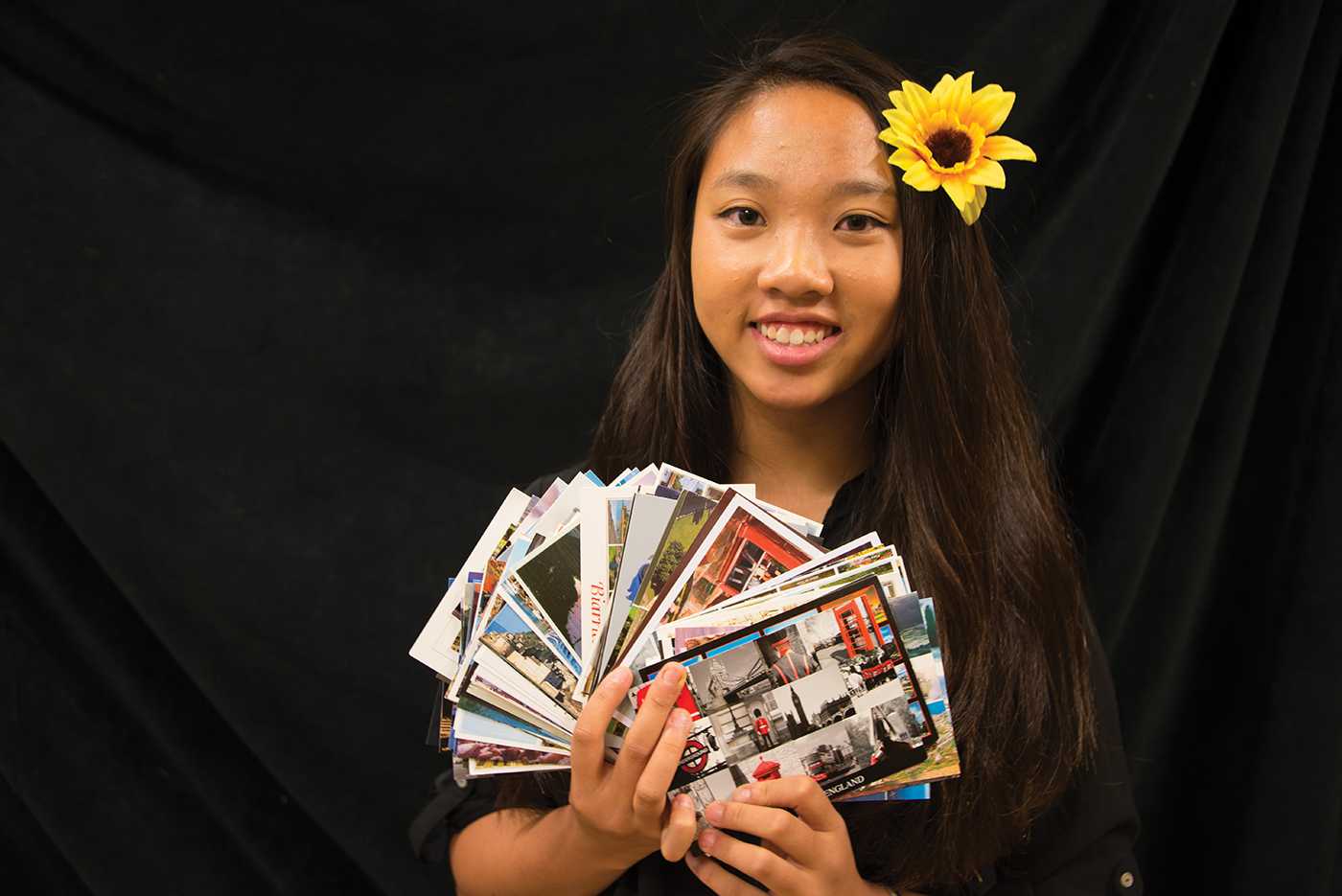 Bursting the Bubble: Students experience life outside of Palo Alto

Daniel Hald knew no Chinese before he left for China to study abroad for a year.

“It was a little bit of a disaster,” Hald, a senior at Palo Alto High School says. “For the majority of the year I could not understand anything they were talking about.”

Although the language barrier persisted, Hald’s immersion in a new culture led him to have new insights about Palo Alto.

“Growing up in Palo Alto you’re constantly told that you have all of these privileges of being born in such a wealthy area,” Hald says. “It’s one thing to be told that by other people and it’s another to actually sort of recognize it because you can say that over and over again and never really realize how unbelievably special that is.” 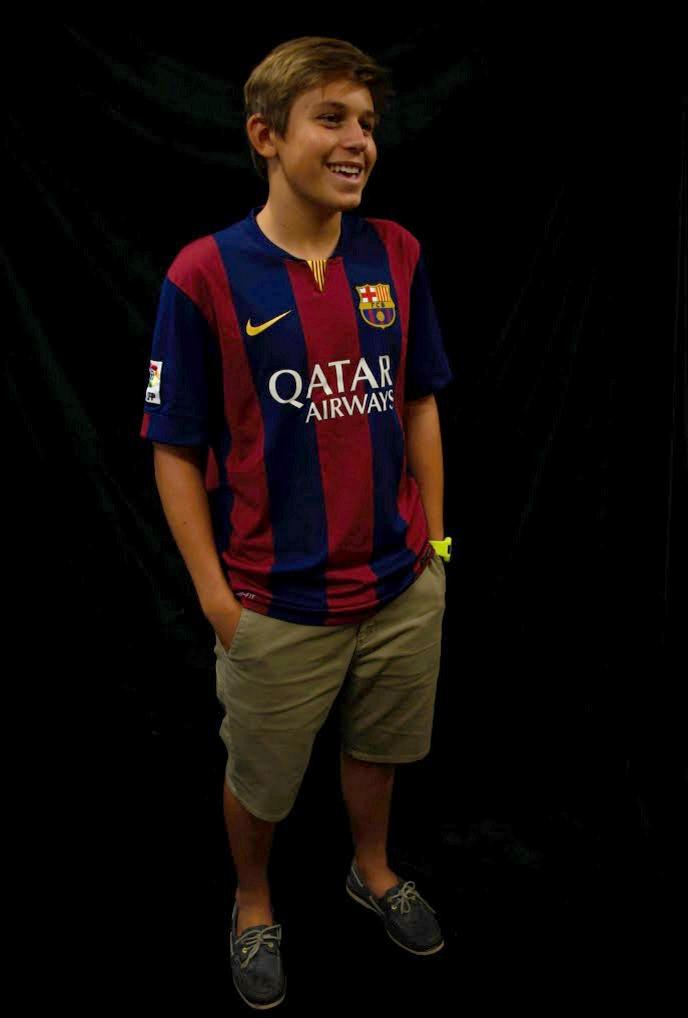 Peter Wisowaty sports his Barcelona shirt, a memento from his time in Spain

Hald is only one of the many Paly students that left the Bay Area during the last year. Over the summer and throughout the past year, these students were able to step back from the bubble of Palo Alto and redefine their identity as Palo Alto residents.
The events of the past year have led to residents grappling with the idea of what it means to be from Palo Alto. While New York Times articles have portrayed the spiraling stress and depression rates, and, on the whole, Palo Alto, in a negative light, Palo Altans struggle to come to grips with their feelings about their community. Students who burst the bubble of Palo Alto witness this identity struggle first hand and often return with newfound realizations about the city they have called home for most of their lives.

When Hald went abroad, he experienced new cultures and a wide variety of perspectives. According to Hald, even though Paly tries to provide students with exposure to opposing views, the diverse set of people and experiences within his study abroad program contributed to a more pluralistic view of the world.

“I think that even though Paly is very good at having these conversations and talking about both sides of an argument it still sort of becomes an echo chamber,” Hald says. “When I went to China and I got to talk to these people who came from completely different backgrounds, it helped me sort of change my views.” 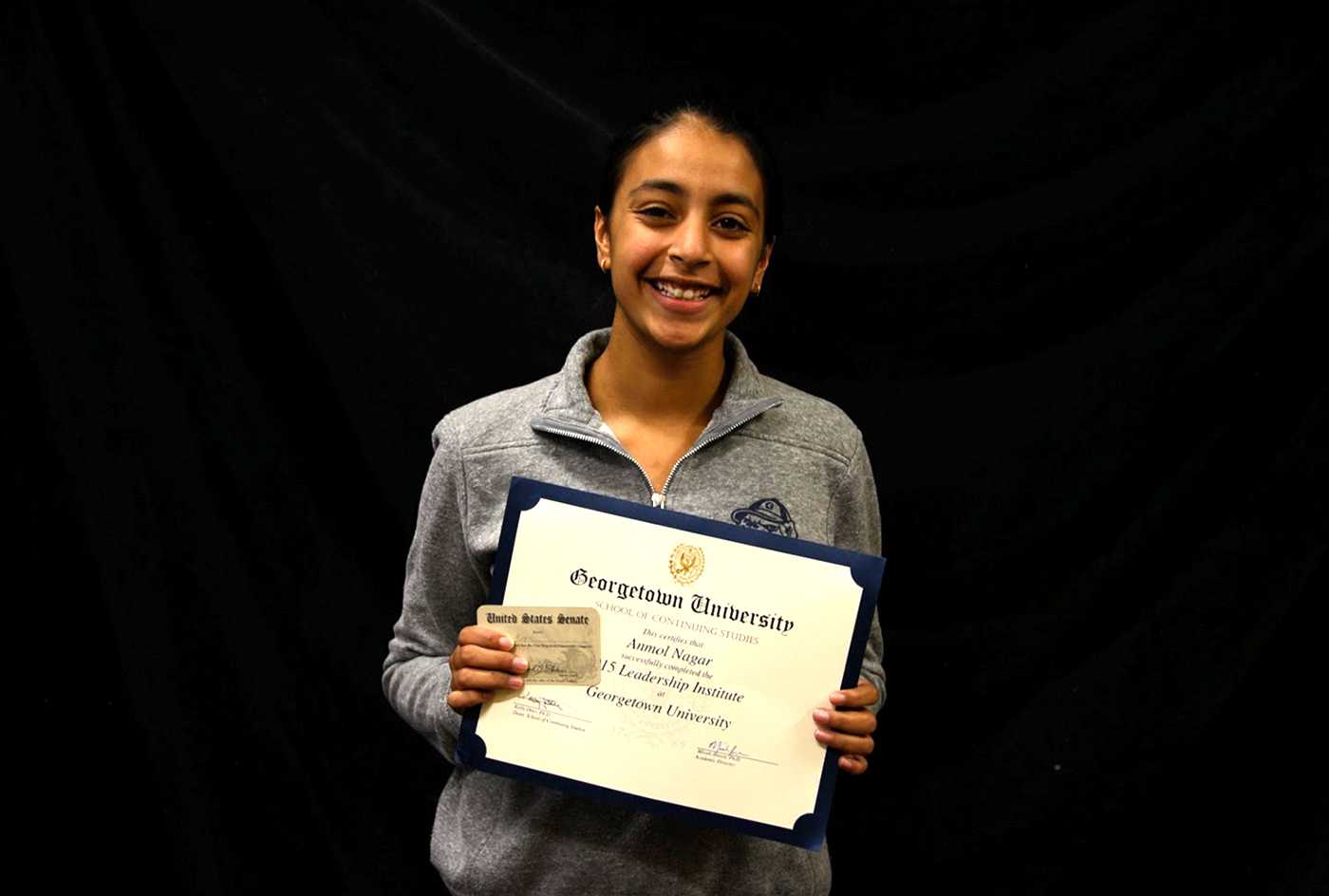 Anmol Nagar holds up her diploma from her Leadership Institute

Anmol Nagar, a junior who attended a leadership institute at Georgetown University in Washington D. C. over the summer, experienced the different views and political inclinations of students from different parts of the country. During the program, students split into groups to talk about world issues and potential solutions to those problems. When she suggested that the group focus on the problem of access to birth control and reproductive health services, and potentially talk about expanding access to Planned Parenthood, she was met with backlash from more conservative students.

“Another guy in the group basically responded with, ‘I don’t think we should present on that one because it goes against my and lots of people’s religious and political views,'” Nagar says. “And it was so different because, if I had said the same thing at Paly, it would have generally been positively received.”

In addition to the more diverse set of viewpoints that students experience, others, such as senior Brittany Nguyen, who studied abroad in France during her junior year, come back with a different view of Palo Alto culture.

“In France, they’re very detached,” Nguyen says. “There’s always a certain sense of formality in their conversations that I think Americans and also specifically Palo Altans discard, so there’s an informality and a closeness in Palo Alto community that doesn’t exist in France.”

For other students, their experiences help them appreciate what Palo Alto has to offer.

“We are so lucky to be able to live in such a prospering community with advanced technology and have everything we could ever want right at our fingertips,” says Joseph Kao, a Paly senior who went to Matagalpa, Nicaragua with a program called Global Glimpse last summer. “In a place like Matagalpa, there are people who can’t even go to school or afford a well furnished home. But I felt like they were some of the happiest people I’ve ever met.”

After being exposed to a variety of perspectives during the course of their programs, students such as senior Lana Graves who attended a musical theater intensive in Minnesota, often find difficulties in assimilating themselves back into the restricted Palo Altan mindset and culture.

“It’s definitely quite a shock when you come back and you hear people talking about their calculus tests,” Graves says. “When you’re with artsy people all day long, you don’t really get any of that. People aren’t really so focused on getting into the top colleges there. It’s all about focusing on art and creativity.”

For Peter Wisowaty, a junior who studied abroad in Spain last year, one of the most memorable parts of leaving Palo Alto was being exposed to new people. Through the study abroad program, Wisowaty met students from around the world and built many strong friendships.

“My best friend I’d say was from Iceland, but I also made friends from Switzerland, Japan, Finland, Denmark, France, the U.S.,” Wisowaty says. “There were so many cool countries, so diverse.”

Hald also discovered that his study abroad program allowed him to meet people from countries such as Russia and Turkey. 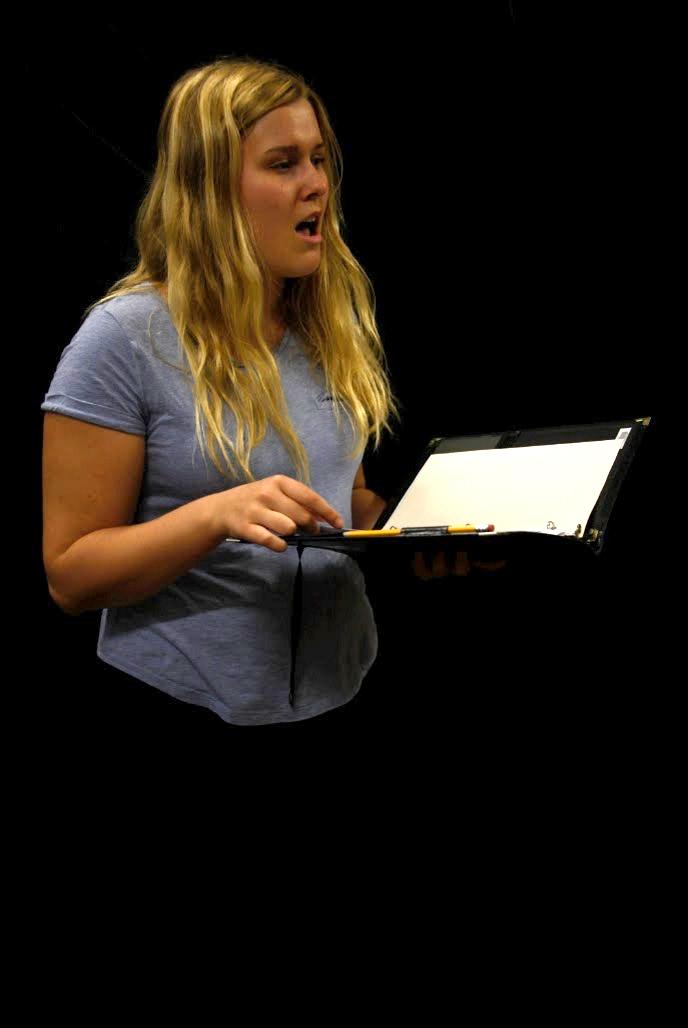 Lana Graves practices her music from her summer program.

“The majority of people that go to Paly have grown up in the U.S. and are all sort of on the same page,” Hald says. “Talking with the girl from Russia, we would joke about, ‘Oh, Russia hates America, and America hates Russia,’ but we were still good friends and it was cool to see both sides of the countries looking at the same issues.”

Graves, like Hald and Wisowaty, notes that the people completed her experience. Her teachers, coming from famous musical theater schools across the country, brought their unique guidance and expertise.

“You had people from all over the place and a lot of different perspectives on things and the teachers would disagree with each other a lot,” Graves says. “I don’t think I would have had nearly as good an experience if I was getting it from one school’s perspective because they are so different.”

Although Diaz Magaloni, like Graves, made friends during her time in Guatemala, the majority of the people that she met were patients in the medical clinics where she acted as a translator for doctors. At night, Diaz Magaloni was also able to bond with the Stanford students who were part of the program. When the poverty of the patients saddened her, Diaz Magaloni reached out to a number of students with the same sentiments.

“The first day I was there I was really depressed and this student and I were both crying and talking about it,” Diaz Magaloni says.

With a change in perspective about the world outside of Palo Alto, a myriad of new possibilities for the future open themselves to students. Although Graves had already settled on musical theater before attending her summer program, the experience painted a picture of her future and gave her a taste of what she could expect in pursuing musical theater in college.

“It was so different from any other community I’ve been with,” says Graves. “It was really inspirational. I’m absolutely positive that this is what I want to do now. I can totally picture it.”
For Nagar, although she remains unsure of her future path, the program cemented her interest in government.

“This program got me further interested in leadership and real life applications of learning about leadership,” says Nagar. “I definitely see myself in a career where I am able to use leadership skills to positively influence and guide people.”

For Diaz Magaloni, seeing the people that her mother spoke about inspired her to want to devote her life to making a difference in their lives. 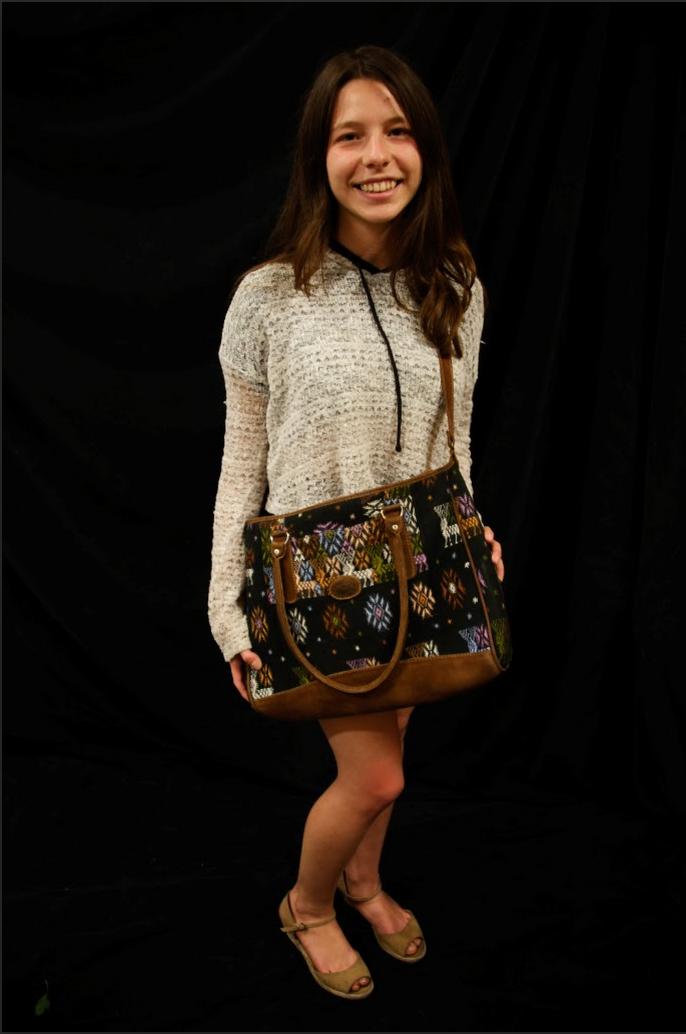 Emilia Diaz Magaloni shows off her bag, which she brought from Guatemala.

“I want to be one of those people that’s out there doing these things,” says Diaz
Magaloni. “You get a very personal connection to the people there and that’s also one of the things that keeps impulsing you to come back.”

According to Diaz Magaloni, leaving Palo Alto is essential to understanding the Palo Alto identity.

“Being from Palo Alto means we have a lot of resources … but at the same time sometimes we become overwhelmed,” says Diaz Magaloni. “I think the perfect remedy for that is breaking from a constant routine, it can be as simple as taking a bike ride or maybe going on trips like these and experiencing something completely new and different.”