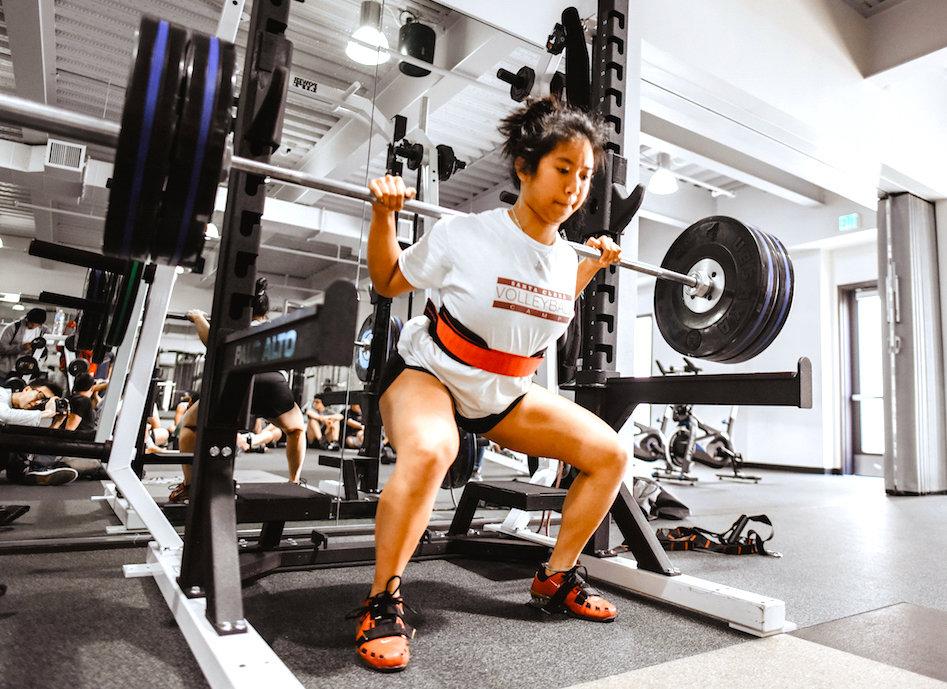 When Gabby Bernas transitions from one squat rack to another, or switches from the free weights to the bench press in the Palo Alto High School weight room, she does so with a tense, almost antsy sort of nervousness. But it’s not as if she doesn’t know how to properly load a barbell the same way seasoned athletes do, because she does. And it’s not as if her fingers aren’t adept at tuning and adjusting tricky fitness machinery to her 5-foot-4 frame, because they are. It’s just that there seems to be an awkward hyperawareness to her body, causing her to fidget and dart her eyes around her surroundings almost constantly as if she wants to yell out and confess, “I don’t belong here.”

For a competitive weightlifter, Bernas doesn’t spend much time at public gyms. She gets uncomfortable when people stare at her and says she wishes they would look away, but it’s admittedly difficult not to ogle in anticipation when she’s increasing the load on her bar 50 pounds at a time, thighs trembling to support and lift the hulking weights.

“I don’t like that people circle around me,” she says, letting out a bashful laugh. “I guess there aren’t that many people, but it makes me so uncomfortable.” 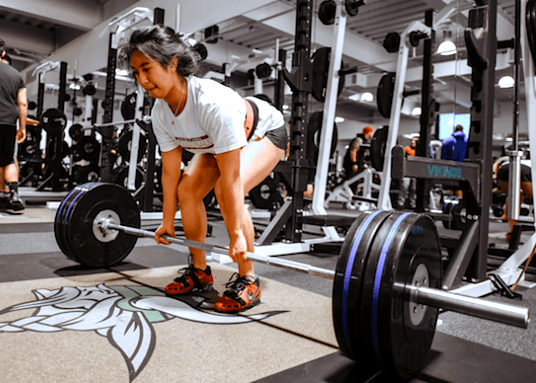 “After every single practice it was sharp pain and needles everywhere.”

Even with three years of lifting under her belt, two of which have been dedicated entirely to competitive training, she’s still not quite used to working out in front of others. Bernas likes the quiet, choosing to train in her own home’s garage-turned-gym with only her father for company. It is, after all, a method that’s propelled her to success, helping her place second in the nation pound-for-pound in the 2017 U.S. Strengthlifting Federation Fall Classic.

That’s clearly no small feat. But its significance is made even more obvious by her more-than-substantial lack of experience. Of the 319 lifters entered in the event, 95 had trained for more than 40 years. Bernas at the time had only lifted for two. And of the 109 female competitors, almost all were adults. Bernas, then at 16 years old, was the second youngest.

Even so, her performance certainly didn’t suffer. There she squatted 238, pressed 95 and deadlifted 302 pounds. Able to lift more than double her weight, “small but strong” is how Bernas likes to describe herself. She admits, however, that it’s taken her a while to think of herself this way.

Bernas’ lifting career began with a foot problem. She used to play volleyball, dedicating hours to the sport every day since sixth grade, but an injury to her arches shattered every possibility of continuing her passion through high school. It started with a slight soreness in the tops of her feet after a long day of practice her freshman year. From there, things got progressively worse.

“It was horrible,” she says. “After every single practice it was sharp pain and needles everywhere.”

Wanting to give her feet a rest from the brutal impact of running and jumping, Bernas looked to rowing, a more stationary recreation, to replace volleyball. But again, something wasn’t quite right, and there was something about crew that exacerbated her already unbearable injury.

“The pain got to the worst it ever was,” she says. In addition to intensifying, the sharp spikes of agony she had been stuck enduring on her feet began shooting up along her shins and calves. “I couldn’t even walk to my car after practice. There was so, so much pain.”

After less than a year of crew, Bernas quit and started seeing a doctor for the first time. They put her through an X-ray and MRI, revealing the presence of an extra bone in her foot that had been rubbing her tendons raw. The doctors couldn’t, however, offer her any concrete solutions.

“It was so frustrating because no one would give me any answers,” she says.

While Bernas was still playing volleyball, her dad had bought her a squat rack. He read that strength training was critical in advancing muscle growth, and thought it would help improve her serves. So she gave weightlifting a try, and as days went by, it became ingrained as part of her everyday routine.

In the beginning, lifting to Bernas was more of a casual hobby with convenient, athleticism-improving benefits than a real commitment. But when she moved past both volleyball and crew, all the while continuing with her methodical lifting regimen, she says she realized for the first time that being in the gym didn’t aggravate her foot pains. In fact, lifting was the only physical activity that never had. 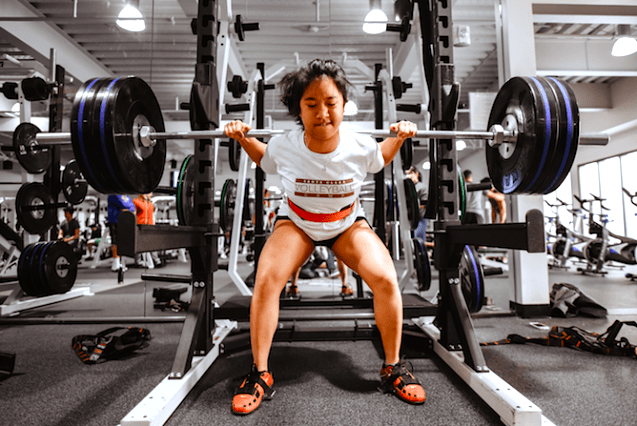 “I tried doing a pull-up, and I actually did it. Then I tried another, and I did that too. I don’t know what happened but it was amazing.”

“Lifting didn’t hurt my feet,” she says, eyes wide and beaming with excitement. “I didn’t even realize.”

Then she discovered she could enter weightlifting competitions, and she threw herself full-force into the sport. She wasn’t, however, prepared for how much of her lifting demanded.

Because although Bernas knew what it was like to commit herself to after-school sessions of volleyball or crew, lifting forced her to think past the training. For the first time, sport was no longer separate from the rest of her life. Instead, everything from diet and sleep to homework and extracurriculars started to orient themselves around lifting. She saw every single day as a cog in a well-oiled system aimed at increasing the weight on her bar.

“My whole life revolves around it,” she says. But with so much of her focus on lifting, other aspects of her life slip. Going out to eat with her friends, for example, is exasperating when they order sugary, calorie-heavy drinks while she’s stuck sipping water for an upcoming competition. “It sucks, but if I mess up one area, it messes up my entire training.”

Being this devoted also makes failure an infinitely more unbearable affair. At a competition in Spring 2017, Bernas overestimated the weight she could lift and failed every category. She couldn’t bend her knees all the way down for the squat, she couldn’t fully extend her arms for the overhead press and she was so discouraged by these two failures that she couldn’t even complete the deadlift that was set at a weight she’s comfortable warming up with. She left in tears before the competition even ended.

“I cried all the whole ride home,” she says. “I couldn’t stop thinking about it. I was frustrated and so embarrassed.”

The next day, Bernas went straight back to training with a renewed vigor, her determination fueled by the bitter tang of disappointment. Referencing online research on lifting techniques, she completely redesigned her training regimen, rearranging her days to alternate between pure lifting and other types of conditioning, such as yoga and sprints.

Introducing a more rigorous structure to her training, as well as a bit more variety, proved effective for Bernas. In addition to seeing her progress climb at a much steadier pace than before, she’s consistently lifted a personal best at every competition she’s been to since then.

Technical improvement doesn’t, however, mean she gets any less emotional during setbacks. And setbacks are more than common when she’s practicing for hours on end with no coach or team to rely on for support.

“When I can’t lift the bar I get mad and blame other people,” Bernas says. After staying up late one night to finish homework, she didn’t have enough energy the next day to finish her workout. Her dad, being with her in the room that day, took the full brunt of her anger. “My legs were shaking and my back was hurting and he was just there, so I started screaming and yelling at him.”

But it’s not all just frustration and anger — there’s also the good side of emotional. Noticing little signs of improvement, she says, is one of the best things about lifting. 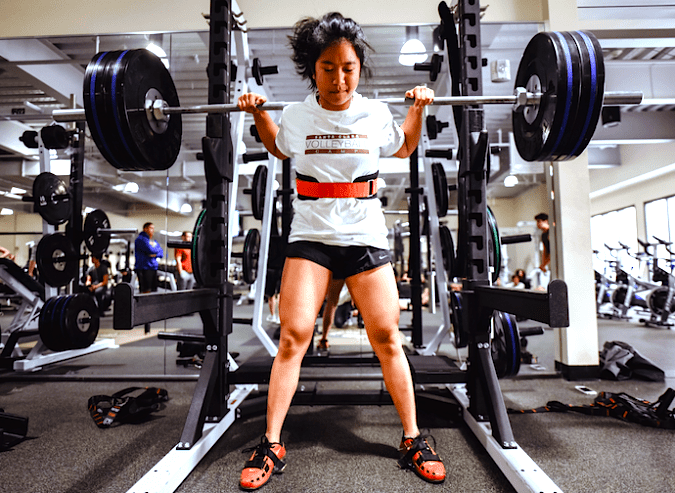 “I like proving people wrong. It gives me confidence about who I am.”

“I had a goal to do just one pull-up. Just one,” she says, referring to the beginning of her lifting career when completing even a single pull-up was an impossible task. One year into her training, she tried again with some unexpected results. “I tried doing a pull-up, and I actually did it. Then I tried another, and I did that too. I don’t know what happened but it was amazing.”

Confidence is a big deal to Bernas. As a girl of a less-than-imposing size, she says she’s always struggled with people taking her seriously. But while she may not look particularly self-assured when she’s sitting discreetly in class or walking timidly around the gym, there’s no mistaking the absolute certainty that rolls off of her when she picks up a barbell loaded with stacks of weight plates and manipulates it with startling ease. She looks utterly comfortable in those moments, a striking contrast against her usual demeanor.

“I like proving people wrong,” she says. “It gives me confidence about who I am.”

And this confidence is something Bernas wants to share with others. She’s been trying to get her friends into the sport, bringing them with her to the Paly weight room whenever there’s time after school.

Many of her friends have never lifted before. And when they do finally lift a bar for the first time — weights set at a fraction of the ones on Bernas’ — their eyes widen with incredulity as they realize the magnitude of a single pound and the sheer strength Bernas possesses that allows her to lift hundreds of them.

“It’s hard to explain how I do it,” Bernas says. She shrugs, and the smile that hasn’t ever fully left her lips, even as she reminisced about all the frustration and disappointment she’s faced to get to this point, disappears for a moment. “I just have to tell myself that I can.”