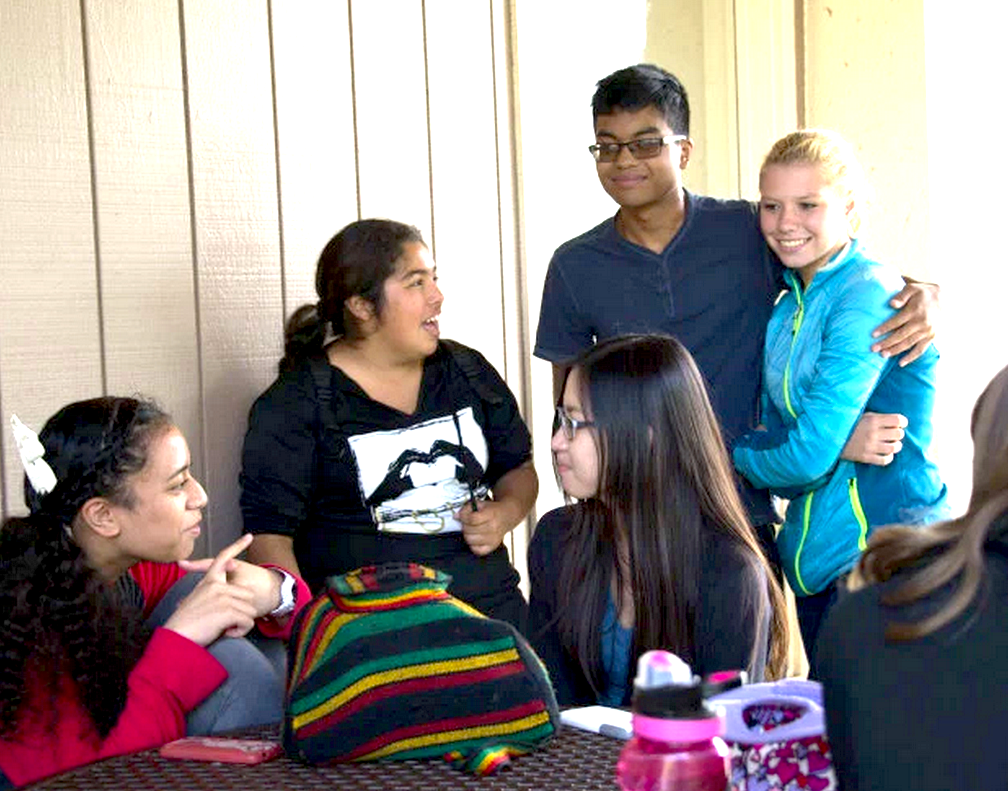 One year ago, the Western Association of Schools and Colleges published their report on Palo Alto High School. The report, which included an investigation of the achievement gap, found that the the disparity in academic success at Paly between races had not been improving as hoped.

Given the district’s minimal progress in reducing the gap highlighted in both reports, the PAUSD administration is focusing on the gap for the 2015-2016 school year by not only addressing economic disparities, but unconscious biases and racial self segregation as well.

LaPlace says black and Latino students who witness these biases often realize that people have lower expectations for them than their Caucasian or Asian peers.

LaPlace also acknowledges that self segregation is one of the many reasons for the achievement gap at Palo Alto High School.

“Pretty consistently we have a segment of our population who are underperforming,” LaPlace says about PAUSD schools. “What people like to call the achievement gap I really call an access and opportunity gap that leads to a significant gap in achievement.” 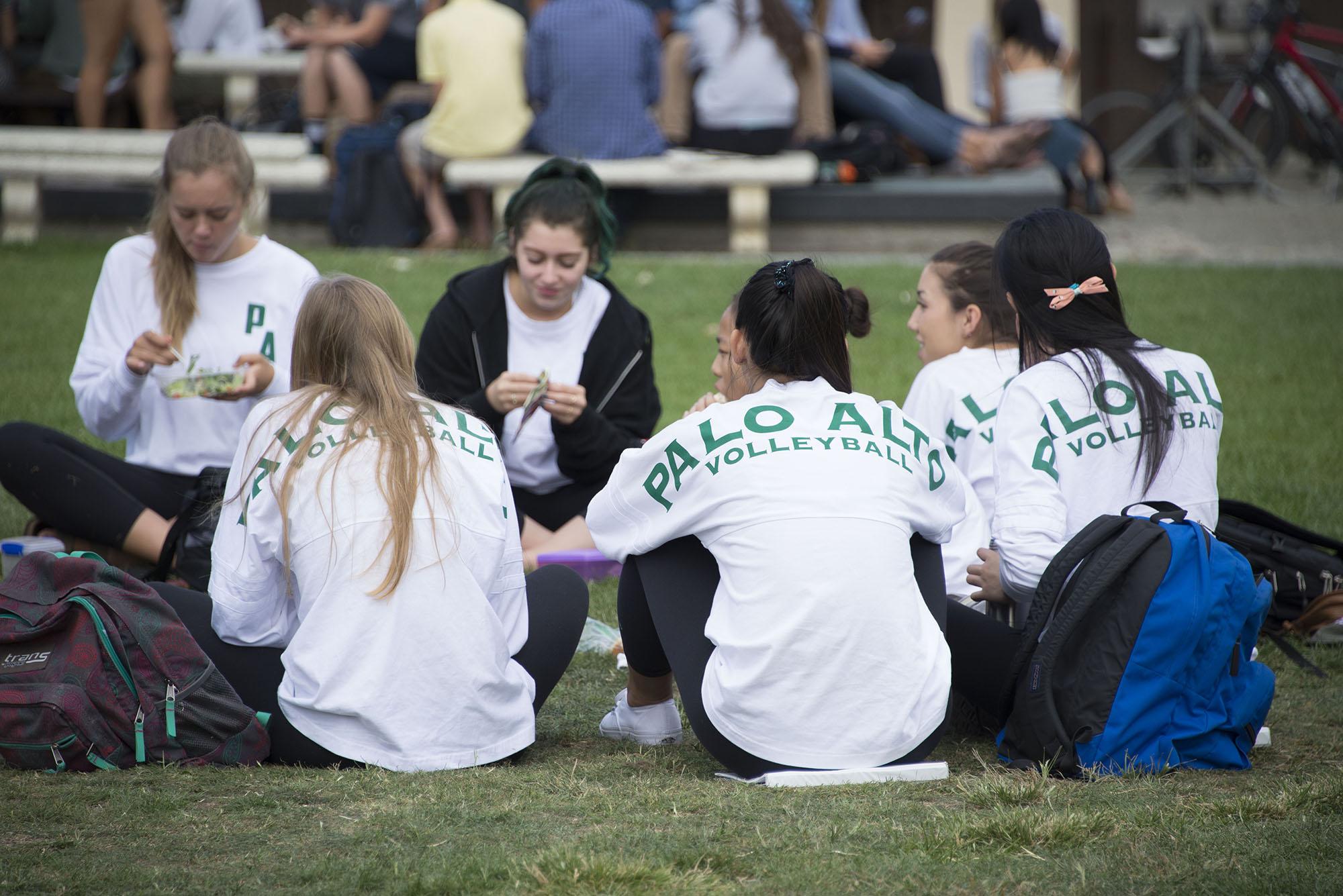 In a classroom, teachers often assume that black and Latino students need help with their work. This leads many students to feel that they are not held to equal standards as their peers based on their ethnicity.

Ladaisha Roberts, a sophomore at Paly, says that she has experienced differences in treatment relative to her non-minority peers. She says that in her classes where there have been special education students with aides, the aides focus on her more than the special ed students.

“They [the aides] treat me like I’m the special one and like I need extra help,” Roberts says.  “They will try to give me answers, but that’s not going to help me.”

The discouragement that some minority students perceive from their different treatment in classes may factor into the stark disparities in academic achievement statistics across ethnicities. According to Paly’s WASC Self-Study  in 2014-2015, only 6 percent of African-American students and 21 percent of Latino students were enrolled in at least one Advanced Placement course, compared to 60 percent of Asian students and almost 50 percent of white students.

Junior Nadia Leinhos, who was the only African-American student in her freshman and sophomore honors math and science classes, says lower expectations for minority students in Honors lanes contribute to academic disparities in Paly’s classes. Leinhos moved down a math lane her junior year because she felt like she didn’t get support.

“I moved down one lane and nobody batted an eye because of course you can move down a lane; you don’t have to keep trying,” Leihnos says. “Just go back to where it’s easier. That vibe that you aren’t expected to do as well is still there, and you can see that because most of the minority kids in our school are in the lower lanes in science and math.”

Advanced Via Individual Learning, a program offered to students at Paly, compromises part of Paly’s effort to improve its educational environment and bolster all students’ academic confidence. AVID facilitates minority achievement because it is an accessible source for college support.

“They [Students enrolled in AVID] could be choosing to have a prep,” says Elizabeth Mueller, coordinator and teacher of AVID. “They could be choosing to take art or foods or something else like that, but the AVID students are really focused on their academics. They have committed to that by choosing to be in AVID and being in it for all four years.”

AVID is essential for many students because it provides the resources and guidance to prepare them for higher education. Through supplying access to vital resources such as computers and teaching students a variety of study skills, the program strengthens struggling students’ self assurance in their intellectual abilities.

“At home they couldn’t really help me,” says Paly class of 2015 alumna Stephanie Estrada. “At Paly, they [the counselors] made me feel welcome, and they helped me because I took that step and was persistent. So they offer it [support], but not that many people go for it.”

Estrada believes that pride or the fear of being labeled “stupid” are often factors when black or Latino students in particular fail at finding guidance and support at Paly. The problem also arises because some students don’t know how to find the support they need. 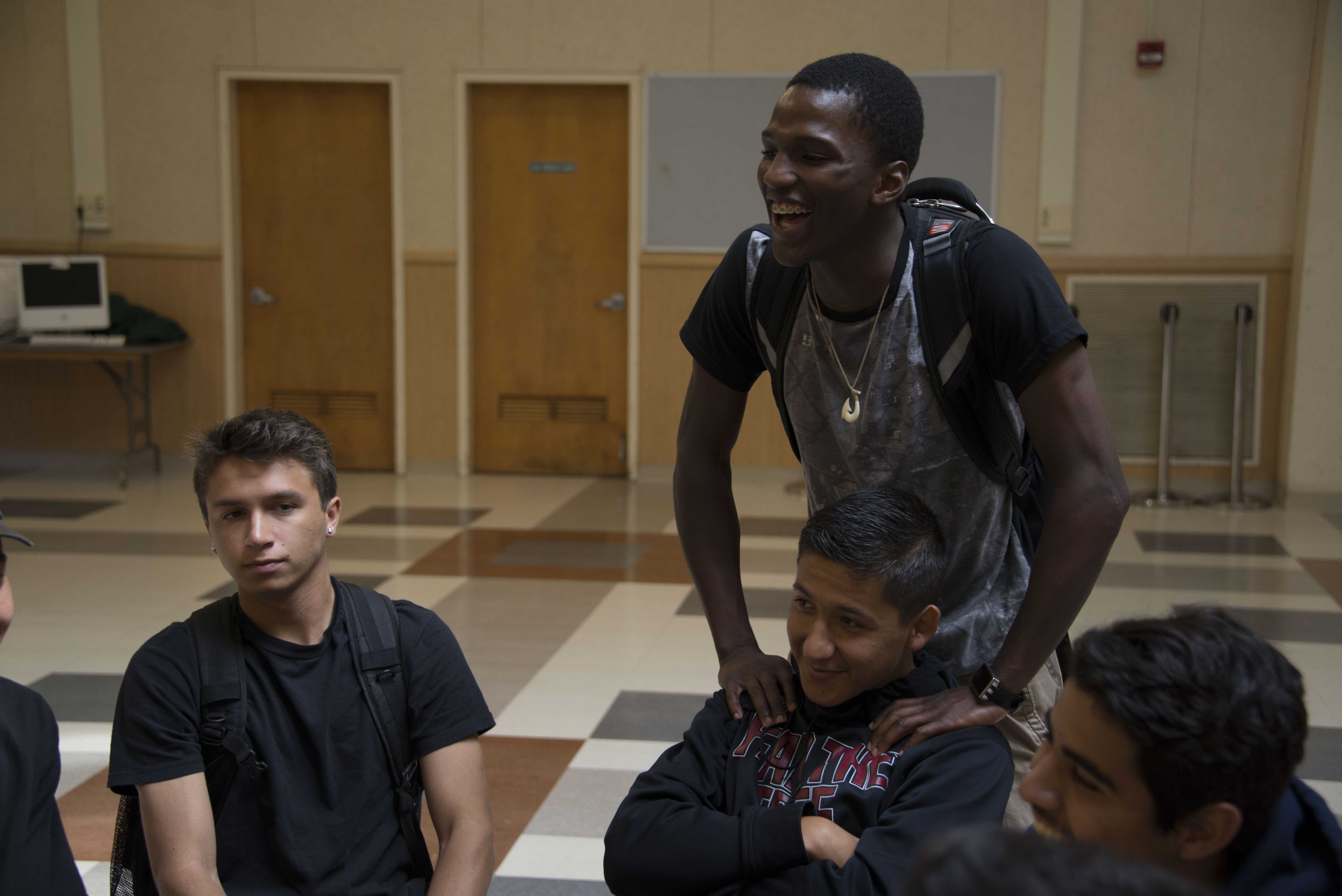 During lunch, many students segregate themselves by race and claim a section of the quad. For some students of color, finding people of a similar background allows them to feel a sense of belonging.

“They [students] share kind of a common background with students who are like them from neighborhoods of the same race,” says Stanford University Professor of Education Sean Reardon.

“They tend to segregate and some of it is that some kids just don’t feel welcome in other groups.”

Minority students living in EPA may experience a feeling of disconnection to their peers and to the Palo Alto community at large because they are not able to participate in the same opportunities and experiences as them.

“We don’t really affect Palo Alto,” says sophomore AVID student Brey Johnson. “We go to the high school and we get treated a certain way, but we don’t really have the effect on Palo Alto that a wealthy person would who has lived there their whole life. We just have a different outlook because of where we’re from.”

Because students surround themselves with people of similar backgrounds, they don’t experience diversity. Although many races and cultures are represented at Paly, self-segregation does not allow students to reap the benefits of the diversity at Paly.

“We are diverse, but the diverse sections of Paly don’t interact,” Leihnos says. “It’s like the one point in the Quad where all the minority students from East Palo Alto hang out and then there’s all the Asians in this one group and all the white kids on the senior deck. The East Palo Alto kids are seen from a distance and labeled as different and too different to be interacted with.”

“We don’t really affect Palo Alto. We just have a different outlook because of where we’re from.” Sophomore Brey Johnson

In the 2014-2015 school year, the district launched a committee to analyze the issues addressed in the WASC report. The result was the WASC self-study report published along with the Minority Achievement and Talent Development Advisory Committee’s report for the Board of Education. Some of the most prominent issues regarding the achievement gap included a lack of a diverse staff, unconscious biases against minority students, early education achievement gaps and laning.

“Diverse perspectives really enrich understanding,” McGee says. “They enhance creativity and help people learn and grow, so I think having the diversity is essential for the school.”

Starting in the 2015-2016 school year, McGee says that the hiring department will be evaluated on their ability to recruit a staff that mirrors the diversity of the student population.

In order to make the faculty even more accessible and supportive of all types of students, the Minority Achievement and Talent Development Advisory Committee formally announced their goal to  raise awareness in the PAUSD staff regarding unconscious biases and how they affect students. To meet this goal, PAUSD has developed training sessions for staff members devoted to awareness of unconscious biases and the role they play in the school system.

“Every teacher in this district will spend two days in unconscious bias training with two trainers,” says McGee. “I did the first one. We role played, we had in depth conversations, we did video analysis, we shared our stories … and that’s where it really starts is with dialogue.”

In addition to providing a supportive and diverse faculty, the administration hopes to reduce the achievement gap by offering more accessible early education. According to McGee, elementary schools will administer interventions for students in kindergarten through second grade to ensure that they are performing at an appropriate academic level.

“Early education is where you can really attack the achievement gap,” says PAUSD Tinsley Voluntary Transfer Program head Judy Argumedo. “A lot of our students in Palo Alto are so fortunate to go to great preschools and they come in with early skills and then somebody who maybe has not had preschool [is] trying to catch up.”

In addition to early education reform, the administration is attempting to adapt the laning system in PAUSD middle schools, so that students will have more flexibility in switching math lanes.

“[There will be] an extra math teacher in each of the middle schools, so kids can move up into lanes and have the support they need,” McGee says.

Although the administration’s progress in diminishing the achievement gap has been slow in the past, there are now two detailed plans in action to improve PAUSD.

“What’s great is we have a plan and this plan isn’t going to happen all of it this year, but we have twelve [goals] for this year and then hit [address] them all,” Argumedo says.

As reflected through the many reforms and future goals to reduce the achievement gap, PAUSD is trying its best to help students of all races succeed equally. According to McGee, the achievement gap is one of the district’s top priorities.