Bonnstetter On The Broadcast: Taking sports reporting to the Max 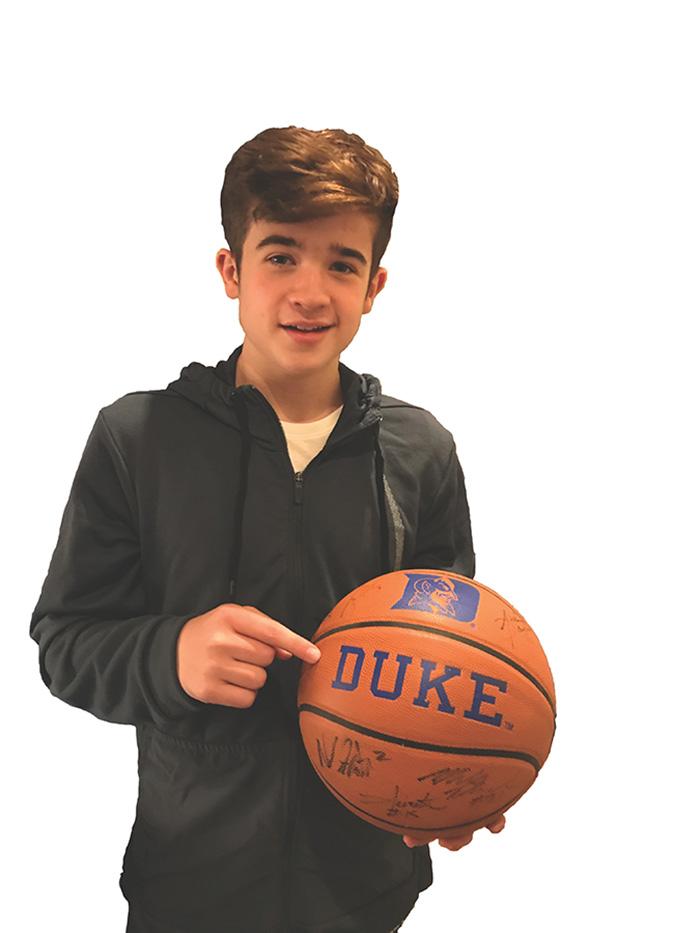 “I’ll never forget when I was back in the dressing room and I saw my name right next to Kobe Bryant’s name in the dressing rooms,” Max Bonnstetter says. “And they were like the same size rooms. For a second there, I was right next to Kobe Bryant, and I’m like wow, I can’t wait to meet Kobe Bryant. I turn around, someone taps me on the shoulder and Kobe goes ‘Hey what’s up dude,’ and I had to like start blinking, making sure I was seeing things right.”

A few minutes later, Palo Alto High School freshman Max Bonnstetter takes a deep breath and steps out past the blue curtains and onto the Tonight Show’s stage, where Jimmy Fallon and Bryant are waiting to shake his hand. He takes his seat on the blue couch next to Bryant, one of his lifelong idols.

While around Paly, Bonnstetter is usually recognized as a sports reporter on InFocus. What most people do not know is that he is a successful reporter for Sports Illustrated and the Junior NBA, who even appeared on The Tonight Show with Jimmy Fallon.

“I was like wow, that seems really cool. Maybe I could do that,” Bonnstetter says.

Inspired, Bonnstetter began looking for a memorable story and found one in a local high school basketball coach named Bob Hurley. At the time, Hurley had been coaching a team in an under-resourced neighborhood in Jersey City for 49 years.

“He was not only pushing them to be the best basketball players they could be, but also …  as good students,” Bonnstetter says. “He actually had a study hall for them before basketball practice just so they could get their grades up and work on their homework.”

With a story and a vision, Bonnstetter got to work.  He interviewed the team and Hurley, attended  games and wrote his story on Hurley’s life-changing impact on the players. After submitting, he sat back and waited for a response, which he was told would come in October.

October came and went without a response and November passed in the same way. By mid-December, Bonnstetter was convinced he had not won the competition. Then, one day in February, he received an email. Bonnstetter was officially a Junior Reporter.

His reporting career began with college basketball. Bonnstetter would attend games and then interview coaches and players afterward in press conferences or locker rooms.

Traveling from city to city, game to game, especially during March Madness, when the games are the most important and publicized, Bonnstetter soon garnered a reputation of asking unique, thoughtful questions.

His big break came during March Madness in 2017, after the underdogs South Carolina University beat Baylor University to move on to the Elite Eight. In an after-game press conference with South Carolina head coach Frank Martin, Bonnstetter asked: “when you coach or teach your team defense, what’s more important, technique or attitude?”

Bonnstetter had researched South Carolina and had noticed a trend of opposing teams consistently scoring fewer points against them than the team’s normal average, and he discovered that it was their defense that had carried them so far in the tournament.

Martin was impressed and Bonnstetter recalls him saying “that’s a heck of a question.” At a later press conference, Martin even asked where Bonnstetter was in an attempt to get better questions.

The video quickly went viral, amassing over a million views on Facebook, and Bonnstetter’s career took off. Soon, Bonnstetter was on Sports Center and various other radio shows. After only one year as a reporter, he received a call from The Tonight Show’s producers inviting him onto the show.

“I think the best thing that I’ve ever done has to be being on The Tonight Show with Jimmy Fallon and Kobe Bryant,” Bonnstetter says. “I don’t know how I wasn’t nervous but I think I was just prepared so it was the most fun and incredible thing.”

“The best thing that I’ve ever done has to be being on The Tonight Show.”

On The Tonight Show, he interviewed Kobe Bryant with Jimmy Fallon, asking Bryant questions like “what was it like having such a giant paycheck at such a young age?” and “who’s the next Kobe Bryant” It was after this that Bonstetter became verified on Twitter and Instagram.

Although Bonnstetter reports mostly on basketball, he has also reported on other sports such as football, baseball and golf.

“Without a doubt, basketball is my favorite sport,” Bonnstetter says. “I love playing it, reporting on it — everything about it, I just love.”

He also plays golf and reports on golf tournaments with his grandfather, who lives in New Jersey.

“He’s a lot better at noticing golf players than I am because he’s a huge golf fan,” Bonnstetter says. “So my grandpa would point out the players and I would turn around, run over, get a quick interview. I love covering golf with my grandpa.”

Recently, Bonnstetter has been covering the Warriors in the NBA preseason and regular season as a member of the Junior NBA. Before games and during half-time, he hypes up the crowd on the jumbotron. He plans to once again cover March Madness for Sports Illustrated in 2019.

In the meantime, Bonnstetter is one of InFocus’ newest sports reporters.

“InFocus is definitely good practice for me, especially if I’m taking a little break to focus on high school, but I’m going to be picking up things soon and InFocus has been great for me.”

Whether for InFocus or Sports Illustrated, Bonnstetter hopes to continue his reporting career.

“Covering all sports is so much fun,” Bonnstetter says, “so if I am able to do that when I’m older that’d be amazing.”