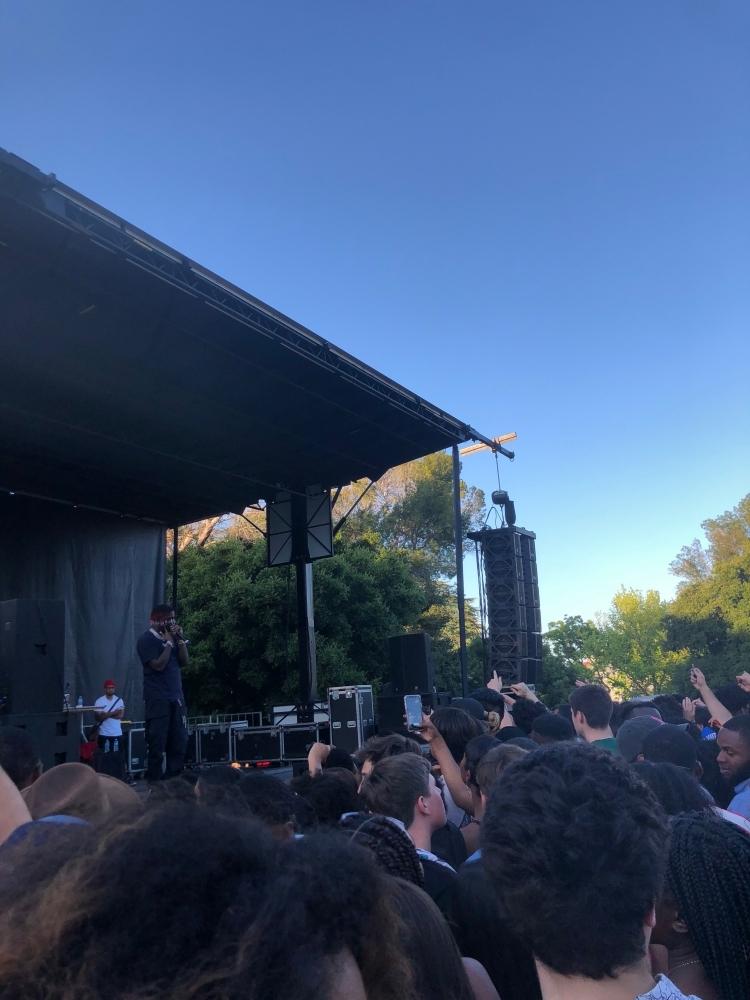 Weaving through the throng of people packed together on the large field, music blaring over the speakers, fueling the energetic crowd, it’s easy to understand why Blackfest gathers so much attention.

Every year, Levin Field on Stanford University’s campus transforms into Blackfest, a free of charge festival organized by the Black Family Gathering Committee.

Blackfest serves to put the spotlight on black artists and creators, both local and mainstream. From small booths selling locally made jewelry to Stanford students performing on stage alongside artists like Kendrick Lamar and Big Sean, the festival allows for a diverse, and often underrepresented, group of people to come together and showcase their talents.

Back to its roots

Although now famous in the Bay Area, Blackfest originally started out as a family picnic organized by the BFGC: only recently have they started to include live music, transforming into more of a festival.

Yet, Stanford student artist and Blackfest performer Gebreezy says that the event’s original community feel still remains for him.

“It does have that concert appeal, but I felt probably a little more of a sense of community despite that because in addition to it being just a big concert, a lot of black people come to Stanford’s campus,” Gebreezy says. “It’s a good compromise.

“It represents not only taking back space, but supporting our young artist.”

Kaly Jay, another Stanford student artist, remarks how the events concert-like atmosphere is a way for black artists to exhibit their music for a large audience, while also celebrating their heritage.

“For me personally, it represents not only taking back space, but supporting our young artists, and to me that’s celebrating our own, that’s showing that black lives matter,” Jay says. “They don’t just matter when we’re getting killed and dying, they matter also while we’re alive, and I think Blackfest contributes to that.”

Gebreezy also remarks how Blackfest’s transformation into a festival has brought in a diverse crowd, people from all over the bay coming to watch and audition for an opportunity to perform on stage.

Having done a couple smaller scale performances and only one on a stage as big as Blackfest’s, Gebre says performing at the festival is a really special opportunity.

“It’s surreal having all those people paying attention to you, giving you their time, vibing to your music, especially when you spent a lot of time on your stuff,” Gebreezy says.

Many Stanford students and local artists try out to perform at Blackfest, only three or four getting chosen every year.

Gebreezy and Jay both decided to audition for Blackfest for similar reasons: for the experience of performing in front of a crowd of people from all over the Bay, especially members of the black community.

The experience of a lifetime

“When you can bring [music festivals] to the community level and make it free, that’s amazing, you know, that’s accessibility right there,” Jay says. “Music is healing when it’s done right and I think Blackfest was a testament to that. You saw all those people there jamming out to the same music in unison, no drama, no hate.”

Blackfest is a prime example of accessible music bringing a community together.

“For me, I feel at home on stage and just being able to do what I love to do…just perform our music to folks who were hearing it for the first time…and they were rocking with us,” Jay says. “That was beautiful.”