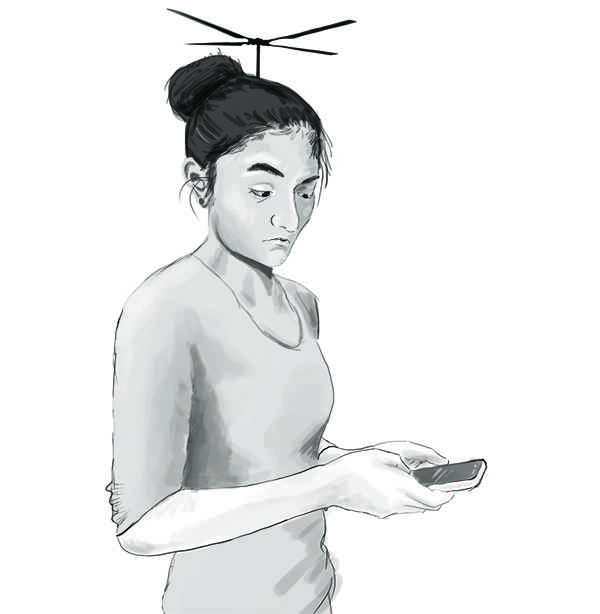 At the beginning of my sophomore year, I discovered that my parents had been reading my text messages. Although I knew it was out of care, finding out that my own parents had seen my messages I’d shared in confidence with my own friends devastated me. I was upset, uncomfortable and I vehemently insistent that what they did was wrong and unjustifiable. Unfortunately, this experience is not unique to me; many teenagers have experienced the same invasion of privacy by their own parents.

For as long as anyone can remember, parents have been on their kids’ backs, keeping an overly close eye on their activity. Especially in such a high-pressure environment like Palo Alto, many students feel a constant parental eye over their shoulder. Such a state of mind is unhealthy for teens, as it inhibits our comfort in speaking freely.

The most common method of supposed “spying” is fitting for the tech-dependent culture we now live in: parents reading their teenager’s interactions on social media — be it through Facebook, text messages or other forms of communication. This kind of strategy is ultimately efficient in the sense that it gives parents a sense of security in knowing their son’s or daughter’s every move. However, I can’t help but sympathize for the other teenagers who deal with this. No one wants for their privacy to be infringed upon.  Ask any teenager if they feel comfortable with their own parents looking over the messages they intend to share in a private discussion. I, for one, certainly don’t. The chances of any teen willingly accepting invasive behavior like this are less likely than Rand Paul endorsing the NSA.

The justification of many parents is typically one of two excuses — each argued by a different type of parent. Let’s say one parent claims something along the lines of, “Reading my kid’s texts is an infringement on their privacy, yes, but it’s only necessary!” A second parent, on the other hand, would likely say, “If my teen isn’t doing anything bad, why should they be worried about me reading their texts?” Teenagers are not necessarily “doing anything bad;” we just have issues that we prefer our parents don’t know about.

The claim that an invasion of privacy could be considered “necessary” is subject to wide debate.  However, if a parent is going to excuse their actions by claiming them as necessary, they had better have a very compelling reason. If there’s a shocking lack of trust in the relationship between parent and child, or a recent incident which sparked a parent’s worry, then it is quite justifiable for a parent to monitor their teenager’s social activity. After all, parental intervention can save teenagers from potentially dangerous or unhealthy situations such as drug and alcohol abuse.

While the parent claiming their actions as “necessary” may have an argument that holds true in special circumstances, the second parent’s feeble excuse is laughable.  It doesn’t matter if the teenager has anything to hide. Teenagers — or anyone, for that matter, send text messages under the belief that such conversations are private, not public. There are many teens who are not engaging in what parents deem “bad,” yet still have very personal, private things that they want to keep to themselves and their peers. I don’t want my parents knowing about my sexual activity, an issue I may have with a friend, or my angry thoughts after that bad fight I just got in with them and I’m fairly sure that I’m not alone in thinking that. Our parents don’t appreciate the NSA’s surveillance, so why should they make the same argument against us?

Although there are some rare benefits to parental surveillance, this kind of action should be used as a last resort. Instead of reacting to and controlling a teenager’s behavior by invading their privacy, parents should learn to step back and give their kid some breathing space.

As parental surveillance can give a child a sense of perpetual persecution, the victim’s sense of freedom to express their individuality may be inhibited. True, every teenager is going to mess up once in a while — that’s to be expected. But an overbearing, nosy authority figure can make anyone lose their sense of security and therefore individuality.