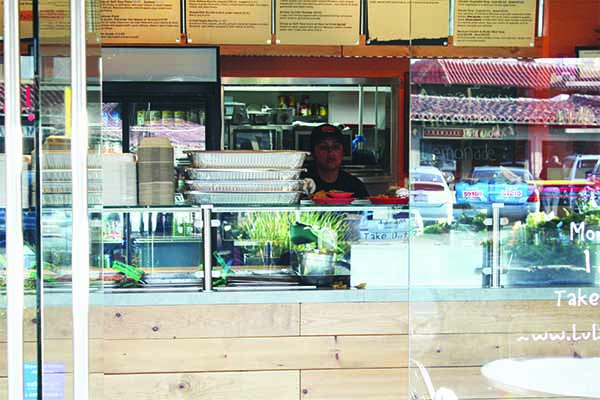 LULU’S: This taqueria at Town and Country Village lies across the street from Palo Alto High School and is a popular choice among students.

For many, California is well-known as the state with the best Mexican food. Palo Alto and its surrounding communities have more than their fair share of delicious comida north of the border. We are lucky to have an abundance of wonderful restaurants serving the excellent, Tex-Mex fast food known as a burrito. In fact, there are so many delicious burritos nearby, it is often hard to choose which one is the best. Luckily for you, Verde went out and found the five best local places to grab a burrito.

Karlitas Biting in, the first thing that caught my attention was the tortilla: it was much thinner than any other I had eaten before. I enjoyed this because it allowed the other flavors to take the stage. However, next I was hit with a strong onion flavor, which overwhelmed the burrito. Every other ingredient was perfectly proportioned and cooked, except the onions, which completely overpowered my palate. Rating: 7.5/10

Chipotle At Chipotle, the servers make your food as you watch, in a sort of “assembly line” process.  Depending on the worker who rolls your burrito, you may come upon a fat, thick burrito or a longer, thinner one. However, the quality always remains the same. Although its beans are quite normal tasting, Chipotle’s cilantro rice has a unique taste that adds a tang to the general flavor of the burrito. There are only a few selections of salsa, a fault that somewhat detracts from the otherwise wide range of ingredients. Although there was not a grand selection, each type of salsa was delicious and well-prepared. However, my favorite part of the experience came at the end of the burrito-making process. Although it costs an extra $1.50, Chipotle’s guacamole is some of the best I’ve ever come upon at a Mexican restaurant. It is creamy yet thick, while simultaneously packed with flavor. A Chipotle burrito is always excellent, but for me, the guacamole is the finishing touch on an already exceptional meal. Rating: 8/10

Lulu’s I got a barbacoa burrito with refried beans, cheese and Lulu’s orange rice, one of Lulu’s many available combinations presented by their Paly special, a discount reserved for only Palo Alto High School students. For $6.50, one may buy a burrito filled with beans, meat and rice of their choice. The barbacoa was incredibly juicy and satisfying. The rice was prepared perfectly in line with the heat of the other ingredients. Lulu’s has a wide selection of salsas, and one will likely find whatever they are looking for. However, the guacamole was far thinner than I hoped. On the whole, a Lulu’s burrito is not only delicious, but also one of the best deals for a student lunch at Town and Country Village. Rating: 9/10

Como Està Entering Como Esta Taqueria, the first thing you hear and see is the sizzling of the grill and the welcoming smile of the employee behind the counter. Having watched its assembly, I had high expectations for my burrito, but found that they had not taken full advantage of the girth of the tortilla and had gone a little light on the actual contents: meat, rice and beans. Still, the meat was juicy and in perfect proportion to the amount of rice and beans. The somewhat lacking contents were well-mixed; I wasn’t switching between one bite of rice and one bite of beans, but rather a perfect harmony of the two. I added pico de gallo to my burrito, enhancing its overall freshness. Rating: 8/10

Sancho’s Sancho’s is suitable for burrito lovers in both takeout and eat-in situations, as there is quieter seating in the back of the restaurant which allows for the take-out area to be relatively uncrowded. After a short wait, I was given a chicken burrito. My first bite was disappointing, as a mouthful of tortilla usually is, but as soon as I broke through this initial layer, the burrito redeemed itself. The juicy chicken was in no short supply; they evaded this fatal flaw of even the most outstanding restaurants. The next hurdle was the beans, and Sancho’s nailed it, striking a perfect balance between juicy but not dripping. Overall, this was an easy-to-eat burrito that left me full but still craving another. Rating: 9.5/10