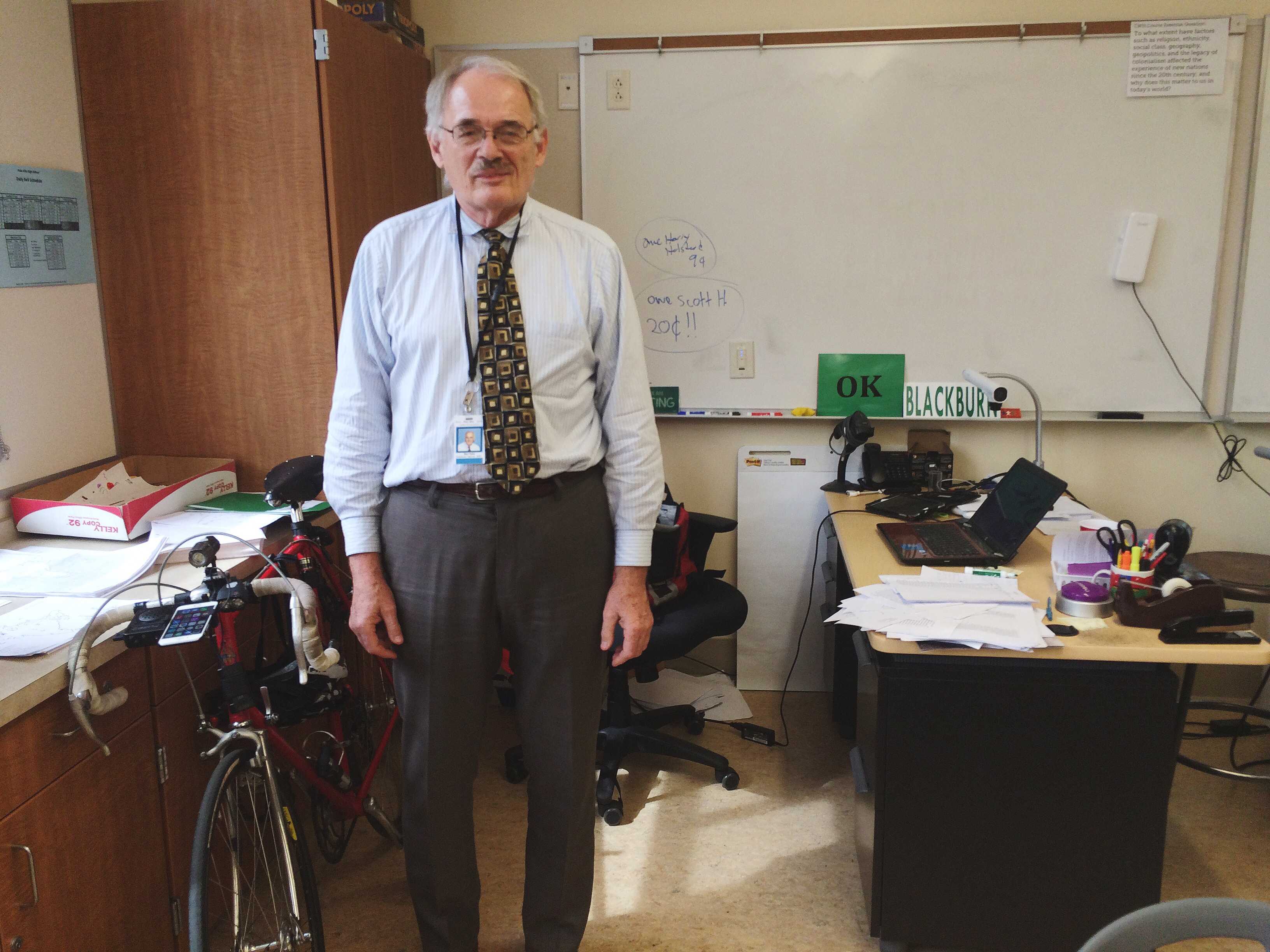 Benedek Tallai may teach in a different classroom each day, but he starts every class the same way. As he runs through a standardized Powerpoint presentation containing his expectations for students, his thick unmistakably Hungarian accent triumphs over his straightforward consequence system: a set of yellow and red cards. Despite the fact that students often see substitute teachers as the perfect opportunity to horse around, Tallai has only issued two red cards at Palo Alto High School in his entire teaching career, a testament to his ability to engage a class with his stories.

Sophomore Samarth Venkatasubramaniam characterizes him as old-fashioned, but with the ability to spice up lectures with anecdotes from his past experiences, and that is very much Tallai in his essence; his high-waisted linen pants, euro-stripe shirt and spotted tie hint at his eccentric-yet-old-school nature. Tallai doesn’t consider his job as a substitute teacher monotonous. Instead, he sees each day as an opportunity to share his stories and to refresh his knowledge.

Living Under a Communist Regime

Tallai remembers the day he came home from school to find that his father had disappeared. His family was based in Hungary at a time where revolution had boiled over the whole nation, only for the Soviet Red Army to regain control.

In the fall of 1956, Tallai and his family were living on a busy street in the suburbs of Budapest, an area that became infested with Soviet artillery keen on snapping up revolutionary snipers. This street served as the passage between the central area of Budapest and a bridge that was in Soviet possession at the time. Tallai had walked his dog on these very streets just a few months earlier, but after living in a war zone with revolutionary snipers fighting against Soviet artillery forces, Tallai’s family vacated to another side of town, sharing a small apartment with another family.

“Imagine living in a two-bedroom apartment with nine people,” Tallai says. “My father was sure the Russians would blow our house up.”

Tallai’s father was a revolutionary, working as a delivery man to get produce provided by the American government and other nations to the local markets. A neighbor who particularly despised him alerted the national ministry which worked closely with the Russian Soviet Secret Service (KGB), who at the time were arresting anybody who was deemed suspicious.

Tallai recalls the day the KGB agent arrived in search of his father.

“I was 10-years-old and a man paid us a visit and kicked the soccer ball with me in my garden, waiting for my father, and for some reason my father hadn’t come home from work for some reason,” Tallai says, reflecting on how benign the man seemed.

His father did not return home from work that day, vanishing on his own birthday without the slightest warning. An only child, Tallai felt the effects as his mother began working double shifts, trying to fill the hole his father had left.

Tallai and his mother visited the parliament multiple times asking for an explanation of his father’s absence, but each time they returned empty-handed.

Tallai’s father reappeared on Christmas Eve, over nine months later, without any apology or confirmation of his innocence from his captors. However, the impact of his father’s capture would live on in more than memory, for it was inscribed in Tallai’s student transcript. As a result, when it came time to apply to high school, Tallai’s application was not accepted.

“It was on my record,” Tallai says. “I couldn’t even get into a high school. My partner next to me had lower grades and everything. But he got in and I didn’t.”

His father later complained to the school district office, and Tallai was eventually admitted. The problem continued when applying for university, as he was denied his first choice university. Luckily for Tallai, a new university more suited to careers in the business world formed, and he enrolled in it.

A Career in Computers

Shortly after graduating from a business focused university in 1972, Tallai joined a technical university, which had one of the nation’s first computing departments. Taught by the very first teachers of the subject in Hungary, who themselves were educated in Frankfurt, Germany only the year before, Tallai discovered a path for a lifelong career in computer technology.

“My first binomial equation took 3.5 seconds to run after I punched it on the five channel paper tape,” Tallai says, before remarking that the modern generation probably has no idea what he is talking about. “Nowadays, if a video doesn’t load immediately, I am angry.”

Tallai worked a variety of jobs at many different companies before becoming a substitute teacher. His exposure to an abundance of companies in Hungary, Germany and England prompted him to put together a team of his own in the form of a British-Hungarian joint venture in computers and printers. The company began to work for the leading research institute in the country, developing imaging technology.

Tallai founded and built a successful business, but craved the market share that was available in the U.S., and accepted an invitation to cross the Pacific and build the company’s international presence. The position was initially considered a temporary one, however when it was time to return to Hungary, Tallai’s children had grown accustomed to the American life through growing up in the Bay Area and attending Monta Vista High School in Cupertino.

“My children were just like you guys; they had lived here most of their life and didn’t want to go back,” Tallai says.

After a lengthy spell in the industry, Tallai decided on changing his career, and a near-death car accident caused him to err on the side of caution and become a teacher.

Ben Tallai has perhaps seen it all: from walking his dog as a 10-year-old in a neighborhood infested with Russian snipers and revolutionaries, to taking the first computer class in Hungary. He has been a substitute teacher for over nine years and claims that after a long journey and a rich set of experiences, he “might possibly just have some knowledge to share.”

And he seemingly always does, living by a mantra which he uses to close each email: “Knowledge shared multiplies. Knowledge withheld stupefies.”

Tallai sees teaching as an opportunity to share his life story, through classroom presentations on the Communist Regime or Hungarian Revolution.

Tallai originally planned to acquire the credentials necessary to become a full-time teacher, but decided against it. 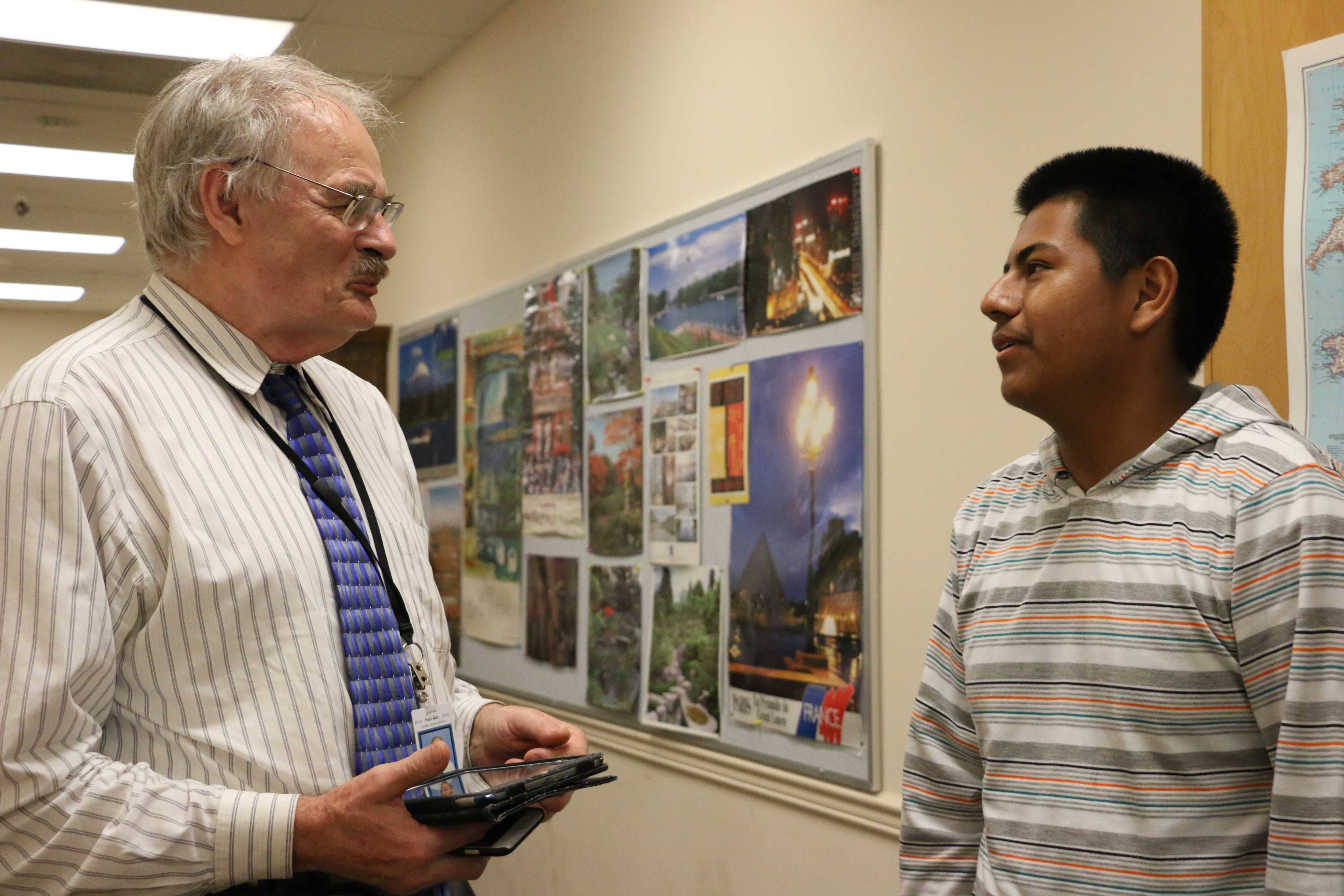 Tallai attempts to refine his Spanish skills while talking to a student during a class break.

Although Tallai enjoys substitute teaching, he is aware of the drawbacks.

“The one thing I really do regret is not being able to see the children grow up and blossom,” Tallai says.

However after teaching a summer school class in the Mountain View Los Altos School District in 2012, Tallai’s students inadvertently granted him his wish. After teaching a biology unit and sharing his thoughts on the environment, Tallai bumped into two of his students at the Baylands a few weeks later.

“I rode my bike on a Bayland path, a beauty reserve just minutes from our overcrowded Silicon Valley,” Tallai says. “I did not see a single soul for almost half an hour with the exemption of a nature photographer. Then after a turn, I saw two of my summer school students. I felt warmth in my heart. These two students brought their friendship in this magnificent scene, while thousands whizzed by in their cars on Interstate 101 without noticing nature’s amazing treasure literally a few feet away. I would like to think that I lighted the sparkle in these two students.”

An earlier version of this story was published with the following errors.There were no Russian snipers. The revolutionaries were not keen on blowing up the bridge in Tallai’s neighborhood. Additionally, Tallai’s family vacated in the fall of 1956. The story has since been updated to correct these errors.