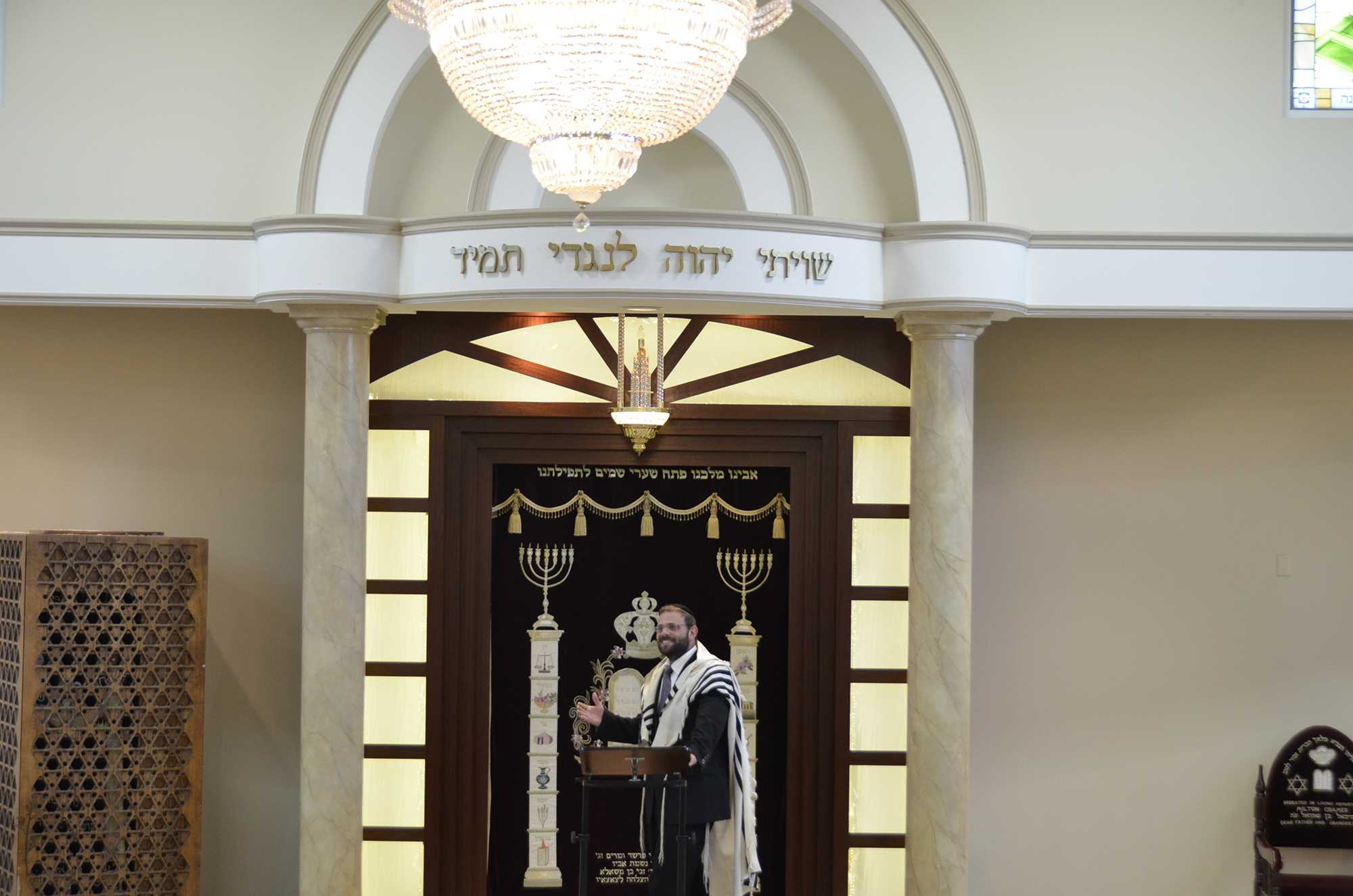 A sparkling chandelier hangs from the center of the ceiling, each crystals’ infinitesimal bits of color reflecting the stained glass behind. The light glittering from these crystals spirals down, past cream-colored walls and lace curtains, past women and men sitting in separate sections, all the way down to a man standing with a white and blue tallit, or Jewish prayer shawl, thrown over his Western-style suit. He speaks with confidence and power. His voice flows throughout the room, resonating in the minds of the worshippers.

Since he was seven, Rabbi Maimon knew what he wanted to be when he grew up — a rabbi, a Jewish scholar and teacher. According to Maimon, after many years of intense training, his dream has come true.

Maimon delivers sermons at an Orthodox synagogue in Sunnyvale, Bar Yohai Sephardic Minyan. In addition, he visits multiple schools around the Bay Area, including Palo Alto High School, with the mission of educating curious students about Judaism and bringing them closer to the Jewish experience. 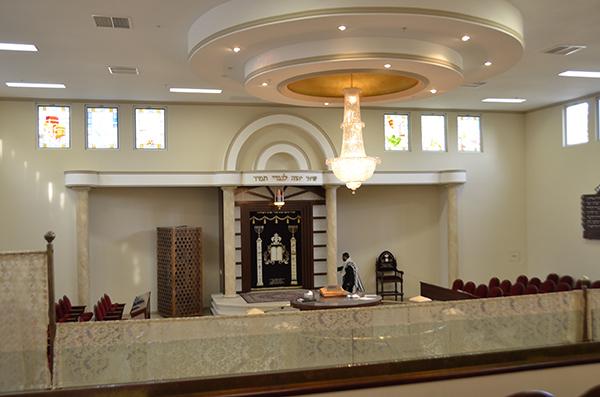 GETTING READY— Maimon puts on his tallit while walking through the Synagogue.

Every Tuesday during lunch Maimon visits Paly to spread his passion for teaching  Judaism to members of the Paly Jewish Student Union. Inside room 215, he stands in front of a diverse group of students, all united by their interest in Judaism. To many, Maimon is an inspiration.

His lessons bring a sense of insight to the club, according to Dalia van Zyll, junior and JSU vice president. “He doesn’t just focus on Judaism but religion as a whole,” van Zyll says. “He tries to tie it back into our own lives and teach us life lessons that we can take away from the club.”

When Maimon speaks, he often tells personal stories and strategically relates them to morals and lessons. He often includies memories from his childhood and his experiences growing up in Seattle and Israel. Other times, his lessons are centered around the everyday actions of those around him.

“He likes to be affected by what happens to him everyday,” says Alexander Gouyet, senior and former co-president of JSU. “One time he came to JSU and told us he decided to change the lesson plan because he wants us to appreciate the small things in life. For me, I was having a stressful day, but that club day really helped to calm me down.”

After his discussions, Maimon makes sure to integrate fun and engaging activities in his visits,    ranging from a matzah — Jewish cracker — eating contest to building menorahs — Hanukkah candle holders —  with graham crackers.

From Jerusalem to the Bay Area

According to Maimon, he was born into a family of rabbis. Through close support from his great-great uncle, he was taught the values of Judiasim from a young age.

Maimon spent his early childhood in Seattle, but his parents then decided to move to Israel to get a higher education. He attended a yeshiva, a school that primarily focuses on teaching the Jewish law. According to Maimon, at age 18, the principal kicked him out because he believed that leadership expereince would help him better reach  his full potential as a rabbi.

Maimon came to the Bay Area about five years ago because of the kind of people he wanted to teach.

“I was looking for a place…that was very intellectual, but had zero knowledge and background — people that don’t even know that they’re Jewish,” Maimon says.

He ended up at the Paly Jewish Student Union by chance when he heard that his friend had helped to start the club. Since he became involved in the beginning of this school year, Maimon has been working hard to improve the club with hopes to increase participation from about 100 members this year to at least 250 by next year. 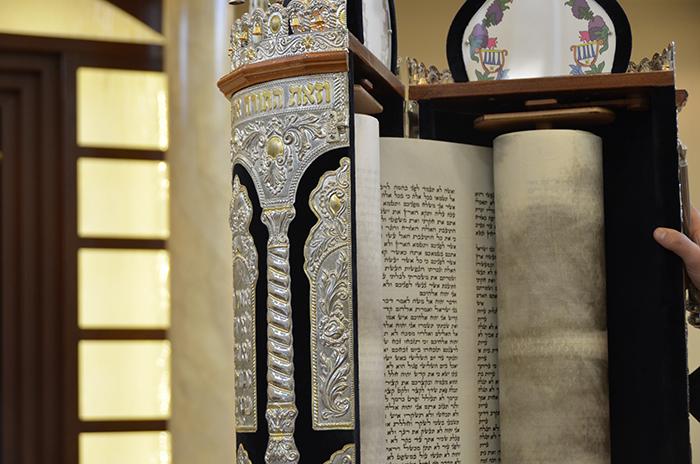 You shall know today, and then bring it to your heart that there is one God, and He is the one that gave us the Jewish law.

Rabbi Avraham Maimon credits these words, originally written in Hebrew, as the ones that erased his doubts about God’s existence and helped him rediscover God and ultimately strengthened his faith.

Even as one dedicating his life to God, Maimon has faced obstacles on his path to becoming a rabbi.

“To be totally honest, I had questions as a maturing adolescent about the religion,” Maimon says. “‘Is there a God? That was my main obstacle, re-evaluating the values I was brought up with.”

He tells the story of taking a year-long break from studying the Torah to explore his personal beliefs. Maimon then returned to his studies only when he was completely convinced about his faith.

Despite the inherently subjective nature of religion, JSU members say they feel comfortable arguing against the teachings of Maimon, which is in part due to his welcoming personality. Instead of pushing members to accept his way of thinking, he hopes for them to explore and find their own beliefs.

“He encourages people to play devil’s advocate and argue against what he believes,” van Zyll says. “He is very open about his own religious beliefs, while at the same time he is so accepting of everyone else.”

Maimon makes it clear that his intention in life is to educate people. He says that meeting over a hundred teenagers a week is not easy. However, he believes that the key to connection is to care for JSU members while letting them make choices of their own. 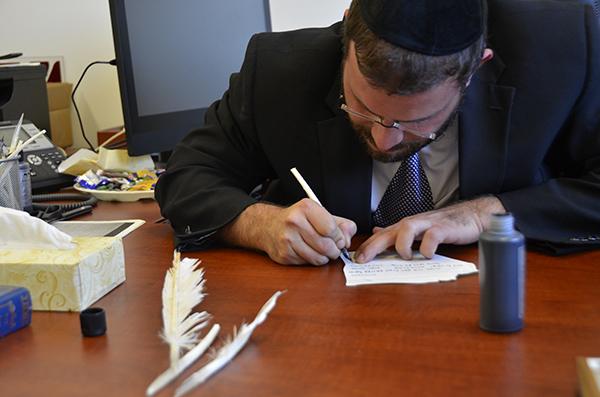 INSCRIPTION – Maimon sits in his office as he writes words in Hebrew on a sheet of leather.

When Maimon walks into JSU club every week, it is instantly filled with a rush of excitement. He says he is committed to sharing his beliefs at JSU because of his passion for educating others, specifically teenagers.

“I love the teenage stage because you guys are still kids, but you have the minds of adults,” Maimon says. “Teenagers are still exploring.”

Every day, Maimon says he feels he is continuing to fulfill his life-long dream by sharing and teaching his beliefs with those around him.

“I am a rabbi that is building and doing so many things,” Maimon says. “I want to open up an organization here, dealing with teenagers and giving them Jewish knowledge and Jewish experience. This is a life mission that I took upon myself when I was seven years old.”