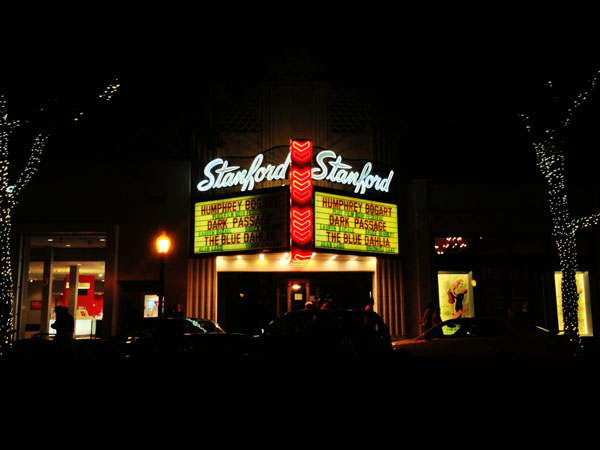 Back in Black and White

The tones of organ music in the Stanford Theater transport movie-goers back to the early days of film. In the darkness, it takes a minute to identify the organ player: dressed in a suit jacket with short tails, he sits on the stage, framed by red velvet curtains. The last song finishes with a flourish and applause ensues. The movie is scheduled to start at 7:30 p.m., and when the curtain rises, the analog clock icon on my iPhone tells me it’s right on time. No previews. No blaring announcements about cell phone use.

A downtown Palo Alto treasure, the Stanford Theater is one of the only theaters in the country “and probably the world” where an original Wurlitzer organ plays every night before and after the main film feature, manager Cindy Mortensen says. Part movie theater, part time machine and part movie poster collection, the Stanford Theater is a cultural embodiment of the golden age of Hollywood.

In the heart of downtown, it offers a diversion from the monotony of high-end restaurants, frozen yogurt stores and boutiques that are University Avenue’s typical options.

The year 2025 will mark the theater’s centennial anniversary. Even today, to walk through its doors is to step back into the Jazz Age, when it was Palo Alto’s premier movie house.

David Woodley Packard, son of HP co-founder David Packard, rented the theater out in 1987, upon Fred Astaire’s death, to hold a film festival in his honor. During the three-week festival, the theater showed almost every Fred Astaire film ever made; it was sold out every night.

Taking this as a good indication that people would come out to see classic films, Woodley Packard restored the theater — its dazzling marquee and intricate painting — to its 1925 glory. Following the restoration, Woodley Packard founded the Stanford Theater Foundation. As president, he runs the theater to this day.

“He [Woodley Packard] sees classic film as the greatest 20th century art form, and he feels that we all have a responsibility to preserve that art form, and to make sure that it survives and that people can see it in perpetuity,” Mortensen says. “In a way this theater functions as a museum — when you come in you kind of go back in time.”

The moment movie-goers step over the threshold, they are transported back half a century. The sounds from the bustling sidewalk outside die off, and the serenity of the lobby takes over. The smell of freshly buttered popcorn permeates as guests wait to buy tickets, guarded by a velvet rope.

“You can go anywhere else in the world and go see Tom Cruise or Ryan Gosling,” Mortensen says, “but you can’t just see [Humphrey] Bogart or Cary Grant. It’s a dying art form, and we keep it alive.”