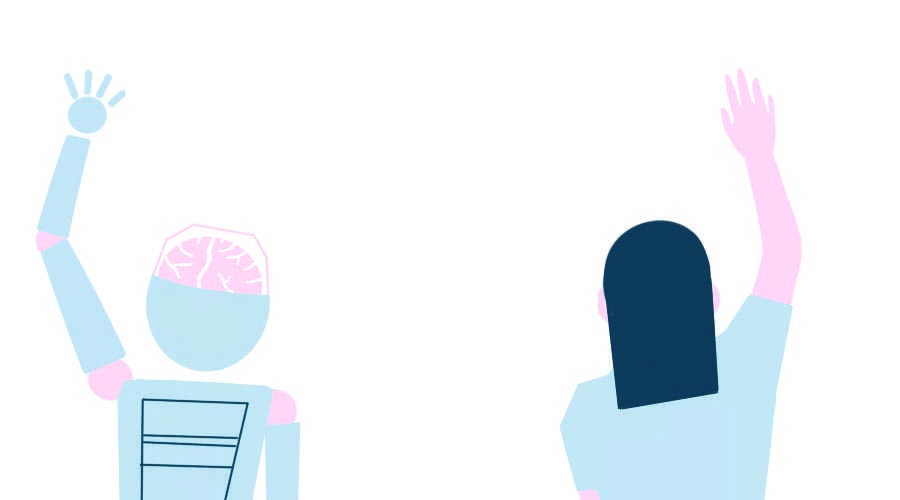 The Terminator: an eerily humanoid cyborg assassin sent to Earth to destroy human civilization. Hal 9000: the homicidal red computer from 2001: A Space Odyssey, hell-bent on sending astronauts into the depths of space. Westworld: an amusement park operated by android “hosts” who end up murdering their guests. Ava: the Machiavellian robot from Ex Machina that utilizes her intelligence to manipulate human affections, ultimately for personal gain.

Hollywood has produced a wealth of movies featuring omniscient, futuristic robots, the majority of which depict AI (artificial intelligence) as having a destructive agenda. If stripped of media-influenced misconceptions, however, today’s AI is composed of no more than lines and lines of code. Far from being a manipulative force, artificial intelligence is a computational device capable of executing tasks traditionally performed by humans, an apparatus with the potential to change the landscape of learning whether in the form of interactive robots or mere software downloaded on existing devices.  AI’s pivotal role in the classroom is a reality that many Palo Alto teachers and students may be the first to discover.

According to Martin Freed, the program director of the Artificial Intelligence Center at Stanford Research Institute International, academic success is not attributed only to traditionally desired qualities such as intellect and a strong work ethic. Curiosity and perceptiveness, Freed says, play just as large a role in learning, along with non-cognitive factors such as drive, personality and resilience. These elements have shaped SRI International’s education, research and technological creations.

“Mentors are the key to helping you through that much larger process [of learning], but not everybody has a mentor,” Freed says. “Technology is where you start to ask, ‘Is there a technological way of delivering the same experience or the same value that a mentor delivers, in a software which can be replicated as many times as you want?’”

H. Chad Lane, associate professor of educational psychology at the University of Illinois, says AI will be instrumental in promoting more individualized learning. If AI were to be implemented in the classroom as software downloaded onto existing devices, the issues of large classroom sizes and teachers’ limitations regarding specialized learning needs would be resolved by freeing teachers from the more repetitive aspects of teaching. Online services such as Khan Academy and Grammarly work towards actualizing his vision by tracking students’ progress through personalized videos and tests, offering hints and providing feedback based on that progress.

“We want your time spent valuably — this does not mean just giving answers; it means providing the student the help that’s needed at that moment,” Lane says. “That’s really what the current technology is capable of.”

From Lane’s perspective, AI would eliminate the need for expensive new hardware, assisting financially-challenged districts and closing the achievement gap. Freed, however, asserts that any changes made to realigning curriculum may constitute a section of hidden costs.

Regardless of the potential educational and economic impacts induced by AI, the reality is that it is still in its developmental stages. Although AI has the conceptual capacity to revolutionize education on a national scale, it currently lacks the potential to replace demand for jobs.

“Teachers are absolutely central and a lot of AI work focuses directly on their needs,” Lane says. “The idea that there’s any interest in replacing them [teachers] is way off base, it’s more about how we can improve them — they’re a limited resource.”

Esther Wojcicki, Paly journalism teacher and author of Moonshots in Education, a book that explores the future of digital education, echoes Lane’s sentiments. She adds that AI could mitigate the issues of the current schooling system, including staffing shortages.

“The state of Nevada — they were short a thousand teachers this year,” Wojcicki says. “And it’s only going to get worse; not a lot of people are going into education. You don’t get paid a lot; the average salary is about $45,000 a year. Here in Palo Alto, you couldn’t even live.”

Although much of the discussion surrounding AI in school settings remains speculative, the Palo Alto High School community has formed diverging opinions on its potential impact in the classroom.

Neil Kapoor, a freshman student who uses Khan Academy, an online service that delivers personalized feedback to students in all stages of learning, holds a positive outlook on the future of AI.

“Generally, technology has helped us, especially in education, more than it’s harmed us, so I think [AI] would also be cool to experiment with,” Kapoor says.

Senior Kenneth Cheung, captain of the Paly Robotics Team, believes that debating morals on this issue is useless, and that owing to mankind’s limitations, the development and future expansion of AI is inevitable.

“I think it’s going to happen anyway, no matter what, and not just in education but in everything else too,” Cheung says. “So I guess you can debate whether it takes away people’s jobs or whatever, but I think computers have the potential to do better. It’s just a matter of when.”

Exploring a different facet of AI’s future influence and role in society, Paly Escape Literature teacher Erin Angell toys with ideas of technology surpassing mankind through her instruction of Philip K. Dick’s novel Do Androids Dream of Electric Sheep, and approaches AI with a “healthy skepticism” regarding potential implementation in the classroom setting.

“I think it [AI] has the capacity to be really helpful but that depends on its design — whether the user is designed into the interface or whether it’s designed to replace the user,” Angell says.

Angell acknowledged the importance of face-to-face interactions between teachers and students, which facilitate the improvement of interpersonal skills. Communication and conversation, Angell says, are central to learning.

“I think that human interaction is important for learning, which is one of the reasons that I don’t think AI is going to be something that replaces a teacher,” Angell says. “I think that we are already seeing technology impeding our ability to communicate, but again it just depends on how you design the interface.”

“There’s a baseline of literacy that one must have with digital technology so that they aren’t completely out of the loop,” Angell says. “So people in socio-economically disadvantaged districts or school environment will be behind [without equal access to AI technologies].”

Dr. Max McGee, superintendent of PAUSD, reiterates Angell’s sentiment of the importance of increased access to technology and AI in schools.

“You’re successful if you have as much curiosity and creativity as seniors as you did in kindergarten,” McGee says. “I think artificial intelligence really can help not just ignite it but sustain it … and create connections that are now almost impossible to make unless through individual relations.”

His 45-year teaching career has taught McGee that although certain changes have been enacted in the America’s schooling system, the fundamental concepts remain.

“One of the major changes that have transpired in regular classrooms are now we have better projectors; we have computers; we havew smartboards,” McGee says. “But by and large, the structure is still the same. We still have one teacher for 25 to 35 kids.”

Education needs reforming, and McGee says that AI is just what the system needs to improve in leaps and bounds. Monetary concerns, he says, won’t prove to be large roadblocks to making AI available to more districts, and AI would become less cost-prohibitive as the technology advances.

“I think we need to be a lighthouse district,” says McGee. ‘I think with our human and financial resources, frankly we have a responsibility to be on the frontier and to help school districts realize some possibilities to help them grow.”