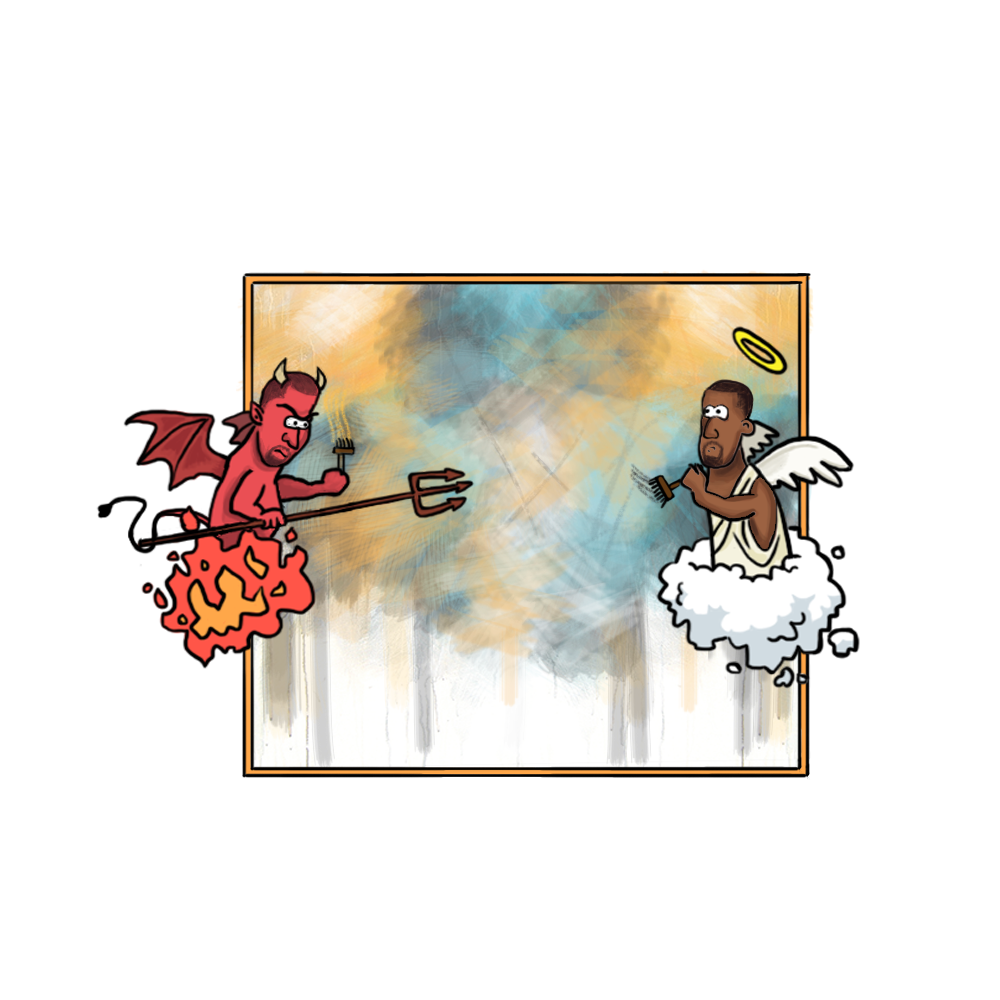 Art from the Artist: Proye vs Conye

PROYE: We need to separate art and artists and enjoy art freely

For many people, music offers a little touch of vibrancy that can lighten up a day. Thus, there are few things more saddening than forcing yourself to skip that Kanye song on the Spotify playlist your friend sent you or switching radio stations when Chris Brown’s “Freaky Friday” comes on, depriving yourself of blissful noise just because of incidents in the artist’s personal life.

Art in modern day society is the result of a cohesive workforce. Behind every music track branded by an artist are at least 30 people producing and editing; behind every movie created by a producer are dozens of contributors; behind every talk show is a team of editors and writers. Successful art, although often branded under a single name, is a creation born from the intellect of many individuals.

Consequently, retracting support for art does little to nothing to fight the actions that the artists have committed. Oftentimes, individuals like myself are berated and judged for tuning in to artists like XXXtentacion or watching a Harvey Weinstein movie because supposedly, we are supporting the artist in question and all of their actions by listening to their music and instead, we should be fighting what they did.

Is that really the best way to fight the battle against sexual assault and violence? By not giving the artist a minuscule royalty?

There is nothing productive in focusing on those who have already committed crimes, are already serving prison sentences and are consequently already learning their lesson. No, change does not come by living in the
past. Change comes by fighting for the prevention of the actions these artists have committed in the future. Make a change by supporting RAINN, the largest anti-sexual assault organization in the US; make a change by supporting FADV, an organization committed to ending domestic violence.

Since boycotting art does not benefit us, it ends up causing a personal net loss. By preventing ourselves from enjoying certain pillars of art, we are not only hurting ourselves by decreasing our range of choices, but we are also hurting the individuals who have done nothing wrong and simply worked with ignorant people. By all means, boycott what is wrong, but if you’re going to try then do so with substantive actions and not pointless limitations on your everyday life.

Due to the lack of productivity in our disapproval of certain artists, it is unnecessary for us to restrict ourselves from art branded with people who have done bad things in the past. Although actions like sexual assault and domestic violence are entirely inexcusable, it’s almost cruel to stop listening to the music we enjoy when the impact on the artist is nearly imperceptible.   v

We’ve all done it: listened to a Chris Brown classic, rapped along to R. Kelly’s “Ignition” or watched a Harvey Weinstein masterpiece, think- ing “I know he’s a bad person and did ____ but this [song/art/movie] is just so good!”

Pop culture is, it seems, incessantly plagued by the recurring trope of the brilliantly talented and extraordinarily popular artist who committed some despicable crime or simply turned out to be a bad person. And though few deny the validity of allegations made against their beloved celebrities or attempt to excuse their actions, most of the divisiveness comes from a pressing moral issue: should we separate the art from the artist?

The former perspective is certainly tempting — I cannot deny that I find XXXtentacion’s lo-fi rap calming or that Kanye’s “Heartless” made it on my 2000s throwback playlist. But it has become impossible for me to listen to such artists without at least a twinge of guilt — the feeling that, for less than three minutes of enjoyment listening to X’s “changes,” I’m supporting an artist guilty of battery and the domestic abuse of his pregnant girlfriend, and who glorifies violence in his own music.

That is not to say, of course, that consuming the work of those who have done terrible things means you support their actions — watching “The Cosby Show” or “Roseanne” reruns doesn’t make you an apologist for sexual assault or racism. But try as we might, it is both unethical and illogical to completely separate the art from the artist.

Art is often seen as “other” than, or inherently above the paltry troubles of the mortal world, but the reality is that art — whether it is music, movies, books or paintings — is undeniably influenced by factors from the world around us. Any work an artist creates is inextricably intertwined with everything in their life, from political inclinations and morals to their drug use, upbringing or disastrous romances.

There are not two Bill Cosbys, Woody Allens, Roseanne Barrs, XXXtentacions, Kanyes, Harvey Weinsteins, R. Kellys or Chris Browns — for all of the aforementioned artists, the same mind that engineered the inspired works of art that we all know and love committed the heinous and abhorrent crimes that we condemn.

And so begs the question: if artists don’t separate their art from themselves, why should we?   v