“I would like to read you guys a poem,” Palo Alto High School junior Anya Trubelja says, flattening her notebook with a hint of a smile before leaping into recitation. “The poem is by Big ‘D.’ The ‘D’ stands for depression.” 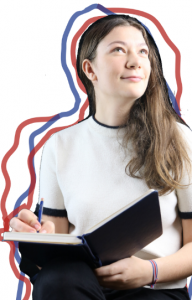 For three consecutive Teen Art Council Open Mic Nights, Trubelja’s comedy stand-up performances, laced with themes of identity exploration and self-deprecation, received wide praise — and laughter — from student audience members. “Depression,” the poem she initially performed at her first Open Mic last May, is awash with simultaneous self-doubt and ego, nods to the emotional paralysis of mental illness and includes every possible synonym for penis.

Trubelja is a fan-turned-performer — she frequented Open Mics since middle school before eventually stumbling into performing stand-up comedy herself.

“The first time I actually performed was just really fun and I decided to keep on doing it,” she says. Trubelja says she scraped together “Depression” while fooling around with friends during lunchtime. She praises junior Sofia Peterson — a friend and her on-demand comedy editor, even during late-nights before performance day — for editing spelling imperfections, catching flat jokes and listening to her practice. 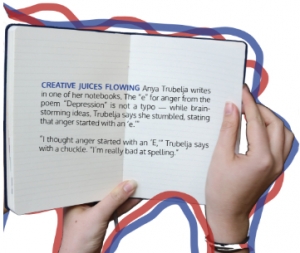 “Either she [Trubelja] shares a document with me or reads it out and I listen to her and give her feedback,” Peterson says. “I also time it to make sure she’s within a five-minute time limit.”

“I help a lot,” fellow editor junior Isabel Armstrong sarcastically interjects to chorus of chuckles. “Anya is a star, she’s incredible. I’m just an editor and I add commas where they need to happen.”

“Yes, commas,” Trubelja says. “I do not believe in punctuation.”

The resulting poem was a hit among audience members, so Trubelja performed at the Open Mics again, and soon became a fan-favorite.

“Some people have come up to me and been like ‘You’ve inspired me to do stand up,’”
Trubelja says. “That’s really cool. I get to do something that inspires other people — I find that really amazing.”

While her primary craft is eccentric comedy, Trubelja’s side project is just as out of the ordinary. If your prototypical image of a Serbian mafia member is a tough, middle-aged mob boss, think again —for Trubelja claims she is one as well.

“There is this a joke that I’m a part of the Serbian mafia,” Trubelja says. “I’m half Serbian and half Croatian and there are a lot of stereotypes … so I kind of play on that.”

Although the joke may initially sound fantastical, Trubelja uses this comedic trope to explore her disconnected identity as a first-generation American. She says she doesn’t know much about her parents’ home countries, and her Croatian is loše — or not as fluent as she desires — so researching her parents’ home countries for her comedic acts provides her with an excuse to brush up on the political happenings in the Balkans.

“In one of my first stand-ups, I made this joke about how much bureaucracy there is in Bosnia because I think there’s like seven presidents,” Trubelja says. “We have all the Bond villains, but seven times more bureaucracy. We’re like Russia lite.”

While her comedy is laced with (literally) depressing content and European political jargon, the themes behind her comedy are self-exploration and connection.

“It [the joke] sounds horrible, but I feel more connected to my culture,” she says.

In place of a comedic transition between jokes, Trubelja yells ‘transition.’ This clumsy approach developed from herself-described unsuccessful attempt to emulate the transitions of John Mulaney, a comedian she admires.

“Mulaney has amazing transitions — you don’t even realize that he’s moved on to the next thing. I wanted to do that, but it’s really difficult. So, at first I just put it [‘transition’] in as a placeholder,” Trubelja says. “And when I was practicing in front of my friend [Peterson] … she was the one who’s like, ‘you should just leave it.’”

Trubelja’s signature transition is not her only tribute to other comedians. She draws inspiration from comedians Bert Kreischer — who she appreciates for his freewheeling comedic style — John Mulaney, Ali Wong and Trevor Noah.

“One of the rules of comedy is you’re not supposed to laugh when you’re on stage, but … more and more comedians are starting to break [that] — like Bert Kreischer,” Trubelja says. “He laughs all the time.”

The styles of Trubelja’s muses are prominently reflected in her performances — for example, like Kreischer, she allows herself to let a chuckle slip through onstage. She says this casual style of comedyis partly why she appeals to teen audiences.

“Being able to laugh at yourself is what most like teenagers find appealing,” Trubelja says. “Like … just being able to swear on stage and talking about d—-.”

Trubelja’s favorite comedians use varying approaches, topics and comedic auras. Her main female influence is Ali Wong, notable for comedic explorations of economic stratification, her children and her Asian heritage; however, Trubelja says Wong’s jokes are executed in a manner that defies expectations placed on female comedians.

“Ali Wong is one of my only female comedian role models, so I think that’s like really cool that I get to bring myself on stage,” Trubelja says. “The fact that I am a female comedian — I don’t like that term but — there’s definitely this idea that women aren’t funny, so it makes me very happy that people like actually like my stand up.”

“I am proud of being a woman but being a female comedian implies you’re a lesser comedian. … That’s why I love my character, who is the first captain in the Serbian mafia. In my mind, she is a powerful woman.”

Trubelja also believes that the term boxes women comedians into topics solely regarding the female experience.
“‘Female comedian’ has a connotation like ‘I’m going to talk about gender stereo- types,’” Trubelja says, “I kinda try to have fun and try not to get into all those dark topics.”

Instead, she focuses on uplifting, formative comedy over contentious topics.

“I avoid talking about politics and social justice issues … It [comedy] is also an escape,” Trubelja says. “I want people to connect but also to be able to escape with fun facts.”

At the most recent Open Mic on Feb. 1, rainbow-shifting glow floods the community room. High schoolers fill the room, either sitting in chairs or on blankets on the floor. While Trubelja says that she is unsure if she will continue to perform or for how long, the audience welcomes her to the stage with a roar of applause.

“Basically, I’m famous now,” Trubelja says sardonically, in reference to this profile. “So I expect all of you to be laughing at my jokes. To answer your question, yes I have let the fame all go to my head and yes, I will now be selling merch.”