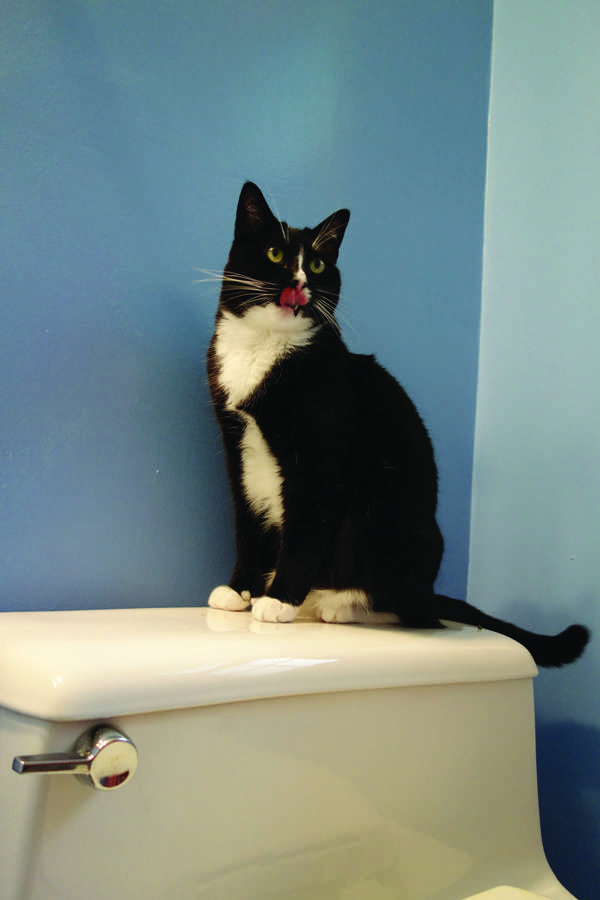 A frosty wall of air emanates from the confines of the freezer, a chilled whoosh numbing every being in its path. Among the occasional loose popsicles stuck into the crevices and other typical contents, an unsuspecting, pale, Ziploc bag is tucked alongside the ice cream on the lower shelf.

Inside this ordinary baggie resides the unordinary: packed, frozen, textured bodies with pink whiskers, ears and dainty feet that used to belong to once-living, squeaking mice. After the freezer, the mice make a stop at the microwave, spin around and thaw out for 30 seconds, and voilá, dinner is served.

Next time you are looking for some lovin’ from the rough scaly skin of a bearded dragon, or care to eat some fresh, warm eggs in the morning, consider owning one of these nontraditional, unusual and mildly freaky “pets.”

Junior Aashli Budhiraja is the owner of a black and white spotted feline Mittens who was named for her four white paws which, when contrasted with her all black coat, resemble mittens.

When Budhiraja adopted sisters Mittens and Bella three years ago, she promptly realized that Mittens was born with one extra toe on each paw, a condition known as polydactylism. Instead of the typical four toes per paw, Mittens has six per paw, totaling 24. These extra toes act like opposable thumbs, and have given her unusual talents most cats would not be able to physically perform.

“She is able to pick up pencils, open doors and flush the toilet,” Budhiraja says. “The only problem is that she gets scared when she flushes it.”

Paly junior Charles Slakey owns spiny, scaled bearded dragons Zeus and Bandit. These two can be found basking in the lamplight of their glass tank, climbing or clinging on to a leafy branch.

Bearded dragons are typically identified by their flat and scaly bodies, triangular head and lethargic nature. Slakey, who refers to them as “beardies,” decided to get the year and a half old Bandit and Zeus because he thought they were fascinating, unique pets to interact with.

Slakey greatly enjoys these pensive reptiles, but does warn those interested in owning one. 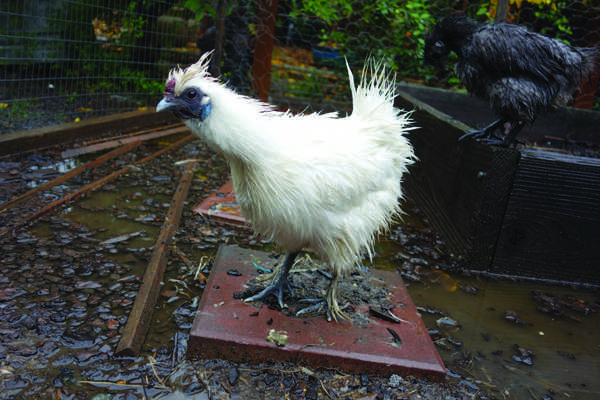 Senior Julia Sanchez and her family own four chickens. The three-year-old chickens, raised by the Sanchez family since they were chicks, reside in a coop in her backyard by their garden. Barley, Jellybean, Butter and Corny dine on fresh corn, leftover vegetables and chicken feed.

These fluffy, multicolored fowl are part of a smaller species of chickens, so the eggs produced are also smaller as a result, according to Sanchez.

“We get lots of eggs,” Sanchez says. “We only ever have to buy eggs anymore if there is a particular recipe that requires more than six or so eggs, but sometimes we have more than we know what to do with.”

As long as you have a moderately sized backyard and are prepared to construct the necessary chicken-safe environment and tolerate the clucking, Sanchez highly recommends these useful, harmless and unconventional pets.

“They are noisy in the mornings, but I don’t mind and my neighbors have never complained,” Sanchez says. 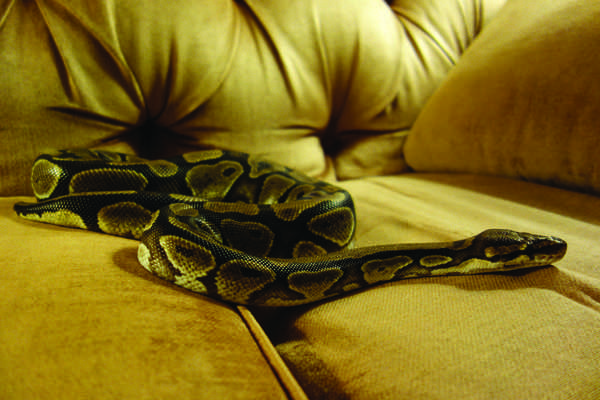 “She [my mother] likes animals, especially reptiles and birds,” Filseth says. Although he has to feed Max rats and mice, his family decided to change from live food to frozen mice for humane reasons.

Although the squeamish or faint-hearted may rethink owning a snake, Filseth adds that one benefit is the easy upkeep.

“[Of all my pets] the snake is the easiest one to take care of,” Filseth says.”He eats once every couple weeks, and we clean the cage once a week.”

Filseth in general says he recommends owning a snake. His, in particular, is extremely social.

“Ball pythons are actually really nice and they aren’t aggressive at all,” Filseth says. “They get kind of scared, but the aren’t threatening or anything.”