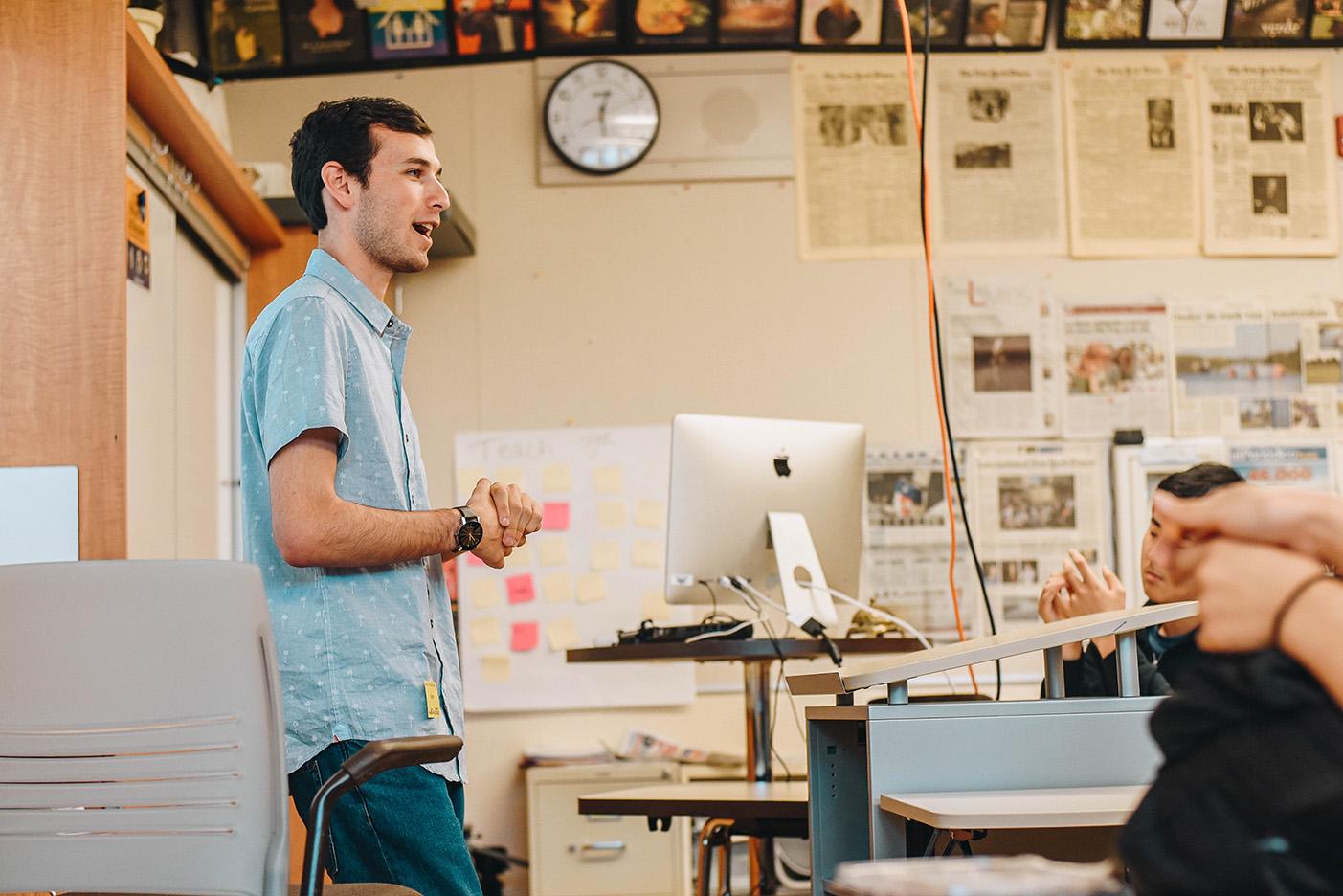 Alum recounts reporting from the eye of Hurricane Harvey

Life on the line, Viking Award winner, former InFocus anchor and son of a Palo Alto history teacher Wes Rapaport was one of the few journalists who weathered the eye of Hurricane Harvey in Rockport, Texas last week.

Yesterday afternoon, Rapaport recounted his journey to an audience of students and faculty in the Media Arts Center.

Courage and curiosity — these are the traits Rapaport encourages young journalists to cultivate and which helped him survive Harvey last week.

“One of my jobs is to cover big state news,” Rapaport said. “Hurricane Harvey was one of those things.”

Up until storm warnings and safety concerns forced them to retreat indoors, Rapaport and his team shot live reports amid the wind and rain.

“There was a little bit of a ‘Lord of the Flies’ thing where people were trying to figure out their last resort plans,” Rapaport said, recalling how his small crew and the remaining stragglers gathered blankets, Gatorades and snacks before hunkering down together to weather the storm in the lobby of the Fairfield Inn. 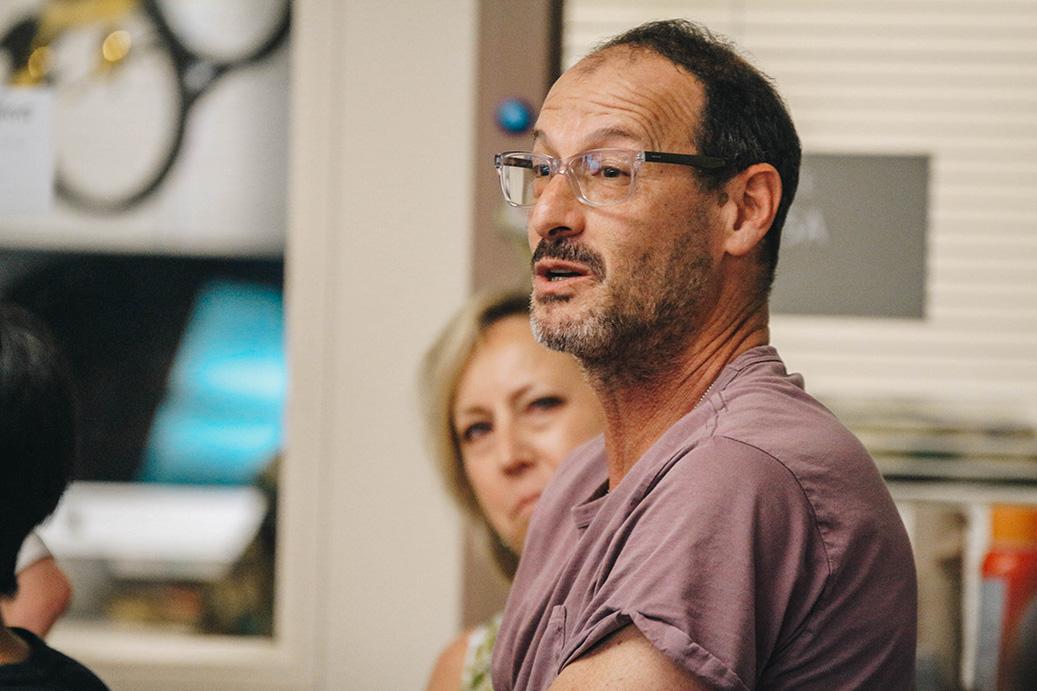 History teacher David Rapaport speaks on his worry and pride as a parent when his son was reporting on Hurricane Harvey. Photo by James Poe.

“Until you see it for yourself, you really don’t understand the severity,” Rapaport said. “One of the walls of our hotel was starting to come off the building. … It was chaotic, it was windy, it was raining, there was water bubbling in from the front door.”

The group lost cell service soon after, and were unable to let others know they were alright until the next morning.

For family members, this was terrifying.

“Thousands of miles away, we could do nothing,” said David Rapaport, the reporter’s father who was in Palo Alto. “Both my wife and I … did not sleep either Friday or Saturday night. When we got the call from him in the morning (on Saturday), I can’t even begin to express — I mean the word relief doesn’t capture the emotion.”

On Saturday, the TV crew roamed the area, surveying the damage and searching for stories to share.

“It felt like a movie set … like we were on the set of ‘Twister,’” Wes Rapaport said. “It was really a scary thing to be a part of and to be around because you realize, these are people’s livelihoods. I can’t imagine … seeing my home in a pile on the ground. That was reality for a lot of people we came into contact with.”

Amidst the debris and destruction, the team also faced dilemmas on how to approach and interview battered hurricane survivors. 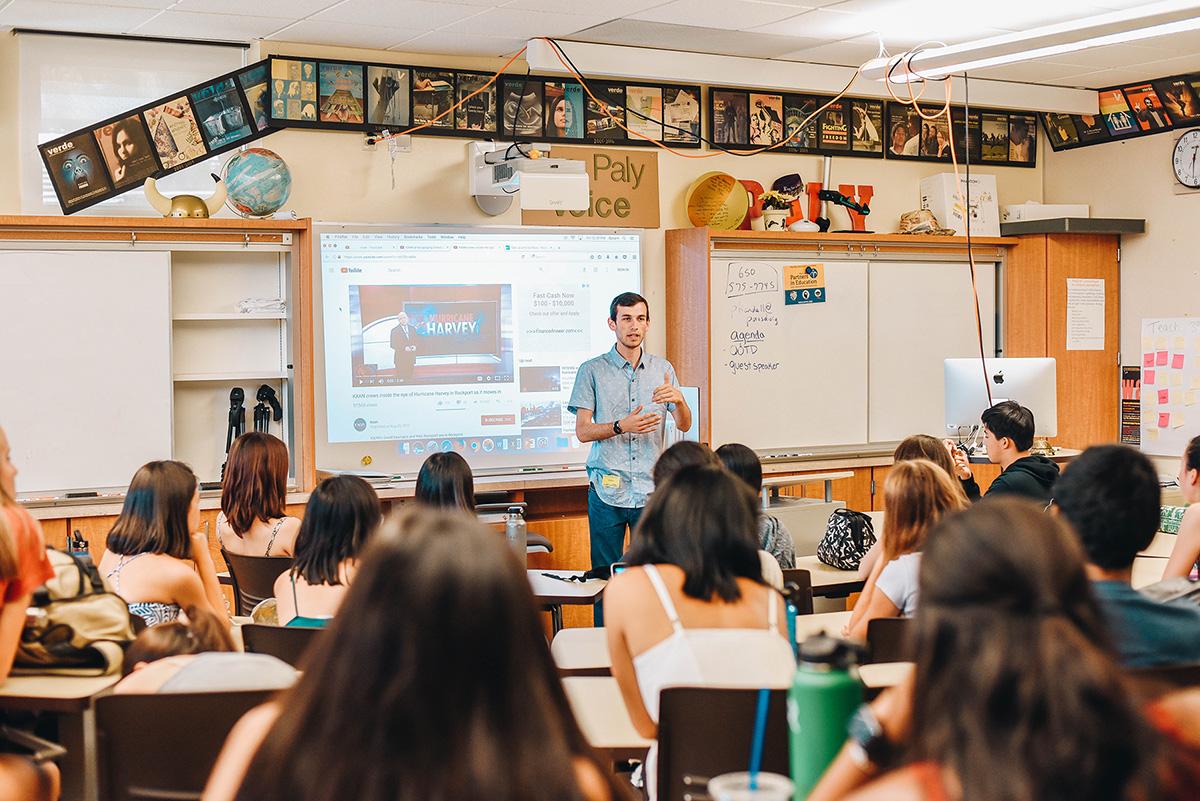 Paly alum and professional reporter Wes Rapaport narrates his journey in the wake of Hurricane Harvey. Photo by James Poe.

“It’s tough to walk up to someone who’s picking through what’s left of their lives and say ‘Hi, can we talk to you for the news?’” Wes Rapaport said. “How we approached it was we wanted to make sure they were okay, but then also … we wanted to put a human side to this destruction.”

From his own experiences in the fray, the young journalist advises student journalists to turn interviews into dialogue and connect with interviewees.

“If there’s one thing to take away, when you’re doing interviews with people, try to make it as much of a conversation as possible,” he said. “When it’s conversation the story writes itself. You’ve got to be honest about what you’re doing and be as humanly relatable as possible.”

Despite his worries about his son’s arduous career, David Rapaport expresses pride in his son’s path.

“We knew he chose a difficult profession,” he said. “But it’s an extraordinarily important profession. We trusted him to use what he learned here at Paly. He set his path in this field from long ago and we’re really not at all surprised that this is what he’s doing and he’s good at it.”

Six years after his graduation from Paly, Rapaport believes it is paramount for current students and aspiring journalists to be curious and courageous.

“Be willing to take risks, … question, and find the positives,” Rapaport said. “As heartbreaking and sobering as the damage was, it was also really humbling and inspiring to see people’s attitudes. Not every story is going to be fun, but understand what you’re doing and make a difference.”