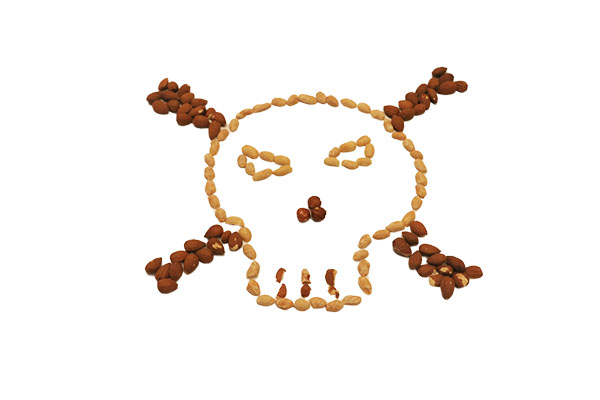 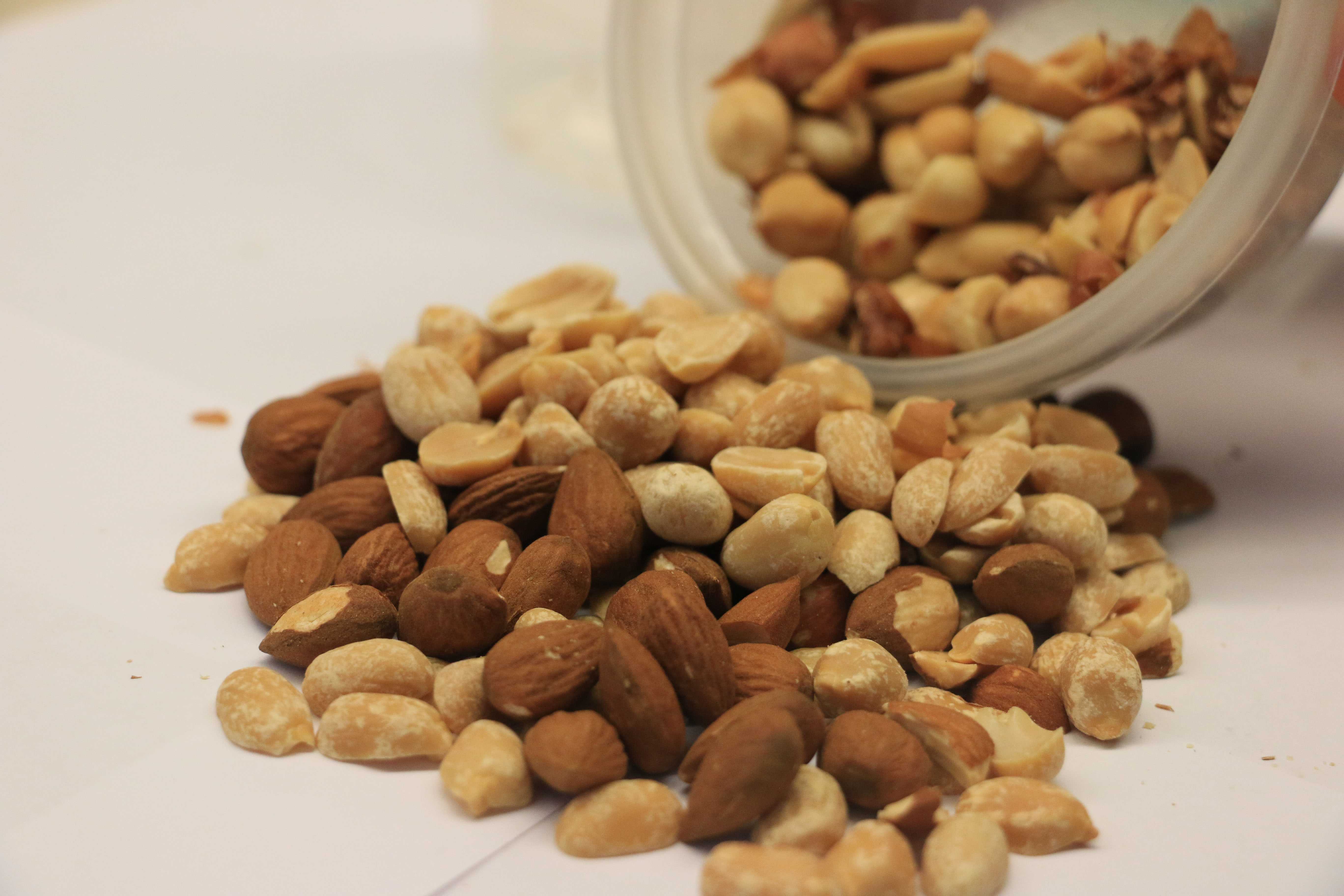 Many students joke that finals week is a real killer, but for Scott, this phrase took a new meaning. Scott, a Palo Alto High School freshman whose name has been changed to protect his identity, recalls finishing his first period exam and walking onto the quad, only to see tables lining the quad filled with packets of nuts being doled out by the Parent Teacher Student Association.

Because Scott has a life-threatening peanut allergy, his mind shifted from thinking about the next period’s final to stressing about thousands of peanuts circulating the campus.

“I saw tables on the Quad full of nuts, and I immediately felt unsafe,” Scott says. He entered his third period final not only preoccupied by the test, but also by the possibility of coming into contact with a peanut.

For Scott, an action as simple as touching a single nut and then rubbing his eyes can cause irritation. In the most extreme case, if Scott were to eat a food containing peanuts, his allergy could potentially escalate into a fatal reaction.

“I didn’t see anybody eating them in my class, but I knew people might have had them in their pockets,” Scott says.

Scott recalls eventually being able to focus on his final, but the thought of a potential allergic reaction worried him more than usual. He phoned his mother, who after contacting the administration, assured him that the situation had been taken care of. However, when Scott returned to school the following day, the popular peanut filled trail mix packets were still being distributed.

“I just had to keep a safe distance from my friends that week,” Scott says.

Scott cannot recall the first time he came into contact with a peanut and discovered his allergy. Neither can he remember the last time he paid a visit to the hospital for an allergic reaction; however, this does not lighten the situation. Allergic reactions are known to increase in severity each time, and for Scott, there is no knowing whether the next one could be fatal. Guessing the severity of the next reaction is a game that neither Scott nor his parents are keen on playing, so they diligently ensure that Scott stays aware of the peanuts that might be in his surroundings throughout the school day.

“Scott does not go any place without an EpiPen on him,” his mother says. “Not to the park, the movie, not even on a walk around the block where I know zero food would be. Even though they are about $150 a piece, I keep them in my purse, in his backpacks, by the back door … it’s just a way of life,” says his mother, referring to the epinephrine auto-injector used to quell severe allergic reactions almost instantly.

Scott was likely not the only Paly student with a nut allergy who felt anxious when he saw the snacks being distributed around the campus during finals week. Peanuts are one of the most common food allergies, and as the number of people with food allergies rises, the school administration will have a problem to tackle.

The protocol in a nutshell

Concerned about about their son’s safety on campus, Scott’s parents had already approached Palo Alto Unified School District staff members several weeks prior to finals week to ensure that all students with anaphylaxis felt comfortable at school. Anaphylaxis is a severe, potentially life-threatening whole-body reaction that occurs when a person is exposed to a chemical that causes an allergic reaction. Food allergies are typically known to trigger anaphylaxis, and common symptoms include difficulty breathing, hives, wheezing, skin redness and swelling of the face.

PAUSD created a district-wide protocol to protect students like Scott who have a risk for anaphylaxis two weeks before trail mix packets containing peanuts were handed out during finals week. However, only district staff received information about the creation of the protocol. Within its guidelines, the protocol states that teachers must provide two weeks notice to parents before nuts are brought to class. The protocol does not and cannot explicitly extend to groups like the PTSA who are unassociated with the school.

“If this miscommunication [with the PSTA] had not happened then, then it would have happened at some point between the protocol and who receives that protocol,” Assistant Principal Jerry Berkson says. “We are working on ways to communicate with people on the fringe.”

Beyond Paly, many new policies have been put into place on a state and national level in response to fatalities triggered by nut allergies. A new California law implemented this year requires school districts to stock EpiPens, which can be administered to any student, staff member or person on campus in the event of a potentially life-threatening anaphylaxis. According to Berkson, even before this bill was signed, the health office in the Tower Building was stocked with a supply of EpiPens. 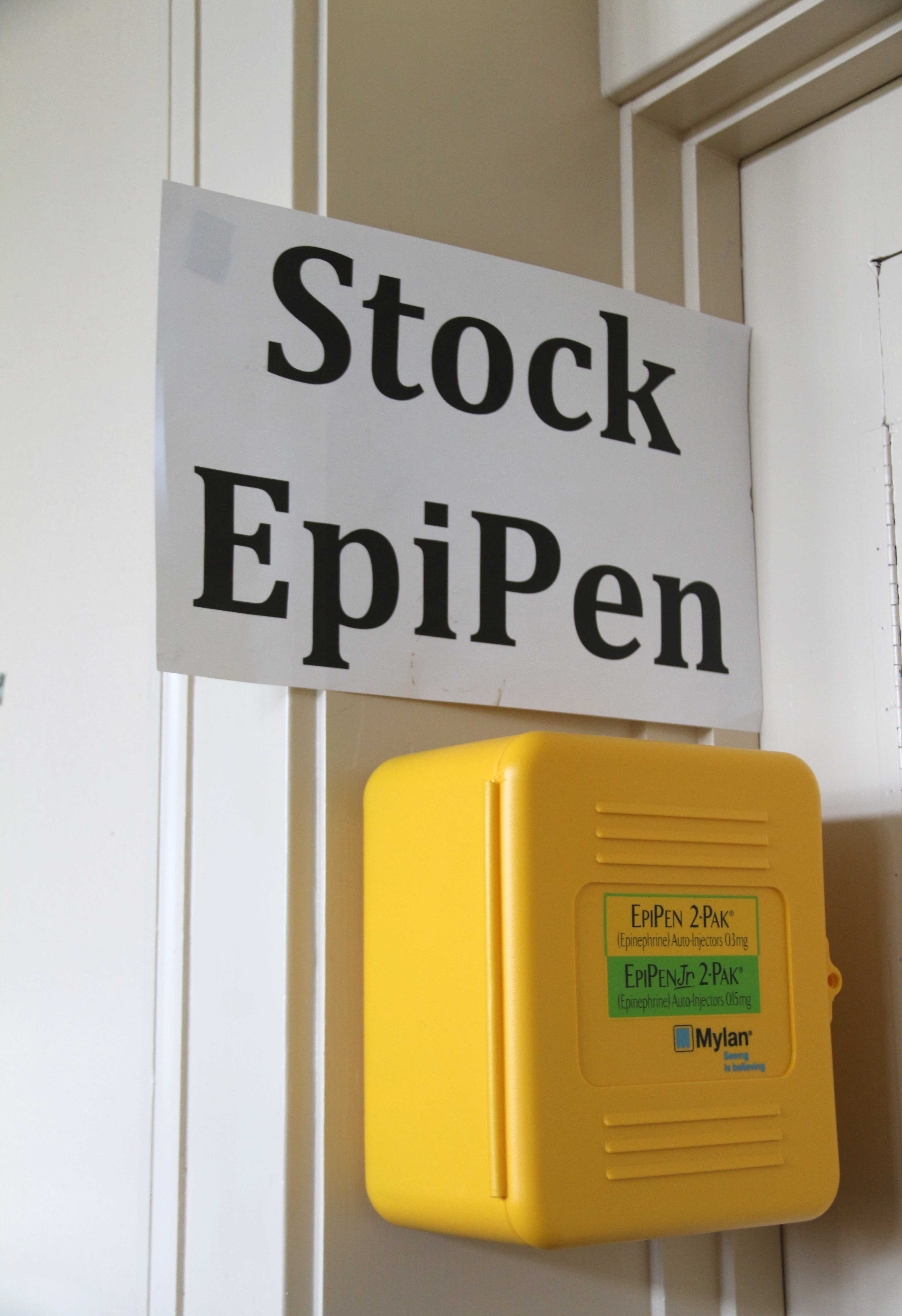 The Palo Alto High School health office houses a supply of epinephrine auto-injectors which can provide relief from allergic reactions.

As a direct result of the protocol, the administration continues to implement measures to promote the safety of students with anaphylactic reaction such as encouraging teachers to wipe down desks to prevent contamination and creating signs to designate classrooms as “peanut-free zones.”

Scott’s English teacher, Kari Snell, recognizes the importance of making a classroom a safe environment for a student with a nut allergy.

“It terrifies me to think that someone would have some sort of allergic reaction,” Snell says. “I don’t want to be in that situation … but I want to take personal responsibility because I am the one who has the student.”

However, even if a teacher makes an effort to keep the classroom clean using wipes, problems may arise due to the use of shared surfaces such as laptops. A 2013 study published by the Canadian Society of Allergy and Clinical Immunology shows that peanut residue can linger on a surface for at least 110 days if no cleaning occurs. On the other hand, cleansing the keyboard proves a challenge because excessive moisture could damage a laptop’s hardware.

If teachers allow students to eat in class, they will have to vigilantly watch what foods students are eating, and students will have to avoid eating foods containing nuts or traces of nuts in class.

While Snell wishes to help students with allergies, she also lets her students eat in class. She believes that food provides fuel necessary for 90-minute block periods, and allows eating in class as long as students clean up after themselves and do not cause a distraction. However, she runs the risk of unknowingly allowing nut products into her classroom.

“We can’t tackle everything, but we can do the things that are in our control,” Snell says.

In general, the life of a high school student with a nut allergy starkly contrasts his or her elementary and middle school experiences. In elementary school, Scott says people knew to keep the peanut butter and jelly sandwiches away from him, and the peanut-free tables provided a guaranteed safety zone. However, in high school it is now Scott’s own responsibility — not that of his parents or the school — to monitor his allergy. Scott has to be extra careful about what his classmates are eating because it is more difficult for his teachers to control what enters and exits the classroom.

Besides the students’ friends and the administration, most people do not know about their allergies. According to Joshua Cheng, a junior with a peanut allergy, classmates sometimes eat food containing nuts in his classes.

“People that don’t know me that well aren’t aware of it or of its severity,” Cheng says. “Usually I just try to stay away from them. I don’t usually say anything. I just have to avoid getting too near to them because the smell of it can be very intense for me.”

Even though nuts may not appear to have been in a food or on a table, the lasting presence of peanut proteins is a concern. Scott and others with peanut allergies must be wary of cross-contamination — when two foods come in contact and their proteins mix on a shared surface such as a restaurant cutting board.

At the same time, teens represent an age group of people with a high risk of experiencing a severe life-threatening reaction after consuming a food containing an allergen, according to Julie, the mother of two food allergic students.

“They’re out at a party; they’re not paying attention to what they’re eating,” Julie says. “Maybe they’re thinking a food looks safe. Maybe they are drinking too much, and they eat something that’s not safe. Maybe they have had too much to drink to even realize, ‘I’m having an allergic reaction. I have to get medication.’ It’s definitely a very dangerous [time], the teenage years.”

The search for the cure

Every two weeks, Scott pays a visit to El Camino Hospital in Mountain View as part of a research study associated with the Sean N. Parker Center for Allergy Research at Stanford University. As a voluntary participant in one of the eight studies directed by Dr. Kari Nadeau, Scott receives an increased dosage of peanuts during each visit in hopes that this technique will eventually desensitize him to peanuts and lower his risk of allergic reactions. Currently, Scott’s daily dosage of peanuts is two a day, albeit in powder form. For a kid who, six months ago, would suffer a severe allergic reaction when coming into contact with even peanut particles, two peanuts a day represents great progress. Yet his progress did not come without sacrifice.

“At first, it’s hard because you can throw up; the nuts don’t sit well in the stomach,” Scott says.

Nadeau’s research has revolutionized allergy study in recent years because it can treat up to five food allergens. According to Gerri O’Riordan, the center’s chief operating officer, the center has had some promising results in the first phase of its multi food allergy research, but more research is needed to show safety and efficacy before it can become an FDA approved standard treatment.

In the meantime, Scott and others with nut allergies must continue to be vigilant about their surroundings whether they are at school or out and about as they engage in their busy social lives. Allergies will remain a hard nut to crack, but hopefully doing well on his finals will be Scott’s only concern during spring semester finals.