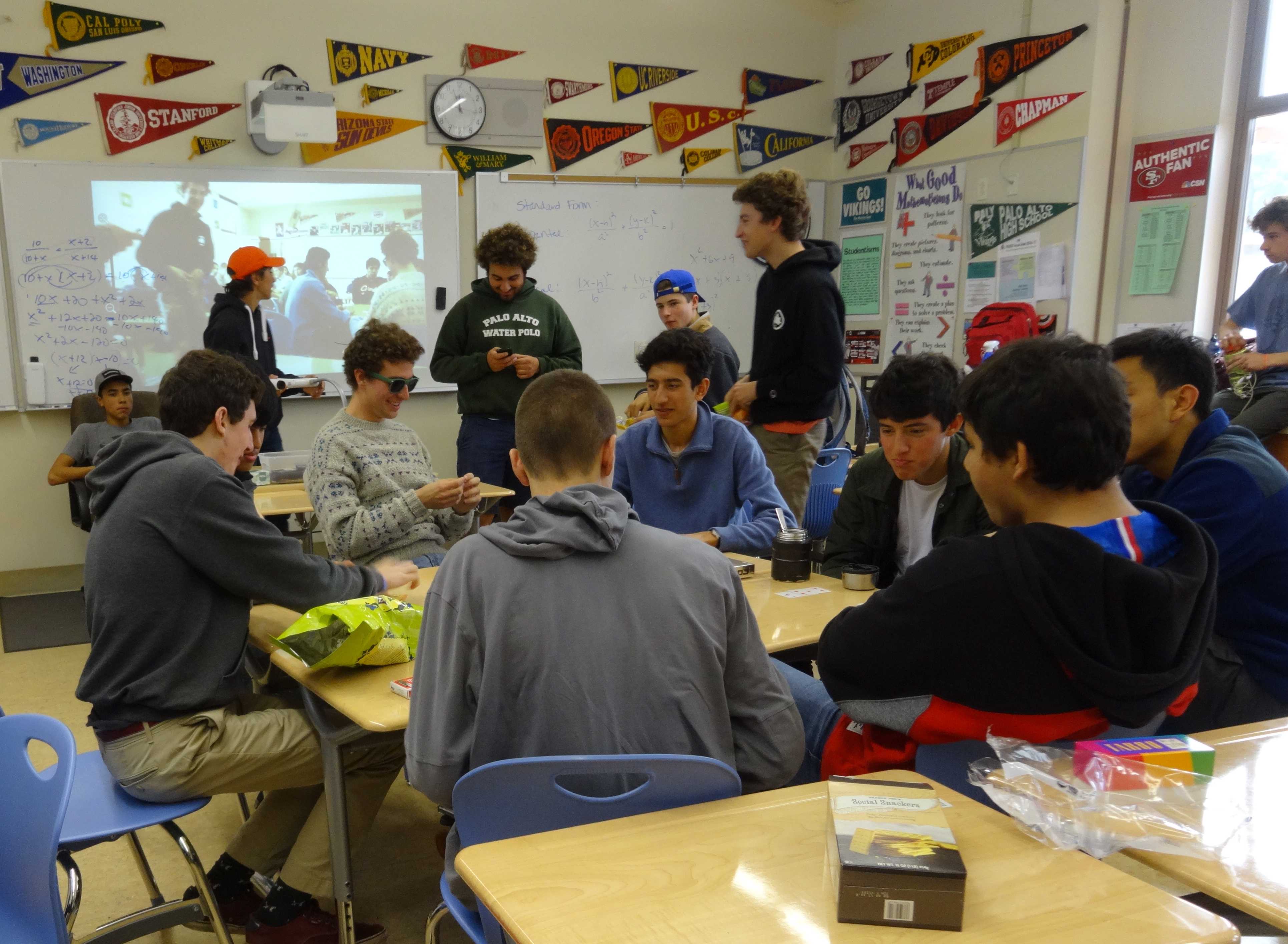 All Fun and Games: Club Brings Board Games Back

One student starts flipping over the shiny blue and red cards for Codenames, while a different group brings out the box for Taboo, along with a bag of chips. Gasps of outrage resound from a table as one player slaps down a jack. Another member enters, yells “Board Game Cluuub!” and is greeted with a collective cheer. The club is in its own world, full of snacks, music and games.

With the arrival of video games such as Pac-Man in the ’70s, it seemed inevitable that board games would become yet another pastime made obsolete by technology. However, younger  generations have recently re-embraced board games. At Palo Alto High School, in particular, this classic mode of entertainment is coming back into vogue.

Games such as Exploding Kittens, Codenames, Werewolf and Taboo are a popular way for Paly students to spend time with friends and de-stress, and the increasingly popular Board Games Club is bringing students with a passion for board and card games together during lunchtime. Every Thursday, room 860 is transformed from classroom to club as students spread out among the tables and choose from an array of board and card games.

“We play board games, and we also listen to music and just hang out,” says senior Lucas Washburn, club co-president. “Especially if it’s a rainy day, it’s really packed in here.”

The recent rise in popularity of board games is evidenced by a 28 percent sales increase in 2016, reported by the NPD Group, a market research company. But the club itself is not new, according to Washburn and  fellow co-pre

“We were in the club last year … and friends with the seniors [who ran the club] and they wanted us to keep the club going,” Alasti says.

However, the club has grown much larger in the last year. Now boasting over 85 signups, Washburn attributes the rise in attendance to good advertising and word of mouth.

“I’ve always been into it [board games] … I don’t know if everyone here is that into it, so it’s cool that we’ve been able to introduce it to people too,” Washburn says.

Senior Maria Fletcher, a regular club member, says participating in the club exposed her to several new games and provides many students a well-deserved break from the stresses of school.

“I think we tend to shut off during the school day … Board Games Club just mixes it up, makes your day exciting … and helps me stay focused because then I have a goal to get through class so I can go to Board Games Club,” Fletcher says.

Her passion for board games resurfaced in high school, when she realized she wanted to spend her finite time face-to-face with friends.

“I had more time in middle school to just goof around, but now that you have less time,” Fletcher says. “I’ve realized how important that time is, and I’d much rather be spending it with my friends and having
playing board games than going online.”

“I’d much rather be spending it with my friends and having fun playing board games than going online.”p

It is this same focus of creating a strong community and a sense of camaraderie that Board Games Club tries to provide, Alasti says.

“When the bell rings during third or fourth period you know it’s gonna be a good next 35 minutes,” Fletcher says.