Aiding the Community with Ada’s Cafe 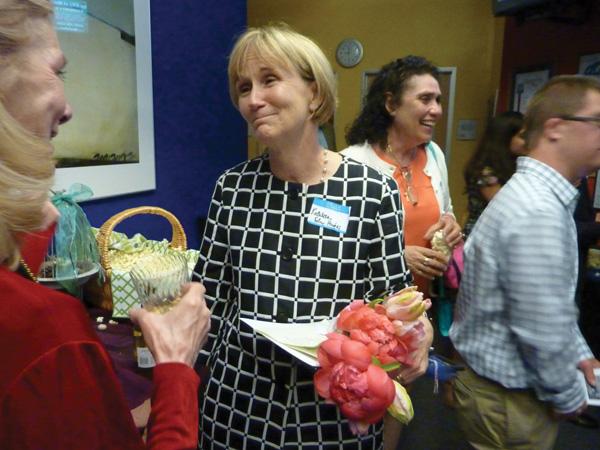 Kathleen Foley-Hughes speaks with a co-worker after receiving her Local Heroes award at the Midpeninsula Community Media Center for excellence in the community for Ada’s Café on May 11, 2013.

The lights brighten overhead as Kathleen Foley-Hughes steps onto the platform and accepts the microphone to make a speech. She thanks her family and friends for supporting her on her mission to better the Palo Alto community. Foley-Hughes stands among five other Local Heroes who have received awards this year for outstanding achievement and contributions to the Bay Area community. For Foley-Hughes, this achievement was the creation of Ada’s Cafe, a nonprofit organization intended to provide work experience and life skills for people with mental disabilities.

Foley-Hughes founded Ada’s Cafe, which was named after the Americans with Disabilities Act, in 2008. The Cafe evolved from two school-affiliated programs formed to integrate special needs students into school life: the Terman Tasty Treats Cafe and the Gunn Gourmet Cafe, held at Terman Middle School and Henry M. Gunn High School, respectively. Over the past few years, the organization expanded to become a catering service, and will  open as a full-time Cafe at the new Mitchell Park Community Center early this summer.

Foley-Hughes was inspired to create the Cafe by her experience as a parent of a special needs child. Her son, Charlie had been in the special education program since he was in kindergarten, and Foley-Hughes, aware that he would not attend college, wanted to provide him and other special education students with skills and experiences for success in their future lives.

“I started to ask the question, ‘what’s the path for a student who isn’t going to college but still wants to learn?’” Foley-Hughes says. “I wanted to create something that was on campus so that students in special education could be a part of their community and learn things that might be applicable to their future lives.”

Terman was willing to help, and offered Foley-Hughes a space on campus where she could build a food service for the school staff and faculty. There, Foley-Hughes helped teach disabled students useful skills such as handling money, preparing food and working with others as a team. The Terman Tasty Treats Cafe was a huge success and was enormously popular with the school’s staff, leading Foley-Hughes to bring her program to Gunn when her son Charlie graduated.

Foley-Hughes values this connection between disabled and non-disabled students, as she feels this would not necessarily happen without an organization such as the Cafe.

“I saw this amazing interaction between groups of people who normally don’t get to interact,” she says.

The Gunn Gourmet Cafe gained popularity, and Foley-Hughes decided that she wanted to expand her organization to a larger scale.

“I realized, ‘gosh, this would be great to take into the community’,” Foley-Hughes says.

As a result, Foley-Hughes formed Ada’s Cafe, which is now an official vendor of the city of Palo Alto. She welcomes anyone with or without disabilities to help in fostering an inclusive and valuable organization by employing people with mental disabilities and offering internships for non-disabled high school students.

“Our mission is to create good food, to hire adults with disabilities, and to involve [non-disabled] students,” Foley-Hughes says.

Sophomore Samantha Williams began working at Ada’s Cafe earlier this year. She was particularly drawn to the organization because it is a restaurant.

“I thought it would be really good for me, especially because I want to be a chef,” Williams says.

“I want to be normal, I want people to treat me normally,” Williams says. “Being able to work in an environment where people have a wide range of disabilities wanting to help the community, I think that’s really great.”

Like Hughes, Williams values the relationships she has formed with the Ada’s employees, and feels that more people should be exposed to organizations such as this.

Williams feels that if more people became involved in organizations like Ada’s, any sense of superiority towards those with special needs would dissolve.

“If everyone had a chance to work in a place like this, people would be more understanding of disabilities and not bully people about it,” she says.

Within the next few months, Ada’s Cafe will be open and running as a restaurant from 7 a.m. to 9 p.m. at the Mitchell Park Community Center Mondays through Thursdays. Foley-Hughes is excited to expand her organization and spread the word throughout the community.

“People who work there are so excited to work,” Foley-Hughes says.  “They want to work there.”