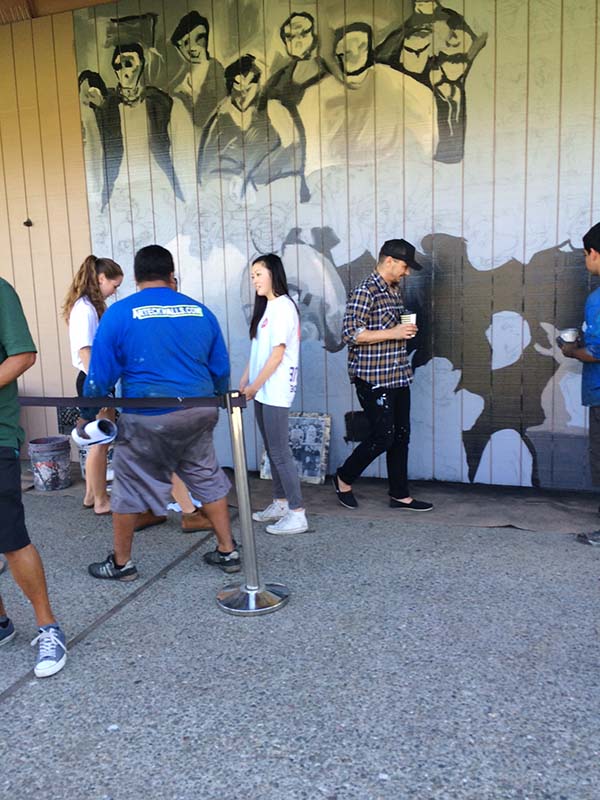 WORK IN PROGRESS – James Franco relaxes after talking to Paly students while working on one of his two unfinished murals on Oct. 13. The mural is inspired by pictures from the 1993 yearbook, and was painted with the help of AP Studio Art students and Franco’s own designers. Franco currently has art galleries on display in New York, London and Berlin.

The Palo Alto High School administration plans to paint over one of the murals painted on campus last fall by ’96 alumnus filmmaker and actor James Franco.

Principal Kim Diorio said that she is “very grateful” for Franco’s generosity and contributions, but that the mural completed the week of Oct. 13 on a Student Center wall, along with the other mural showcasing Paly football, was always planned as a temporary piece at Paly.

“It’s going to change,” Diorio said. “It was never meant to be permanent — we told him [Franco] when he wanted to do his murals that he was welcome to do it and that we would be painting over them someday, so it’s been up for a while, and I think most people are ready for something new.”

However, the administration does not know the exact date of the repainting.

According to Wojcicki, Franco spent four days working on the two murals on the Student Center and significant time on the 18 paintings displayed elsewhere on campus. The murals cost around $15,000 each, Franco told Wojcicki.

Franco has also long been a supporter of Paly programs, including $7,000 raised in ticket sales for the Media Arts Boosters grand opening, where he premiered a video art project and greeted guests for hours.

Diorio admires Franco’s work and appreciates the time he has taken to support Paly.

“I think they [Franco’s artwork] add a lot of color,” Diorio said. “Having them here for the grand opening was very special … It was a lot of time and energy on his part to get them hung, and they’re great.”

Wojcicki supports Franco’s paintings and has a small version of his mural in her room. However, she also understands why some may want a change.

“I think he [Franco] will be disappointed, but I think I understand the reason that people want it down because it looks … not very cheery,” Wojcicki said. “Somehow it [the mural] just got to looking much more sort of dark on the outside mural … I think it looks a little depressing, too, but I like the one in my room.”

While there have been a few complaints about the mural, according to Diorio, the positive comments outweigh the negative ones. However, Diorio and many students are open to the possibility of Paly students painting over the mural.

Some students are disappointed that the mural will be taken down.

“I don’t like the murals themselves, but I like being able to brag about having them at our school,” junior Mischa Nee said. “I appreciate the effort that James Franco put in so I would hate to see them taken down.”

“I wish they would display more artwork of other people,” junior Charlotte Hall said. “I really like the ones on the Student Center, but we could use some of the space devoted to his many pieces to other people’s artwork that also deserves a chance to be recognized and appreciated.”