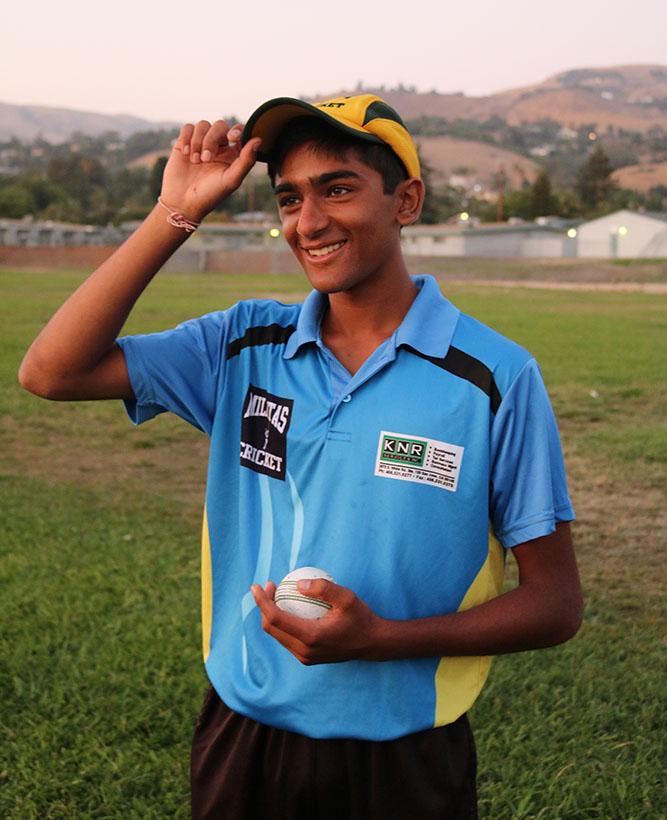 A Ticket to Cricket Success: A Student’s Journey to Professional Cricket

Nerves filled Palo Alto High School junior Pratham Kataria as he slowly walked up to the pitch. The opposing team was winning, and all the pressure rested upon Kataria’s shoulders.

He only needed to hit one of three sticks, or wickets, lined up behind the batter, but no one expected what would happen next. Taking a deep breath, Kataria started running toward the pitch, winding up with the ball as he picked up his pace.

The ball whistled as it hurtled towards the swinging batter before releasing a cracking sound. However, the sound wasn’t the crack of the bat hitting the ball — it was that of the ball toppling the wooden wickets. This process would repeat eight more times until Kataria bowled out nine people, essentially striking them out and winning the game for his team.

He recoumts it as the highlight of his cricket career — it’s extremely uncommon to take nine outs.

“Generally, people consider taking five outs to be very special,” Kataria says. “I took nine and the max you can take is 10.”

Call to the ball

Kataria is a bowler, the equivalent of a pitcher in baseball. He has played cricket for the last eight years, ever since he was introduced to it by his grandfather.

“My passion and desire for the sport came from him,” he says. “To this day, he still wakes up early just to watch India play a game.”

Despite the fact that it is not very popular in the United States, cricket is considered the second most popular sport in the world, according to WorldAtlas. The goal of the game is to score as many points, or runs, as possible, and teams are composed of batters and bowlers. The batter’s goal is to protect three poles, or wickets, from the bowler, whose aim is to hit the wickets.

For the past few years, Kataria has played cricket competitively, first as a bowler. He often plays in an adult league and at one point was ranked third in the U.S. for his age group.

“Playing with adults is a completely different experience compared to playing with players my age,” Kataria says. “Adults on my team have been playing for numerous years and they are … willing to share their knowledge with me so I can improve my game.”

To play at such a competitive level, Kataria trains upwards of 18 hours a week in his backyard. “Every moment I get free time, I play cricket — whether it be nine at night or six in the morning,” he says.

“Every moment I get free time, I play cricket — whether it be nine at night or six in the morning.”

Beyond time-consuming practices, cricket has taken Kataria to national tournaments around the globe, from Sri Lanka to England to Canada.

Although he has been successful in recent years, Kataria, like all athletes, faces challenges or “rough patches,” as he calls them. He mainly struggles with form, “like not getting wickets [or] getting hit for many runs.”

Despite these struggles, or perhaps because of them, Kataria says he has learned to remain positive in the face of adversity.

“You have to go through a tough patch and then get out from it,” Kataria says. “You have to break your old bad habits, which takes a lot of time.”

As for his current level, he describes it as “satisfactory.” Like with any other sport, there is always room for growth — for Kataria, it means improving on spinning, a technique where the bowler applies spin.

Action Beyond the Field

Kataria not only enjoys playing cricket, but also hopes it becomes more popular in the Palo Alto community.

Last year, for example, cricket was introduced in seven Palo Alto Unified School District elementary schools, in part due to the efforts of Kataria and Suraj Viswanathan, an individual director of the Board of the International Cricket Council.

“We tried to push cricket into the physical education curriculum in [PAUSD] elementary schools,” Kataria says. “Hopefully we can build it into more elementary schools and eventually into middle and high schools.”

“The sport [cricket] can involve everyone,” Viswanathan says. “Nobody is left behind and … everybody in a physical education program involving cricket was participating. That’s what we’re driving.”

In keeping with his wish to increase the popularity of cricket, Kataria shares his best piece of advice for aspiring cricket players: “Enjoy the game. It’s basic … but that’s what it is.”