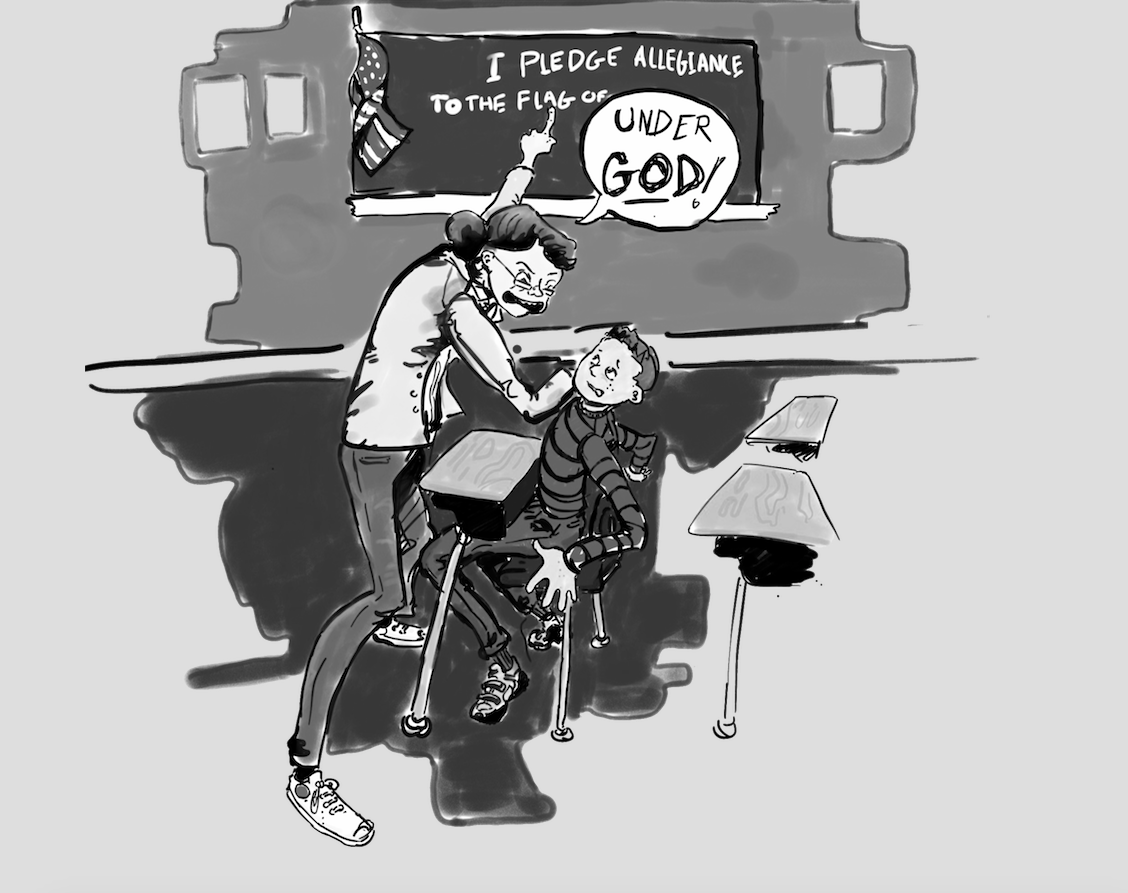 Let’s have someone start us off with the Pledge of Allegiance. Josh, how about you start us off?” It is not a question so much as an instruction.

It is Tuesday morning in the middle of Mr. Bungarden’s lecture in second period Advanced Placement US History, and we are learning about the Pledge of Allegiance. The whole class stands with our hands over our hearts, waiting expectantly to hear our classmate recite the beginnings of the pledge we all know so well.

“Do I have to?” comes Josh’s reply. Mr. Bungarden stops mid-step, taken aback.

“Do you not want to?” he inquires. Josh tells him that he doesn’t, and Mr. Bungarden asks someone else.

Like most other children in America, I recited the Pledge of Allegiance nearly every day in elementary school. Each morning, the whole class stood up at our teacher’s instruction, and chorused “I pledge allegiance to the flag…” Many of us partook in this daily ritual long before we had any idea what it was that we were pledging allegiance to.

For some time now, especially with prominent figures like Colin Kaepernick protesting institutions such as the national anthem, the issue of free speech has been a point of contention for Americans. For many Americans, the national anthem and Pledge of Allegiance are sacred traditions and to do anything less than stand up and put your hand over your heart is barely short of treason.

For me, the Pledge of Allegiance was little more than a part of our morning routine, just like turning in my homework or reading the daily announcements. I was never taught the meaning or history behind what I was saying; they were just words to me. It was not until the aforementioned day in AP US History, my junior year of high school, that I was finally taught the history behind what I previously hadn’t questioned — that the Pledge of Allegiance was originally drafted as a commercial scheme, and the phrase “under God” was added later, during the 1950s in light of the communist scare. Had I been taught the historical background behind the words sooner, I likely would have had a different reaction to requests to recite them.

It is my belief that one’s willingness — or lack thereof — to partake in the recitation of these institutions is not a representation of one’s love for or loyalty to this country. Refusal to recite the Pledge of Allegiance does not make one less American; rather, it is a choice that exercises the very American right of free speech. Just as people should not be forced to repeat something that they do not agree with, children should not be forced to recite something in that they do not understand.

Many might argue that the Pledge of Allegiance is simply an act of respect for this country and what it stands for. I disagree. To make young, impressionable children recite a pledge without properly educating them on what they are saying is blind indoctrination, and is a form of disrespect to cherished American ideals, the values that this country was built on.

I have the utmost respect for this country and all that it stands for, in theory, but I also know that the idealistic America that asks me to pledge of allegiance is fictional. It is not the America, at least right now, that really exists, and it is my right, and the right of all other Americans, to refuse to recite the Pledge of Allegiance if we so desire.   v