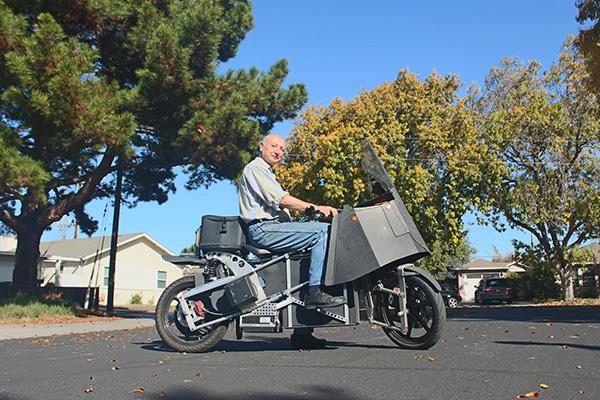 “This is a 130-mile-an-hour machine,” Schneeveis says, grinning as he affectionately rests his hand atop his motorcycle. “Zero-to-60 in under four seconds.”

Schneeveis’s custom motorcycle is a testament to his extensive fabrication experience and age-old desire for excitement.

“My goal in life when I was your age was to get as much air-fuel mixture into an engine as fast as possible and to get it out the other end with efficiency being no concern whatsoever,” Schneeveis says, recalling his adolescent experiences with homemade race vehicles.

Since then, Schneeveis, now 69-years-old, has pushed and continues to push the envelope. With the same vigor that inspired his high school racing career, Schneeveis has shifted his focus from going fast to going green, pioneering the world of homebrewed electric transportation.

In an age when Priuses zoom around every street corner, an electric vehicle may not seem particularly out of the ordinary, yet Schneeveis brings a new take on the technology. Applying creative and often unorthodox methods to his designs, Schneeveis has created an exciting world of innovation far removed from the underwhelming image often associated with electric vehicles and environmentalism.

“15 years ago, I got thinking along the lines of, ‘If wheels are so damn good, how come you don’t see them in nature?’” Schneeveis says, describing his opinion of current transportation technology. “If you’re a Darwin kind of guy, you know that if it’s not good then it’s not going to last. And we’ve got everything but wheels. If you’re along the creationism line, God doesn’t build garbage, and God didn’t put a wheel on a damn thing.”

Consistent with his unique vision of transportation, Schneeveis has created an array of walking electric vehicles, including a six-legged horse and a chariot driven by a humanoid robot.

Schneeveis’s unique background has contributed to his visionary character, which finds its roots in his childhood struggles and past occupations. Growing up, Schneeveis lived in a poor, rural town in central Wisconsin and spent his days working in his dad’s auto-shop.

“My dad, well, I didn’t really consider him a father figure,” Schneeveis says. “He was a boss. He taught me to weld when I was about eight years old, and when I was 12, I could weld overhead and do vertical stick welds.”

Schneeveis also led a difficult academic life. As a dyslexic highschooler in the ‘60s, a period during which dyslexia was not yet recognized as a learning disability, Schneeveis found it difficult to apply himself.

“The only reason I ever got out of high school was because no teacher ever wanted to see me around again,” Schneeveis says. “I couldn’t even fill out an application to get into university, so the state sent me off to a two year trade school to learn to be a machinist.”

After high school, life threw yet another surprise at Schneeveis.

“We had wonderful opportunities offered to us, as kids getting out of high school: an all-expense-paid-trip to far away, exotic lands,” Schneeveis says. “Vietnam.”

Despite losing time to the Vietnam War and struggling with his dyslexia, Schneeveis led an impressive career. After flying a rescue helicopter for the United States Coast Guard, he worked on motion simulation systems for guided missiles and later at the Stanford Linear Accelerator Center. Today, though able to retire, Schneeveis is employed as a Science and Engineering Associate in Stanford’s neurology department, where he invents and fabricates precision equiptment for neurology studies.

“Are you familiar with the size of a fruit fly?” Schneeveis says, prefacing some of his work at Stanford. “A fruit fly needs to sit with its head leaned over and the back of its skull opened up so we can look into the back of its brain with a two-photon laser microscope … That’s what I do; I work in the land of the little.”

Schneeveis’s technical knowledge gained from his unique occupations has translated to his remarkable electric vehicles. All hand-crafted, Schneeveis’s creations range from the elegant to a robotic George Bush. However, while his vehicles vary in appearance, they are all products of the same underlying philosophy: preserving the environment and inspiring creation in others.

“I worked for a while making things that would kill people — war equipment,” Schneeveis says. “I finally had my fill with it and went into medical research. Took a cut in pay — don’t regret it. Do something that you think is good for you and for the country as a whole. Enlightening, uplifting projects that stress your creativity, your resourcefulness, to the limit.”

Consistent with his making philosophy, Schneeveis has worked for years to innovate in the electric vehicle industry. Striving to bring the convoluted but rewarding world of alternative transportation to the individual’s domain, Schneeveis continues to work relentlessly at his goals.

“Spend some time with your eyes closed, kicking back and dreaming of what you would like to create,” Schneeveis says. “If it doesn’t work, don’t get discouraged. After a while, you’re going to run out of things that don’t work. If you don’t give up.”