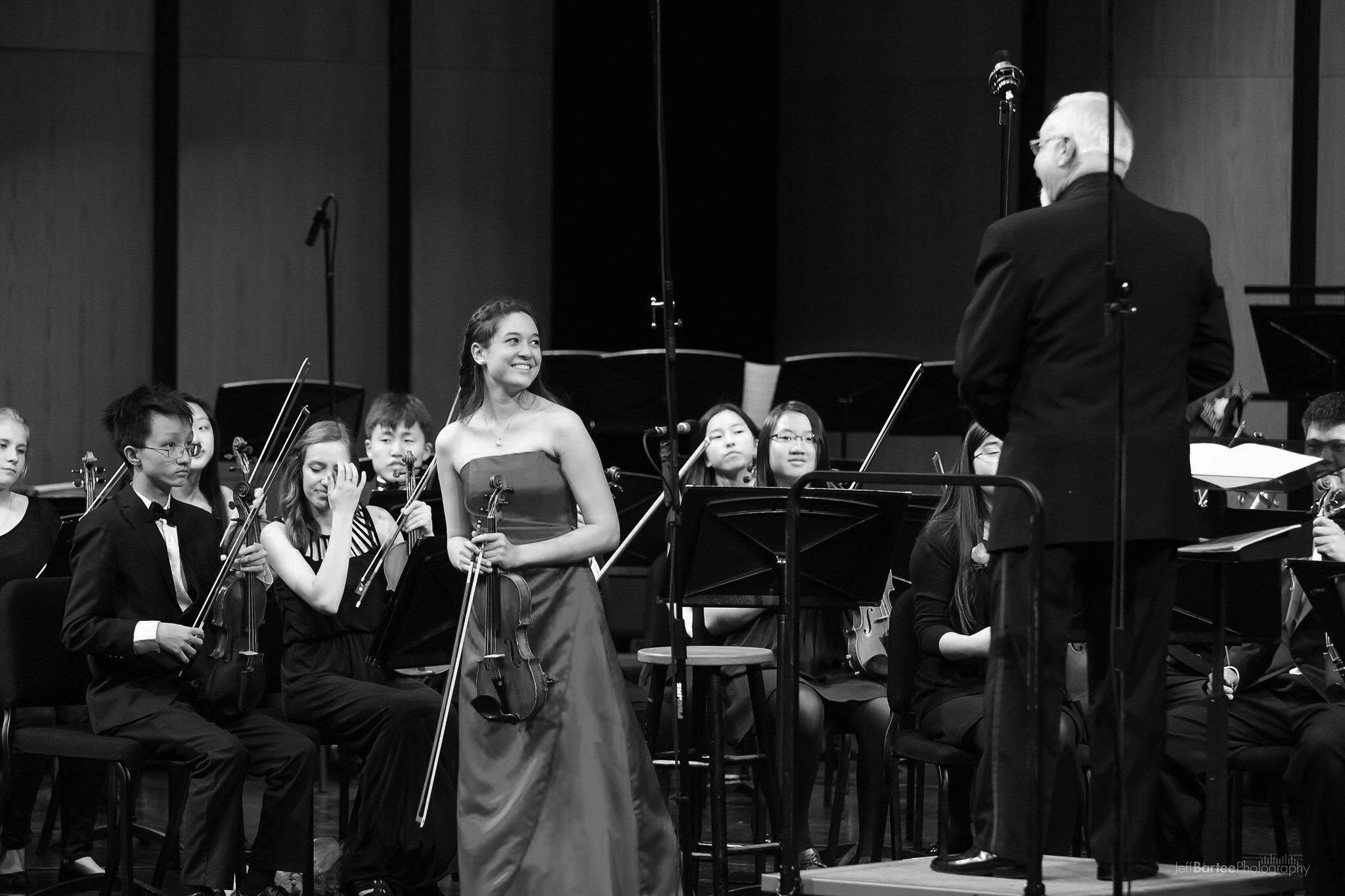 A Misunderstood Malady: a Teen’s Battle with Ehlers-Danlos Syndrome

The photo taken a year ago of Leanne Miron at her violin performance with the Peninsula Youth Orchestra showed her at her best — she’d dazzled the audience with a spectacular rendition of the third movement of Mozart’s Violin Concerto No. 5, and her form-fitting, strapless crimson gown drew much attention as well.

But the significance of the dress extended beyond its beauty — its floor-length nature concealed her feet, which were bare for better balance. And then there was the stool positioned behind her, which had not served a purpose in the performance, but was there in case Miron needed to sit down — a preparatory measure for the solo violinist who had blacked out during her dress rehearsal. The performance marked the end — or what she hopes to be a temporary pause — of the former Palo Alto High School student’s violin career, which was cut short due to grievous health concerns.

Currently senior at the Lucile Packard Children’s Hospital School at Stanford, Miron has a severe case of the hypermobile type of Ehlers Danlos Syndrome, a rare, inherited category of disorders that affects the joints, skin, and connective tissue, as well as postural orthostatic tachycardia syndrome and mast cell activation syndrome. From the age of 11, when she first exhibited symptoms, Miron has suffered in every aspect of her life due to EDS, POTS and MCAS.

“I lost the function of my legs,” Miron says of her condition in April 2014. “I lost muscle, sensation in my stomach, except for severe nausea that was persistent. … I had all four limbs that weren’t working.”

After she re-coordinated her muscles in an intense pain rehab program during the summer of 2014, Miron reached a point where she was able to exhibit the image of being “normal,” despite the fact that all the underlying issues remained and interfered with her daily life — she was able to practice violin, but intense pain in her arm limited her from practicing for more than five minutes at a time. Because the symptoms of her condition were not always self-evident in interactions with others, Miron was often misunderstood or dismissed by peers, teachers and even doctors.

“[Doctors said] ‘There’s no way this could be happening. You’re making this up,’” Miron says. “They thought my parents were either doing something to poison me, or make me think that things were going wrong. I saw a neurologist who said … I could walk on my toes across the room with no pain and no issue, when I tried to stand up and collapsed.”

Miron recalls a conversation with her P.E. teacher, to whom she had tried to ex

In spite of the pain and exhaustion, Miron refused to give up violin. In 2013, she began working with her teachers to practice more effectively.

“I couldn’t spend four hours a day practicing,” Miron says. “I had to learn how to practice differently. I would [tell myself], ‘For five minutes, I’m going to work on this section, and here’s how…to break it down.’”

The restructured mindset increased the quality of practice and drew admiration

from her peers, who were impressed with

her self-control and driven nature. Despite these changes, Miron was not reaping the benefits of her hard work.

“It was really frustrating,” Miron says. “I was practicing really well, but because it was so sparse, I was falling behind where I wanted to be.”

A victory in her orchestra’s concerto

competition allowed her moderate gratification for her hard work and an opportunity to perform solo; however, Miron blacked out during her dress rehearsal and was unable to finish. Fortunately, Miron performed successfully when the time came and greatly enjoyed the experience.

“I was barefoot in order to balance better,” Miron says. “Especially then, I was having a hard time standing. I had a tall stool behind me for the performance, in case I needed to sit down. I’m really happy I didn’t need it.”

The solo performance, however, marked the temporary end of her musical journey. Chronic dislocations in her shoulder and hip joints eventually put violin out of the question.

Although her inability to play violin has taken an emotional toll, Miron draws comfort from the companionship of her service dog, Moo, who has been a source of happiness in the midst of her challenges.

“My [service] dog is amazing,” Miron says. “She’s totally turned my life around in terms of feeling capable, and she helps me so much. I feel like I’m capable of something because I take care of her; she relies on me.”

Moo’s presence alone serves as an indication of her health condition to those who may not be aware, and it also provides an opportunity to spread awareness for illnesses and disabilities that are not self-evident.

“I love when I get asked by kids; they’re genuinely curious,” Miron says. “A lot of times I’ll explain…‘Have you ever seen a blind person with a dog? The dog acts like their eyes. My dog acts as my arms and my back, because she carries and picks things up for me. With people caring and asking, it gives me more hope.”

Fighting for a future

Despite her growing hope, Miron still grapples with the reality of her situation, which includes working with a team of 20+ regular doctors and juggling a minimum of ten appointments each week.

“I have chronic pain, which I’m always going to have,” Miron says. “I have acute pain from dislocations and subluxations. I have neurological issues that may or may not go away as I get older. The biggest thing I’m working on is acceptance.”

This acceptance derives from reconciling herself with her unique identity. Miron knows that her distinctive trials are inevitable, and is focused on equipping herself to confront them physically and emotionally.

“I have a lot of limitations, and it takes

longer for me to do things,” Miron says. “I’m probably not going to graduate college in four years, which I’m okay with. I’m not going to be music major, which I really wanted to be.”

Despite all the negative consequences that have arisen from her battle with EDS, Miron strives to adopt a more optimistic outlook on her situation and future.

“I’m much more driven to learn,” Miron says. “I’m going to school not because I have to, but because I want to be at school. What I’ve gained most is being really self-motivated and driven.”