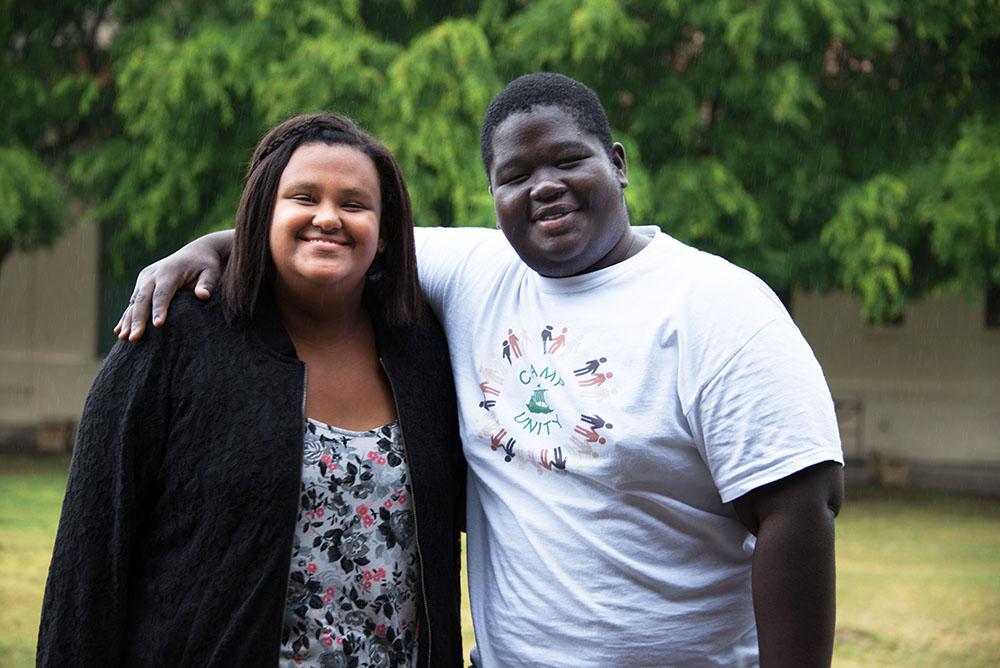 A Heart Connection Is Deeper Than Blood

Erickson Valentine stands by a podium at Jane Lathrop Stanford Middle School’s graduation ceremony. His sixth grade teacher Rebecca Cogswell hands him a trophy and announces Erickson as a recipient of the Stanford Cup, the middle school’s highest form of recognition, awarded to only two outstanding students in each graduating class.

“He is focused on self-improvement and always strives to be the very best version of himself,” Cogswell announces to hundreds sitting in the audience. “No obstacle ever stands in his way. Simply put, Erickson is a beam of sunshine.”

Now a sophomore at Palo Alto High School, Erickson is the kind of person others describe as exuding life — a boisterous showman who is caring but playful, always knowing when to and when not to liven up a conversation with a well-timed quip.

Life wasn’t always this way for Erickson. Erickson was born in Haiti with clubfoot, a birth deformity that caused his foot to perpetually turn inwards and made him unable to walk. According to his adoptive mother Julie Valentine, it was so expensive to treat that his birth parents could never afford treatment. But even as a child, Erickson exuded so much charisma that in a serendipitous moment of serendipity, a tourist who noticed his foot condition offered to pay for his surgery in full. Erickson was two.

Shortly afterwards, his birth mother placed him in an orphanage in the hopes of keeping him safe from his abusive step-father. She paid him regular visits until he was adopted at age 7 by Julie, a vocal coach by profession who had already adopted two girls from Ethiopia and whose work in helping children with clubfoot led her to Erickson.

“I was working with an organization that was doing different kinds of special needs kids’ services in different countries,” she says. “I was looking for a child to use these [foot] braces that we had found — and that was Erickson. When I saw his picture, I was like, ‘Oh my god, he’s so cute!’ … There was something about him that I was like, ‘I guess I’m adopting one more time!’”

Since then, Erickson has lived in Palo Alto for more than 10 years with his sisters Madison, now 22, and Paly senior Amber, who were both adopted from Ethiopia but are not biologically related. Now, when Erickson affectionately calls his family a “crazy mix,” he’s referring to his Irish-American mother Julie, his two Ethiopian older sisters, and his four dogs Dandy, Cocoa, Cuddles and Budsy.

The story of the Valentines’ lives spans two continents and four families, and has touched the lives of many from Ethiopia, Haiti and their home in Palo Alto. 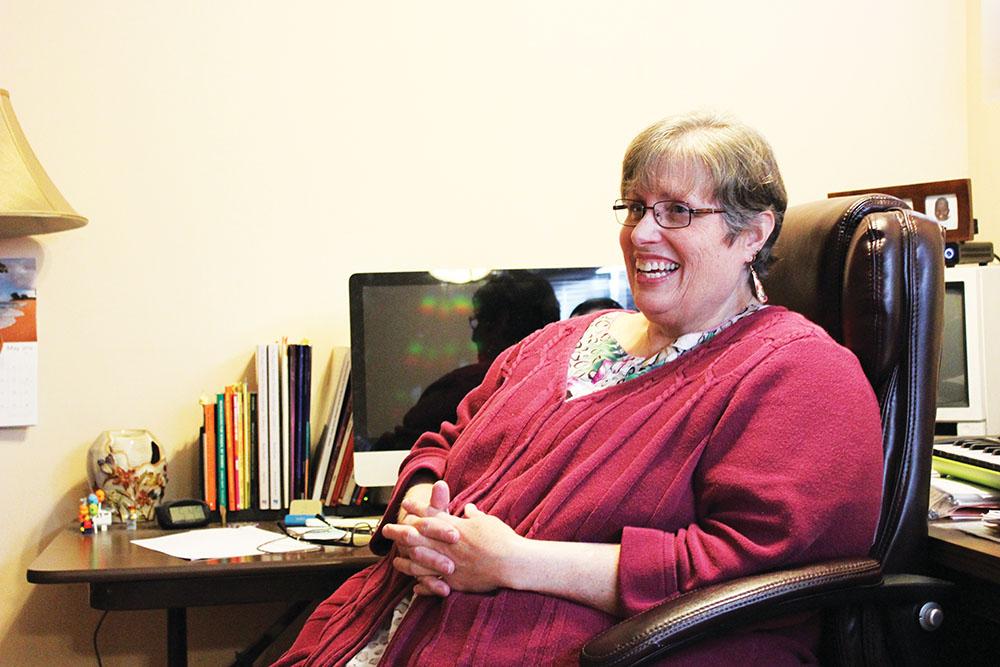 Julie Valentine sits in her home office, where she provides vocal coaching for her students, who range from Stanford professors to high school students.

A Present that Keeps on Giving

Life in the Valentine household is in many ways just like every other. Yet, every now and then, outsiders who speak up about their interracial background serve as a reminder of the adoption.

“Everywhere we go there’s this big sign saying ‘we’re adopted,’” Julie says. “People will ask you all kinds of personal questions, like ‘Are they really sisters?’ So I would come up with these snarky comebacks, like ‘They look real to me.’”

As time has passed, their family dynamics have transformed.

“Now, the hilarious thing is, I’m older and my oldest daughter, Madison, is an EMT,” Julie laughs. “She’s often in uniform, so when people see us together, they now think she’s my caregiver — they used to think I was her nanny.”

Julie describes her family as closer than most, and notes that having adopted children comes with its own set of perks.

“Parents sometimes have this idea of what their kids should be, based on ‘Your grandmother is a doctor, and so I am a doctor, and you will be a doctor,’” Julie says. “But when you have adopted kids, you have absolutely no idea what their aptitude is, because you don’t have that preconceived idea of what everyone in the family does. It’s kind of fun — it’s like a present that you keep getting to open, to find out who they are and what they want and where their skills are.”

The Birth of the Adoption

Julie’s inspiration to adopt children from Africa came from her childhood travels with her father, who volunteered in the Peace Corps in in the Philippines, Japan and Hong Kong in his time off from teaching at San Jose State University.

“I was 6 going to these places, so that had a really huge impact on me in terms of my worldview,” Julie says. “I traveled all over the world and I saw the great need there was in developing countries. I had always thought I would adopt at some point. Then I never got married, so it just seemed the thing to do.”

When a U.S. federal law that prevented transracial adoptions was reversed in 1997, Julie rushed to adopt her first child. She ultimately chose to adopt through African Cradle, a Bay Area organization dedicated towards facilitating adoptions from countries in Africa.

“I would have been this adoption agency’s first transracial placement,” Julie says. “I came back [home] and there was an email from African Cradle, saying, ‘I have this little girl that just came back and what do you think?’ I was like, ‘Oh my gosh!’ That’s how I chose Madison. I was like, ‘OK, I guess I’m going to Ethiopia.’”

After adopting her second child, Julie named her after Amber Stime, the founder of African Cradle, whose pioneer work in creating the first American adoption center in Africa has resulted almost a hundred adoptions each year.

“I’m a firm believer that you don’t have to be related by blood to love someone,”  Stime tells Verde. “That’s just a fallacy; families can come in many ways. As a proof for that, I have two sons who are adopted and my third one is my biological, and I feel the same about all of them — it comes from the heart and not a blood connection.”

Now, to embrace the old and welcome the new, each year the Valentine family celebrates Homecoming Day for each sibling, which marks the day of their adoption.

“It’s funny to say, ‘Today’s my Homecoming!’ to someone, and they’re like, ‘The dance?’” Amber Valentine laughs. “We would go out to dinner with our cousins, and they’d give us cards, and then we’d open presents.”

When the siblings were first adopted, their transition from the orphanage to the Valentine household was not without its obstacles.

“With all adopted kids, there is a certain amount of bonding that has to happen … and certain amount of loss that they experience that needs to be addressed,” Julie says. “With Madison, we played peekaboo when she was way too old to be playing peekaboo, to give her that attachment.”

When Erickson came to Palo Alto at 7 years old, Julie recalls that he spoke very little English and his lack of attachment manifested in the form of disruptive behavior. This continued until his elementary school principal, who happened to be from the Dominican Republic and spoke his language, scolded him in his native Creole.

Ten years after his adoption, Erickson jokes that the only sign that he didn’t grow up speaking English is that he can’t pronounce the word “specific,” and instead says “pacific.” Now considered a model student, Erickson still keeps in touch with his birth mother through monthly phone conversations. Due to the language barrier, as Erickson has lost his Creole and his birth mother speaks no English, the conversations mainly consist of laughter.

“We talk to her on the phone, although we can’t communicate,” Julie says. “We giggle at her and she giggles back.”

Although they now talk regularly,  in 2010, when an earthquake hit Haiti and the Valentines were unable to contact Erickson’s mother, Erickson went a whole year without knowing whether his birth mom was dead or alive. When she finally called back a year later, they learned that she had lost her cellphone in the earthquake and was unable to afford a new one.

Stories like this serve as a reminder for Julie and Stime of what life is like in Haiti, motivating them to find homes for more international children in America.

Passing on the Heritage

In 1997, after adopting Madison and Amber, Julie founded a website where she organized adoption resources, which has now facilitated thousands of transracial adoptions. Julie founded Adopting.com during what she refers to as the “dark ages” of the Internet — when the bank manager didn’t understand why there was a period in her company’s name, and repeatedly insisted that she meant to register instead for ‘Adopting Com.’

“Now we have Google,” Julie laughs. “But [back then] if you were looking for adoption, you were kind of stabbing around in the dark…. I helped place kids for adoption, and it grew into this whole thing where I lectured on transracial adoption and adoption of special needs kids.”

Beyond her website, Julie helped run an Ethiopian Heritage Camp with Stime for 10 years every summer that attracted over 500 kids at its peak. The heritage camp, which teaches traditional Ethiopian arts and crafts, music and dance, expanded so quickly that they had to move to a bigger campground.

“It started really small with just a handful of kids,” Julie says. “All these [kids] were from transracial families, so it was fun for the kids to be in the majority, because a lot of these kids were growing up in white communities. Especially in the mid ’90s, transracial families were still odd. There was a lot of being looked at, and at camp that didn’t happen.”

Amidst the arts and crafts and traditional Ethiopian coffee ceremonies, the heritage camp also educates parents on about issues of racism.

“With interracial adoptions, we talk about race and discrimination in America,” Stime says. “Of course, the white parents may know about it, but they’ve never lived it. When your family is intertwined, then you’ll start experiencing the racial hatred as well. … Until then, their world has not been challenged, but when they see that and feel the pain of their children, that’s when they start getting active and relating.”

Just as white parents learn what it means to be African, Erickson has discovered what it means to be Ethiopian. Despite that he is not of Ethiopian blood, the heritage camp has become somewhat of a second home for him. There, where the majority of children speak a language that he doesn’t understand, Erickson still uses his sense of humor to win over his fellow campmates.

“The first time we took him [Erickson] there, he had just gotten here six months before and he didn’t know English very well still,” Julie says. “He’s always had this really great sense of humor. …. Abisha is what Ethiopians call themselves, [so when] someone asked him if he was Ethiopian, he said, ‘This weekend, we’re all Abisha.’”