Lush plants spread out like a green ocean across the plot of land sheltered by the Rinconada Library and Community Art Center. Dotted with vibrant flowers, berries, bushes and the occasional scarecrow, the open space is a place for Palo Altans to meet new people and take advantage of the city’s undeveloped land.

Offering plots at around $0.80 per foot with an initial deposit of about $200, the Rinconada Community Garden teems with fruits and vegetables that flourish thanks to the labor and love of local gardeners. Paths unfold like a labyrinth, and each plot labelled with a little sign.

The gardens seem to reflect their owners’ personalities. Some are neatly arranged, every type of vegetable labeled and confined to the plot lines; others let their plants grow in a wild manner, flowers and vines winding together in green tangles that spill out of their allotted spaces and into the walkways.

Verde explored the garden and interviewed some of the caretakers of what seems like one of the last spots in Palo Alto where there is no cement on the ground, only dirt and mulch.

Finding your roots (Plot 11A) 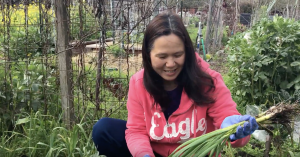 IDYLLIC GARLIC Yanling Wang holds up garlic she just dug up. She was inspired to get her plot when she visited California and saw the gardens. “California has great weather,” says Yanling Wang. “The soil is very good.” Photo by Devony Hof

Sporting a bright pink jacket and even brighter smile, former Palo Alto High School parent Yanling Wang roots around in the dark soil with a shovel to dig up small spring garlic bulbs that she insisted on giving us to bring home to our families.

Her face lights up as she talks about what the garden community means to her.

“People grow all of these things,” she says. “When people touch the soil, it makes them happy.”

Wang has grown a large variety of fruits and vegetables since she first bought her plot three years ago, ranging from swiss chard to blackberries to a tree that brings up memories from her childhood.

“When I was a young child, my grandmother let me eat leaves from this very special tree. When I came here, I couldn’t find it,” Wang explains. “I found it in a nursery, so I planted it here right away.”

“[I’ve] met all different people from all different backgrounds [at the garden,]” Wang says. “They all grow their favorite vegetables … They grow something we cannot find from the market. They grow for their memories … family memories [and] traditions.”

With seeds and knowledge alike shared between gardeners,  Wang says she has observed the selflessness the community garden fosters.

“The neighbors help each other around here,” Wang says. “It is such a joy to share.”

Wang shares the produce she grows with everyone she knows, including us. She  says she even sent veggies to her son’s teachers when he went to Paly.

The produce she doesn’t generously gift to others becomes a part of Wang’s daily meals.

“I eat most of what I grow,” says Wang. “I never waste anything.”

From the family tree (Plot 9A) 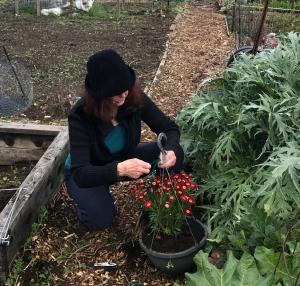 BERRY BUSY Sheila M. searches for twine under an arch whose lattice structure supports marionberry vines. “It [the marrionberry vine] looks like hell right now,” Sheila says. “But it has these delicious blackberry-like fruits.” Photo by Devony Hof

Sheila M. delicately hangs a pot of bright red flowers to a pole that casts shade over the leafy artichokes below. Complete with a border of abalone shells and winding blue and yellow stepping stones, Sheila’s garden is her own little world — one she has curated for 15 years.

As she takes us on a tour through the raspberries, zucchinis and other assorted fruits and vegetables that occupy Plot 9A, Sheila, who grew up in Britain, points out her prized red currants, “a very British thing” rarely found in American markets.

Sheila attributes her affinity for gardening to her family’s roots.

“I guess I come from a gardening family — my parents had a garden,” she says. “It’s in my blood.”

For her family, gardening was not only a hobby but an obligation. Sheila says that when she was growing up in wartime England, her family owned a victory garden, a vegetable garden planted at an individual’s home to increase food production during the World Wars.

“To grow your own vegetables was considered almost a civic duty,” Sheila says.

Now, Sheila uses her space at the garden to carry on this family tradition by growing crops for herself and close friends. She makes jam with her own raspberries and tends to some of the shared plots, remaining an active member of the gardening community.

“There’s always something to do here,” she says. 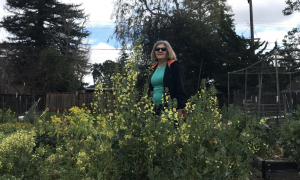 BERRY BUSY Sheila M. searches for twine under an arch whose lattice structure supports marionberry vines. “It [the marrionberry vine] looks like hell right now,” Sheila says. “But it has these delicious blackberry-like fruits.” Photo by Devony Hof

Hair swinging in front of her face, Ellen Brown bends double and pulls fistfuls of bright green weeds from her family’s plots.

According to Ellen, the Brown family involvement at the Rinconada Community Garden has enabled them to forge close friendships with many other gardeners. She says her husband is the one most invested in their shared gardening space, and tells us about how he has grown to know other gardeners.

The relationships he has made are more than just cordial, she says — the friends will even check on one another during hard times.

“People have gotten sick, he [her husband] has visited them in the hospital,” says Brown. “They’ll water each other’s plots.”

Like Wang and Sheila, Brown values being able to incorporate homegrown produce into her family’s diet, especially during the summer when all their produce comes from their plot.