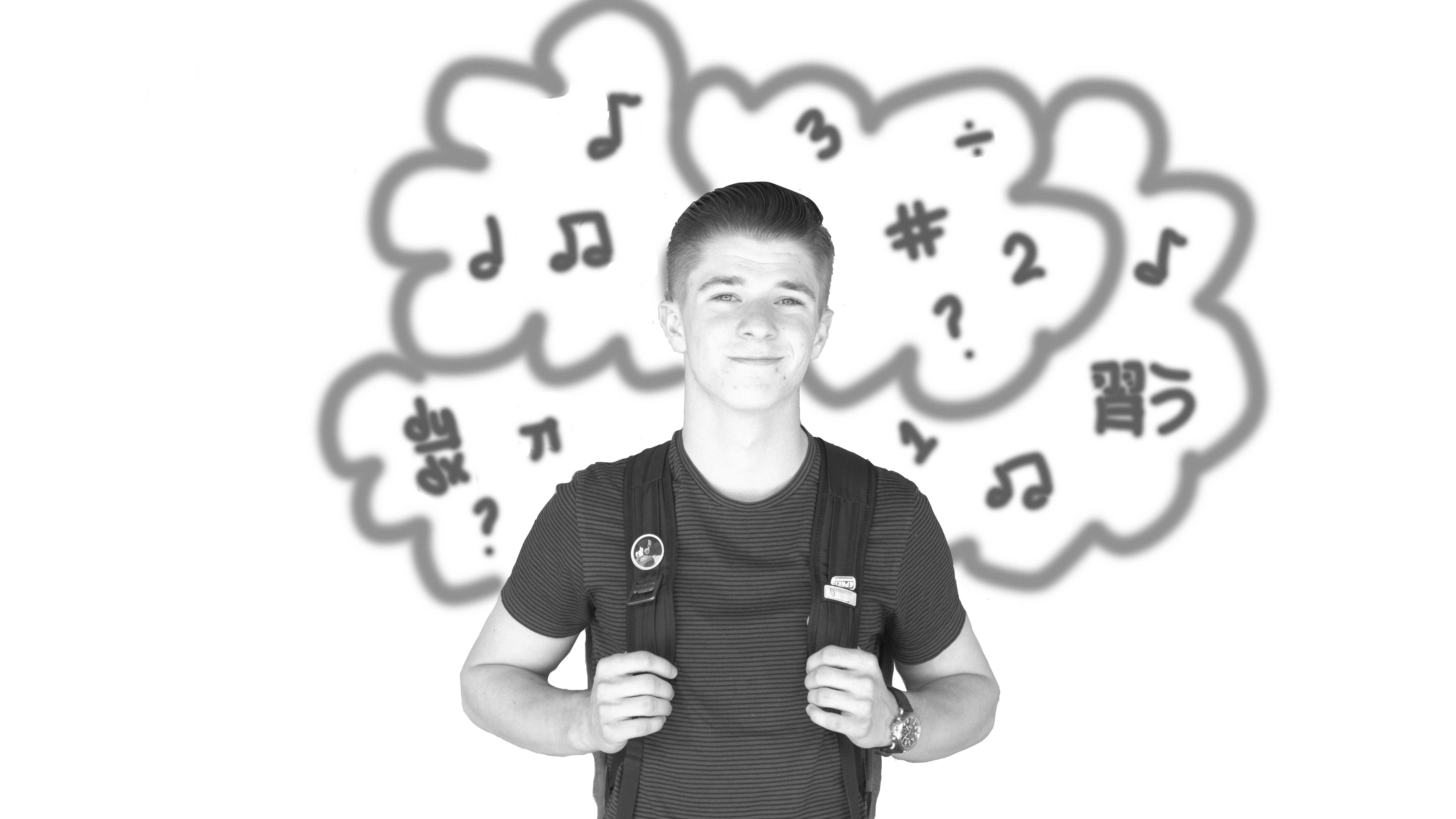 Homeschooled senior Marshall Williams gets to explore many different subjects in his education. "If you like academic rigor, it's a lot easier to pile it on," he says. Photo by Kobi Johnsson. Art by Devony Hof

A different education: Homeschoolers reflect on their experiences

Grades. Clubs. Prom. Class schedules. Sports. Spirit rallies. All these things are hallmarks of the high school experience. But many teens in the Bay Area attain their education without these supplements. According to a 2016 survey conducted by the National Center of Education, about 3 percent of students reported being homeschooled, a percentage, which, when applied to Palo Alto, suggests about 400 students in the city. The term homeschooling encompasses many forms of teaching, from parent teachers to so-called “unschooling” to outsourced private tutoring. Some students start homeschooling to avoid stresses and burdens associated with public school, while others do so to pursue a particular career. To learn more about homeschooling in Palo Alto and the Bay Area we interviewed three local homeschooled students. Here is what we found.

Before starting at Menlo-Atherton High School as a freshman, Winnifred Blair was homeschooled, along with her five siblings. Blair described her form of homeschooling as “unschooling,” in which, according to the online education site Time4Learning, the student’s parents do not play traditional teacher roles but rather allow “student’s interests and curiosities to drive the path of learning” as opposed to a designated curriculum.

Blair’s nontraditional education consisted of staying at grade level in math and being proficient in reading – all for the purpose of fulfilling her mother’s expectation of being a “capable and beneficial member of society.”

“I think that homeschooling is really good if a traditional school environment does not work,” Blair states in email. “It [homeschooling] is also good, I’ve found, for people with really specific interests that can be better accommodated.”

According to Blair, her mother thought that going to public school or homeschool would not make a difference to her education at the elementary level. This assessment, combined with a younger sister’s health problems at the time, contributed to her parents’ decision to homeschool their children.

“We always had the option to go to school,” Blair states. “If any of us had ever shown a strong interest in it at any point, we would have immediately been enrolled … There was never a question of if I was capable of going to school.”

“I think that homeschooling is really good if a traditional school environment does not work.”

Before she entered the eighth grade, Blair and her mother began discussing the steps she would need to take to attend university. They agreed that going to a public high school would be the best option to prepare her for this.

“My mother was concerned about how the first semester/year [of high school] would go, but I did fine,” Blair states. “It was relatively terrifying because everyone had more of an idea of what was happening.”

Integrating into the public school system after having been homeschooled for 10 years made Blair feel disadvantaged in the areas of essay writing and math.

“It is a bit easier to fall behind in subjects [in homeschooling] if you don’t have a specific interest in them,” Blair states.

By the end of the semester, however, Blair stated that she felt ready to confront any new challenges that came her way.

“I loved my first set of finals,” she stated. “… I had mostly figured out how to do it, and had given up on being overly worried about the new things that kept on getting thrown at me.”

As her thirteen-year-old younger sister begins to decide whether or not she will attend a public high school as she did, Blair reflects on the two learning environments she has experienced.

“Basically I believe it’s a person to person decision for which one [formal or homeschooling] would be better,” Blair states. “And in my case, they happened to be the same.”

“I didn’t really want to deal with Paly’s stress anymore because I play a lot of tennis and I’m trying to play Division 1 in college,” Page says. “I didn’t really get much time to play or sleep and I just wasn’t very happy.”

While Page found freshman year manageable, sophomore year made balancing tennis and schoolwork increasingly difficult. According to Page, this issue was further compounded by Paly’s lack of provided accommodations for serious student athletes.

“I know a lot of my friends get out at 12 or don’t have to do PE so they can get a public education and play tennis,” Page says. “Since I’ve been homeschooled I’ve gotten a lot better. It was just really frustrating because when I was at Paly I knew I wasn’t playing at my full potential.”

Page reached a turning point during fall of sophomore year when she lost a tournament with only a few points to spare.

“That whole week I had so many tests,” Page says.  “I was like ‘maybe if I had an hour more of sleep or an hour more of practice’ … it was just so frustrating and I was like how many more of these am I going to have in the future?”

At the start of the spring semester, Page made the independent decision to start homeschooling.

“I actually feel like it [homeschooling] is a great education.”

Like Blair, Page’s form of homeschooling doesn’t involve parents taking on a teaching role. Instead, she takes courses online at Laurel Springs, a K-12 online private school, which provides Page with much more flexibility.

“If you have a really busy day and don’t do school you don’t get penalized,” Page says. “It’s sort of at your own pace.”

While Laurel Springs doesn’t offer specialized classes, such as glass blowing and broadcast journalsim, that Paly does, and there are fewer opportunities for social interaction, Page prefers her new form of schooling.

“I actually feel like it’s a great education,” Page says. “I was afraid that I was going to be a little lonely but I don’t feel that way at all.”

Marshall Williams’ stint in public school only lasted for a week of first grade before his parents decided to pull him and his sister out of school. After being taught by his mother for the duration of elementary school, he decided to enroll in The Potter’s School, an online academy, in sixth grade.

“The Potter’s School … is like a middle school and a high school combined,” Williams says. “I can take classes just like any normal school. For example, the first history class I had was U.S. History Through Film.”

“I didn’t go to Paly because … I’m already used to the [homeschooling] system, and I like it, and it works well for me,” Williams says. “With homeschooling, you have a lot more freedom in how you plan your day, because my classes are on a weekly schedule.”

A main concern that Williams had was over college-preparedness, and its non-traditional schooling would leave him as prepared for college as a public school would.

“I thought about that long and hard … but my whole system is set up pretty much like a college schedule,” Williams says. “I manage my own time and stuff like that. And so I’ve learned that, for example, since I don’t have classes today, I could sleep all day, but I have homework to do.”

“With homeschooling, you have a lot more freedom in how you plan your day.”

Williams continued with homeschooling for the rest of high school, and believes it really paid off when he discovered his passion for mechanical and aerospace engineering. The wide selection of classes offered at The Potter’s School allowed him to indulge his passions, and helped him gain unique experiences that he never would have had if he stayed in public school.

“I’ve taken mechanical engineering classes, I’ve taken Computer Aided Drafting classes, … I’m currently in electrical engineering,” Williams says. “I could pursue them [my interests] here [The Potter’s School]. And then last year, I had an internship at a machine shop.  I was able to have an internship, learning engineering stuff in the middle of the school year while I was in school, and that was just huge for me.”

Williams, who will be attending Georgia Tech for aerospace engineering in the fall, has had no regrets attending The Potter’s School, and believes that it is this flexibility that allows self-motivated students to indulge in their interests.

“I can take electrical engineering, Japanese, French. I can take piano, guitar, mandolin,” Williams says. “If you like academic rigor, it’s a lot easier to pile it on.  You can add more classes more easily. … If you have decent time management, then you could really benefit from it.”