A Community Within a Community 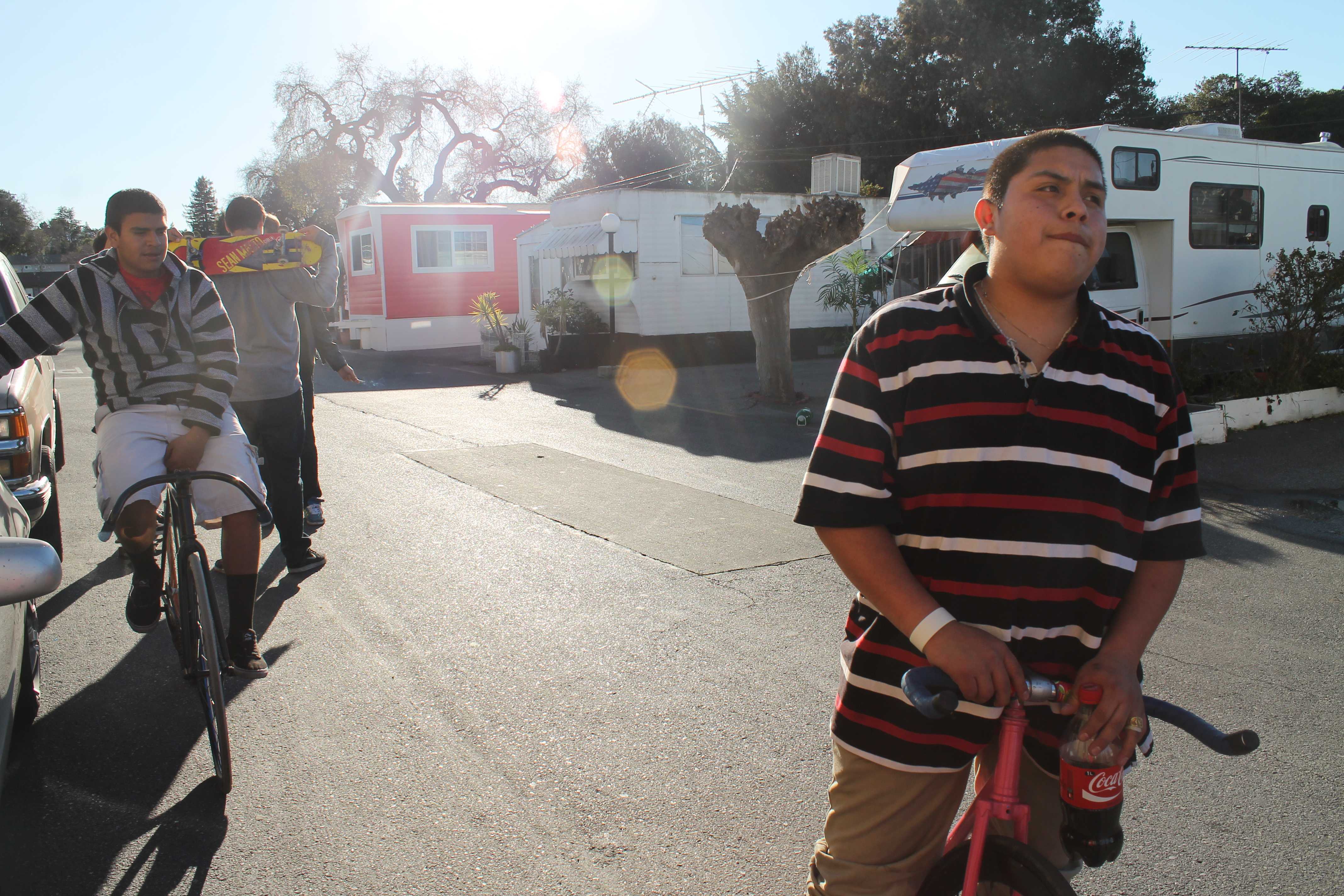 George Resendaz has lived in Buena Vista for the past six years and is currently a junior at Gunn High School.

Along the narrow streets that circle the Buena Vista Mobile Park, a pair of young children race in and out of the small spaces between trailer homes. Some of the trailers have had their wheels removed and sit atop cement blocks, while others are only supported by pavement. A couple has just finished washing their car as a group of teenagers ride past on bikes and settle behind a Baja Fresh, joking about the things that were said in their classes earlier that day. A street vendor pushes his cart across the parking lot, past the vibrantly painted trailers with Christmas decorations still hanging, past the American flag that flies proudly just above a 49ers pennant, and finally stops. As the sun sets, the neighborhood seems to come alive.

For 91 years, Barron Park’s Buena Vista Mobile Park, located near Gunn High School, has offered residents a less expensive means to live in a city as famous for its opportunities as for its high cost of living. But all this could change, as a result of the planned redevelopment of the mobile park by the Prometheus Real Estate Group, which would deprive the children that call Buena Vista home of the education that living in Palo Alto grants them.

Buena Vista Mobile Park offers affordable housing from $800 to $1,300 a month while the average rental in in Palo Alto has a monthly cost of around $2,767. Replacing the mobile park with high-end condominiums would displace the more than 375 citizens living in the area and force them to leave Palo Alto in search of more affordable living.

“They say they are going to tell us [where to go] after we leave,” Buena Vista resident, George Resendaz, says. “After everyone gets kicked out.”

Resendaz has lived at the mobile home park for the past six years and is now a junior at Gunn High School. Much of his family lives in the park as well, among them are his two sisters, niece, brother-in-law and parents.

The proposed plans set forth by Prometheus are not yet final, but the mobile park will be closed once the City of Palo Alto reaches an agreement with a real estate company.

The owners of the mobile park, Joe and Tim Jisser, notified the residents of their plan to sell the park in September and have been working with Prometheus in an attempt to redevelop the area. The company plans to build 180 high-end condominiums that will be leased for around $1882 to $5196 per month, a much steeper price than the stationary trailers in the building site now. Closing the mobile park would virtually eliminate low-income housing in this area of Palo Alto.

“If you’re a developer, you’re going to make what people are willing to pay for,” Lynnie Melena, head of the Barron Park Association, says. “But there should be more options for low income residents.”

Melena, a resident of Palo Alto for over 40 years, has seen the area gradually change. From a small town to an international tech center, Palo Alto has experienced drastic change. With the availability of jobs in the technology sector came an influx of workers who wanted to live nearby, she says.

“There are a lot of young techies moving here to live near their jobs,” Melena says. “They were in Mountain View and now they are coming to Palo Alto to find jobs.”

The new homes that are to replace the mobile park would be targeted at mostly single, young people earning high wages. This change in demographic would decrease the number of children attending Palo Alto schools, Melena says. 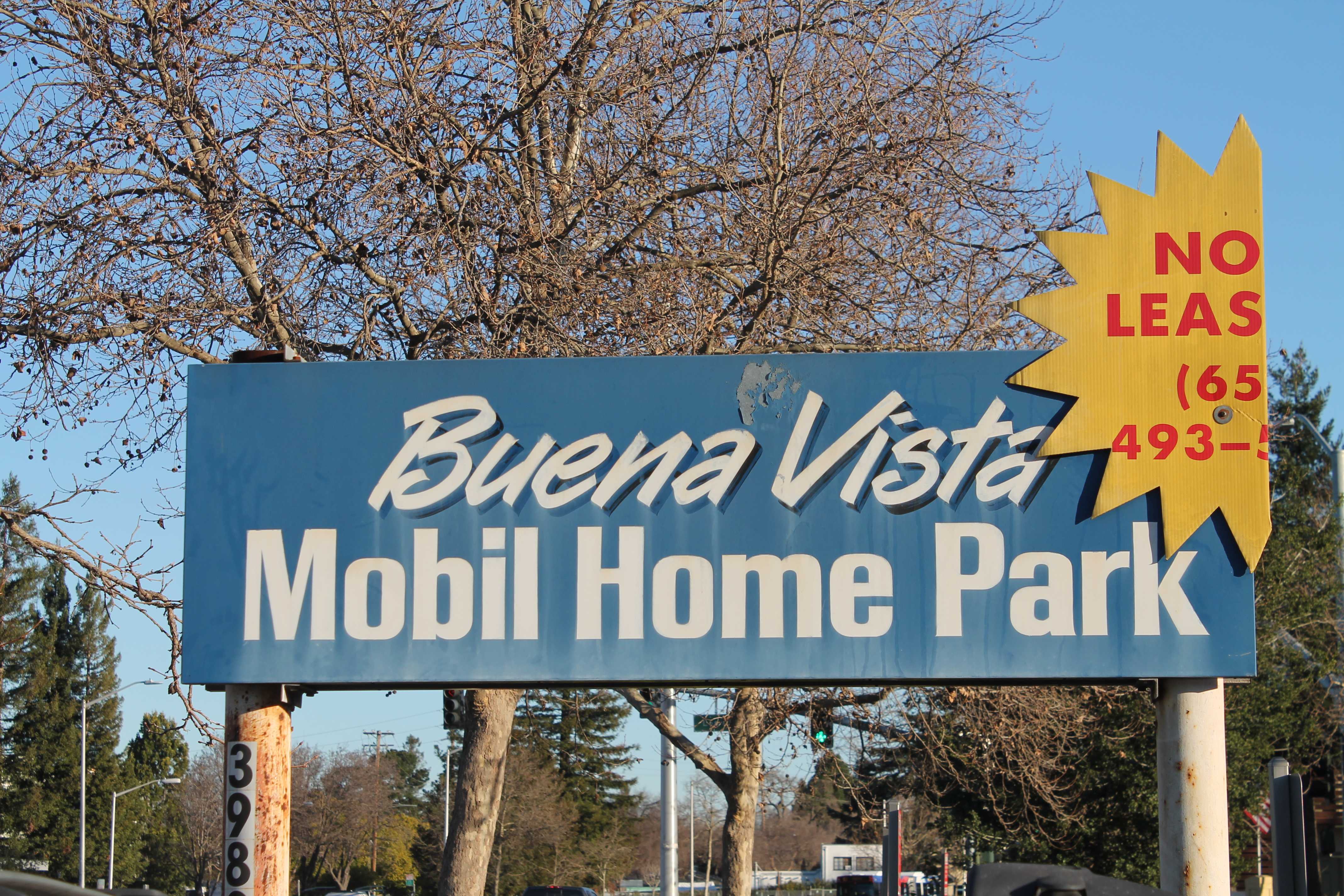 The Buena Vista Mobile Home Park has provided affordable housing in Palo Alto for the past 91 years.

Residents of Buena Vista make up 12 percent of the student population at Barron Park Elementary School, while 22 individuals attend Terman and 29 attend Gunn High School. Despite the compensation Buena Vista residents would receive, it is unlikely that they will be able to afford to continue to live in Palo Alto, or maintain their children’s access to the level of education offered by its school system.

“There are options for keeping our [Buena Vista] students in our schools,” vice president of advocacy for the Palo Alto PTA Council, Nancy Krop says. “Whether through another entity purchasing the land and preserving Buena Vista as a mobile home park or a developer purchasing the land, and developing it to include affordable housing for current residents and new homes for new residents.”

Krop has worked with the PTA to advocate for students across the district, promoting the needs of students living in Buena Vista and working to preserve the diversity of the local schools.

Prometheus was scheduled to appear before the City Council in December to discuss its plans with the community, but the company opted not to in December and failed to attend in January 2013 as well. It has also did not attend a planned meeting with the Barron Park Association earlier in February.

“I think it’s pretty apparent that [Prometheus is] going to let Mr. Jisser close the park and they are going to keep their hands clean of this incredibly messy business,” Winter Dellenbach, former fair-housing attorney, says. “As soon as it get farther along we assume that they will reappear on the scene and proceed with the process.”

Many families who live in the mobile park have lived in the neighborhood for multiple generations and remain to this day.

“A lot of people at Buena Vista have lived here for decades, they’ve lived here a long time,” Dellenbach says. “Here they are living in Palo Alto, part of a neighborhood, and suddenly they look up and they are being told that everything is at risk.”

Ordinance No. 4696, adopted by the Palo Alto City Council in 2001, lays out the procedure that must be followed if the park sold and preparing to close. This includes an obligatory relocation payment to every resident that is moving from the park in case of closure. This money is intended to allow the residents to relocate, ideally, near the area in which they had originally resided. Unfortunately, this is not necessarily the case for the residents of Buena Vista.

“There are a lot of families here and this is all they can afford, so moving is harder, for my parents too,” Gunn freshman and resident of six years, Kiwi Whitehead says. “My dad just got laid off and it’s even harder, it’s harder to find a place to stay. They are moving us to new apartments, which is good, but they are a little more expensive, so that means more parents are going to have to work extra hours and the kids are going to be home alone.” 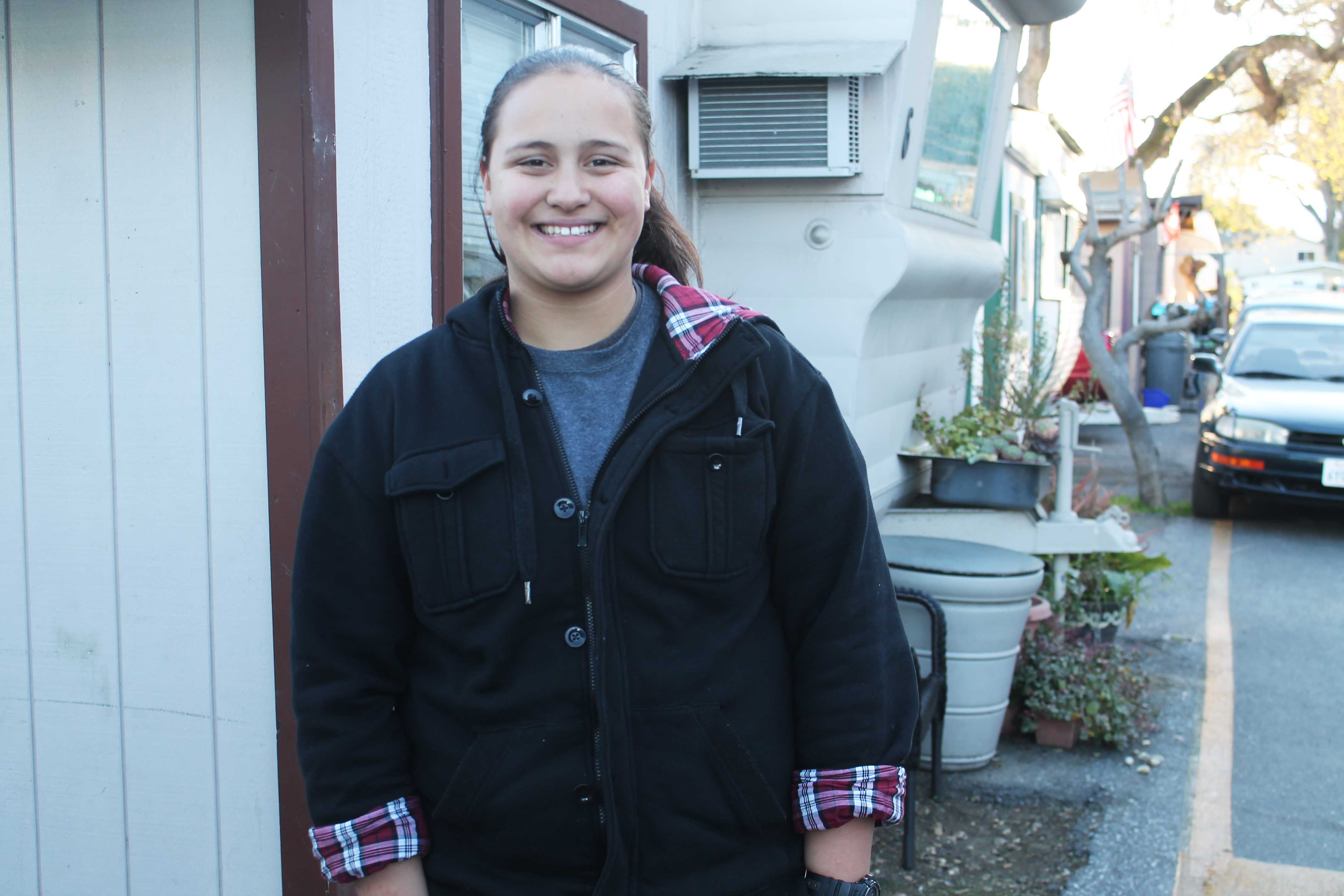 Kiwi Whitehead and her family have lived at the mobile park for the past six years, her father was recently laid off from his job. She is a freshman at Gunn High School.

The residents will most likely not have to leave their homes until after the city and the Jissers have come to an agreement over what will be done with the site after the mobile park is closed.

“Where to go is the biggest issue,” Gina Espino, who has been living at the park for 16 years, says. “There’s going to be a lot of people, there’s going to be a big impact on the economy because we don’t make a lot of money, but it’s hand and mouth so everything goes right out to the nearest vendors.”

The real estate company has also come forth to say that they do not plan on adding any affordable housing units to accommodate the current residents, despite claims of having an excess of $4 billion assets and control of 20,000 housing units in California and others in Washington and Oregon. The company might, however, provide money to the relocation effort.

“If this all goes through as the owner and as Prometheus Real Estate Group had planned, it would be the largest dislocation and loss of Palo Altans in our city’s history,” Dellenbach says. “Bigger that the Japanese internment, bigger than when 103 houses were torn down to put in Oregon Expressway.”

The community has responded to the proposed closing of the mobile park by forming advocacy groups for the residents and speaking out in favor of the park. Residents of Buena Vista spoke for their home during a City Council meeting and demonstrated the diversity within the small tight knit community.

“When this does go in front of the city council,” Dellenbach says. “Either the closure part or the redevelopment part, we need to bring the community out, we need to fill out the chambers.” 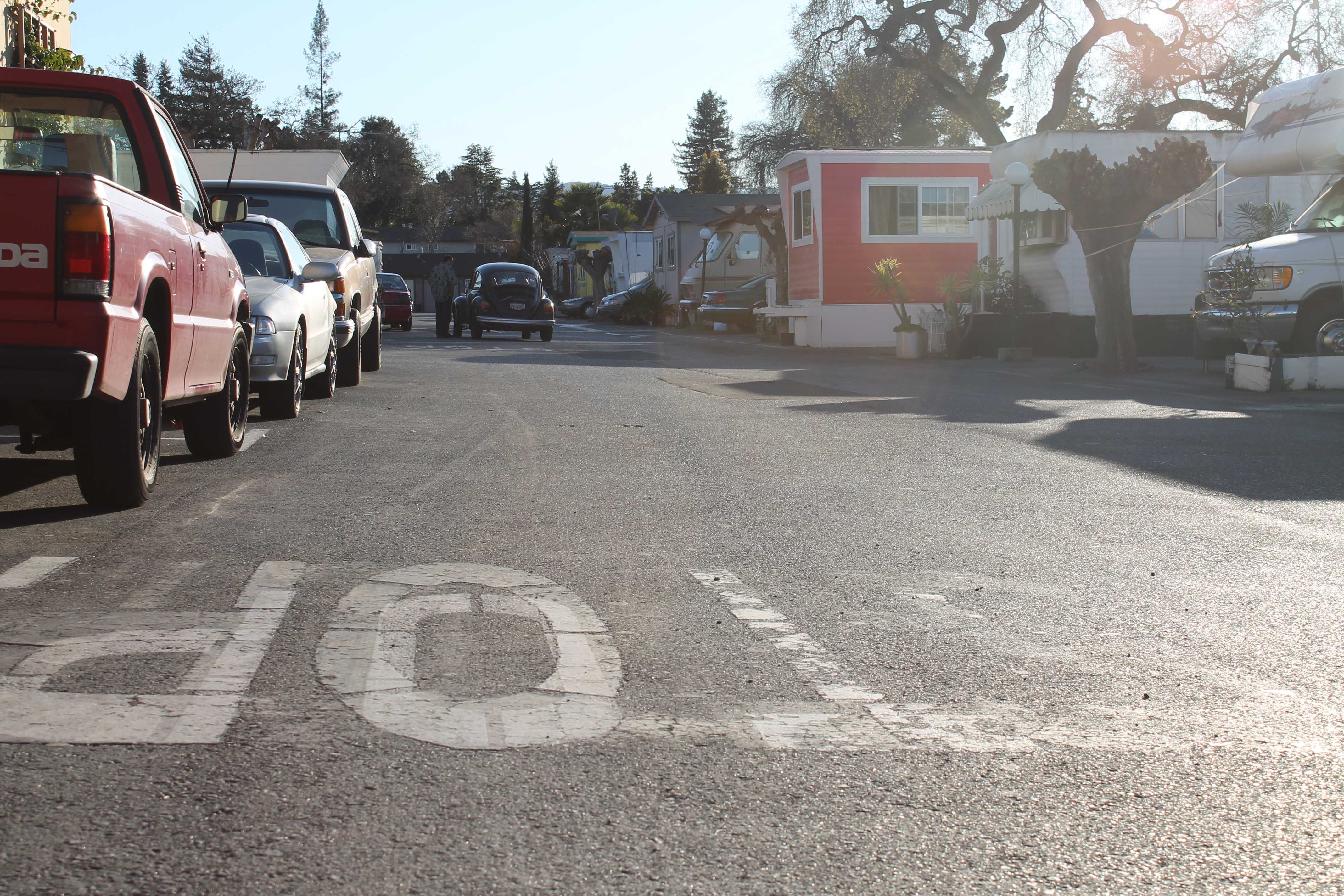 On the main street of the mobile park a car driver stops to talk to a fellow resident.