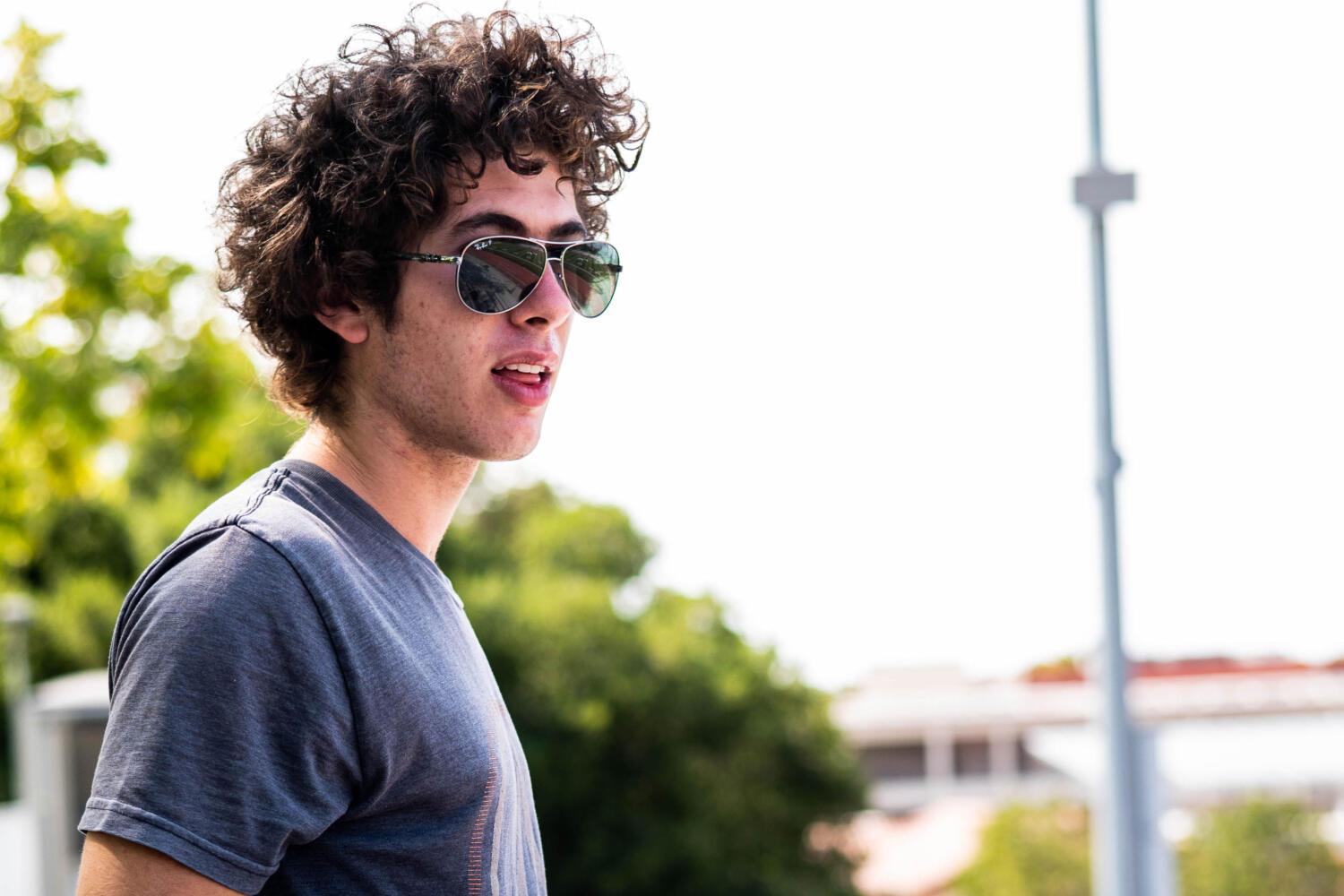 CONTROLLING THE CAR — Paly Junior Owen Kuwayti drove the RC car for 11.5 hours during the attempt to win the Guinness World Record. “At one point my vision was wavy from like staring at like the same spot for a while,“ Kuwayti said. Photo: Ryan Lee

Eleven and a half hours. That is how long junior Owen Kuwayti watched his small remote control car circle the Viking Stadium track — all in pursuit of a Guinness World Record.

In December of 2021, Kuwayti compiled a team of five Palo Alto High School juniors to design and build a remote controlled, or RC, car. Their goal: beat the Guinness World Record for the longest distance traveled by an RC car of 66 miles set by the famous battery company Duracell.

“I thought that sounded kind of crazy,” Kuwayti said. “And then the more I thought about it, the more feasible it seemed.”

First, Kuwayti and his team designed the RC car in computer-aided design.

“We were trying to get as much of our car done as we reasonably could before we had to build it,” Kuwayti said. “And that was mainly because we wanted to do fundraising to actually pay for the project. Having a CAD model that was concrete [would have the sponsors] look at it and say ‘there’s a reasonable chance of them actually building this and doing well.’”

“I thought that sounded kind of crazy. And then the more I thought about it, the more feasible it seemed.”

However, the sponsorships and donations the team received on GoFundMe fell short of their expectations.

Despite these hardships, the team put together a functioning RC car without breaking the bank.

“Even though we didn’t get to make our ideal car, we shifted to doing the minimum that will get this to work,” Kuwayti said. “From there, we threw the whole design out the window, but we went off of a modified version of a car that I actually already had. It was probably one of the worst cars you could have picked for that role.” 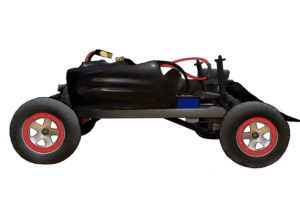 To cut costs, the team resorted to using cheaper materials and makeshift tools, often leading to potential hazards for the car.

“It [the car batteries] blew a hole through the piece of metal we were trying to weld,” Kuwayti said. “So not only was it sketchy, but the welds were not usable because it was so bad.”

Less than a week before the group attempted to beat the world record, the car’s line tracer — a mechanism allowing the car to travel around the track autonomously — stopped functioning, forcing the team to rewire the car and manually drive it with a remote control.

“We didn’t know the reliability of rewiring the car to be driven manually, so we were like ‘Hope this works, we’ve put so much effort into it, and if it doesn’t work, that’s what happens,’” Kuwayti said. “In the end, I sat there [the Paly track] for 11 and a half hours driving it.”

After only a couple of laps around the track during the official run, one of the hubs, a mechanism intended to hold the car’s wheels, broke in half.

“If we had to do it again, there’s so many things we can improve. If we wanted to go further, there’s definitely a path for doing it.”

Luckily, the team was prepared for mishaps like this and quickly replaced the hub with four 3D-printed alternatives they brought to the attempt.

Unfortunately, these replacements also broke within 20 laps, and the team decided to switch out the car’s wheels entirely.

As the team finished the switch, the tool used to take off the wheels, became lodged in the last wheel. At a loss, the team decided to leave the broken tool inside the wheel — the car, with one broken wheel, would have to complete the record attempt in its lopsided state. 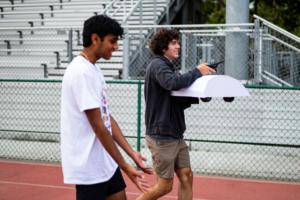 READY, SET, GO — Kuwayti and his team tested their RC car on the Paly Viking Stadium track. “[My team felt] a lot of excitement when we actually got the record,” Kuwayti said. “I felt proud to my family and friends.” Photo: Ryan Lee

“It was extremely stressful,” Kuwayti said. “We had come all this way just to have this one thing, this one little metal tool break in the wheel. I was just thinking ‘I’m gonna make my best attempt at fixing this. I’m not gonna stress out too much. If there’s no way I fix this or if I break something while I’m doing this, at least I made a good attempt at it.’”

Remarkably, this fix proved to be successful, and the RC car traveled 300 laps — equivalent to 75 miles — around the Paly track, broken wheel and all, beating the previous world record by nine miles.

Having set the record distance, Kuwayti and his team submitted their attempt to the Guinness World Records and are waiting for the final certification of their accomplishment.

Kuwayti said while he is proud of his record, he believes he can expand on and improve on his work in the future.

“If we had to do it again, there’s so many things we can improve,” Kuwayti said. “If we wanted to go further, there’s definitely a path for doing it.”