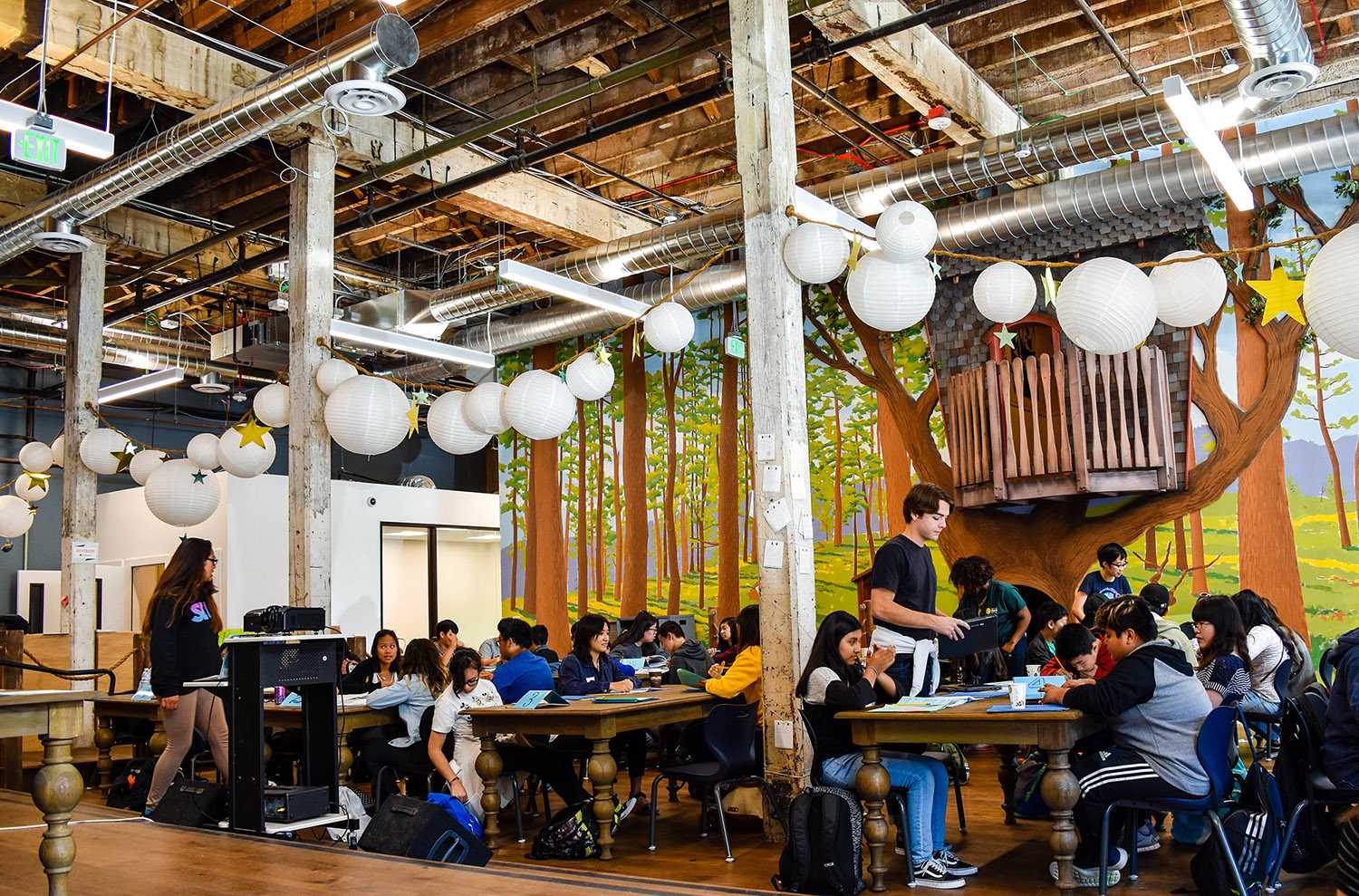 Under a sky of paper lanterns, the watchful eyes of stuffed hog heads and the guidance of volunteer tutors, the achievement gap shrinks with every furious scribble of a pencil, every encouraging word and every student who learns to love writing.

At education nonprofit 826 Valencia’s Tenderloin writing center, San Francisco’s underserved students are transported into another realm as they pour their hearts out on paper. Against the backdrop of a painted forest, tutors coax stories from students who’ve held in too much for too long. If imagination was tangible, it would look like this.

“We try to keep it weird and wonderful. “It’s part of our mission to cultivate wonder. We want to be a portal to imagination.”

On this particular Friday morning, students from Aptos Middle School embark on a podcasting journey. After composing and recording short stories about their heritage, they upload their podcasts to the 826 Valencia Soundcloud, which racks up thousands of listens.

“The writing [that] students are doing is not just living with their teacher and classmates, it’s getting out there,” Wasick says.

Workshops like this are a field study in creativity, vulnerability and the power of writing. These efforts are especially paramount now. Each day, 7,000 students nationwide drop out of high school and the education gap widens, according to the New York Times.

As the country grapples with rampant education disparities and federal budget proposals which threaten education funding, 826 Valencia combats the achievement gap one student at a time. 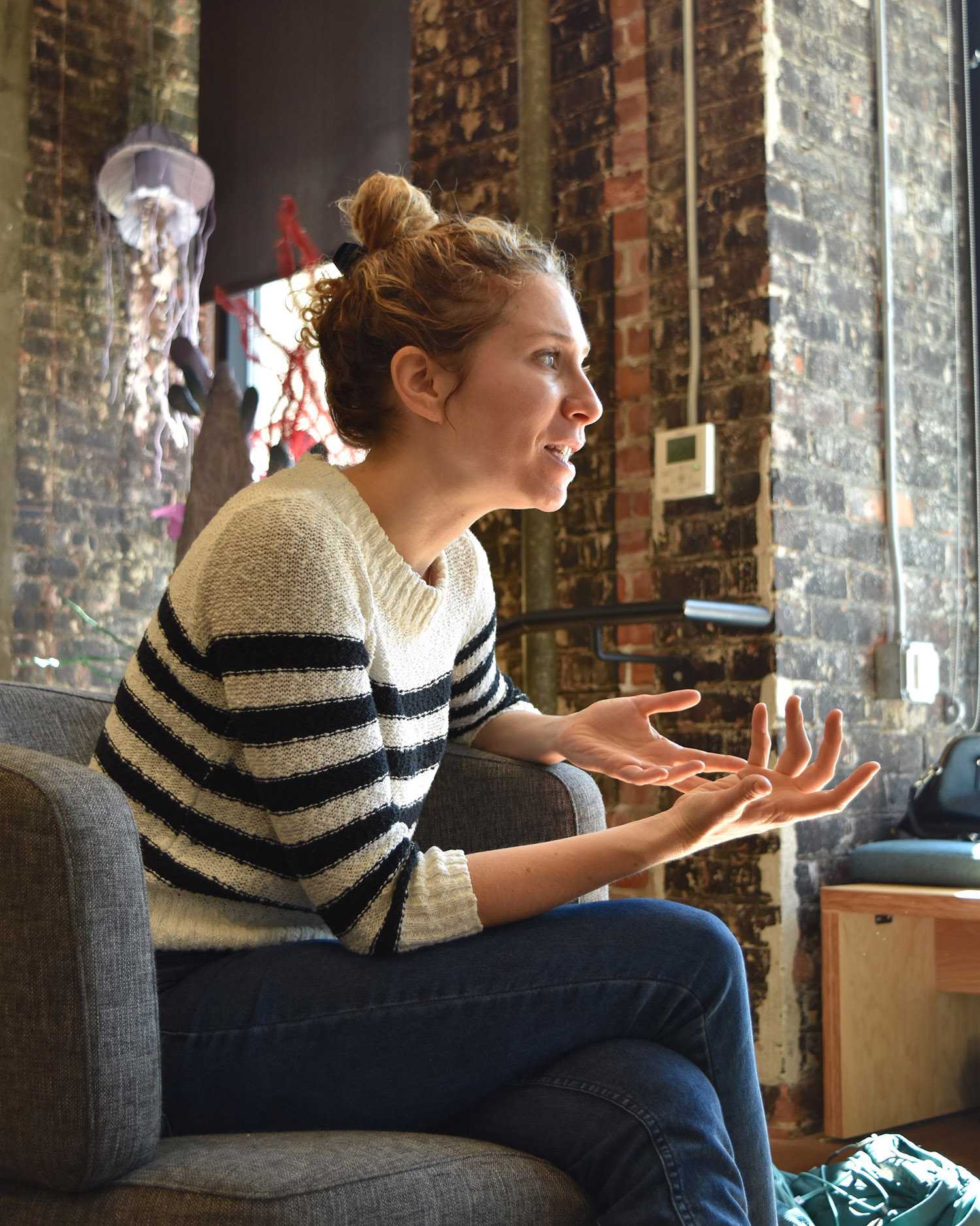 826 Valencia is the brainchild of educator Nínive Calegari and writer Dave Eggers. In 2002, the pair sought to connect San Francisco’s under-resourced students with personalized attention and kindle passions for writing.

Their answer? A cozy writing center nestled in the back of a pirate supply shop at 826 Valencia Street in San Francisco.

Fifteen years later, the organization has expanded from one homely venue into six nationwide chapters and earned recognition from major celebrities like Tom Hanks. It also won a $500,000 grant from Google, which funded the creation of a second writing center at 180 Golden Gate Ave.

“We find that writing is underserved,” says Tenderloin program coordinator Kona Lai. “There are a lot of after-school programs that focus on sports, for example, science, [or] coding, but there’s not much that focuses specifically on writing. That’s part of the reason why we decided to open up in the Tenderloin.”

“It’s terrifying, but also there’s so much possibility,” Lai says. “Every program that we do is totally different from the one that happened before, because it’s never existed before.”

While the center initially struggled to attract students, a year after its opening, it expanded from serving 380 students to 2000 students anually.

Student-produced writing is not confined to the walls of 826 Valencia’s writing centers.

Through uploading student podcasts to Soundcloud and publishing student work in books, 826 Valencia provides students with the platform to reach readers nationally.

“It is very much a sense of pride, especially when students can go, ‘Oh yeah, I’ve been published like six times. My story has been published in this book and this book,’” Lai says. 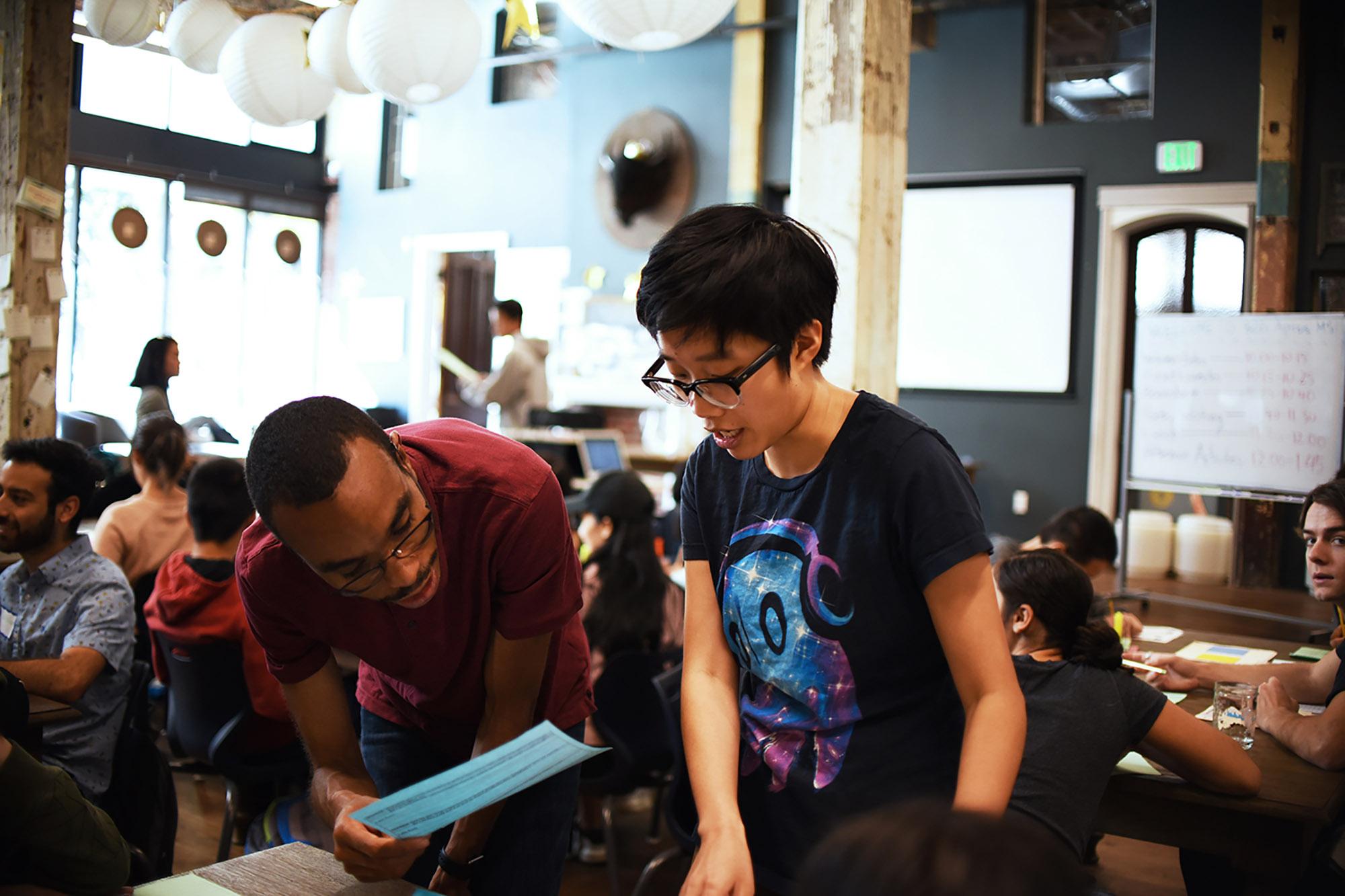 HUSTLE AND BUSTLE Volunteers bounce from table to table as they work with students and prepare materials. Photo by Stephanie Lee.

To Lai, it is this sense of pride and determination that drives both tutors and students at 826 Valencia to persist in their efforts.

“Our goals are to amplify student voices … [and] transform their relationship to writing,” Lai says.

Lai recalls the transformation of a particular student who she watched grow from abhorring to adoring writing as a result of his time at 826 Valencia.

“He was like, ‘I’m not good at writing. I don’t have anything important to say. Writing is hard, it’s difficult and it’s pain,’” Lai says. “He’d be hard-pressed to complete two sentences. If he got two sentences down, I know he worked hard that day.”

After a year of weekly sessions, grueling effort and constant encouragement, the student’s gradual progress finally shone through.

“This year, the first week that he was back, he busted out two entire pages, front and back,” Lai says. “I was just like, ‘Oh my God! What happened?’ Partially, it’s that they’re maturing … But also, they know that when they come to our program, there is [someone] who’s going to be there to help.”

“The books that we publish are a physical, tangible way to show students that we take your ideas seriously,” Lai says. “Here’s the proof, and here is something that you can now shove at other people and show that you’re a published author whose book is out in the world.”

As a volunteer, Monica Bodilla gets to be a firsthand witness to student triumphs and travails.

“This is a really intimate kind of job,” Bodilla says. “We get so many ranges of kids from little second graders who are like, ‘My favorite color is purple’ and a poem about the color purple to the kids who are in remedial high school and have crazy stories about how they got there.” 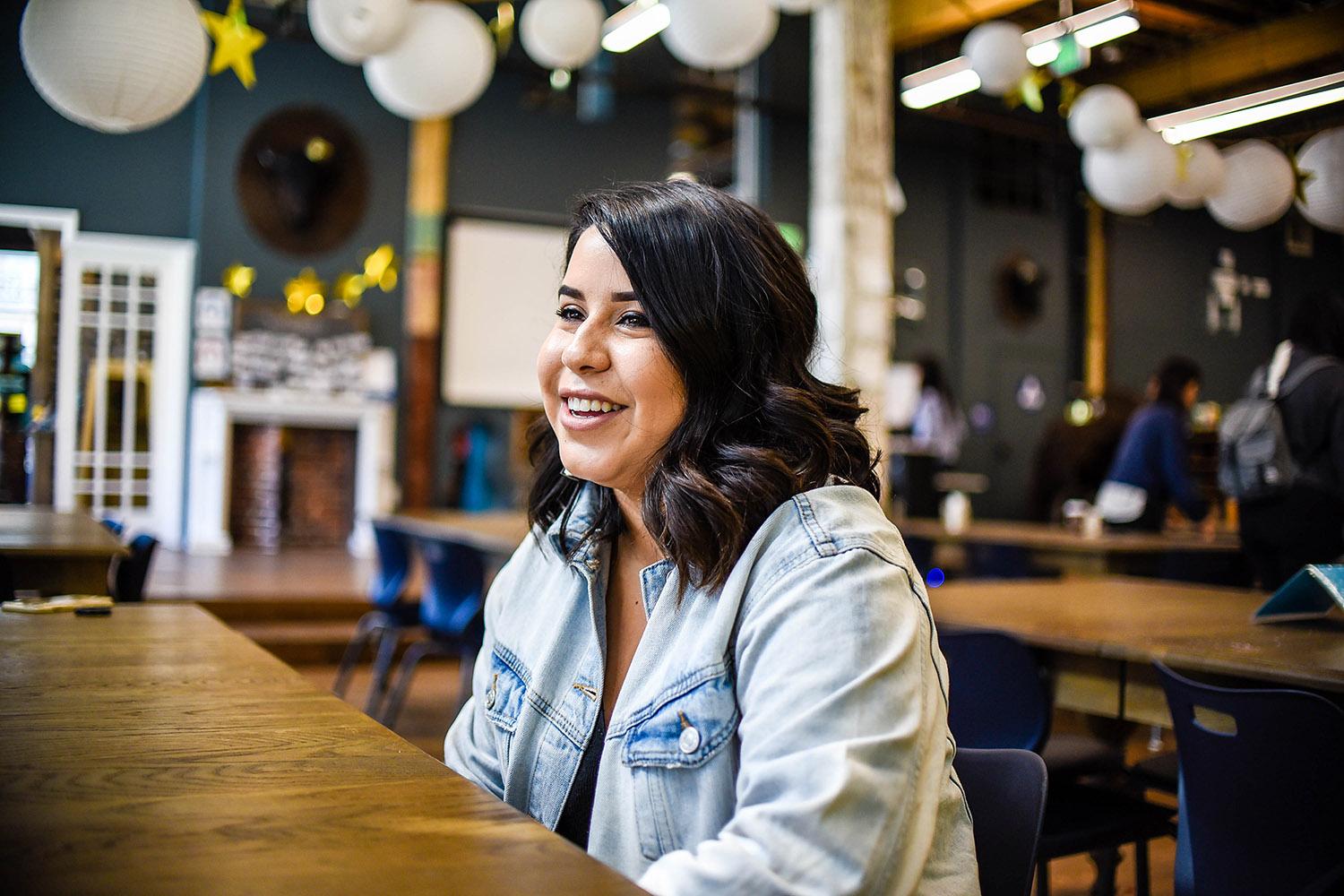 STORY TIME As a volunteer, Monica Bodilla helps students craft stories and share them with the world. Photo by Stephanie Lee.

Beyond teaching mechanical and literary skills, volunteers are there to help students open up in person and on paper.

“We’re always asking ‘How did that make you feel?’ and, ‘What exactly was happening during that moment, what was going through your head? How has this impacted you?’” Bodilla says. “I think that forces them to look inwards on themselves and kind of realize things; it’s very personal for them.”

From the boy with writer’s block who learned to love writing to the silenced students who could finally tell their stories, 826 Valencia channels the creativity of every child and allows them recount their experiences in a safe space.

“Every kid has a story to tell, every kid has a poem they can write about,” Bodilla says. “It’s all about bringing out the story from them.”