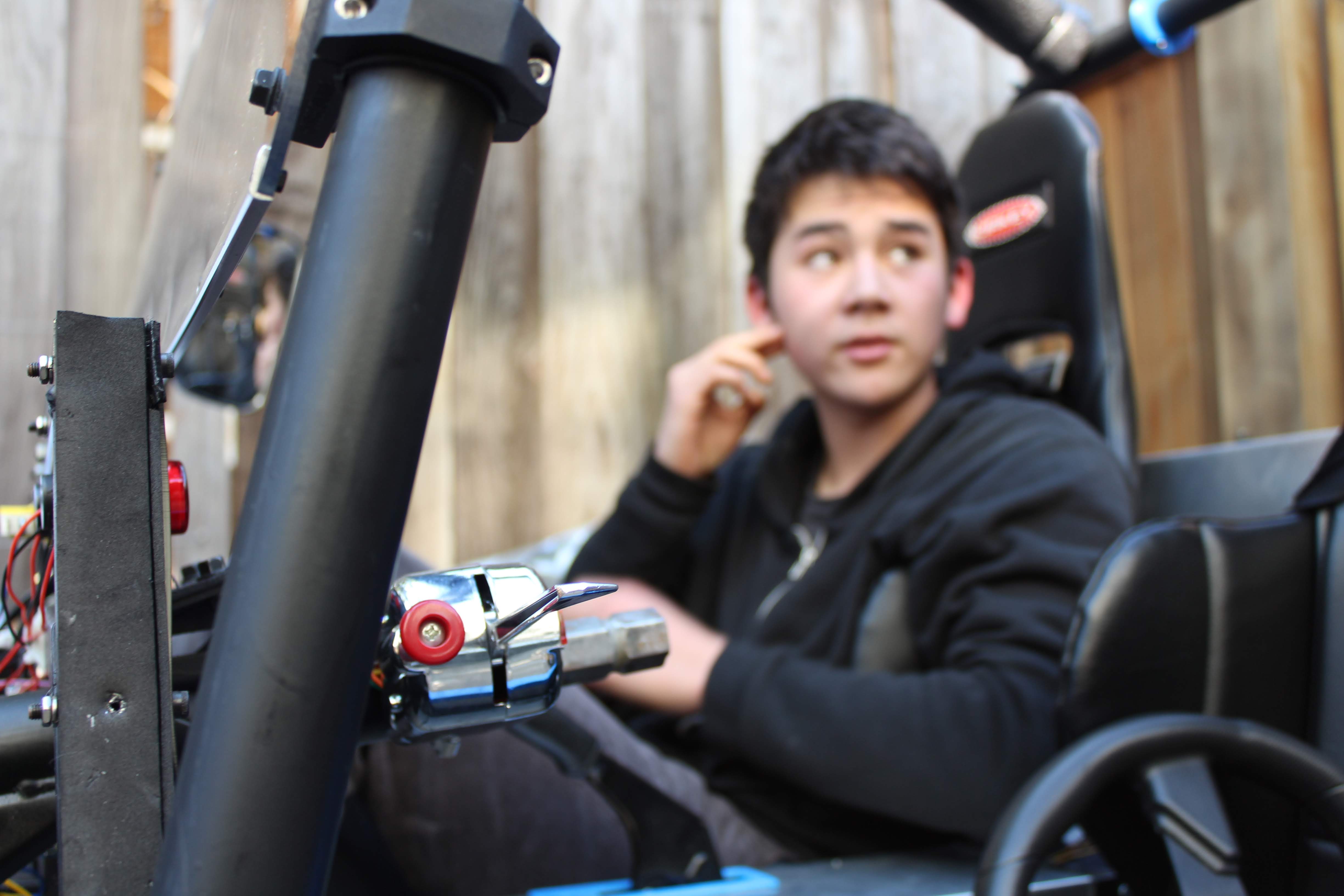 There is a slight smell of burning rubber coming from junior Gray Kim’s car, but that doesn’t worry him at all. There shouldn’t be anything wrong with the car and even if there is, he can just fix it.

After all, Kim is no stranger to the intricacies of automobiles — mechanics have been a part of his life since birth. With his home-made car and self-made robotics team, Kim is jump-starting his future.

Kim’s family garage is perennially full of machines and gadgets — a milling machine sits in the far right corner, while a plasma cutter and welder share a table along the wall. Luckily for him, Kim says, he has had nearly free rein in his mechanical pursuits from a young age. 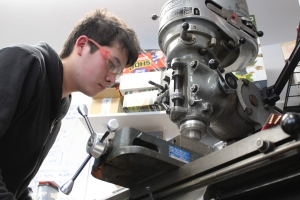 “It [mechanics] just kinda came naturally,” Kim says. “I have a photo of me using a hand drill and I was two or something like that. I drilled a hole in the floor.”

It was Kim’s father who taught him how to use machinery, and they have worked together on projects in their free time ever since. When Kim was in fifth grade, they built a 3D printer from a kit and he also received his first remote controlled car. As Kim modified the car to go faster, his interest in building and designing grew.

Since the 3D printer in fifth grade, Kim has started and completed many projects on his own, taking an interest in mechatronics and specializing in flying quadcopters and drones.

As he dove into the field, the extent to which his dad could help him lessened. In those moments, Kim turned to the Internet for knowledge, surfing YouTube and forums for information about electronics.

“My dad’s taught me a good amount about good habits when you’re designing stuff that’s mechanical but as soon as you get into electrical stuff he doesn’t know much,” Kim says.

Kim particularly enjoys the building process and speed of small drones. Over the years, he’s built six or seven drones and even sold some to his friends. From buying parts on eBay to 3D printing his own designs, Kim now manufactures advanced flying drones with built-in cameras and paired flight goggles entirely on his own.

“I love remote-controlled stuff,” Gray says. “I like it in my free time as a hobby when I’m frustrated.”

In addition to flying contraptions, Kim loves to construct wheeled vehicles. He started building his electric bike in middle school and worked on perfecting the design for around one year. That might seem like forever, but it’s nothing compared to the time he has spent on his car. 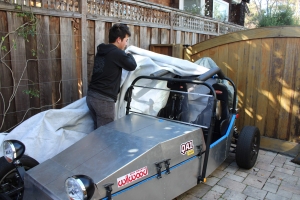 THE BIG REVEAL Gray Kim proudly unveils his newest creation.  According to Kim, the car has been both his favorite and most difficult project. “I probably wouldn’t have started the project knowing how hard it was going to be,” Kim says. 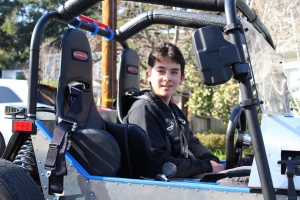 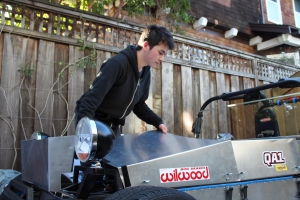 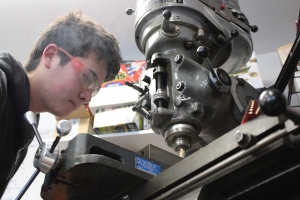 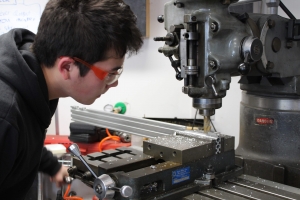 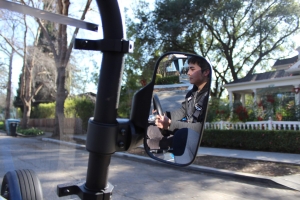 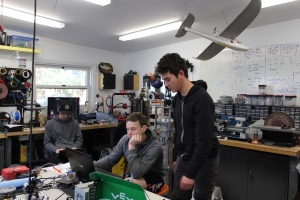 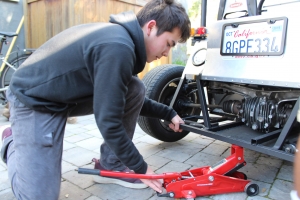 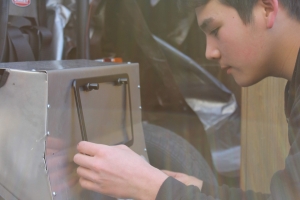 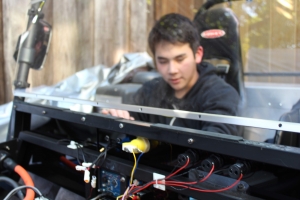 After his electric bike’s success, Kim decided he wanted to go bigger. With the support of his dad, he set his eyes on building a fully-electric car.

“At first I thought: Why don’t I convert one, a Miata or something like that to electric?” Kim says. “Then I was like, it’s not that hard to convert a car and I wanted more of a challenge, so I decided to build one from the ground up instead.”

Along the way, Kim says he discovered many issues he did not know how to tackle. The most difficult of these was when he fell off of his electric bike and injured his wrist, which required surgery.

“That was probably the hardest thing I had to go through because I couldn’t work on the car for half a year,” Kim says.

Because of his injury, the project ultimately lasted two-and-a-half years.

“It was hard to start again after that because I didn’t really feel like I was making progress for a long time,” Kim says. “Then my dad really pushed me to finish it.”

It was this persistence that yielded a fully-finished electric vehicle. Made with a forklift engine and put together in his garage, Kim’s 180-volt Lotus 7 model has been a continuously exciting process.

“Just seeing the wheels on the frame … That was pretty fun to see, even without anything on it,” Kim says.

Though there were many thrilling moments along the way, Kim says his biggest breakthrough came toward the end of the process, when he was able to register the car.

“When I got a VIN [Vehicle Identification Number] and a [license] plate — that was really fun.”

According to Kim, this project allowed him to master skills related to both mechanics and electronics and changed his perspective on conventional cars.

“As far as consumer product goes, it gives me so much respect for a company who designs a phone, or cameras,” Kim says. “It requires so much time to go from R&D [research and development] to prototyping to final production.”

Now Kim participates in a collective R&D of his own. This year, Kim and his friend and fellow junior Quintin Dwight decided to create their own robotics team.

Dubbed “Garage Robotics” after the only location they could set up shop, the crew of 10 competes as a “rookie team” and is currently building a robot that will complete a designated challenge in the First Robotics Competition league.

Despite their small numbers and lack of resources, Garage Robotics is fine-tuning and perfecting a design which will ultimately compete against Paly’s Team 8’s.

“The nice thing about having a small team is when people are closely connected to the robot, they’re willing to help and put more in than the team of, you know, 80 that is kind of disconnected,” Kim says.

But Kim says working in a small group poses its own challenges. Garage Robotics only has nine active members, a

minuscule  number compared to the approximately 80 students on Team 8.

Consequently, each member of Garage Robotics has a critical role in the construction of the robot, which Kim says can naturally be a lot to handle.

“Right now the only person on my design team is me, so it’s been really stressful,” Kim says.

Creating his own robotics team has also allowed him to work with others, unlike his previous solitary projects.

“You learn a lot more when you’re collaborating,” Kim says.

Accelerating into the future

Outside of his personal endeavors, Kim has also explored the world of engineering in a more professional context. Over the summer he interned at a mechanical design and product development company, which offered him a window into the lives of mechanical engineers and real-world applications.

In the future, Kim will continue to pursue mechanics and drive his car when he can. He likes giving short rides to his friends and enjoys the feeling of riding fast through the streets.

“I love driving this thing,” Kim says. “Doesn’t it just put a smile on your face?”